After North Korea agreed in principle to get rid of its nukes, the U.S. continues to ignore its obligation under the NPT to also eliminate its nuclear weapons, as Marjorie Cohn explains.

Given his allegiance to boosting corporate profits, it’s no surprise that Donald Trump is counterbalancing the effects of the Singapore Summit’s steps toward denuclearization with a Nuclear Posture Review that steers the US toward developing leaner and meaner nukes and lowers the threshold for using them.

The United States has allocated $1.7 trillion to streamline our nuclear arsenal, despite having agreed in the Nuclear Non-Proliferation Treaty in 1968 to work toward nuclear disarmament.

Meanwhile, the US maintains a stockpile of 7,000 nuclear weapons, some 900 of them on “hair trigger alert,” according to the Union of Concerned Scientists.

“If weapons are used they need to be replaced,” Brand McMillan, chief investment officer for Commonwealth Financial Network has argued. “That makes war a growth story for these stocks, and one of the big potential growth stories recently has been North Korea. What the agreement does, at least for a while, is take military conflict off the table.”

Moreover, economic incentives surrounding conventional weapons also cut against the promise of peace on the Korean Peninsula. Eric Sirotkin, founder of Lawyers for Demilitarization and Peace in Korea, has pointed out that South Korea is one of the largest importers of conventional weapons from the United States. If North and South Korea achieve “a lasting and stable peace regime on the Korean Peninsula,” as envisioned by the agreement between Trump and Kim Jong Un, the market for US weapons could dry up, according to Sirotkin.

Even so, US defense spending will continue to increase, according to Bloomberg Intelligence aerospace expert George Ferguson. “If North Korea turns from a pariah state to being welcomed in the world community, there are still enough trouble spots that require strong defense spending, supporting revenue and profit growth at prime defense contractors.”

The US Lags Behind on Denuclearization

Last year, more than 120 countries in the UN General Assembly approved the Treaty on the Prohibition of Nuclear Weapons, which requires ratifying countries “never under any circumstances to develop, test, produce, manufacture, otherwise acquire, possess or stockpile nuclear weapons or other nuclear explosive devices.” It also prohibits the transfer of, use of, or threat to use nuclear weapons or nuclear explosive devices.

Since the treaty opened for signature on September 20, 2017, 58 countries have signed and 10 have ratified it. Fifty countries must ratify the treaty for it to enter into force, hopefully in 2019. 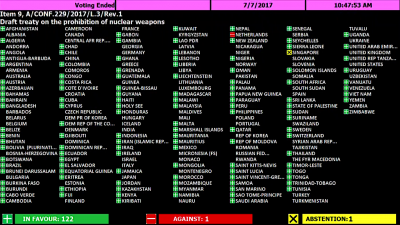 The final General Assembly tally on the treaty to ban nuclear weapons. (Click to enlarge.)

The five original nuclear-armed nations — the United States, Britain, France, Russia and China — boycotted the treaty negotiations and the voting. North Korea, Israel, Pakistan and India, which also have nuclear weapons, refrained from participating in the final vote. During negotiations, in October 2016, North Korea had voted for the treaty.

In advance of the Singapore Summit, dozens of Korean American organizations and allies signed a statement of unity, which says:

“Denuclearization of the Korean Peninsula means not only eliminating North Korea’s nuclear weapons but also denuclearizing the land, air, and seas of the entire peninsula. This is not North Korea’s obligation alone. South Korea and the United States, which has in the past introduced and deployed close to one thousand tactical nuclear weapons in the southern half of the peninsula, also need to take concrete steps to create a nuclear-free peninsula.”

Prospects for a Denuclearized Peninsula

Denuclearization of the Korean Peninsula means not only eliminating North Korea’s nuclear weapons but also denuclearizing the land, air, and seas of the entire peninsula. This is not North Korea’s obligation alone. South Korea and the United States, which has in the past introduced and deployed close to one thousand tactical nuclear weapons in the southern half of the peninsula, also need to take concrete steps to create a nuclear-free peninsula.

The jury is out on whether the statement signed by Trump and Kim after months of hurling incendiary nuclear threats at each other will prevent future nuclear threats and pave the way for global denuclearization.

On April 27, 2018, the Panmunjom Declaration, a momentous agreement between South Korea and North Korea, set the stage for the Singapore Summit. It reads, “The two leaders [of North and South Korea] solemnly declared before the 80 million Korean people and the whole world that there will be no more war on the Korean Peninsula and thus a new era of peace has begun.”

The Trump-Kim statement explicitly reaffirmed the Panmunjom Declaration and said North Korea “commits to work towards complete denuclearization of the Korean Peninsula.”

However, when the summit was in the planning stages and before Trump anointed John Bolton as National Security Adviser, Bolton skeptically predicted the summit would not deter North Korea from acquiring nuclear weapons.

Bolton wants regime change in North Korea. His invocation of the Libya model — in which Muammar Qaddafi relinquished his nuclear weapons and was then viciously murdered — nearly derailed the summit. Bolton cynically hoped the summit would provide “a way to foreshorten the amount of time that we’re going to waste in negotiations that will never produce the result we want.”

Sirotkin said in an interview, “Sadly, [the summit] may be set up in this way to please the John Bolton neocon wing as this offers nothing but the peace we agreed to after World War II for all countries of the world in the UN Charter.” 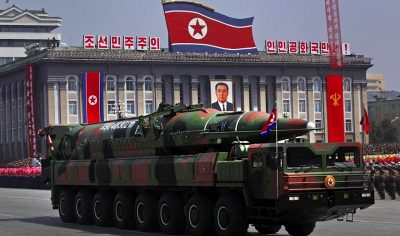 North Korea: Has agreed to give them up. (US Naval Institute)

Meanwhile, Trump claims he has achieved something his predecessors — particularly his nemesis Barack Obama — were unable to pull off. “There is no longer a Nuclear Threat from North Korea,” Trump tweeted upon landing in the United States after the summit. Five minutes later, he again took to Twitter, declaring, “Before taking office people were assuming we were going to War with North Korea. President Obama said that North Korea was our biggest and most dangerous problem. No longer – sleep well tonight.”

In an analysis shared via Facebook, H. Bruce Franklin, professor emeritus at Rutgers University, pointed out that — in a sideways fashion — Trump was correct when he tweeted there is no longer a nuclear threat from North Korea:

“[Trump] of course omitted the simple fact that there never was a realistic nuclear threat from North Korea, which has been frantically building a nuclear capability to act as a deterrent against U.S. aggression. If the U.S. stops threatening North Korea, North Korea will have no motive to threaten the U.S. with retaliation. The United States never faced any nuclear threat until we forced the Soviet Union to create one in 1949 to serve as a deterrent against our aggression.”

The significance of the Singapore Summit should not be underestimated. Trump is the first U.S. president to meet with the leader of North Korea. Trump showed Kim respect, and Kim responded in kind. Trump and Kim made a major commitment to peace. We should applaud and support it, and encourage Trump to sit down with Iran’s leaders as well.

The joint agreement signed by the two leaders in Singapore was admittedly sketchy, and denuclearization will not happen overnight. But the agreement was a critical first step in a process of rapprochement between two countries that have, in effect, been at war since 1950.

Indeed, the United States has continued to carry out military exercises with South Korea, which North Korea considers preparation for an invasion. In a critical move, Trump stated at the post-summit press conference that the United States would suspend its “very provocative” war games.

Trump also announced a freeze on any new US sanctions against North Korea and indicated that the United States could lift the current harsh sanctions even before accomplishing total denuclearization. Kim promised to halt nuclear testing and destroy a testing site for ballistic missile engines.

Ultimately, however, it is only global denuclearization that will eliminate the unimaginable threat of nuclear war.

This article is reprinted with permission from TruthOut.

Marjorie Cohn is professor emerita at Thomas Jefferson School of Law, former president of the National Lawyers Guild, deputy secretary general of the International Association of Democratic Lawyers and an advisory board member of Veterans for Peace. An updated edition of her book, Drones and Targeted Killing: Legal, Moral, and Geopolitical Issues, was recently published. Visit her website: http://marjoriecohn.com.

60 comments for “North Korea Agreed to Denuclearize, But US Refuses Despite Treaty Obligation”