U.S. policy in Honduras, particularly during the Obama administration, is directly responsible for part of the immigration crisis now gripping the U.S., argues Joseph Nevins.

Under the Obama administration In 2014, more than 68,000 unaccompanied Central American children were apprehended at the U.S.-Mexico boundary. There were more than 60,000 in 2016.

The mainstream narrative often reduces the causes of migration to factors unfolding in migrants’ home countries. In reality, migration is often a manifestation of a profoundly unequal and exploitative relationship between migrant-sending countries and countries of destination. Understanding this is vital to making immigration policy more effective and ethical.

Through my research on immigration and border policing, I have learned a lot about these dynamics. One example involves relations between Honduras and the United States.

I first visited Honduras in 1987 to do research. As I walked around the city of Comayagua, many thought that I, a white male with short hair in his early 20’s, was a U.S. soldier. This was because hundreds of U.S. soldiers were stationed at the nearby Palmerola Air Base at the time. Until shortly before my arrival, many of them would frequent Comayagua, particularly its “red zone” of female sex workers. 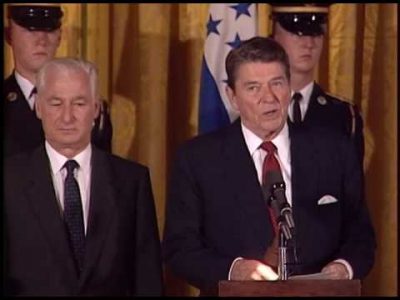 Reagan with President Azcona of Honduras on May 27, 1986

U.S. military presence in Honduras and the roots of Honduran migration to the United States are closely linked. It began in the late 1890s, when U.S.-based banana companies first became active there. As historian Walter LaFeber writes in “Inevitable Revolutions: The United States in Central America,” American companies “built railroads, established their own banking systems, and bribed government officials at a dizzying pace.” As a result, the Caribbean coast “became a foreign-controlled enclave that systematically swung the whole of Honduras into a one-crop economy whose wealth was carried off to New Orleans, New York, and later Boston.”

By 1914, U.S. banana interests owned almost 1 million acres of Honduras’ best land. These holdings grew through the 1920s to such an extent that, as LaFeber asserts, Honduran peasants “had no hope of access to their nation’s good soil.” Over a few decades, U.S. capital also came to dominate the country’s banking and mining sectors, a process facilitated by the weak state of Honduras’ domestic business sector. This was coupled with direct U.S. political and military interventions to protect U.S. interests in 1907 and 1911.

Such developments made Honduras’ ruling class dependent on Washington for support. A central component of this ruling class was and remains the Honduran military. By the mid-1960s it had become, in LaFeber’s words, the country’s “most developed political institution,” – one that Washington played a key role in shaping.

This was especially the case during the presidency of Ronald Reagan in the 1980s. At that time, U.S. political and military policy was so influential that many referred to the Central American country as the “U.S.S. Honduras” and the Pentagon Republic.

As part of its effort to overthrow the Sandinista government in neighboring Nicaragua and “roll back” the region’s leftist movements, the Reagan administration “temporarily” stationed several hundred U.S. soldiers in Honduras. Moreover, it trained and sustained Nicaragua’s “contra” rebels on Honduran soil, while greatly increasing military aid and arm sales to the country.

The Reagan years also saw the construction of numerous joint Honduran-U.S. military bases and installations. Such moves greatly strengthened the militarization of Honduran society. In turn, political repression rose. There was a dramatic increase in the number of political assassinations, “disappearances” and illegal detentions. 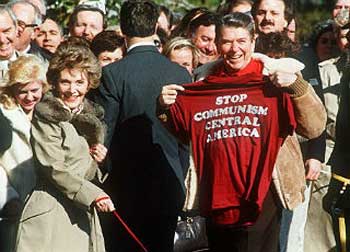 The Reagan administration also played a big role in restructuring the Honduran economy. It did so by strongly pushing for internal economic reforms, with a focus on exporting manufactured goods. It also helped deregulate and destabilize the global coffee trade, upon which Honduras heavily depended. These changes made Honduras more amenable to the interests of global capital. They disrupted traditional forms of agriculture and undermined an already weak social safety net.

These decades of U.S. involvement in Honduras set the stage for Honduran emigration to the United States, which began to markedly increase in the 1990s.

They contributed, for example, to the election of Manuel Zelaya, a liberal reformist, as president in 2006. He led on progressive measures such as raising the minimum wage. He also tried to organize a plebiscite to allow for a constituent assembly to replace the country’s constitution, which had been written during a military government. However, these efforts incurred the ire of the country’s oligarchy, leading to his overthrow by the military in June 2009. 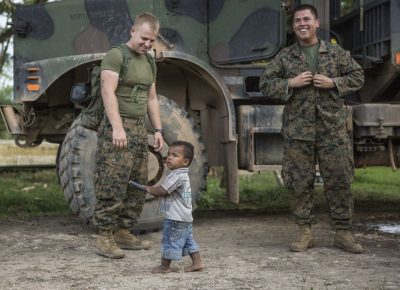 The 2009 coup, more than any other development, explains the increase in Honduran migration across the southern U.S. border in the last few years. The Obama administration played an important role in these developments. Although it officially decried Zelaya’s ouster, it equivocated on whether or not it constituted a coup, which would have required the U.S. to stop sending most aid to the country.

Then Secretary of State Hillary Clinton, in particular, sent conflicting messages, and worked to ensure that Zelaya did not return to power. This was contrary to the wishes of the Organization of American States, the leading hemispheric political forum composed of the 35 member-countries of the Americas, including the Caribbean. Several months after the coup, Clinton supported a highly questionable election aimed at legitimating the post-coup government.

Strong military ties between the U.S. and Honduras persist: several hundred U.S. troops are stationed at Soto Cano Air Base (formerly Palmerola) in the name of fighting the drug war and providing humanitarian aid.

Since the coup, writes historian Dana Frank, “a series of corrupt administrations has unleashed open criminal control of Honduras, from top to bottom of the government.”

Organized crime, drug traffickers and the country’s police heavily overlap. Impunity reigns in a country with frequent politically-motivated killings. It is the world’s most dangerous country for environmental activists, according to Global Witness, an international nongovernmental organization.

Although its once sky-high murder rate has declined, the continuing exodus of many youth demonstrates that violent gangs still plague urban neighborhoods.

Meanwhile, post-coup governments have intensified an increasingly unregulated, “free market” form of capitalism that makes life unworkable for many. Government spending on health and education, for example, has declined in Honduras. Meanwhile, the country’s poverty rate has risen markedly. These contribute to the growing pressures that push many people to migrate, raising ethical questions about the responsibility of the United States toward those now fleeing from the ravages U.S. policy has helped to produce.

This article was originally published on Oct. 31, 2016 on The Conversation.

Joseph Nevins received his Ph.D. in Geography from the University of California, Los Angeles. His research interests include socioterritorial boundaries and mobility, violence and inequality, and political ecology; he has conducted research in East Timor, Mexico and the United States-Mexico border region.

← An Elite Coalition Emerges Against a Trump-Kim Agreement
North Korea Agreed to Denuclearize, But US Refuses Despite Treaty Obligation →