The attempt by the Italian president to install an outsider from the IMF to be prime minister symbolized an end of national sovereignty in Europe, reports Andrew Spannaus.

By invoking his power last month to reject a proposed government minister because of the his critique of the EU, Italian President Sergio Mattarella made it clear that his priority is not to defend the Italian state—his job, theoretically—but rather the European Union.

This put into the open something rarely admitted publicly: that Italy—like other European countries—has essentially given up its existence as a sovereign nation-state. The EU treaties adopted by national parliaments now take precedence over the basic principles of each member country’s constitution.

Mattarella had announced on May 27 that Paolo Savona, the minister of the economy proposed by the populist parties that won the March elections, was unacceptable because of his critical position towards the EU. The president said the appointment would spook the markets and threaten the survival of the Euro. When the two populist parties that had joined together to govern, the Five Star Movement (M5S) and the League, insisted on keeping Savona, Mattarella exercised his power to reject their choice and began plans to appoint an IMF technocrat who would guarantee the current budget orthodoxy while taking the country towards new elections.

Luigi di Maio, the 31-year old M5S leader, ultimately got Matteo Salvini, head of the League, to partially relent, shifting Savona to another position in order to avoid the collapse of their newly-formed coalition. Yet the brief firestorm touched off by the clash with Mattarella was revealing, as it risked doing precisely what the president and his EU backers fear most—promote even more opposition to the loss of national sovereignty that has occurred over the past 25 years. 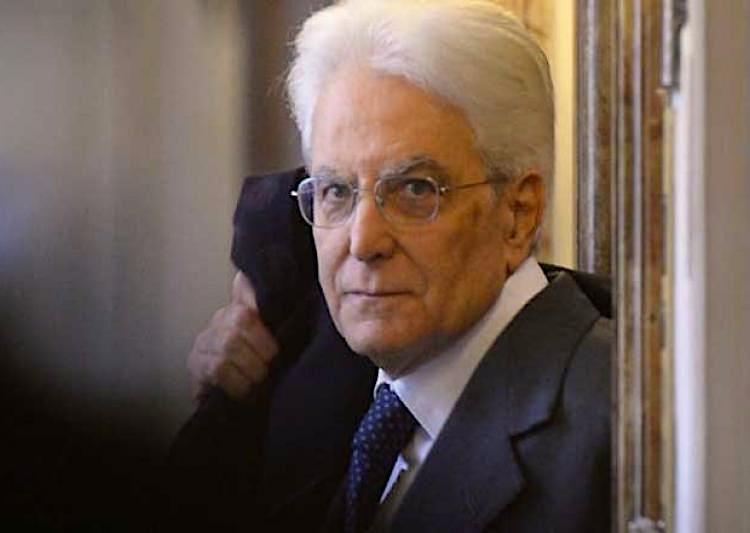 Mattarella: Serving the EU, not Italy.

The EU’s principle aim is to continue the pro-finance policies launched in the 1980s with wide-scale de-regulation and the emergence of what became known as globalization, i.e. the loss of national sovereignty in favor of a borderless world in which financial interests would become more important than governments. The Union adopted the free market mantra, which it imposed through increasing supra-national bureaucracy. State intervention and regulations were considered the enemies of efficiency and growth, while austerity and so-called structural reforms were launched to break down the successful mixed state/market model that had been in place for decades.

Over the years, as national institutions gradually relinquished their power to make economic policy, European political elites adopted the goal of complete EU integration. They followed this dogma despite numerous contradictions, from the failure of austerity policies to increasing economic divisions, from the lack of democratic debate to sharply different foreign policy goals among member states.

Naturally, some members of national elites recognized the folly of the EU policies, one of whom was Paolo Savona. However, he is by no means “anti-European,” against further political cooperation at the supranational level. Rather, he simply recognizes that the neo-liberal policies of budget balancing and prohibiting state intervention are harmful to Italy (and others). And, given the European institutions’ refusal to re-think these rules, he came up with what some saw as a radical idea: draw up a “Plan B” in which Italy would withdraw from the single currency. The aim was to use this threat to the very survival of the Euro to exact changes such as abandoning austerity policies and allowing for large-scale public investment.

In practical terms, it is very unlikely that Italy or any other large country would today simply “leave” the Euro on its own. A more probable scenario is that the EU architecture would crumble if some of its largest members broke with the Brussels and Frankfurt orthodoxy. So, if Italy were to dig in its heels, for example, resisting calls for further deregulation and insisting on large-scale, targeted public investment, it could potentially find support from other victims of austerity such as Greece, Portugal and Spain, but also factions critical of EU policies in France and Germany.

Most of the Italian population now supports such a scenario and populist parties big and small have used it explicitly to increase their popularity. This gave them a crucial margin of added support, beyond exploiting other hot-button issues such as immigration, which despite having taken on more importance in recent years, by itself would not have been enough to bring the outsiders to power.

Thus when Mattarella stood before the TV cameras on May 27 to declare his veto, he made what was potentially a colossal blunder, both formally and politically. Besides overstepping his authority as President, since the Constitution does not allow him to intervene regarding the political orientation of the government, he sparked a backlash that could have easily strengthened his opponents.

The new government has already shown its willingness to break with establishment policies, specifically regarding relations with Russia. At the G7 meeting in Canada this month, Prime Minister Conte supported Donald Trump’s call to bring Russia back into the fold, providing the U.S. President with support on this issue that he has lacked so far among the leaders of the world’s most industrialized countries. Conte stressed Italy’s position as a loyal ally of the United States and NATO, while still insisting that better relations with Russia are needed. This point is also felt strongly among Italian businesses and institutions, particularly due to economic ties developed over many decades.

While the popularity of M5S is based on its anti-existing-system, anti-corruption platform, the League is best-known for its anti-immigration rhetoric. But over the years, the League has also adopted the most “sovereignist” positions among the large Italian political parties regarding economic policy. It now showcases economists who reject budget constraints outright, suggesting that governments can create currency freely, if need be. Further, the party has run national campaigns to re-regulate the banking sector—which would conflict directly with EU rules; both they and M5S promise to abandon austerity policies and increase both social spending and public investment. Last, they aim to implement a soft version of a “flat tax,” simplifying the tax system with only two brackets so as to inject more liquidity into the coffers of companies and the pockets of families, while raising penalties for tax evasion.

Any of these issues can cause an open clash with the EU, given its strict budget rules. The question is if the new government will attempt to finesse the issue and avoid an open fight, or welcome a political debate over the validity of the neo-liberal policies whose failure brought them to power.

Andrew Spannaus is a journalist and strategic analyst based in Milan, Italy. He was elected Chairman of the Milan Foreign Press Association in March 2018. He has published the books “Perché vince Trump” (Why Trump is Winning – June 2016) and “La rivolta degli elettori” (The Revolt of the Voters – July 2017).

← North Korea Agreed to Denuclearize, But US Refuses Despite Treaty Obligation
Failure of the Left Leaves Italy a Victim of the Market →