The failure of the Italian Left has left Italy dominated by the ‘free market’, just as a European Union commissioner said it would, according to Attilio Moro.

At the end of last month, European Commissioner Günther Oettinger scolded rebellious Italian voters who are fed up with European Union bureaucrats and European Central bankers dominating their country. “The market will teach Italians how to vote,” Oettingerm said.

He had made this remark when it seemed Italy was heading toward fresh elections after the latest political crisis. At the time the spread between Italian and German bonds jumped more than 300 points, aggravating Italy’s heavy public debt. In other words, Oettinger was convinced that the need for financial stability would force upstart Italian voters to get back in line with what the bankers want.

In the end, there was no new election as the Italian president backed down after first exercising his rarely used powers to reject a new coalition government of two populist parties who won the March election. He then tried to install an IMF bureaucrat as prime minister, rejecting the will of Italian voters, but was outmaneuvered by the coalition.

Oettinger, however, was still probably right: the market will most likely determine the future course of Italian politics. And that’s largely because of the collapse of the Italian Left.

Without a strong political party to represent a collective expression of public discontent with the neoliberal economics of the past decades, the market will inevitably remain the arbiter of any capitalist country. A nation with a very high public debt that has to obey EU rules designed in Brussels and Berlin will continue to experience a threat to its national sovereignty and democracy.

In the last 15 years the Italian Left and its most important party, the Partito Democratico (PD), has plainly ignored such threats, being viewed by voters as the executers of the “Brussels Diktat.” 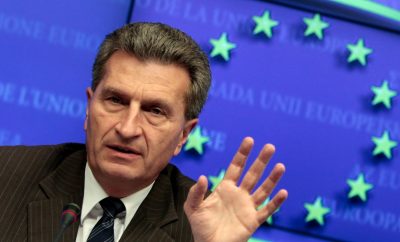 Oettinger: Markets will tell Italians how to vote.

Therefore, the so called ‘populist’ parties—the rightwing “Lega” and the Five Stars Movement—stepped in and legitimized themselves as the only political forces who even raised these questions and offered solutions. They won the last elections in March, while the PD lost more than 10 percent.

Some DP leaders recognized they had lost touch with their base: workers, retirees and the middle class whose income had been halved by the 2008 crisis, the introduction of the euro and the imposition of austerity.

In an increasingly impoverished country, the sole ‘leftist’ measure of the PD government of Matteo Renzi from 2014 to 2016 had been to give a paltry 80 euros a month to the most deprived households. It was an electorally driven handout, somewhat reminiscent of Eva Peron handing out 50 pesos to desperate Argentines. In the meantime the PD government bailed out four Italian banks with an injection of 20 billion euros. “At least say something that sounds leftist,” an Italian humorist once told Renzi while he was busy rescuing banks (including Banca Monte dei Paschi di Siena, the oldest bank in the world founded in 1472), which had been so generous financing Italian political parties, including the PD.

On the sensitive issue of illegal immigration, the Italian Left has been less than convincing. The PD speaks of a duty to host refugees fleeing wars and famine, a sentiment many Italians share, but ignores the impact of thousands of refugees in the poorest Italian suburbs, raising accusations of elitism.

This led to the perception of the PD and the Left in general as being the Establishment, with few new ideas and ready to sell their country to Brussels. The PD was also partly responsible for zero economic growth and a twenty-year social malaise. It’s not surprising the ‘populists’ won.

A Failure Beyond Italy

The crisis of the Left goes beyond Italy. In Germany the Social Democrats (SPD) badly lost the last election because of its unpopular immigration policy, and its coziness with corporate Germany at the expense of workers and consumers. Entering into a new Grand Coalition, the SPD became a crutch for a weak Merkel government. With rising anger among workers, the right-wing AFD – a pariah party before the last elections—filled the vacuum and became the third largest party.

In France,“socialist” President Francois Hollande pushed an unrealistic 75 percent tax for the rich, while failing to improve life conditions of the poor, losing support from both.

The Left in core countries of Europe is experiencing an unprecedented post-war crisis. It is difficult to imagine how it can cope with an increasingly globalized market, widespread social instability, environmental threats, mass-immigration, and the unprecedented power of corporate lobbying. It is faced with fighting society’s subordination to market forces. But so far they have no answers as long as the traditional Left succumbs to the corporations and banks, whether from the ambition and vanity of its leaders or the bankruptcy of its idea.

The rise of the popular Right is challenging the European Left to overcome its complacency and bureaucratic stagnation to reinvent itself. Should it continue to capitulate and lose this challenge, unimaginable disaster could be in store for Europe.

← Defending the EU Rather Than One’s Own Country
At War With Ourselves: The Domestic Consequences of Foreign Policies →