Exclusive: As the world nervously assesses North Korea’s claims about having a hydrogen bomb, another danger point is in Turkey where an erratic leader could seize NATO’s H-Bombs, warns Jonathan Marshall.

Even in this contentious era, one proposition still enjoys near-universal support: the United States should make it the highest priority to prevent nuclear weapons from falling into the hands of hostile states.

It’s far too late to stop North Korea from getting the Bomb, despite all the militant rhetoric coming out of Washington. But we still have a chance to prevent an erratic Middle East strongman from holding the United States hostage by threatening to seize dozens of deadly hydrogen bombs.

As I warned more than a year ago, he controls overall access to NATO’s largest nuclear storage facility — a stockpile of some 50 B-61 hydrogen bombs at Incirlik air base in southeastern Turkey. Each weapon has a yield of up to 170 kilotons, nearly 12 times greater than the atomic bomb that wiped out Hiroshima in 1945.

The bombs are a holdover from the Cold War, with no current strategic rationale. They represent a growing risk to U.S. security, not a safe deterrent.

As Erdogan’s relations with the United States and Western Europe go from bad to worse, the case for withdrawing those weapons of mass destruction from his reach grows ever more urgent.

“It is the worst place possible to be keeping nuclear weapons,” said Joseph Cirincione, a nuclear arms control expert and president of the Ploughshares Fund. Citing the relocation of American families from the air base as U.S.-Turkish tensions have grown, he asked rhetorically, “it is not safe for our military spouses and children, but it is OK for 50 hydrogen bombs to be there?”

His concerns were recently echoed by a “former senior NATO official” who agreed the weapons “should be removed given the instability, both in the country and across the border in Syria and Iraq.”

Although the United States and Turkey are technically NATO allies — and Turkey still allows the U.S. Air Force to conduct bombing raids into Syria and Iraq from Incirlik — there’s growing friction between them. 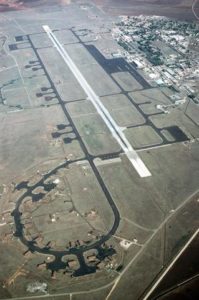 An aerial view of the airfield at Incirlik Air Base in Turkey, Nov. 1987. (Photo from the Department of Defense)

Just the other day, Erdogan blasted the U.S. judicial system as “scandalous” following reports of new indictments against members of his armed security detail who brutally attacked peaceful pro-Kurdish demonstrators outside the Turkish ambassador’s residence in Washington last spring. More than a dozen Turkish security officials have been charged since that melee was caught on video.

Erdogan has also bitterly attacked Washington for supporting Kurdish rebels in Syria, whom he regards as supporters of the banned Kurdistan Worker’s Party. As a sign of his anger, Turkish-led forces have directed fire at U.S. allies in Syria, and Ankara recently published the location of U.S. Special Forces in that country, putting them at risk and triggering a Pentagon protest.

Showing no deference toward his allies, Erdogan has jailed an American pastor, a French journalist, and at least a dozen German citizens on apparently trumped up political charges, despite pleas by senior government officials from those NATO countries. An angry German Chancellor Angela Merkel recently said Berlin needs to “react decisively” against Turkey’s violation of its citizens’ rights, and “rethink” its relations with Ankara.

As international human rights groups point out, those Westerners represent only a tiny percentage of the victims of Erdogan’s authoritarian crackdown since the failed military coup against his regime in 2016. Under the ongoing state of emergency that Erdogan imposed, authorities have opened criminal investigations against more than 150,000 people accused of supporting the coup.

“As a result of the crackdown, some 50,000 people languish in jail,” writes John Dalhuisen, Amnesty International’s European director. “Among them are at least 130 journalists, the highest number of any country in the world. More than 100,000 public sector workers, including a quarter of the judiciary, have been arbitrarily dismissed . . . and hundreds of academics were cast out of their jobs.”

Erdogan has warned that the state of emergency may be extended several more years. He also vowed to show no mercy to his enemies: “First, we will chop off the heads of those traitors. When they appear in court, let’s make them appear in orange suits like in Guantanamo Bay.”

Such authoritarian outbursts are deeply embarrassing to NATO, which professes democratic values. Left to his own devices, President Trump would likely ignore Ankara’s transgressions, out of gratitude for Erdogan overseeing the launch of Trump Towers in Istanbul in 2012. But the special prosecutor’s investigation of Trump’s first national security adviser, Michael Flynn, for failing to register as a lobbyist for the Turkish government last year, has undoubtedly forced Trump to keep greater distance from Erdogan. 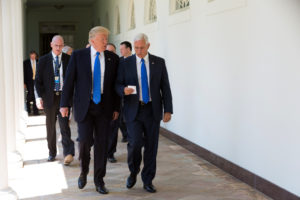 As a result, Trump’s attitude toward Turkey — as with so many issues — appears conflicted. In a recent snub, the Pentagon refused Ankara’s request to send personnel to train Turkish F-16 pilots, to replace the several hundred fighter pilots dismissed in the wake of last year’s coup attempt.

On the other hand, Washington seems committed to using Incirlik as its primary base from which to carry out air strikes in Syria and Iraq. According to Stars and Stripes, the Pentagon wants to spend about $26 million to house 216 more U.S. airmen at the base. (It also plans to spend another $6.4 million to support a missile defense radar site in Eastern Turkey.)

The good news is that the additional airmen aren’t pilots, but Air Force security personnel, charged with improving base security. If that’s a first step toward safeguarding NATO’s hydrogen bomb stockpile, we should all applaud.

But 216 men can’t stop the Turkish army from seizing those weapons if Erdogan ever decides he wants to hold NATO hostage or turn Turkey into a regional superpower. There’s only one truly secure solution to this growing nuclear peril — total redeployment of these weapons back to the United States.