U.S. intelligence analysts reportedly have traced North Korea’s leap forward in creating an intercontinental ballistic missile capable of striking U.S. territory to a decaying Ukrainian rocket-engine factory whose alleged role could lift the cover off other suppressed mysteries related to the U.S.-backed coup in Kiev.

Because the 2014 coup – overthrowing elected President Viktor Yanukovych – was partly orchestrated by the U.S. government’s influential neoconservatives and warmly embraced by the West’s mainstream media, many of the ugly features of the Kiev regime have been downplayed or ignored, including the fact that corrupt oligarch Igor Kolomoisky was put in charge of the area where the implicated factory was located.

As the region’s governor, the thuggish Kolomoisky founded armed militias of Ukrainian extremists, including neo-Nazis, who spearheaded the violence against ethnic Russians in eastern provinces, which had voted heavily for Yanukovych and tried to resist his violent overthrow.

Kolomoisky, who has triple citizenship from Ukraine, Cyprus and Israel, was eventually ousted as governor of Dnipropetrovsk (now called Dnipro) on March 25, 2015, after a showdown with Ukraine’s current President Petro Poroshenko over control of the state-owned energy company, but by then Kolomoisky’s team had put its corrupt mark on the region.

At the time of the Kolomoisky-Poroshenko showdown, Valentyn Nalyvaychenko, chief of the State Security Service, accused Dnipropetrovsk officials of financing armed gangs and threatening investigators, Bloomberg News reported, while noting that Ukraine had sunk to 142nd place out of 175 countries in Transparency International’s Corruptions Perception Index, the worst in Europe.

Even earlier in Kolomoisky’s brutal reign, Dnipropetrovsk had become the center for the violent intrigue that has plagued Ukraine for the past several years, including the dispatch of neo-Nazi militias to kill ethnic Russians who then turned to Russia for support.

Yet, protected by the waves of anti-Russian propaganda sweeping across the West, Kolomoisky’s crowd saw few reasons for restraint. So, among the Kolomoisky-backed militias was the Azov battalion whose members marched with Swastikas and other Nazi insignias.

Ironically, the same Western media which heartily has condemned neo-Nazi and white-nationalist violence in Charlottesville, Virginia, adopted a much more tolerant attitude toward Ukraine’s neo-Nazism even as those militants murdered scores of ethnic Russians in Odessa in May 2014 and attacked ethnic Russian communities in the east where thousands more died.

When it came to Ukraine, The New York Times and other mainstream outlets were so dedicated to their anti-Russian propaganda that they veered between minimizing the significance of the neo-Nazi militias and treating them as bulwarks of Western civilization.

For instance, on Feb. 11, 2015, the Times published a long article by Rick Lyman that presented the situation in the port city of Mariupol as if the advance by ethnic Russian rebels amounted to the arrival of barbarians at the gate while the inhabitants were being bravely defended by the forces of civilization. But then the article cited the key role in that defense played by the Azov battalion.

Though the article provided much color and detail and quoted an Azov leader prominently, it left out the fact that the Azov battalion was composed of neo-Nazis.

This inconvenient truth that neo-Nazis were central to Ukraine’s “self-defense forces” would have disrupted the desired propaganda message about “Russian aggression.” After all, wouldn’t many Americans and Europeans understand why Russia, which suffered some 27 million dead in World War II, might be sensitive to neo-Nazis killing ethnic Russians on Russia’s border?

So, in Lyman’s article, the Times ignored Azov’s well-known neo-Nazism and referred to it simply as a “volunteer unit.”

In other cases, the Times casually brushed past the key role of fascist militants. In July 2015, the Times published a curiously upbeat story about the good news that Islamic militants had joined with far-right and neo-Nazi battalions to kill ethnic Russian rebels.

The article by Andrew E. Kramer reported that there were three Islamic battalions “deployed to the hottest zones,” such as around Mariupol. One of the battalions was headed by a former Chechen warlord who went by the name “Muslim,” Kramer wrote, adding:

“The Chechen commands the Sheikh Mansur group, named for an 18th-century Chechen resistance figure. It is subordinate to the nationalist Right Sector, a Ukrainian militia. Right Sector formed during last year’s street protests in Kiev from a half-dozen fringe Ukrainian nationalist groups like White Hammer and the Trident of Stepan Bandera.

Of course, the Times bent over backward to suggest that the blame might still fall on Russia even though Dnipro is a stronghold of some of Ukraine’s most militantly anti-Russian politicians and although U.S. intelligence analysts have centered their suspicions on a Ukrainian-government-owned factory there, known as Yuzhmash.

So, it would seem clear that corrupt Ukrainian officials, possibly in cahoots with financially pressed executives or employees of Yuzhmash, are the likeliest suspects in the smuggling of these rocket engines to North Korea.

Even the Times couldn’t dodge that reality, saying: “Government investigators and experts have focused their inquiries on a missile factory in Dnipro, Ukraine.” But the Times added that Dnipro is “on the edge of the territory where Russia is fighting a low-level war to break off part of Ukraine” – to suggest that the Russians somehow might have snuck into the factory, stolen the engines and smuggled them to North Korea.

But the Times also cited the view of missile expert Michael Elleman, who addressed North Korea’s sudden access to more powerful engines in a study issued this week by the International Institute for Strategic Studies.

“It’s likely that these engines came from Ukraine — probably illicitly,” Elleman said in an interview with the Times. “The big question is how many they have and whether the Ukrainians are helping them now. I’m very worried.”

Yet, always looking for a chance to shift the blame to Russia, the Times quickly inserted that “Mr. Elleman was unable to rule out the possibility that a large Russian missile enterprise, Energomash, which has strong ties to the Ukrainian complex, had a role in the transfer of the RD-250 engine technology to North Korea.”

Of course by that standard – “unable to rule out the possibility” – almost anyone could be put under suspicion. One source familiar with the U.S. intelligence assessments said there is even suspicion that some operatives in Israel played a role in transferring the rocket engines to North Korea. The source cited Israel’s historic arms-trade with North Korea dating back to Israel’s covert arms pipeline to Iran during the Iran-Iraq War of the 1980s.

Israel, a rogue nuclear-weapons state itself, also has a history of collaborating with other “pariah” states on nuclear proliferation, including apartheid South Africa which joined Israel in nuclear tests before the democratic election of Nelson Mandela.

Kolomoisky cultivated close ties between Israel and Dnipro by helping to construct one of the largest Jewish centers in the world in the Ukrainian city, which has fallen on hard times since the 2014 coup shattered economic ties with Russia and left the Yuzhmash factory with little work. 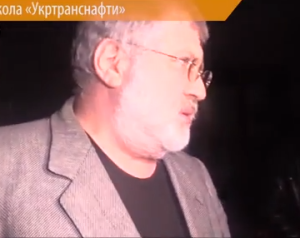 Ukrainian oligarch Igor Kolomoisky confronting journalists after he led an armed team in a raid at the government-owned energy company on March 19, 2015. (Screen shot from YouTube)

Yet, while the Ukraine crisis may have reduced living standards for average Ukrainians, it was an important catalyst in the creation of the New Cold War between Washington and Moscow, which offers lucrative opportunities for U.S. military contractors and their many think-tank apologists despite increasing the risk of nuclear war for the rest of us.

In particular, U.S. neoconservatives have viewed heightened tensions between the West and Russia as valuable both in driving up military spending and laying the groundwork for a possible “regime change” in Moscow. The neocons have wanted to retaliate against Russian President Vladimir Putin’s role in frustrating neocon (and Israeli-Saudi) desires to overthrow Syrian President Bashar al-Assad and to bomb Iran, which Israel and Saudi Arabia now view as their principal regional adversary.

The neocon/Israeli-Saudi interests have produced many strange bedfellows with weapons flowing to Al Qaeda’s affiliate in Syria, and – because of Putin’s assistance to Syria and Iran – the tolerance of neo-Nazis and Islamic militants in Ukraine.

Kolomoisky’s operation in Dnipro also has come under suspicion for a possible role in the shoot-down of Malaysia Airlines Flight 17 on July 17, 2014. According to a source briefed by U.S. intelligence analysts, Dnipro was the center of a plot to use a powerful anti-aircraft missile to shoot down Putin’s official plane on a return flight from South America, but instead – after Putin’s plane took a more northerly route – the missile brought down MH-17, killing all 298 people aboard.

For reasons that have still not been explained, the Obama administration suppressed U.S. intelligence reports on the MH-17 tragedy and instead joined in pinning the shoot-down on ethnic Russian rebels and, by implication, Putin and his government.

In the West, the MH-17 shoot-down became a cause celebre, generating a powerful propaganda campaign to demonize Putin and Russia – and push Europe into joining sanctions against Moscow. Few people dared question Russia alleged guilt even though the Russia-did-it arguments were full of holes. [See here and here.]

Now this North Korean case forces the issue of Ukraine’s reckless behavior to the fore again: Did an inept or corrupt Ukrainian bureaucracy participate in or tolerate a scheme to sell powerful rocket engines to North Korea and enable a nuclear threat to U.S. territory?

In response to the reports of possible Ukrainian collusion in North Korea’s missile program, Oleksandr Turchynov, secretary of the Ukrainian national security and defense council, issued a bizarre denial suggesting that The New York Times and U.S. intelligence agencies were pawns of Russia.

“This information [about North Korea possibly obtaining rocket engines from Ukraine] is not based on any grounds, provocative by its content, and most likely provoked by Russian secret services to cover their own crimes,” Turchynov said.

Press reports about Turchynov’s statement left out two salient facts: that as the interim President following the February 2014 coup, Turchynov ordered Right Sektor militants to begin the bloody siege of rebel-held Sloviansk, a key escalation in the conflict, and that Turchynov was the one who appointed Kolomoisky to be the ruler of Dnipropetrovsk.

125 comments for “A Ukraine Link to North Korea’s Missiles?”