Exclusive: Another problem with the new report blaming Russia for the Malaysia Airlines Flight 17 shoot-down is the bizarre route that the investigators say the Buk missile battery took, a wild ride that made no sense, reports Robert Parry.

Without any skepticism, the West’s mainstream media is embracing the new allegations implicating Russia in the downing of Malaysia Airlines Flight 17, but there are key evidentiary and logical gaps including the presumed route followed by the supposed Buk missile convoy.

According to the Joint Investigation Team (JIT), which while “led” by the Dutch was guided by the Ukrainian SBU intelligence service, the Russians delivered the Buk anti-missile battery at a border crossing about 30 miles southeast of Luhansk on the night of July 16-17, 2014. From that point, there would have been an easy and logical route to the JIT’s claimed firing site. 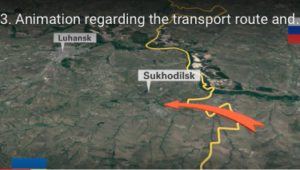 The convoy would have followed one of two roads west to H21 and then taken H21 southwest to the area around Snizhne before getting onto a back road to Pervomaiskyi where the JIT says the launch occurred.

Instead, according to the JIT account, the convoy took a strange and circuitous route, skirting south of Luhansk to Yenakiieve, a town that sits along highway E50, which incidentally offered another easy route south to Snizhne. Instead of going that way, according to the JIT, the convoy proceeded southwest to the city of Donetsk, stopping there before turning east on H21 passing through a number of towns on the way to Snizhne.

Not only does this route make no sense, especially given the extreme sensitivity of the Russians providing a powerful anti-aircraft missile battery to the rebels, an operation that would call for the utmost secrecy and care, but the eventual positioning of the Buk system in the remote town of Pervomaiskyi makes little military sense.

According to the JIT’s video narrative, the presumed purpose of the Russians taking such a huge risk of supplying a Buk system was to protect rebel troops from Ukrainian military aircraft firing from heights beyond the range of shoulder-fired MANPADs.

So why would the Russians position the Buk battery in the south far from the frontlines of the heaviest fighting which was occurring in the north and then have the crew shoot down a commercial airliner when, according to the JIT, there were no military aircraft in the area?

To accept the JIT’s narrative, you have to swallow a large dose of credulity, plus assume that the Russians are extremely incompetent, so incompetent that they would send a highly secret operation on a wild ride across the eastern Ukrainian countryside, ignoring easy routes to the target location (only about 70 miles from the Russian border) in favor of a route more than twice as long (about 150 miles) while passing through heavily populated areas where the convoy could be easily photographed.

Then, the Russians (or their rebel allies) would have placed the Buk system in a spot with marginal if any military value, misidentify a commercial airliner as some kind of military aircraft, and – with a sudden burst of efficiency and competence – shoot it down.

The JIT’s claim about the exfiltration of the remaining Buks has similar problems of logic. The JIT asserts that rather than take the most direct (and most discreet) route back to Russia by heading east, the missile battery supposedly traveled north to Luhansk before crossing back into Russia, a longer trip through more populous areas, another head-shaker.

After the MH-17 shoot-down, which killed 298 people, I’m told the Russian government did fear that somehow one of its field operatives might have been responsible and conducted an intensive investigation, including an inventory of its equipment, concluding that all its Buk missiles were accounted for. 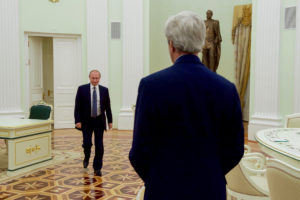 U.S. Secretary of State John Kerry waits for Russian President Vladimir Putin in a meeting room at the Kremlin in Moscow, Russia, before a bilateral meeting on July 14, 2016. (State Department photo)

I was also told that at least some CIA analysts shared the doubts about Russia’s guilt and came to believe that the MH-17 shoot-down was the work of a rogue and out-of-control Ukrainian team with the possible hope that the airliner was a Russian government plane returning President Vladimir Putin from South America.

Another fallacy of the JIT’s report is to assume that in July 2014 there were fixed lines of control between the Ukrainian government and the eastern Ukrainian rebels, something like the trenches of World War I. Indeed, the fluidity of the battle lines – and Ukraine’s ability to penetrate deep into rebel “territory” – was underscored by one of the SBU’s telephone intercepts published by the JIT on Wednesday.

According to the JIT, the conversation revealed a Ukrainian military convoy passing through the town of Sabivka, which is about five miles west of Luhansk, and moving toward an airport, possibly Luhansk’s airport south of the city. If that JIT account is correct, it shows that armed Ukrainian convoys could move almost at will across much of rebel “territory.”

And that would suggest that the assumption that the Buk missile must have been fired by Russians or Russian rebels because the firing location was inside rebel “territory” is suspect. According to Dutch intelligence  (which really means NATO intelligence), the Ukrainians had several high-powered anti-aircraft missile systems in eastern Ukraine on July 17, 2014, the day MH-17 was shot down.

The JIT report makes no effort to explain where those Ukrainian Buks were positioned, presumably because Ukraine was part of the JIT investigation and thus had the right to veto the release of any information. While steering the Dutch, Australians and others toward blaming the Russians, Ukraine’s SBU was never going to allow evidence that would put the spotlight on Ukraine.

In addition, by issuing the report in video form, the JIT made it difficult for the public to focus on the logical inconsistencies in the findings, such as the alleged convoy route. Further, complicating the process of evaluation, JIT enhanced its presentation by mixing in real-looking computer graphics with images found on social media.

[For more on this topic, see Consortiumnews.com’s “Troubling Gaps in New MH-17 Report.”]

38 comments for “The Official and Implausible MH-17 Scenario”