Russians responded with relative calm to the lethal terror attack on St. Petersburg’s metro but stressed that the incident underscored the need for counter-terror cooperation despite other disagreements, writes Gilbert Doctorow.

Russia’s reaction to Monday’s terror attacks on St. Petersburg’s subway system stands in stark contrast to what we have seen in public behavior in Paris, Berlin and Brussels following similar attacks over the past 18 months. 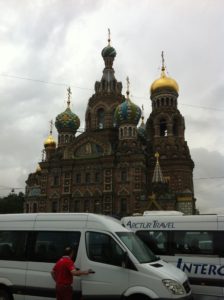 A busy tourist scene in St. Petersburg, Russia in 2013. (Photo by Robert Parry)

There is some commonality, to be sure: in every case, days of mourning for the victims were immediately declared and the head of state visited the scene of the horror to pay respects to the fallen. Vladimir Putin did just that Monday night when he lay flowers at the metro station where 10 citizens died and scores more were injured, requiring hospitalization.

But Putin delivered no maudlin speech to the nation and Russian state television coverage was not dominated by images of tearful and shocked citizens lighting candles and reaffirming their faith in a free, open and pluralistic society – the dominant themes of the media in France, Germany and Belgium.

In St. Petersburg, the official reactions were more down to earth and practical. To ease the plight of the millions of citizens and visitors to the city center — faced with the shutdown of the entire metro system pending security searches to uncover other possible bombs — the city authorities declared that all surface transport including taxis and suburban trains would be offered free of charge for the day.

The precaution of closing the metro system turned out to be entirely justified. Within an hour of the explosion on a train traveling between two key stations of the Blue Line, Tekhnologichesky Institute and Sennaya Square, police discovered and defused a more powerful bomb at the Moskovsky metro station, which connects with the heavily visited Moscow railway terminal at the top of the city’s premier boulevard, Nevsky Prospekt.

Being present in the city center at just this time, I was witness to the massive flow of people along the sidewalks as we were all involuntarily turned into pedestrians to get around town. The mood, nonetheless, was calm and good-natured.

On the evening television, commentators, including security experts and Duma legislators, delivered their views of the tragedy, including who may have been its authors and implementers; what can be done at the local, the national and the international levels to ensure public safety; and how to protect against repeat attacks.

This is no small matter coming from a nation whose culture is perhaps best known to the world from its great Nineteenth and early Twentieth century literature. Anton Chekhov summarized the culture pithily with the remark of one of his protagonists in a parlor-room gathering: since they aren’t serving us tea, let’s philosophize! Russia is also the country of deductive Cartesian thinking, which gave us the witticism: it works fine in practice, but how is it theory?

Russians may still enjoy verbal dueling, as we see in the popularity of their televised talk shows, but we witnessed more steely rationalism on the screen than heated emotion and empty pathos with respect to victims, such as predominated in Western European media following terror attacks.

As made clear on Rossiya 1’s news and opinion shows, 60 Minutes and Evening with Vladimir Soloviev. Russian commentators did not jump to conclusions. Although the image of a leading suspect from the station’s closed-circuit television fit the description of a gloomy mature jihadist, the enumeration of those who might be the plotters and sponsors had no such mental constraints.

As the razor-sharp Yevgeny Satanovsky explained, the attacker or attackers could come from any of Russia’s many current ill-wishers, seeking to destabilize the country. These range from Al Qaeda, ISIS and the Ukrainian nationalist extremists to the exiled oligarch and Putin-hater Mikhail Khodorkovsky.

Second, Russian commentators freely admitted that no security precautions can prevent terror attacks 100 percent of the time. Yes, there are metal detectors at all metro station, rail terminals, museums and concert halls. But at peak hours, when the public passes through in waves, the police monitors cannot and do not respond to every alarm signal from these devices. And although Russia has been trying to implement an Israeli-style “face control” to spot possible malefactors before they strike, lack of training and erroneous presumptions about one or another national type lead to poor results.

Third, limited policing resources have to be focused on uncovering plotters early, well before their plans are put into execution. For this to succeed, exchange of information with other national intelligence authorities is essential. This has to begin with other Commonwealth of Independent States (CIS) countries (consisting of former Soviet republics) but with particular concern focused on those in Central Asia where the threat of violent jihadists is greatest because of recruits drawn to the fighting in the Middle East and then returning. CIS members have visa-free travel to Russia.

Intelligence cooperation is also important with the U.S. and Western Europe. In this regard, TV analysts reminded viewers about how the FBI and the Obama administration failed to take seriously warnings from their Russian intelligence counterparts about the Tsarnaev brothers, who subsequently carried out the Boston Marathon bombings.

The principal message from Russia to the world after the St. Petersburg terror attack is the need for common-sense cooperation and intelligence sharing about both terror groups and individual perpetrators without regard to other rancorous issues. The Russians reminded us that the first responsibility of every government is to ensure the safety and security of its citizenry.