Exclusive: Recent U.S. foreign policy – driven by neocons and liberal hawks – has spread chaos and death around the globe. But can “crazy” Donald Trump bring sanity to how the U.S. approaches the world, asks Robert Parry.

If you wanted to bring sanity to a U.S. foreign policy that has spun crazily out of control, there would be some immediate steps that you – or, say, Secretary of State Rex Tillerson – could take, starting with a renewed commitment to tell the truth to the American people. 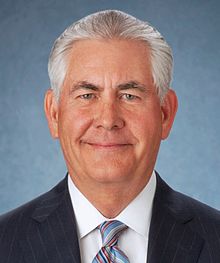 Instead of the endless “perception management” or “strategic communication” or “psychological operations” or whatever the new code words are, you could open up the files regarding key turning-point moments and share the facts with the citizens – the “We the People” – who are supposed to be America’s true sovereigns.

For instance, you could release what the U.S. government actually knows about the Aug. 21, 2013 sarin gas attack in Syria; what the files show about the origins of the Feb. 22, 2014 coup in Ukraine; what U.S. intelligence analysts have compiled about the July 17, 2014 shoot-down of Malaysia Airlines Flight 17 over eastern Ukraine. And those are just three examples of cases where U.S. government propagandists have sold a dubious bill of goods to the American and world publics in the “information warfare” campaign against the Syrian and Russian governments.

If you wanted to base U.S. foreign policy on the firm foundation of reality, you also could let the American people in on who is actually the principal sponsor of the terrorism that they’re concerned about: Al Qaeda, Islamic State, the Taliban – all Sunni-led outfits, none of which are backed by Shiite-ruled Iran. Yet, all we hear from Official Washington’s political and media insiders is that Iran is the chief sponsor of terrorism.

Of course, that is what Saudi Arabia, the Gulf states and Israel want you to believe because it serves their regional and sectarian interests, but it isn’t true. Saudi Arabia and the Gulf states are the ones arming and financing Al Qaeda and Islamic State with Israel occasionally bombing Al Qaeda’s military enemies inside Syria and providing medical support for Al Qaeda’s Syrian affiliate operating near the Golan Heights.

The reason for this unsavory network of alliances is that Israel, like Saudi Arabia and the Sunni-led Gulf states, sees Iran and the so-called “Shiite crescent” – from Tehran through Damascus to Beirut – as their principal problem. And because of the oil sheiks’ financial wealth and Israel’s political clout, they control how pretty much everyone in Official Washington’s establishment views the Middle East.

But the interests of Israel, Saudi Arabia and the Gulf states are not in line with the interests of the American people – nor the average European – who are not concerned about militant Shiites as much as militant Sunnis. After all, the worst terror attacks on Europe and the U.S. have come from Sunni extremists belonging to or inspired by Al Qaeda and Islamic State.

This bizarre feature of Trump’s executive order shows how deep Official Washington’s dysfunction goes. Trump has picked a major constitutional battle over a travel ban that targets the wrong countries.

But there’s a reason for this dysfunction: No one in Official Washington can speak the truth about terrorism without suffering severe political damage or getting blacklisted by the mainstream media. Since the truth puts Israel and especially Saudi Arabia in an uncomfortable position, the truth cannot be spoken.

There was some hope that President Trump – for all his irascibility and unpredictability – might break from the absurd “Iran is the principal source of terrorism” mantra. But so far he has not.

Nor has Trump moved to throw open the files on the Syrian and Ukraine conflicts so Americans can assess how the Obama administration sought to manipulate them into supporting these “regime change” adventures.

Assistant Secretary of State for European and Eurasian Affairs Victoria Nuland during a press conference at the U.S. Embassy in Kiev, Ukraine, on Feb. 7, 2014. (U.S. State Department photo)

But Trump has resisted intense pressure to again entrust U.S. foreign policy to the neoconservatives, a number of  whom lost their jobs when President Obama left office, perhaps most significantly Assistant Secretary of State for European Affairs Victoria Nuland, who helped orchestrate the violent overthrow of Ukraine’s elected president and is an architect of the New Cold War with Russia.

Other neocons who angled for jobs in the new administration, including John Bolton and James Woolsey, have failed to land them. Currently, there is pressure to ensconce Elliott Abrams, a top neocon dating back to the Reagan administration, in the key post of Deputy Secretary of State but that idea, too, has met resistance.

The neocon threat to Trump’s stated intent of restoring some geopolitical realism to U.S. foreign policy is that the neocons operate almost as an ideological cabal linked often in a subterranean fashion – or as I. Lewis Libby, Vice President Dick Cheney’s neocon chief of staff, once wrote in a cryptic letter to neocon journalist Judith Miller that aspen trees “turn in clusters, because their roots connect them.”

In other words, if one neocon is given a key job, other neocons can be expected to follow. Then, any Trump deviation from neocon orthodoxy would be undermined in the classic Washington tradition of strategic leaking to powerful media and congressional allies.

So far, the Trump inner circle has shown the administrative savvy to avoid bringing in ideologues who would dedicate their efforts to thwarting any significant change in U.S. geopolitical directions.

What is less clear is whether Trump, Tillerson and his fledgling State Department team have the intellectual heft to understand why U.S. foreign policy has drifted into the chaos and conflicts that now surround it – and whether they have the skill to navigate a route toward a safe harbor.