Exclusive: The New Cold War with Russia provides a stronger budgetary lifeline for the Military-Industrial Complex than the War on Terror does while helping to quiet critics of wasteful spending, as Jonathan Marshall describes.

The world’s mightiest navy is at risk of being sunk — not by a superior enemy, but by its own inability to acquire ships that work at a price that even the richest military on the planet can afford.

The U.S. Navy today has only 272 deployable warships — a decline of more than 50 percent in just the last three decades — of which fewer than a third put to sea at any given time. Although the U. S. Navy remains by far the strongest force of its kind, current fleet trends call into question its future ability to meet inflated global missions that include tracking Russian submarines in the Arctic, patrolling the Persian Gulf, and defeating China on its home seas. 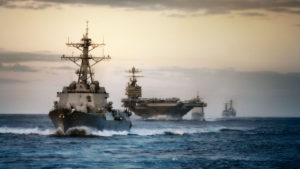 Rather than rethink those missions, the Navy is clamoring for more appropriations to pay for budget-busting weapons systems. For example, the Navy wants a dozen new ballistic-missile-carrying nuclear submarines at an estimated cost of about $140 billion. A single new Ford Class nuclear aircraft carrier will cost taxpayers nearly $14 billion — and that doesn’t include the inordinately expensive aircraft it will carry or the support ships needed to help protect it.

Now soaring costs and operating snafus are crippling a class of vessels the Navy was counting on to bulk up the fleet at relatively low cost: the littoral combat ship (LCS). A senior Pentagon official just admitted to Congress that ill-managed attempts to fast-track the design and construction of the LCS have all but “broke the Navy.”

The LCS began entering the fleet in 2008 for various missions in coastal waters. With high performance engines and fast hull designs, the ships were meant to outrun speedy patrol boats. With a modular design, they could be reconfigured for different missions, including surface combat, mine-sweeping and hunting submarines. Smaller and less heavily armored than a frigate, they were supposed to be highly affordable.

But over the past 12 months, five of the eight LCS ships acquired so far have been crippled by construction defects, design errors, or crew mistakes. The USS Milwaukee broke down just 20 days after putting to sea and had to be towed back to Virginia. The USS Freedom limped back to port after seawater leaks rusted its engine during a 26-nation exercise in the Pacific. The USS Fort Worth crawled back to San Diego from Singapore after discovering a mechanical fault. 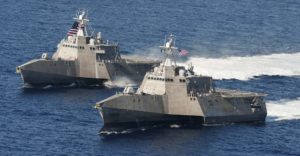 In August, the Navy ordered all LCS ships to “stand down” for 30 days and focus on evaluating crew training and operating practices. Even so, the USS Coronado broke down that month en route to Singapore. In September, the USS Montgomery suffered engine problems just three days after it was commissioned, forcing it to head back to Florida for repairs.

That was the backdrop for more bad news delivered Dec. 1 to the Senate Armed Services Committee. Paul Francis, an expert for the Government Accountability Office (GAO), reported that the cost per ship has more than doubled, from $220 million to $478 million, since the early days of the program. Delivery is running about nine years behind schedule. The LCS fails to meet Navy objectives for speed and range and its mission capabilities “remain largely unproven.”

He explained that the Navy, rushing to acquire the ships, adopted a “buy before you fly” approach, committing to a large number of ships (originally 55, now 40) before the design was complete and the kinks had been worked out.

“The miracle of LCS didn’t happen,” Francis testified. “We are 26 ships into the contract and we still don’t know if it can do its job . . . Once the money wheel starts to turn, the business imperatives of budgets and contracts and ship construction take precedence over acquisition and oversight principles.”

At the same hearing, the director of the Pentagon’s weapons testing office delivered a devastating, 30-page assessment. The LCS, he said, “has not yet demonstrated effective war-fighting capability in any of its originally envisioned missions: surface warfare, mine countermeasures, and antisubmarine warfare . . . Furthermore, all of the ships have suffered from significant and repeated reliability problems. . . . Unless corrected, the critical problems . . . will continue to prevent the ship . . . from being operationally effective or operationally suitable in war.”

Based on current performance, he added, the ships “have a near-zero chance of completing a 30-day mission (the Navy’s requirement) without a critical failure of one or more . . . subsystems essential for wartime operations.” 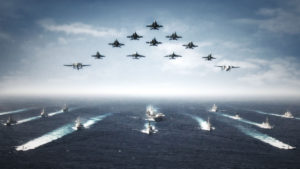 He also warned that the thinly armored aluminum ship is vulnerable to being knocked out of commission by a single enemy hit. Its one onboard gun defends poorly against aircraft or swarming patrol boats, and to date the LCS has “no capability to detect or defend against torpedoes.”

No problem; the Navy just “defined down” the ship’s mission. In 2012, the chief of naval operations, Admiral Jonathan Greenert, said he planned to keep the LCS out of a shooting war — using them instead for peacetime exercises, port visits, humanitarian assistance, and fighting pirates. By sending them to such relatively safe venues as Latin America and Africa, he explained, the Navy could free up more capable warships for riskier theaters.

The latest Navy plan is to buy 14 more of the ships, on top of the 26 already delivered or under contract, and to call a dozen of them frigates. The GAO’s expert asked the committee, “does a program that costs twice as much but delivers less capability than planned still warrant an additional investment of nearly $14 billion?”

You can be sure that Lockheed Martin, General Dynamics, and other military contractors with a stake in the program, will insist yes, of course.

So will the Navy, which hates losing battles of the budget as much as those at sea. Indeed, a joint statement to the committee by an assistant secretary of the Navy and the commander of naval surface forces insisted that the LCS “is of critical importance to our Navy,” provides “increased warfighting flexibility to our Fleet,” and offers “game changing [anti-submarine warfare] capability at an affordable cost.”

Although some members of Congress in both parties decry the program’s dismal record, most just want the pork to keep on coming. When the Pentagon last December proposed cutting the LCS program to 40 ships, hawks cried foul.

“Our Navy is at risk across the world and the weak and impotent Obama Administration seeks to further undermine our position with this ill-considered decision,” thundered Rep. Bradley Byrne, R-Alabama, a member of the House Armed Services Committee. “Make no mistake about it, from Mobile to Marinette, from San Diego and Jacksonville, the bell has rung, and those in the Pentagon need to hear that this will not stand.”

With the GOP soon to be in charge of both the White House and Congress, the Navy will likely get what it wants in the short term. Why “drain the swamp” when you can sail right through it? But if current budget trends continue, the math will inevitably defeat even the Navy’s greatest champions and force a fundamental reexamination of how it does business.

Jonathan Marshall is author or co-author of five books on international affairs, including The Lebanese Connection: Corruption, Civil War and the International Drug Traffic . Some of his previous articles for Consortiumnews include “Nazi Roots of Ukraine’s Conflict,” “Escalations in a New Cold War,” “European Union’s Imperial Overreach,” and “Kosovo Chaos Undercuts Clinton ‘Success.’”