Exclusive: The European Union’s haughty and hasty expansion into low-wage Eastern Europe may be its undoing, as the Brexit vote shows popular resistance to the westward migration of workers that followed, writes Jonathan Marshall.

While few analysts are putting it this way, the European Union suffers from a self-inflicted crisis of overexpansion — a form of “imperial overstretch,” if you will. The Brexit vote was just the latest symptom of this policy disaster, which also includes escalating confrontations with Russia and the ongoing crisis in Ukraine.

Public opinion polls in the United Kingdom established that widespread concern over immigration was the single most important factor driving voters to support an E.U. exit. Pro-Brexit campaigners made much of the statistics released just last month that net annual migration into the U.K. reached a third of a million people in 2015, double the rate just three years earlier.

Such numbers fed public concerns over the impact of immigrants on the country’s National Health System and other social services, as well as jobs. They also fed deep suspicions about government credibility.

As the Guardian reported after the stunning election victory for the Brexit camp, “David Cameron’s failure to give a convincing response to the publication of near-record net migration figures in the first week of the EU referendum campaign has proved to be its decisive moment.

“The figure of 333,000 not only underlined beyond any doubt that Britain had become a country of mass migration but also meant politicians who claimed they could make deep cuts in the numbers while Britain remained in the European Union were simply not believed.”

The influx of these newcomers had a deeper psychological effect on the public. “The British government’s inability to control (intra-European) migration is seen as emblematic of a wider loss of control,” wrote Oxford political theorist David Miller just before the election. “Many Britons feel that they are no longer in charge of their own destiny: ‘Take back our country’ is a slogan that resonates along the campaign trail.”

Roughly half of immigrants to the U.K. in recent years have come from other E.U. countries, taking advantage of the association’s fundamental commitment to the free movement of people. Their large numbers reflected the enormous expansion of the E.U. since 2004 — and the lure of Britain’s relatively affluent economy to poor workers from newer members like Poland and Romania. 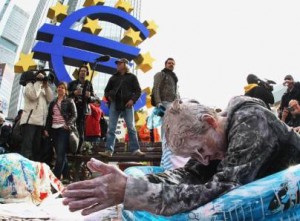 A European protest against the austerity policies that have been imposed in the euro zone, inflicting mass unemployment across much of the Continent. (Photo credit: occupywallst.org)

The E.U. — which actually has a commissioner for “enlargement” — has expanded relentlessly without heeding concerns from grassroots constituents of its traditional core members. In 2004, the E.U. absorbed Cyprus, the Czech Republic, Estonia, Hungary, Latvia, Lithuania, Malta, Poland, Slovakia and Slovenia — all low-wage countries with much lower standards of living than the likes of Germany, France or the U.K. In 2007, it also took in Romania and Bulgaria.

Official statistics show that citizens of these newer and poorer E.U. members account for nearly a third of net migration into the U.K. in recent years.

Although many economists defend free labor movement as good for the economy overall, the result — like that of free trade with low-wage countries — can harm less-skilled workers.

In 2011, two unpublished reports commissioned by the Department of Communities and Local Government made that point.

One warned senior government officials that sharply rising immigration could “increase tensions between migrant workers and other sections of the community” during the country’s recession. Another noted a huge rise in immigrants settling unexpectedly in rural areas, and concluded they were having “a negative impact on the wages of UK workers at the bottom of the occupational distribution.”

“We under-estimated significantly the number of people who were going to come in from Eastern Europe,” conceded Ed Milliband, leader of the Labour Party. “Economic migration and greater labour market flexibility have increased the pressure faced by those in lower skilled work.”

Ironically, many of the localities that voted most decisively for Brexit had relatively low migrant populations. But many of them are still suffering from economic austerity and sharp reductions in the social safety net imposed by the Conservative government since 2010.

“Switching the scapegoat from the government to the faceless migrant . . . is easier when people are scared for their livelihood, and more convenient for the politicians campaigning on both sides,” remarked the London-based writer Dawn Foster.

Voters were easily persuaded that “distant” and “faceless” E.U. bureaucrats just didn’t grasp their concerns. Indeed, the E.U. remains bent on continued expansion. It is currently in membership discussions with Albania, Macedonia, Montenegro, Serbia and Turkey, and recognizes Bosnia and Herzegovina and Kosovo as potential members.

The E.U.’s expansionist drive has had other costly repercussions for Britain and the rest of Europe. One notable disaster was its drive for an “association agreement” with Ukraine, a wide-ranging treaty that included not only provisions for tight economic integration, but also a commitment over time to abide by the E.U.’s Common Security and Defense Policy and European Defense Agency policies. On both fronts, the agreement was designed to pull Ukraine out of its traditional Russian orbit.

The E.U.’s expansion into Ukraine, like its expansion into the rest of Eastern Europe, was paralleled by the expansion of the NATO military alliance into the same countries, contrary to promises by Western leaders to their Russian counterparts in 1990. In 2008, NATO’s secretary general — backed by President George W. Bush and presidential candidate Barack Obama — pledged that Ukraine would be granted NATO membership.

Needless to say, Russia reacted badly, as it did to the E.U.’s later power play. It pressured the government of President Viktor Yanukovych to resist entreaties by NATO and the E.U. His refusal to break with Russia in turn triggered the so-called “Euromaidan” protests and the Western-backed putsch that ousted his government in February 2014.

Within a month, the new pro-European and pro-U.S. prime minister, Arseniy Yatseniuk, had signed the political provisions of the E.U. agreement. Just months later, he declared that he would seek NATO membership as well.

The result has been a bloody civil war in Eastern Ukraine; dangerous and costly military confrontations between Russia and NATO; and mutual economic sanctions that impoverish both Russia and the E.U.

Future historians will help us understand the underlying sources of the E.U.’s self-destructive expansion. No doubt they include some combination of ideological faith in the universality of European values, bureaucratic aggrandizement, and pandering to neo-liberal elites. Whatever the causes, the results now threaten the entire European project.

The E.U.’s future will require serious self-examination on many fronts, but especially about its grandiose ambitions for expansion.

Jonathan Marshall is author or co-author of five books on international affairs, including The Lebanese Connection: Corruption, Civil War and the International Drug Traffic (Stanford University Press, 2012). Some of his previous articles for Consortiumnews were “Risky Blowback from Russian Sanctions”; “The US Hand in the Syrian Mess”; “Hidden Origins of Syria’s Civil War”; and “Israel Covets Golan’s Water and Now Oil.”]