President Obama is playing a reckless game as he winks at Saudi and other Sunni oil-state support for al-Qaeda affiliates in Syria, with the very real possibility that the secular government will collapse and the terrorist black flag will be hoisted over Damascus, writes Gareth Porter.

News media coverage of the Camp David summit between President Barack Obama and Gulf Cooperation Council members has focused largely on Obama’s success in getting the GCC States to go along with the negotiation of a nuclear agreement with Iran. But the much more consequential story of the summit is Obama’s decision not to confront Saudi Arabia and Qatar about their financing of an al-Qaeda offshoot in Syria that has made the most dramatic gains in the jihadist war against Bashar al-Assad’s regime.

For months the conflict between the policies of the Obama administration and those of Saudi Arabia and Qatar toward the war in Syria has been sharpening. The U..S policy has been to arm and train several thousand rebels to fight only against Islamic State forces, whereas the Saudis and Qataris have embarked on a new initiative with Turkey to beef up the capability of Jabhat al Nusra (the Nusra Front), the official al-Qaeda affiliate in Syria, and its jihadist allies by creating a new military coalition in Idlib province to capture territory from the Assad regime. 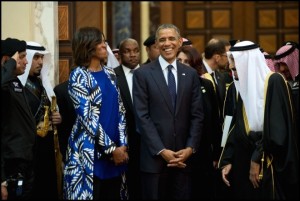 King Salman shares a laugh with the President and First Lady during a state visit to Saudi Arabia on Jan. 27, 2015. (Official White House Photo by Pete Souza)

A source in the Saudi royal family involved in defense and security matters confirmed for this article the existence of the new military coalition and the Saudi and Qatari assistance to it. The source said that the Army of Conquest is a temporary coalition in the Idlib region in which Jabhat al Nusra and Ahrar al Sham, which is believed to be heavily influenced if not controlled by al-Qaeda, represent 90 percent of the troops.

The Saudis and Qataris provide funding for 40 percent of the coalition’s requirements, according to the source, whereas the coalition itself provides 60 percent of its own needs mainly from capture. A founding member and senior official of Ahrar al Sham, Mohamed Bahaiah, has revealed in social media posts associated with the organization that he is a senior al-Qaeda operative. Both Jabhat al Nusra and Ahrar al Sham have cut their ties with the Islamic State group, although Ahrar al Sham has fought alongside the Islamic State in the past.

The new coalition surprised foreign observers by capturing the province capital of Idlib on March 28 the most important development in the Syrian war since the capture of al Raqqa by the Islamic State in May 2013. The Institute for the Study War in Washington, DC called the coalition’s seizure of Idlib “a victory for al-Qaeda in Syria” and predicted that many in the global jihadist community would view it as a vindication of al-Qaeda’s grand strategy.

In light of those facts, one might expect the Saudi role in creating the new Nusra-dominated force to provoke a confrontation of some sort at the summit. In a column last October, the Washington Post’s David Ignatius had reflected the Obama administration’s irritation over a 2013 operation by Turkey, Qatar and the UAE that had delivered arms to Syrian groups that ended up in the hands of Jabhat al-Nusra and the Islamic State.

The column had appeared on the same day that Vice-President Joe Biden, answering a student’s question at Harvard University, had said Turkey, Saudi Arabia and the UAE had “poured hundreds of millions of dollars and tens, thousands of tons of weapons into anyone who would fight against Assad.” The result, he said, was that “the people who were being supplied were al-Nusra and al-Qaeda and the extremist elements of jihadis coming from other parts of the world.” (Biden later apologized to Turkey and the UAE for “any implication” that the supply of al-Nusra or al-Qaeda had been intentional.)

Now the Saudi and Qatari governments are aiding al-Nusra Front and its fellow al-Qaeda front Ahrar al Sham quite deliberately, and the policy had seriously increased the threat of an al-Qaeda seizure of power in Syria, even though al-Qaeda was at least for now –  openly opposing the Islamic State.

But the administration’s foreign policy priorities have shifted dramatically. Defending the nuclear agreement under negotiation with Iran from domestic or foreign attack has become the overwhelmingly primary political consideration in relations with the Saudis.

When Obama spoke by telephone with King Salman on April 2, five days after the fall Idlib to the Nusra Front, there was no hint of dissatisfaction with the Saudi role in bankrolling the al-Qaeda spin-off there. Instead Obama was reported by the White House to have focused solely on Iran’s “destabilizing activities in the region” and the assurance that the nuclear negotiations with Iran “would not lessen U.S. concern” about those activities.

In a column on May 12, just before the Camp David summit, Ignatius described the new arrangement under which Turkey, Saudi Arabia and Qatar had begun supporting Nusra as leading to major military gains by the “Army of Conquest” and tipping the balance in the Syria war against the Assad regime. He referred to the fact that the Saudi-Qatari initiative was helping al-Qaeda in Syria as a “tricky problem,” but suggested that it was manageable, because it was “likely that in the coming days a Jabhat al-Nusra faction will split publicly from al-Qaeda and join the Army of Conquest.”

The GCC States came to the summit hoping that they have could get the Obama administration to support a “no-fly zone” on the Syria-Turkey border, according to diplomatic sources in Washington. But Obama was holding out for a different deal. Immediately after the summit, Ignatius reported that both sides had gotten what they wanted. The Saudis and their GCC allies got “assurances of American willingness to challenge Iranian meddling in the region,” while Obama got the official endorsement of the GCC for the nuclear deal.

As part of the bargain reached at the summit the Obama administration agreed, in effect, to accept that Saudi Arabia and Qatari would continue to finance al- Nusra’s new military power. The issue was covered in a very long annex to the joint statement, which said: “GCC member states decided to intensify efforts to combat extremist groups in Syria, notably by shutting down private financial flows or any form or assistance to ISIL/DAESH (IS), Al-Nusra Front, and other violent extremist groups.”

But in reality, Obama reached a different understanding with Riyadh and Doha on the issue. As Ignatius formulated the U.S. position at the summit, “Obama and other US officials urged Gulf leaders who are funding the opposition to keep control of their clients, so that a post-Assad regime isn’t controlled by extremists for IS or al Qaeda.”

The Saudis are not backing away from their Syria policy. The Saudi royal family source said the reason for the assistance to the Nusra-dominated coalition is “because there are no other options for Riyadh.” The Saudis had tried to assist the Free Syrian Army in the past, he said, but that choice had “failed miserably.” And since Saudi “could never support ISIS,” which he described as “a main enemy,” this is “an arrangement by necessity”.

Obama is well aware that the fall of the Assad regime is likely to result in a terrorist regime in Syria. His decision to tolerate at least for now – Saudi and Qatari policies that make that outcome far more likely appears to reflect little more than a personal political interest. But the longer-term consequences and eventual political blowback from that decision could be enormous, which suggests that Obama will have to revisit the issue relatively soon.

Gareth Porter is an independent investigative journalist and winner of the 2012 Gellhorn Prize for journalism. He is the author of the newly published Manufactured Crisis: The Untold Story of the Iran Nuclear Scare. [This story previously appeared at Middle East Eye.]

← Why Islamic State Is Winning
One More Casualty of US Wars →