Exclusive: President Obama’s reelection was a victory for him and the Democrats but also for the principles of democracy. The Republicans sabotaged the economy, sought to suppress the vote and flooded TV screens with attack ads, but young people and minorities led the way in rejecting these tactics, says Robert Parry.

In the end, after a long ordeal lasting much of the last four years, the American people rejected the politics of Republican hostage-taking. Rather than reward the GOP for making the U.S. economy “scream,” voters by a margin of nearly three million ballots reelected President Barack Obama.

The ruthless Republican strategy began on the day Obama took office, Jan. 20, 2009. It was a plan to delegitimize, denigrate and destroy the first African-American president. But it failed as young people, blacks, Hispanics and other minorities rallied to defend their choice from four years ago, turning out in strong numbers and refusing to submit. 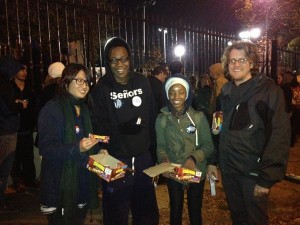 Some young Obama voters were passing out granola bars to people waiting in a long line to vote. (Photo credit: barackobama.com)

Though President Obama’s numbers were down among whites, who increased their support for the Republican candidate compared to 2008, other demographic groups, including women, voted for Obama’s reelection in overwhelming numbers.

In doing so, the voters not only rejected the GOP scheme of taking the U.S. economy hostage (by obstructing Obama’s proposals to create jobs and forcing a crisis over the nation’s credit rating last year), but they withstood Republican efforts to suppress their votes, and they rebuffed the unprecedented expenditure of hundreds of millions of dollars lavished on attack ads mostly paid for by pro-Republican billionaires.

So, Election Night turned out to be a great night for American democracy. The most brazen offensive by plutocrats in modern U.S. history had been turned back. Besides Obama’s reelection, Democrats actually gained seats in the U.S. Senate, contrary to the expectation that they might lose their majority.

The GOP did retain its majority in the House of Representatives benefiting from redistricting in many states controlled by Republican governors and legislatures but it appears the Republican majority will be several seats smaller after a few close races are decided.

Thus, the big question on the day after this GOP debacle is whether the defeat will lead to the kind of soul-searching that could convince the Republicans to look in the mirror and begin to remake themselves more in the image of the responsible pro-business party that many of us remember from the Eisenhower era of the 1950s.

Will the Republicans finally repudiate the win-at-all-cost tactics of Richard Nixon, including his Southern Strategy and its not-so-subtle appeals to racism and xenophobic resentments? Will the GOP accept facts and science on crucial issues like global warming or will the party continue to insist on fantasies and rely on propaganda?

Will the Republicans finally recognize that the American Republic was created by Founders who embraced government as crucial to build the nation and who devised the Constitution to create a vibrant central authority with strong powers to promote the “general welfare”? The Framers did not disdain government as today’s Tea Party pretends. [See Robert Parry’s America’s Stolen Narrative.]

The answers to these questions will not be easy for the GOP, which has not only internalized ruthlessness over the past four-plus decades but has implanted know-nothingism in the party’s DNA. And the Republicans have generally profited from this approach. It’s hard to abandon tactics that have worked. [For more on this topic, see Consortiumnews.com’s “How to Save the GOP.”]

There’s also the reality of the Right’s massive infrastructure of angry media personalities, mercenary think tanks and ugly attack groups all of which have a strong self-interest in the status quo. Even if some GOP leaders wanted to change course, they’d have to confront these entrenched propagandists, the likes of Rush Limbaugh, Glenn Beck and Fox News, ready to denounce any responsible Republicans as traitors.

Faced with this prospect of internecine warfare, the Republican Party might well opt to just continue down the same path toward consolidating the white vote and suppressing the votes of others, while investing even more in propaganda to create public confusion and resuming the GOP’s obstructionist ways.

But the hard truth for the Republicans is that those tactics didn’t succeed in 2012. The GOP took the U.S. economy hostage and told the American people that their only choice was to elect Mitt Romney and then follow the instructions from the Republican Congress.

← A New Day for Mideast Negotiations
Hopeful Signs in US Election →

33 comments for “A Great Night for US Democracy”