The U.S. political process still has many flaws, but the voters turned back the most brazen assaults on democracy, from plutocrats trying to buy the election to Republicans seeking to suppress the votes of minorities. Fairness on gay marriage and other social issues also won, writes William Boardman.

Election 2012 probably doesn’t prove anything, but it provides some evidence for the hopeful proposition that: even when the game is rigged, the cheaters lose. Some examples:

MONEY. Even though the Supreme Court’s Citizens United decision allowed gross amounts of money (almost $6 billion) from known and unknown donors to distort the process, few elections near the top of the ballot appear to have been bought. But the down-ballot races may be most of the iceberg. 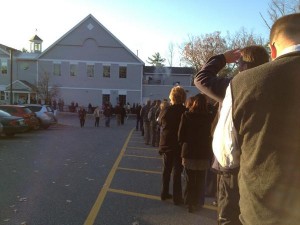 Big money may not have overwhelmed the electoral system in 2012, but that’s far from saying big money doesn’t control too much of government and too many public officials.

PROCESS. Even though hyper-partisan Republican legislators, election officials and outside groups made a concerted effort by a variety of means to suppress voting by likely Democratic-leaning constituencies, there was sufficient pushback from the courts, the Justice Department and professional election officials to allow the democratic process to function pretty well.

Something like a fair and open election seems to have taken place in 2012, but the people who attacked the process mostly remain in power. Their gerrymandered Congressional districts will remain in place until the next census, in 2020. Unless these people begin to re-think their beliefs, they will continue to have strong motivation to skew the electorate in any way they can, and they will likely try.

PROPAGANDA. The results of Election 2012 may also support another hopeful proposition: denying reality is not as good a path to political victory as it used to be.

Maybe, there are positive portents, some straws in the wind:

OBSTRUCTIONISM. Republicans in Congress (and out) preferred to perpetuate economic suffering rather than risking the perception that the President had any success. Enough of a less than grateful nation understood this treacherous blackmail to prevent it from succeeding.

WOMEN. Maybe it’s not God’s will when rape produces pregnancy. Candidates who believed it was ended up losing races they could have won. That was the will of the electorate.

MARRIAGE. The idea that two people who want to get married should have that right in modern America was endorsed by electorates for the first time. False gender stereotypes and appeals to a false notion of “traditional marriage” lost some of their power to cloud people’s minds.

MARIJUANA. “Reefer Madness” propaganda failed to persuade voters in two states. The dishonesty and stupidity of the “war on drugs” is becoming obvious to a majority of Americans. Does that majority include the President yet?

RACE. Years of overt and covert racism failed to prevent the President’s re-election. Is the country post-racial yet? Hardly. But people who agree with what Bill O’Reilly means when he says, “it’s not a traditional America anymore,” are part of a slowly contracting minority.

Some scales have fallen from some eyes, but the country still suffers from many chronic delusions. Probably the most dangerous is the near hysterical fear of Iran having a nuclear weapon.

We also remain deluded about the efficacy of nuclear weapons generally, as well as the rationality of nuclear power. And we still imagine that we’re so exceptional that we can and should work our will anywhere we want in the world. Even if we could, it wouldn’t be a good idea.

The totality of the election was not a victory so much as an escape from defeat. But there were enough smaller, real victories across the country to make the larger victory seem almost possible again.

7 comments for “Hopeful Signs in US Election”