Exclusive: The Tea Party’s revisionist history of the nation’s founding document may play well with the ill-informed, but the truth is the framers of the Constitution were fed up with state “sovereignty” and decided on a strong central government, a judgment that has served the United States well, writes Robert Parry.

After the Constitutional Convention in 1787, Benjamin Franklin, its oldest and possibly most renowned delegate, recommended that the new American political framework could be a model for Europe, suggesting “a Federal Union and one grand republic of all its different states and kingdoms, by means of a like Convention.”

Of course, Franklin’s suggestion fell on deaf ears in Europe where nation states already had long histories of deep-seated grievances against one another. Forming an enduring union proved hard enough for the 13 American states with their much shallower differences. 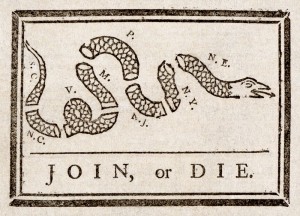 Ignoring Franklin’s advice, Europe remained sharply divided and those rivalries threw the world into periodic fits of bloody chaos. Two powerful dictators Napoleon and Hitler would try and fail to unify the Continent by force. It would not be until the last half of the 20th Century when a loose federation of democratic European states would take shape as the European Union.

However, the current European financial crisis highlights the shortcomings of the EU, particularly how the European nations retain much of their old sovereignty and keep control over key policies, particularly their budgets making it difficult to coordinate fiscal strategies behind a common currency, the euro.

Indeed, today’s European Union resembles more the ineffectual Articles of Confederation, which governed the United States from 1777 to 1787, than the U.S. Constitution with its strong central government. The Confederation’s Article II declared that “each state retains its sovereignty, freedom, and independence, and every power, jurisdiction, and right, which is not by this Confederation expressly delegated.”

The United States wasn’t really even a government or a nation then. It was called “a firm league of friendship” among the states. General George Washington was particularly contemptuous of this concept of “state sovereignty” because he had watched his soldiers freeze and starve when the states reneged on promised contributions to the Continental Army.

So, with George Washington in the lead and fellow Virginian James Madison serving as architect, some of America’s most distinguished citizens, including Franklin, met in secret in Philadelphia to devise a governing framework that eliminated the independence of the states and subsumed their sovereignty into a binding Union.

The new American system concentrated the key national powers, from currency to defense to commerce, in the central government (though leaving more local matters to the states and municipalities). The framers wanted a vibrant central government that could tackle the present and future needs of a vast nation and that is what they achieved.

Despite some moral compromises like tolerating slavery and despite decades of struggle against forces that objected to the dominant power of the federal government the Constitution has worked pretty much as the Founders intended. It has proved, by and large, to be a flexible governing arrangement that enabled the United States to adapt to changes and to emerge as the world’s leading nation.

However, even today, influential political movements, such as the Tea Party and much of the Republican Party, continue to attack what has been the most effective feature of the Constitution, its potential for providing national solutions to national problems.

Earlier political attacks on the Constitution were more frontal such as the Nullificationists in the 1830s and the secessionists of the Confederacy in the early 1860s essentially reasserting the states’ independence that had been lost in the drafting and ratification of the Constitution.

Today’s assault is more modern, based on a combination of widespread ignorance about American history and disinformation spread through a pervasive propaganda network. Rather than defying the Constitution, today’s nullificationists simply revise the history to their liking under the guise of divining the Founders’ “originalist” intent.

It has become a touchstone of the American Right that the Founders wanted a weak central government and were big-time advocates of states’ rights. Tea Partiers also dress up in Revolutionary War costumes and pretend that the enemy of that time must have been Philadelphia, not London. They seem to think that their coiled-snake “Don’t Tread on Me” flag was aimed at fellow Americans, not the British.

In the real history, the banner that addressed the American colonists was one devised by Franklin showing a snake cut into pieces, representing the colonies/states with the warning, “Join, or Die.”

If Tea Partiers directed their snake venom at the creators of a strong American nation-state back then the targets would be the likes of Washington, Madison and Franklin. But today’s right-wingers simply ignore the historical fact that Madison inserted the crucial Commerce Clause quite deliberately into the Constitution because he felt a national strategy on commerce was vital if the United States was to fend off predatory European competition.

And, the whole point of giving the U.S. central government control over interstate commerce was so the country could implement national solutions to national problems. That was why even a conservative U.S. Appeals Court judge, Laurence Silberman, ruled recently that the Affordable Care Act (Obamacare) was constitutional, because he recognized that Congress has broad powers to devise responses to challenges that impact the nation’s commerce.

Citing the intent of the Founders and longstanding legal precedents, Silberman concluded that the law even its requirement for individuals to obtain health insurance fits within the Constitution (though it’s still very possible that the Republican partisans on the U.S. Supreme Court will reverse Silberman’s ruling to deal President Barack Obama a political body blow right before the election.)

After all, the Right has spent years now building up its false founding narrative with the same kind of determination and resources that it has invested in many other false narratives. For that reason, many more people know the Right’s argument that the Tenth Amendment is determinative on state’s rights than understand that it was more a case of closing the barn door after the horse was gone.

The Constitution already had granted broad powers to the federal government including regulation of national commerce so there were far fewer powers left for the states. The Tenth Amendment amounted to a minor concession to mollify the anti-federalist bloc that unsuccessfully sought to block ratification of the Constitution by the 13 states.

To further appreciate how modest the Tenth Amendment concession was, you also must compare its wording with Article II of the Confederation, which is what it essentially replaced. Remember, Article II says “each state retains its sovereignty, freedom, and independence, and every power, jurisdiction, and right, which is not by this Confederation expressly delegated.”

All that language is either eliminated in the Constitution or substantially watered down. In effect, the power relationship between the federal government and the states was reversed by the Founders who convened in Philadelphia in 1787.

The Tea Party’s misguided “history” of the Founding is also reflected in how little some of the Right’s champions know about real Revolutionary War history. For instance, Texas Gov. Rick Perry told some voters that the Revolution was fought in the 1500s, a couple of centuries off, while Rep. Michele Bachmann claimed the opening shots of the Revolution were fired in New Hampshire, rather than Massachusetts.

But the current irony of the Right’s revisionist history on the Constitution is that it comes at a time when the financial crisis in Europe and its inability to adopt a comprehensive regional solution underscores the wisdom of America’s Founders to create a strong national government.

The Right’s neo-Confederate assault on the Constitution also comes at a time when innovative national solutions are desperately needed for the American people, both to respond to the economic recession caused by the Wall Street crash of 2008 and to address long-term problems that threaten the welfare of the nation, from the health-care crisis to a decaying infrastructure to cataclysmic climate change.

To take on these pressing national challenges through unified national action would be precisely what George Washington, Benjamin Franklin and James Madison had in mind.

24 comments for “The Founders’ True Foresight”