In political philosophy, the idea of a social contract is that the individual surrenders some rights for the benefits of living in a civilized society that has reasonable rules for all. However, in recent decades, the greedy rich have torn up that contract, as Danny Schechter explains.

The conflict between property rights and human rights has entered a new chapter. It is a debate that goes back to the challenge by landowners and merchants behind the American Revolution’s war on British control over the colonial economy.

Only today, as those speaking in the name of the 99 percent challenge the super wealthy of the 1 percent (actually the .001 percent), there is a new battleground in what’s known as the housing market with as many as 14 million Americans in or facing foreclosure. 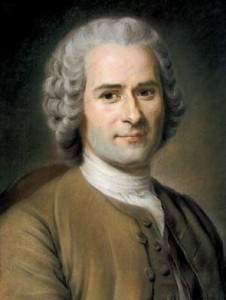 The defense of property rights is the holy of the holies for the propertied classes with a whole industry set up to enforce their claims of ownership.

We have seen how this plays out with the courts, run by often bought-off and complicit judges rubber-stamping claims by banks and realty interests even when laws are disregarded amidst fraudulent filings, biased contracts, and phony robot signings.

They control the marshals who seize your property and they constantly denigrate the real victims as “irresponsible.” It’s not surprising any more to read about banks foreclosing on properties they don’t even own.

European philosopher Jean-Jacques Rousseau, who postulated the “social contract” that gives property rights a moral claim, would be turning in his grave if he knew of the many abuses that homeowners in the U.S. face daily.

According to one scholarly presentation I read, “In order to clearly present Rousseau’s views on property in the Social Contract, we must first define what he means by property. Property according to Rousseau is that which is obtained legally thereby purporting legitimate claim to one’s holdings. Now we must consider what gives an individual the right to openly claim ownership.

“Rousseau points out that right does not equal might. In other words, having a right can never derive from force. A right must be given legitimately which means it is attached to moral and legal code. This makes it contractual whereby the rights of one are applied to the rights of all. Once a right is established, it is beneficial and necessary for the individual to apply this right effectively for his best interests and those of the whole.

“This motivation is directed at the formation of community thereby creating a social contract between individuals that come together to act as a group. Now a combination of rights is formed whereby each individual is protected by the whole group that stands together as a community.

“The concept is that man standing alone is more vulnerable than many men united each in defense of the other. This condition makes it impossible for one to hurt an individual without hurting the whole group or for one to hurt the group without affecting each individual.

“There is now a social contract where individual rights are combined. In this case, it is in the best interest of the individual to give over his rights to the group since he has a more powerful protective base than standing alone.”

And yet many of us today do “stand alone:” in the commercial marketplace where borrowers are seen as suckers by lenders and fraud is pervasive. Abuse, lying and theft are built into the equation.

Now President Barack Obama says, four years after the markets began melting down and the sub-prime mortgages were exposed as sub-crime, he will crack down on these abuses. Hallelujah.

It sounds good, and you want to believe, especially because Obama has tapped New York State Attorney General Eric Schneiderman, who has rejected settling with some banks engaged in massive frauds because it’s a deceptive deal, as a top gun for the effort.

The Justice Department has announced more details to the press, minus its own official who will run the effort. Lanny Breuer, assistant attorney general for the criminal division, was “traveling” and couldn’t make the press conference. Before joining the Department that calls itself Justice, Breuer was working for a law firm representing big banks, perhaps not a topic he wanted to answer questions about.

Attorney General Eric Holder was there to reveal that there will be 55 people working on this full-time, 30 attorneys and support people, and 10 FBI agents who first blew the whistle on “pervasive real estate fraud” back in 2004.

Yves Smith of NakedCapitalism.com who follows details like this closely was underwhelmed, writing: “During the Savings and Loan crisis, Bill Black reminds us that there were about a thousand FBI agents working on the various cases. That’s one hundred times the number of people working on a scandal that is about forty times larger and far more complex.

“To put it another way, let’s say that this scandal cost the American public $5-7 trillion in lost home equity. That’s about $100 billion of lost home equity per person assigned to this task force. If someone stole $100 billion a corporation, like say, if somehow Apple’s entire cash hoard which is roughly that amount, suddenly disappeared, I’m guessing that the FBI would assign more than one person to the case.”

Okay, these are tough times and the government is pressed and the President is running for reelection with his “bundlers” (i.e . the people who raise the big money) pressing the flesh on Wall Street to find more 1 percent donors. Will this fund-raising effort stymie his hell-raising effort? Stay tuned.

Adds Smith: “For the last eight weeks, nearly 200 federal examiners have labored inside some of the nation’s biggest banks to determine how those institutions would hold up if the recession deepened. Yup, roughly four times as many people were assigned to conduct sham stress tests as are assigned to investigate the causes of the financial crisis and prosecute the people responsible. So we see that this is a not a serious deployment of government resources to unmask a complex economy-shaking financial scheme. It just isn’t.”

No surprise there. And, as for the causes of the financial crisis, remember the commission that was created by Congress and that found the while disaster “avoidable.” It offered plenty of analysis but quickly led to paralysis with partisan bickering fogging the issues and no agenda for change forthcoming.

Matt Stoller, a former aide to former Rep. Alan Grayson, D-Florida, tries to unravel a massive contradiction that rises to the man at the top: “There are two underlying structural problems with the new(ish) Federal task force on financial fraud,” he writes. “One, it is the policy of the administration to protect the banking system’s basic architecture, which means the compensation structure and the existing personnel who run these large institutions.

“Any real investigation into the financial collapse will inevitably lead to the collapse of this architecture. Thus, any real investigation will be impeded when it begins to conflict the basic policy framework of the Obama administration. And this framework is set by Obama. It’s what he believes in. He made this clear in his first State of the Union, when he said a priority of the administration was to ensure that ‘the major banks that Americans depend on have enough confidence and enough money to lend even in more difficult times.’”

Perhaps this is why so few bankers have spoken out loudly about this latest effort to target their financial frauds. They know it’s not serious and recognize that political business, like the news business, is now a branch of show business.

And Jean-Jacques Rousseau is not talking either. He has been dead for more than two centuries, along with his social contract.

News Dissector Danny Schechter writes the NewsDissector.com blog, His film Plunder and book, The Crime of Our Time, examine financial frauds. (Plunderthecrimeofourtime.com)  He wrote the introduction to the Cosimo Books edition of the Financial Inquiry Report and hosts News Dissector Radio on PRN.fm.  Comments to dissector@mediachannel.org

2 comments for “Sundering the Social Contract”