Exclusive: The stupidity of the Republican presidential field seems to know no bounds, with Gov. Rick Perry’s putting the American Revolution in the 1500s and joining Rep. Michele Bachmann and the Tea Party in messing up the history of the nation’s founding, notes Robert Parry.

For people who supposedly revere the Founding Fathers and the Constitution, the Tea Party and its favored candidates seem to know little about the actual history of the Revolutionary War or why the Constitution was written.

Instead, the Right has spun an upside-down narrative of America’s founding era, much as the Right’s pervasive media has created false narratives about almost everything else, a disturbingly easy process given how ignorant some Americans are about their own history.

The latest example of this garbled history came from Texas Gov. Rick Perry on Tuesday night  when he placed the Revolutionary War in the 1500s, a couple of centuries before America’s Declaration of Independence in 1776 and even before the first permanent English settlement in the New World, Jamestown, Virginia, in 1607. 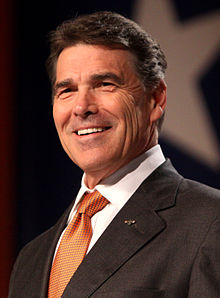 “Our Founding Fathers never meant for Washington, D.C. to be the fount of all wisdom,” Perry lectured. “As a matter of fact they were very much afraid of that because they’d just had this experience with this far-away government that had centralized thought process and planning and what have you, and then it was actually the reason that we fought the revolution in the 16th century was to get away from that kind of onerous crown if you will.”

Perry’s “history” lesson followed a similarly loony account from Rep. Michele Bachmann, R-Minnesota, who while pandering to Tea Party voters in New Hampshire told them, “You’re the state where the shot was heard around the world in Lexington and Concord.”

Of course, the Revolutionary War battlefields of Lexington and Concord are in Massachusetts. (Bachmann may have gotten confused because there is a Concord, New Hampshire.)

But the Tea Party’s rewriting of America’s founding narrative is more cynical than the know-nothingism of Perry and Bachmann. The Right has made a conscious effort to distort U.S. history into something that would have made the southern Confederacy proud, by wrapping its desire to maintain slavery inside the prettier trappings of the phrase, “states’ rights.”

The Confederates of yore and the neo-Confederates of today reinterpretted the Constitution as a document providing for a weak central government that must submit to the supremacy of the states. That bogus historical claim was the core point in Perry’s bungled “history” lesson on Tuesday night.

To push this revisionist history of the Constitution (under the guise of “originalism” or “strict constructionism”), the Right ignores what the Founders were up to when they convened the Constitutional Convention in 1787. They were set on replacing the weak central government in the Articles of Confederation with a strong one in the Constitution.

Gen. George Washington, who presided over the convention in Philadelphia, was one of the strongest advocates for a powerful central government because he had experienced as commander-in-chief of the Continental Army the dysfunction of the Articles, which governed the United States from 1777 to 1787.

The lack of a federal taxing authority meant that Washington’s soldiers were at the mercy of the states’ contributions to the federal government for their pay and munitions and often those voluntary payments didn’t arrive.

Other Founders, especially the merchants and businessmen at the convention, understood the need for a unified national policy on commerce, so the new nation could compete with the economic powers around the world.

So, during the Constitutional Convention, the delegates from the 13 states agreed to scrap the Articles of Confederation in total and replace them with the Constitution, creating a dynamic central government possessing broad powers to tax, print money, make war, negotiate treaties, regulate national commerce and take a variety of other actions.

Another key change from the Articles of Confederation to the Constitution was the stripping out of language describing the “independence” and the “sovereignty” of the states. In effect, the Constitution transferred national sovereignty to “we the people of the United States” and to the Republic that the Constitution created.

Often the Tea Party and the Right talk as if they haven’t actually read the Constitution, at least not in contrast to what it superseded in the Articles of Confederation.

The Articles had described the United States not as a government or even a nation, but as “a firm league of friendship” among the states. The Confederation’s Article II added: “Each state retains its sovereignty, freedom, and independence, and every power, jurisdiction, and right, which is not by this Confederation expressly delegated.”

Tea Party activists will often cite the Tenth Amendment to the Constitution as evidence that the Founders were strong advocates for states’ rights, since it says “The powers not delegated to the United States by the Constitution, nor prohibited by it to the States, are reserved to the States respectively, or to the people.”

But the Tea Partiers miss the point again. The Constitution granted broad powers to the federal government even the regulation of national commerce so there were far fewer powers left for the states. The Tenth Amendment amounted to a sop to mollify the anti-federalist bloc that was trying to block ratification of the Constitution by the 13 states.

To further appreciate how modest the Tenth Amendment concession was, you also must compare its wording with Article II of the Confederation. Remember, Article II says “each state retains its sovereignty, freedom, and independence,” while the Tenth Amendment simply says powers not granted to the federal government “are reserved to the States” or individuals.

Only years after the Constitution was adopted and the South began to appreciate that its agrarian economy and its institution of human slavery would be threatened as the North and the free states grew in industrial power and in immigrant population did an aggressive effort emerge to reinterpret the Constitution.

In the early 1830s, Southern politicians led the “nullification” challenge to the federal government, asserting that states had the right to nullify federal laws, such as a tariff on manufactured goods. In effect, the South was reasserting the states’ sovereignty principle that had been lost with the ratification of the Constitution.

“Nullification” was thwarted by President Andrew Jackson who threatened to deploy troops to South Carolina to enforce the federal supremacy established by the Constitution.

In December 1832, Jackson denounced the “nullifiers” and declared that “the power to annul a law of the United States, assumed by one State, incompatible with the existence of the Union, contradicted expressly by the letter of the Constitution, unauthorized by its spirit, inconsistent with every principle on which it was founded, and destructive of the great object for which it was formed.”

Jackson also rejected as “treason” the notion that states could secede if they wished, noting that the Constitution “forms a government not a league,” a reference to the line in the Articles of Confederation that had termed the fledgling United States ”a firm league of friendship” among the states, not a government.

The nullification crisis was defused, but a few decades later, the South’s continued resistance to the constitutional preeminence of the federal government led to secession and the formation of the Confederacy. It took the Union’s victory in the Civil War to firmly settle the issue of the sovereignty of the national Republic over the states.

However, the defeated South still balked at the principle of equal rights for blacks and invoked “states’ rights” to defend segregation during the Jim Crow era. White Southerners had amassed enough political clout, especially within the Democratic Party, to fend off civil rights for blacks.

The battle over states’ rights was joined again in the 1950s when the federal government finally committed itself to enforcing the principle of “equal protection under the law” as prescribed by the Fourteenth Amendment. Many white Southerners were furious that their system of segregation was being dismantled by federal authority.

The South’s anger was reflected in the prevalence of the Confederate battle flag on pickup trucks and in store windows. White Southerners were expressing the bravado of secession even if it was more tough talk than anything real.

That neo-Confederate spirit has resurfaced in today’s Tea Party movement with one early favorite, Gov. Rick Perry, musing about the right of Texas to secede from the Union if the state disagreed with federal policies.

Perry’s neo-Confederate interpretation of the Constitution reflects the Right’s success in distorting American history for political purposes. And Perry’s confusion about the century when the Revolution was fought is indicative of the stupidity that enables the false history to work.

The Right’s immense media infrastructure print, radio, TV and the Internet simply repeats the propaganda so often than many weak-minded Americans succumb to it.

So, American history gets turned inside-out. The Revolution was fought in the 1500s with the first shots fired in Lexington, New Hampshire. And the Founders replaced the Articles of Confederation with the Constitution because they wanted to assure the supremacy of the states over the federal government.