With Angela Merkel’s revelations of Berlin’s duplicity in its dealings with Moscow, Cold War II just got colder. 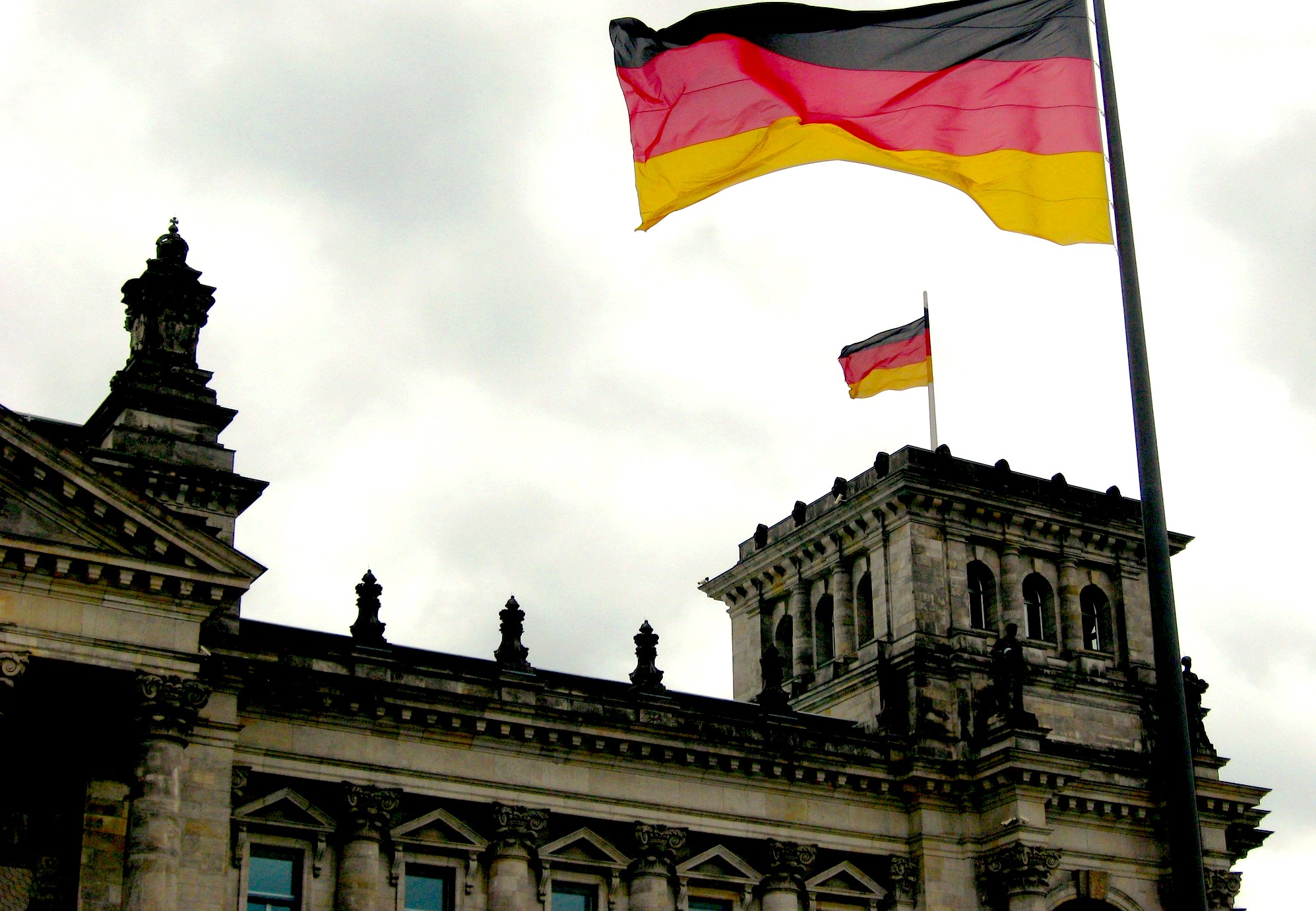 “Germany is Hamlet,” Gordon Craig once wrote. The great historian of that nation (1913–2005) was noted for pithy summations of this kind, insights that cast light into the innermost recesses of the German psyche, the what-makes-them-tick of its people.

Does Germany face westward to the Atlantic or eastward to the Eurasian landmass? From which tradition does it draw? Where lie its loyalties? These are questions geography; a rich, old culture; and a long, complicated history bequeathed to Germans. I do not think Craig meant to suggest this condition was burdensome. No, there was nothing to resolve. In its ambiguous state — in the West but not wholly of it, in the East but not wholly Eastern — Germany was most truly itself.

Germans lived this way, making no apologies, for a long time. They could allow the U.S. to station 200,000 troops on their soil — the figure at the Cold War’s end — while pursuing Willi Brandt’s Ostpolitik, the Federal Republic’s opening to the German Democratic Republic and by extension the whole of the East Bloc. It was Germany that invested with Gazprom, the Russian energy conglomerate, in the Nord Stream I and II pipelines even amid rising East–West tensions.

On the long drive into Moscow from Domodedovo International Airport, the broad thoroughfares are lined with German car dealers, German construction cranes, the factories of German companies. German businesses, along with many German citizens, were vociferous critics of the sanctions regime the U.S. imposed on Russia — and effectively on Europe, indeed — after the U.S.-choreographed coup in Kiev eight years ago set in motion the current crisis in Ukraine.

I read those two extraordinary interviews Angela Merkel granted Der Spiegel and Die Zeit last week against this history, this record, this ordained state of ambiguity. If there is one truth that may stand above all others in the former chancellor’s astonishing revelations of Berlin’s duplicity in its dealings with Moscow, it is that the Federal Republic has abandoned its inheritance — its natural state, indeed —and so the considerable responsibilities the past and geography awarded it.

It would be hard to overstate the significance of this turn for all of us. The global divide just got wider. Cold War II just got colder. The alienation of East and West is now down as a more or less permanent state of affairs. And the world just lost the one country capable of mitigating these dreadful circumstances by dint of its special, maybe singular position in the community of nations.

It is odd to consider the view of Prince Heinrich XIII, the German aristocrat just arrested for leading a plot to overthrow the Berlin government (a set of absurd allegations, I must mention right away, I do not for a minute take seriously absent credible evidence, and I do not expect we will ever see any). It seems the prince has long argued that Germany did not become a new nation after World War II but a wholly owned subsidiary of the U.S.

“We are not Germans. We are not in a real German state,” his alleged followers are quoted as saying in a (highly misleading) New York Times piece published Sunday. “We are just a branch of a GmBH,” this last meaning a limited liability company.

How strange to read this the same week that Merkel removed all doubt this is precisely the German condition — arguably since the early postwar years, certainly since Washington committed itself and its allies to its all-out, all-in campaign to bring NATO to Russia’s very doorstep and ultimately to subvert the Russian Federation.

And while I do not know much about the prince’s politics, how interesting to hear a German citizen object, in effect, that the Federal Republic has betrayed itself and its historical inheritance the very week its former chancellor told Germany’s leading newsmagazine and one of its leading dailies that the fruitful ambiguity of the nation’s past is gone now in favor of the manipulative, Russophobic dishonesty that lies at the heart of the proxy war the U.S. now wages against Russia in Ukraine.

As has been widely reported and excellently analyzed — except in the mainstream American press, where Merkel’s remarks last week go unmentioned — the former German leader described her cynical, treacherous betrayal of Moscow during negotiations of the two Minsk Protocols, the first signed in September 2014 and the second the following February. 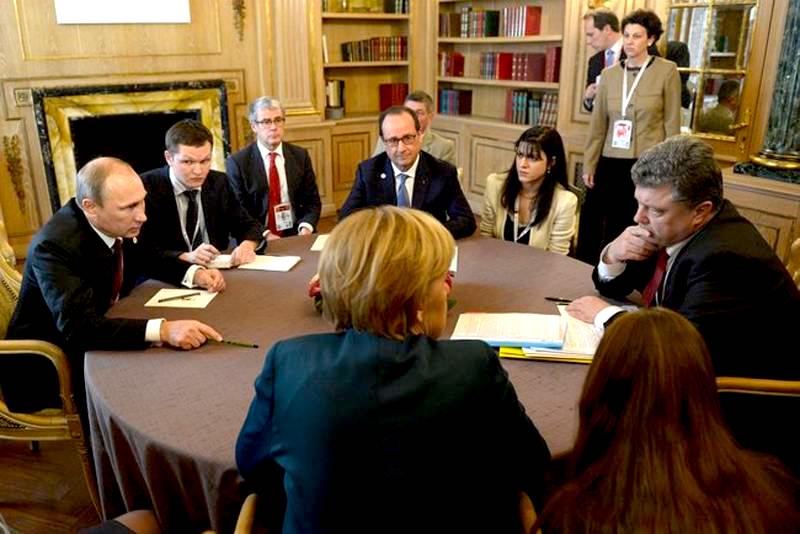 Berlin, Paris, the post-coup Kiev regime and Moscow were signatories to those accords. How well I recall the earnestness with which Russian President Vladimir Putin entered into the talks. How hopeful many of us were that, with Kiev having swiftly breached Minsk I, the second accord would produce what the Russian president sought — a lasting settlement that would leave Ukraine united and stabilize the security order on Russia’s southwestern border and Europe’s eastern flank.

Earlier this year Petro Poroshenko, Ukraine’s first post-coup president, shocked everybody when he stated publicly that Kiev never had any intention of honoring the commitments it made when it signed the Minsk Protocols: The talks in the Belarusian capital and all the promises were meant simply to buy time while Ukraine built fortifications in the eastern regions and trained and armed a military strong enough to wage a full-dress war of aggression against the Russian-tilted Donetsk and Lugansk regions.

There was never any interest in the federal structure envisioned in Minsk II. There was never any intention of granting the breakaway regions the measure of autonomy Ukraine’s history and its mixed languages, cultures and traditions called for. Committing to all that was a ruse intended to deceive Moscow and the Donbass republics while Ukraine rearmed and shelled the latter in anticipation of the war that broke out in February.

Shocking, O.K. But Poroshenko was a jumped-up candy magnate running the wildly irresponsible, rabidly Russophobic regime that had seized power in Kiev. So: Shocking but also in keeping with the conduct of a corrupt-up-to-the-eyebrows pack of nobodies with no notion or regard for statecraft or responsible governance.

It is another matter, to state the very obvious, for Merkel to say the very same things. The former chancellor was supposed to be leading the West’s diplomatic démarche along with François Hollande, France’s president at the time and plainly a junior partner to Europe’s most powerful political figure. By her own account, she was using diplomacy just as Kiev was, to scuttle the accord she pretended to sponsor. 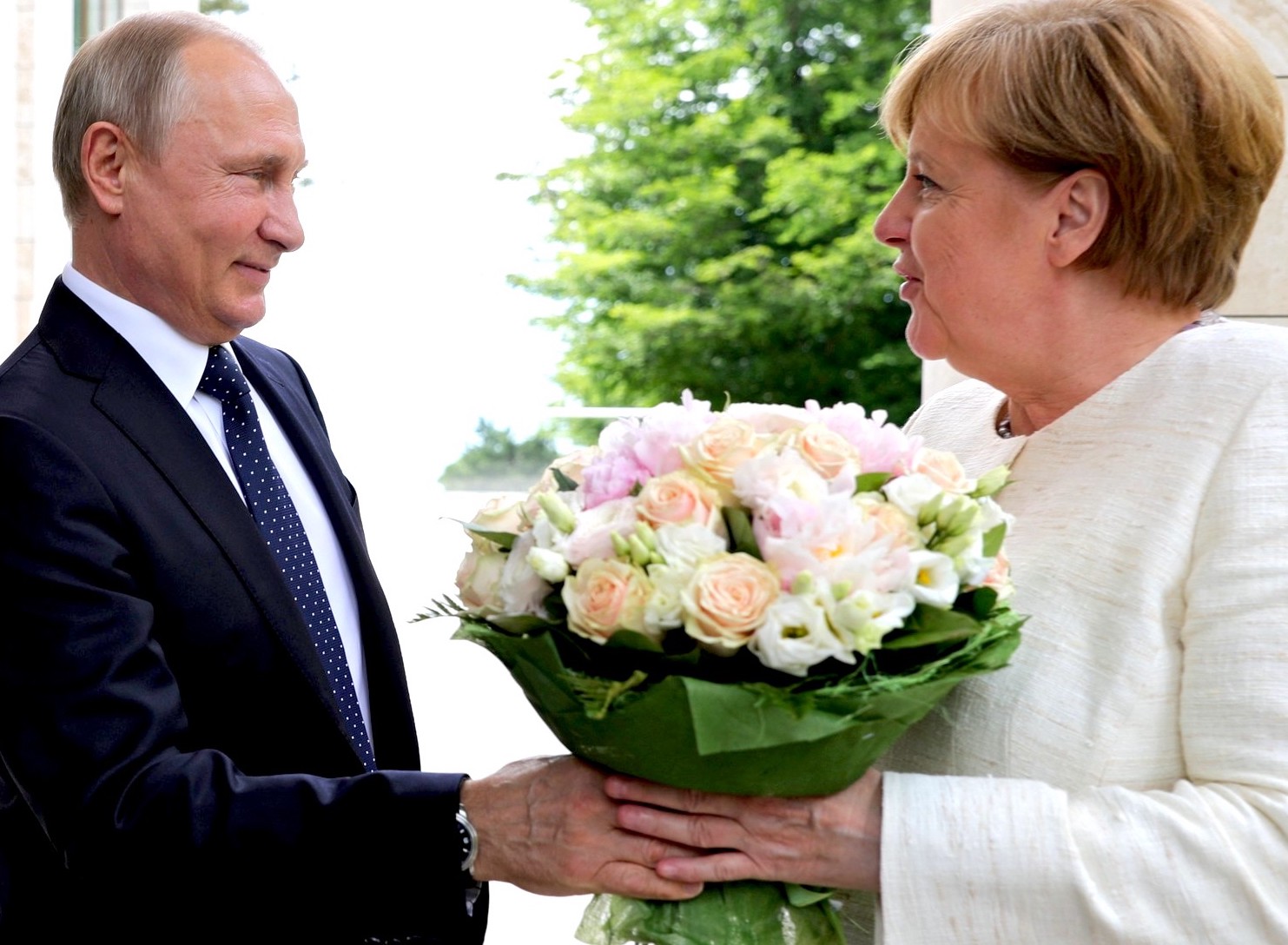 The U.S., to remind readers, was not part of the Minsk talks. On the one hand, it stood squarely against any settlement with either Russia or the breakaway regions. On the other, there was no point inviting the U.S. to Minsk because its position was obvious and its presence would be counterproductive. Now that Merkel has spoken of these matters, the German position seems to have been that the West needed the accord nobody in the West wanted if time was to be bought for Ukraine’s rearming.

Merkel’s interviews with Der Spiegel and to Die Zeit, which are here and here, were in the way of sprawling retrospectives during which friendly correspondents pitched a series of softballs to a chancellor given to looking back. Minsk and the Ukraine conflict were two topics among many. The documents give the impression that Merkel spoke casually and unguardedly of them. The damning passages are brief but very clear.

“She believes that… later during the Minsk talks, she was able to buy the time Ukraine needed to better fend off the Russian attack. She says it is now a strong, well-fortified country. Back then, she is certain, it would have been overrun by Putin’s troops.”

In Die Zeit, the second of the two interviews, Merkel described the Minsk talks as “an attempt to give Ukraine time… to become stronger,” later expressing satisfaction that this strategy — a straight-out abuse of the diplomatic process — has succeeded.

There are various interpretations of Merkel’s remarks. They are generally taken at face value, as an offhandedly delivered admission of her duplicity — and by extension the West’s — in her dealings with Russia on the Ukraine question. Moon of Alabama, a German publication, reads the interviews as Merkel’s attempt to protect her political reputation as Germany’s leadership circles succumb to the kind of Russophobia common in the U.S. but not, heretofore, in the Federal Republic.

I find both of these readings plausible. Either way, the important topic now before us is the damage Merkel did in 2014 and 2015 and the consequences of her comments last week. 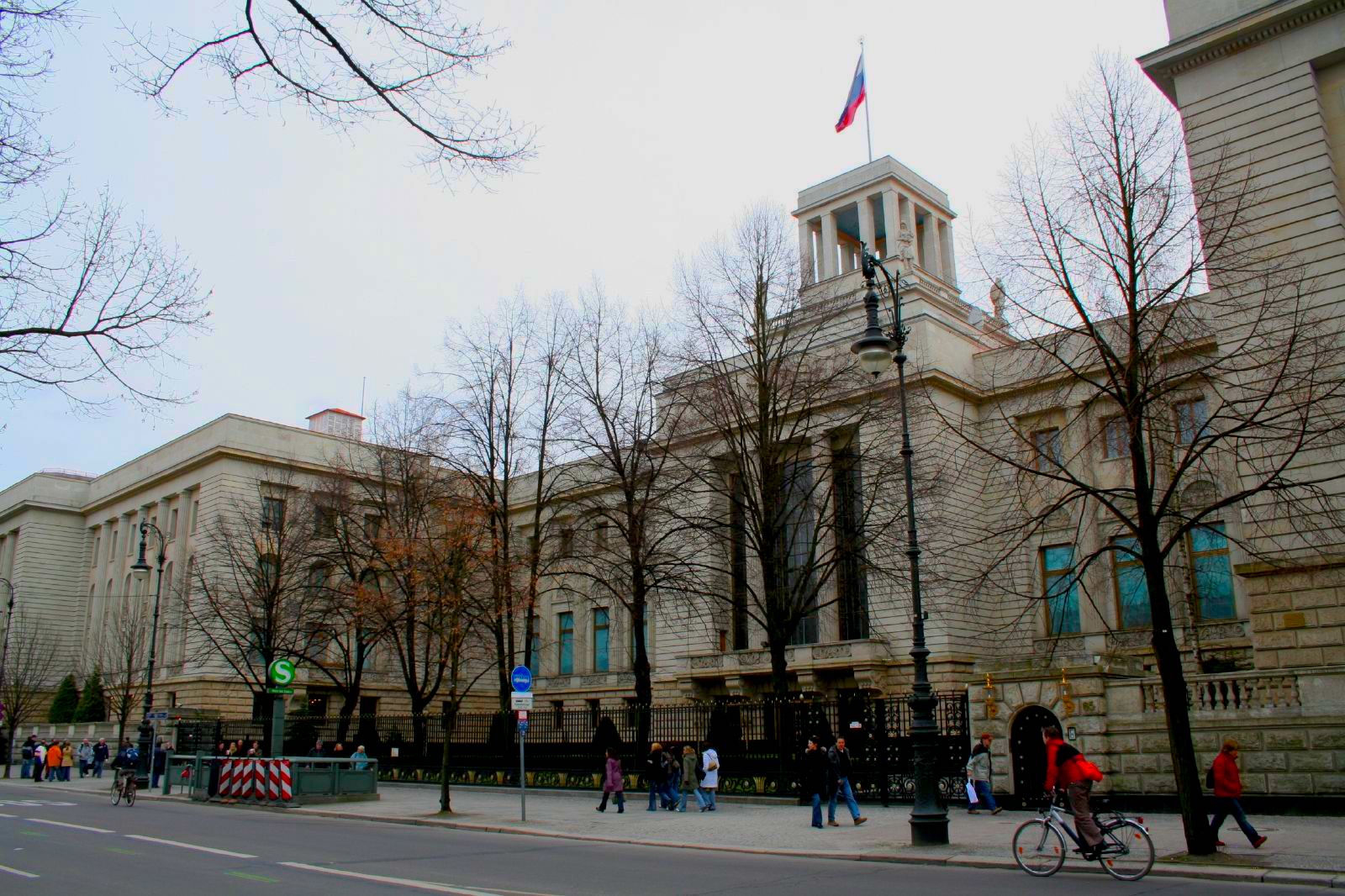 Much has been written and said about the fatal blow that Merkel dealt to trust in diplomatic affairs, and I think “fatal” is our word. Ray McGovern was eloquent on this topic, bringing a lifetime’s professional experience to the question, during a long exchange with Glenn Diesen and Alexander Mercouris last week.

A measure of trust was essential between Washington and Moscow even during the Cold War’s most perilous passages. The Cuban Missile Crisis was resolved as it was because U.S. President John F. Kennedy and the Soviet premier, Nikita Khrushchev, were able sufficiently to trust one another. This trust no longer exists, as Putin and other Russian officials have made clear in responding to publication of the two German interviews.

Moscow and Beijing have said repeatedly since Joe Biden assumed office not quite two years ago that there is no trusting the Americans. The follow-on thought is that there is no point negotiating with them in a diplomatic context. For various Russian officials, from Putin on over and down, Merkel’s revelations seem grimly to have confirmed these conclusions.

It is a major turn that Moscow now includes the Europeans, and especially the Germans, in this assessment. Germany now tells the lies of which the American empire is made — a matter of anxiety and sadness all at once. If scorched-earth diplomacy is a fitting name for what the West has been up to in its dealings with Russia since 2014, as I think it is, the German bridge between West and East has been burnt.

The gravity of these conclusions, the implications as we face forward, are immense for the West and non–West alike. A world replete with hostilities is one we all know. A world devoid of trust and talking will prove another matter. As we now see in the Ukraine context, there is no possibility for diplomacy, negotiation or dialogue of any kind without trust. We read daily of the result in those few publications reporting this war honestly.

18 comments for “PATRICK LAWRENCE: Germany & the Lies of Empire”