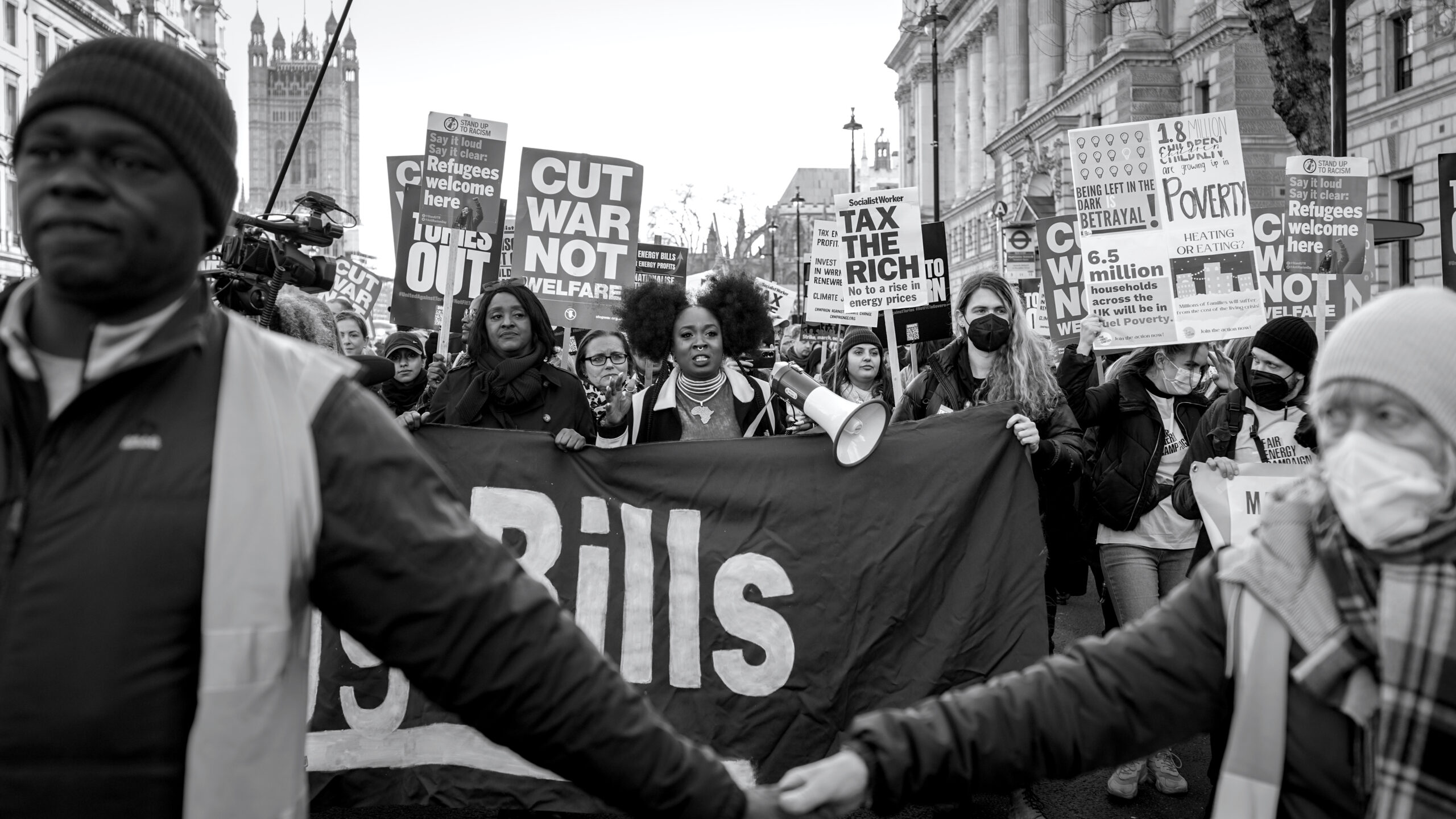 At a time when over 11 million people in the U.K. are expected to fall into fuel poverty and thousands are going hungry, the wealthiest member of the House of Commons has been appointed prime minister.

Forty-two-year-old Rishi Sunak assumed office on Oct. 25, a day after being chosen as the leader of the ruling Conservative Party. The former banker is the U.K.’s third prime minister this year, after his predecessor Liz Truss resigned after just 45 days in office.

Delivering his first address outside 10 Downing Street last week, Sunak said that the country was facing a “profound economic crisis” and while “some mistakes were made” during Truss’ tenure, he had been “elected” to fix them. “I will place economic stability and confidence at the heart of this government’s agenda. This will mean difficult decisions to come,” he said.

These were similar to the statements made by now re-appointed Chancellor Jeremy Hunt, who warned of “decisions of eye-watering difficulty.”

The burden of this “difficulty” and the need to “tighten belts” — which can only mean more cuts and austerity — will ultimately be borne by the poor and the working class, and the consequences can be deadly.

A study released by the Glasgow Centre for Population Health and the University of Glasgow earlier in October attributed a shocking 335,000 excess deaths to the austerity policies imposed by Tory governments between 2012 and 2019. 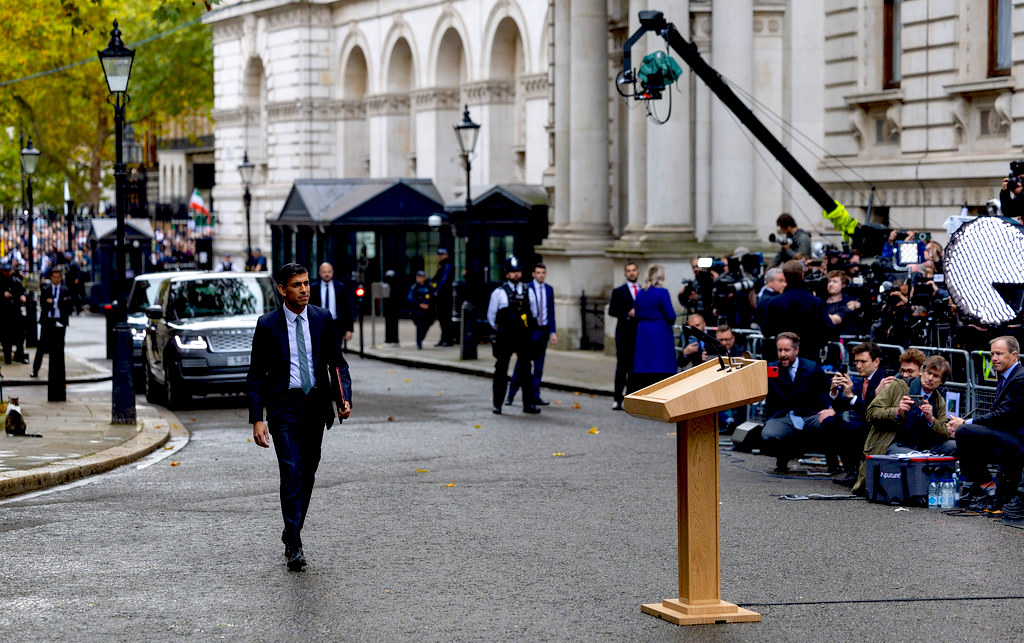 The personal wealth of Sunak and his wife Akshata Murty stands at $830 million. Meanwhile, wages in the U.K. have fallen at the fastest rate in over two decades and inflation driven by high food prices has reached a 40-year-high.

Sunak has not made any concrete statements about his economic plans — neither in his 84-second speech after securing the Tory leadership nor in his nearly six-minute address last week. However, the pro-austerity and pro-rich agenda of his government is evident in his appointments to the cabinet, particularly Hunt.

While pledging to build “a stronger NHS [National Health Service],” Sunak has put the man responsible for much of its collapse in charge of the country’s economy. During his stint as health secretary between 2012-2018 — the longest in NHS history — Hunt oversaw the slowest period of investment in the NHS, approximately 1 percent, when the Office of Budget Responsibility had recommended 4.3 percent.

The time spent by patients waiting to access accident and emergency (A&E) services grew significantly under his tenure, the number of hospital beds declined as bed occupancy rates hit record levels, treatments were restricted, and A&E and maternity units were closed.

Hunt pushed for privatization, extended the cap on pay increases for NHS workers, and imposed a contract on junior doctors following a series of historic strikes in 2016. 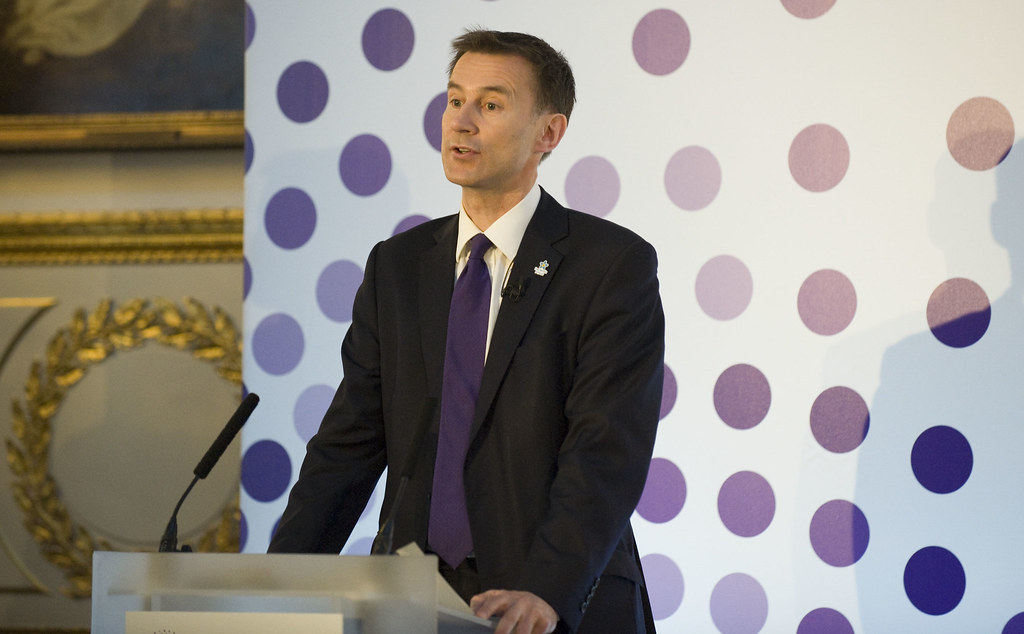 Several hospitals are in danger of physical collapse or have come under increasing strain due to the recent surge in Covid-19 cases.

Meanwhile, the government has delayed the presentation of its fiscal statement, which will include details of impending cuts, from Oct. 31 to Nov. 17. The pro-austerity push is not likely to face resistance from Sunak, who was the chancellor under the Boris Johnson government in 2021 when the U.K. saw the “biggest overnight cut” in social security benefits since the end of the Second World War.

Johnson’s government scrapped the £20 ($23) per week uplift in universal credit, despite various analyses showing that the cut would impact around 6 million people, and 500,000 more people, including 200,000 children, would additionally be pushed into poverty.

With inflation at a multi-decade high in the early months of 2022, it was predicted that families in the U.K. could witness the largest annual decline in their living standards since the 1950s. The crisis would disproportionately impact poor households.

Against this backdrop, then-Chancellor Sunak unveiled a “mini-Budget” in March. The budget statement introduced some tax cuts, including a 5p (5 cents) per liter reduction in fuel duty and a £3,000 ($3,470) increase in the threshold for national insurance contributions. The mini-budget was however widely condemned for failing to shield poorer families from the mounting cost of living crisis. 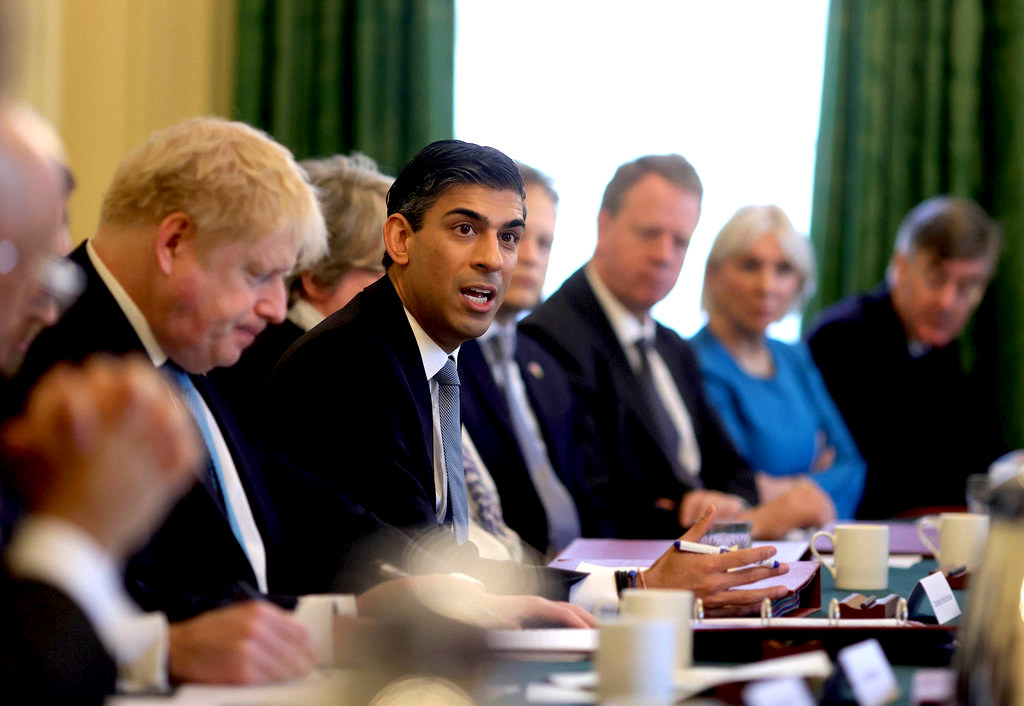 The think tank Resolution Foundation found that under the budget provisions, only 1-in-8 workers will actually witness a decline in their tax bills by 2024. Importantly, it warned that 1.3 million people, including 500,000 children, would fall below the poverty line by 2023. This would be the highest number of people falling into poverty outside of a recession. Additionally, the income of the poorest households would decline by 6 percent.

“The big picture is that Rishi Sunak has prioritized rebuilding his tax-cutting credentials over supporting the low-to-middle income households who will be hardest hit from the surging cost of living,” noted Resolution Foundation’s Chief Executive Torsten Bell.

Writing in The Morning Star, Labour MP Diane Abbott warned that the budget contained an “enormous tax giveaway to big business” alongside cuts on government spending, amounting to £27 billion ($31.3 billion).

In July, Sunak stepped down as chancellor amid a slate of resignations that ultimately forced Johnson out of office and cleared the way for him to contest the election for Tory leadership.

In August, anger grew after a video showing Sunak telling Conservative Party members in Tory-majority Tunbridge Wells in Kent that the government had “inherited a bunch of formulas from Labour that shoved all the funding into deprived urban areas that needed to be undone. I started the work of undoing that.”

A few months prior, analysis by The Guardian had found that affluent parts of England, including those areas represented by government ministers, had received up to 10 times more funding per capita compared to the poorest.

Back in May, Sunak, in his capacity as chancellor, had pledged that benefits would rise at pace with the rate of inflation. However, as prime minister, Sunak refused to confirm if he would act on the pledge when the question came up in the parliament on Oct. 26 — at a time when inflation has reached 10.1 percent.

The government has similarly not committed to a triple-lock on pensions, under which state pensions will increase by whichever is highest – inflation, average earning or 2.5 percent, something former Prime <inister Liz Truss had agreed to implement.

Meanwhile, in his Oct. 25 address,  Sunak pledged to deliver on the Conservative Party’s 2019 election manifesto, including the “control of our borders.”

On his first day as prime minister, he re-appointed Suella Braverman as home secretary, cementing the government’s hardline anti-immigration agenda. The move sparked major outrage, given that Braverman had been forced to resign just days before for a breach of the ministerial code. 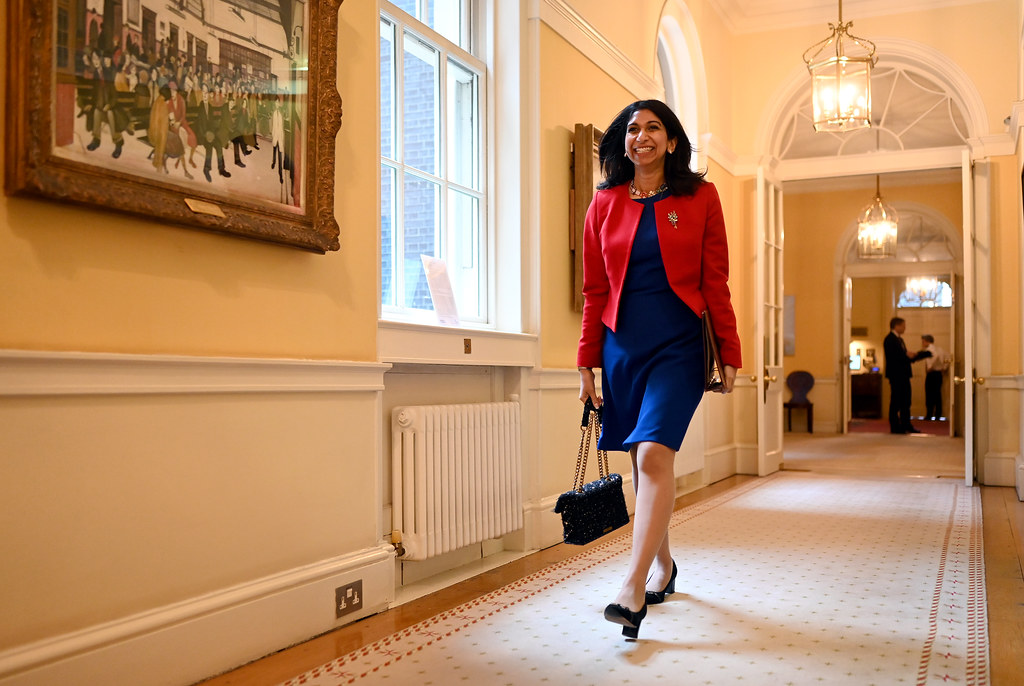 Sunak and Braverman have vehemently backed the government’s widely-condemned deportation agreement with Rwanda, which is currently under judicial review. Born to immigrant families of Indian origin, both leaders have reinforced racist and xenophobic ideas of the “acceptable” or “deserving” migrant — those who come to the U.K. through “legal and controlled” migration and “embrace British values,” or those who came to the U.K. “because the British Government had decided that it wanted them to come here.”

These are contrasted with those who “abuse the system” or “put pressure on housing, public services, and community relations,” and people who “lie” about being victims of modern slavery.

Sunak and Braverman have supported reducing the number of migrants arriving in the U.K. Among the most worrisome aspects of their immigration stance is their commitment to reforming the existing protections for asylum seekers, including provisions that fall under the European Convention on Human Rights.

Rights campaigners have also warned of the revival of the Bill of Rights with the reinstatement of Dominic Raab as justice secretary. The legislation, dubbed as the “Rights Removal Bill,” will scrap the Human Rights Act, allowing U.K. courts to disregard the rulings issued by the European Court of Human Rights and making it much harder for oppressed and marginalized groups to seek justice.

Sunak and Braverman also support the U.K.’s notorious “counterterrorism” strategy, PREVENT, with Sunak pledging to expand the definition of extremism to include those who “vilify Britain.”

He has said that Islamic extremism is the “single largest threat to the U.K.’s national security,” and vowed to audit publicly funded charities and organizations to “weed out” those who support extremism.

A landmark review of PREVENT released in February concluded that the strategy was not only ineffective, but also had a “discriminatory and disproportionate” impact on Muslim communities. Based on around 600 testimonies, the report warned that the strategy involved “serious potential breaches of Children’s Rights and Human Rights” and subjected children as young as those in nursery and primary school to “an extraordinary net of surveillance.”

Sunak and Braverman have come into office as the ruling Conservative Party systematically dismantles the right to dissent. One such attempt in this direction is the draconian Public Order Bill which is now headed to the House of Lords for a vote.

The legislation brings back previously rejected provisions of the Police, Crimes, Sentencing and Courts Act that came into force in June, dramatically expanding policing powers. The Public Order Bill contains a slate of measures attacking the right to protest, including offenses related to “serious disruptions,” “interfering with national infrastructure” and “locking on.”

In a year of historic labor uprisings across several sectors, the government has also taken aim at trade union rights, including the right to strike. Just as the Rail, Maritime, and Transport (RMT) union is gearing up for a wave of walkouts, the Transport Strikes (Minimum Service Levels) Bill has been published, restricting strikes in the transport sector. Sunak and Braverman will now oversee a vote on the bill.

In July, the U.K. adopted a law making it easier for businesses to hire temporary workers during strikes. Concerns have also grown over a mammoth post-Brexit legislation proposed by MP Jacob Rees-Mogg to do away with 2,400 laws which include key workers’ rights related to equal pay and pensions.

These massive changes will take place under a prime minister who does not have a mandate.

As the Tory government moves forward with its attacks on the working class and marginalized groups, progressive forces and trade unions in the U.K. have vowed to resist.

Tanupriya Singh is a correspondent for  Peoples Dispatch.