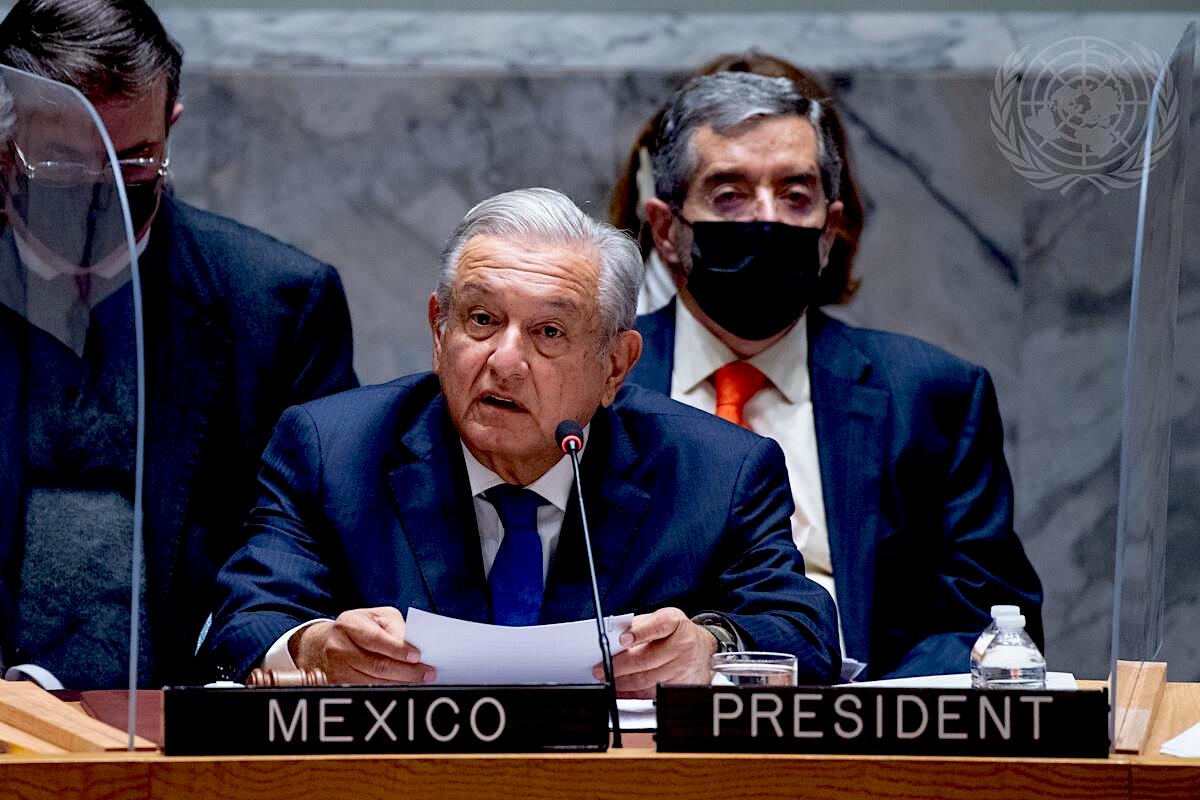 While Putin dismissed Biden’s worries as unfounded, the specter of nuclear Armageddon  drove U.S. anti-war activists last week to the streets in a September Week of Action organized by the Peace in Ukraine Coalition.

The Peace in Ukraine Coalition — CODEPINK, Veterans for Peace, Democratic Socialists of America, Massachusetts Peace Action, Women’s International League for Peace and Freedom-U.S. and other organizations — mobilized for negotiations, not escalation in what CODEPINK describes as a proxy war threatening a direct war between the two most heavily armed nuclear nations, the United States and Russia.

With Biden asking Congress for another $13.7 billion for Ukraine, $7.2 billion for weapons and military training, activists delivered letters to their House and U.S. Senate representatives, some letters simply urging a ceasefire, others pushing for a no vote on the next weapons request folded into a $47 billion Covid relief bill.

That bill, called a continuing resolution, must be voted on in one form or another by Sept. 30 to avoid a federal government shutdown.

If the resolution passes with Biden’s request, military analysts say it would bring this year’s total for Ukraine to $67 billion. The amount allotted for weapons, military training and intelligence could surpass $40 billion, four times the budget of the Environmental Protection Agency during an existential climate crisis of wildfires, droughts, storms and rising sea levels. 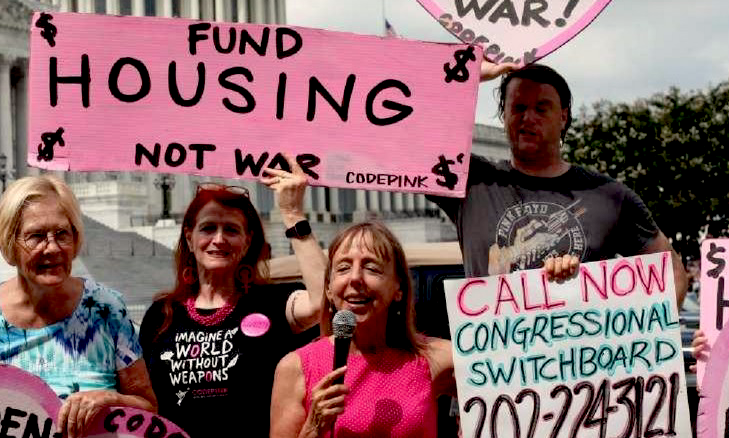 In the nation’s capital CODE-PINK co-founders Medea Benjamin and Jodie Evans, together with Colonel Ann Wright and other activists, kicked off the Week of Action, going door to door to the offices of the House Congressional Progressive Caucus. (Marcy Winograd)

In the nation’s capital CODEPINK co-founders Medea Benjamin and Jodie Evans, together with Col. Ann Wright and other activists, kicked off the Week of Action, going door-to-door to the offices of the House Congressional Progressive Caucus (CPC), where the most natural anti-war allies would, theoretically, be found.

While some members of the caucus call for much-needed diplomacy and raise concerns about the risk of nuclear war — either through a miscalculation or an intentional first strike — not one member of the nearly 100-member CPC will commit to voting against more weapons for Ukraine.

“Further escalation should be unthinkable, but so should a long war of endless crushing artillery barrages and brutal urban and trench warfare that slowly and agonizingly destroys Ukraine, killing hundreds of Ukrainians with each day that passes. The only realistic alternative to this endless slaughter is a return to peace talks to bring the fighting to an end.”

House Speaker Nancy Pelosi and Senate Majority Leader Chuck Schumer do not make it easy for Democrats to break ranks — as the Republicans are doing ahead of the midterms — on the question of weapons for Ukraine. 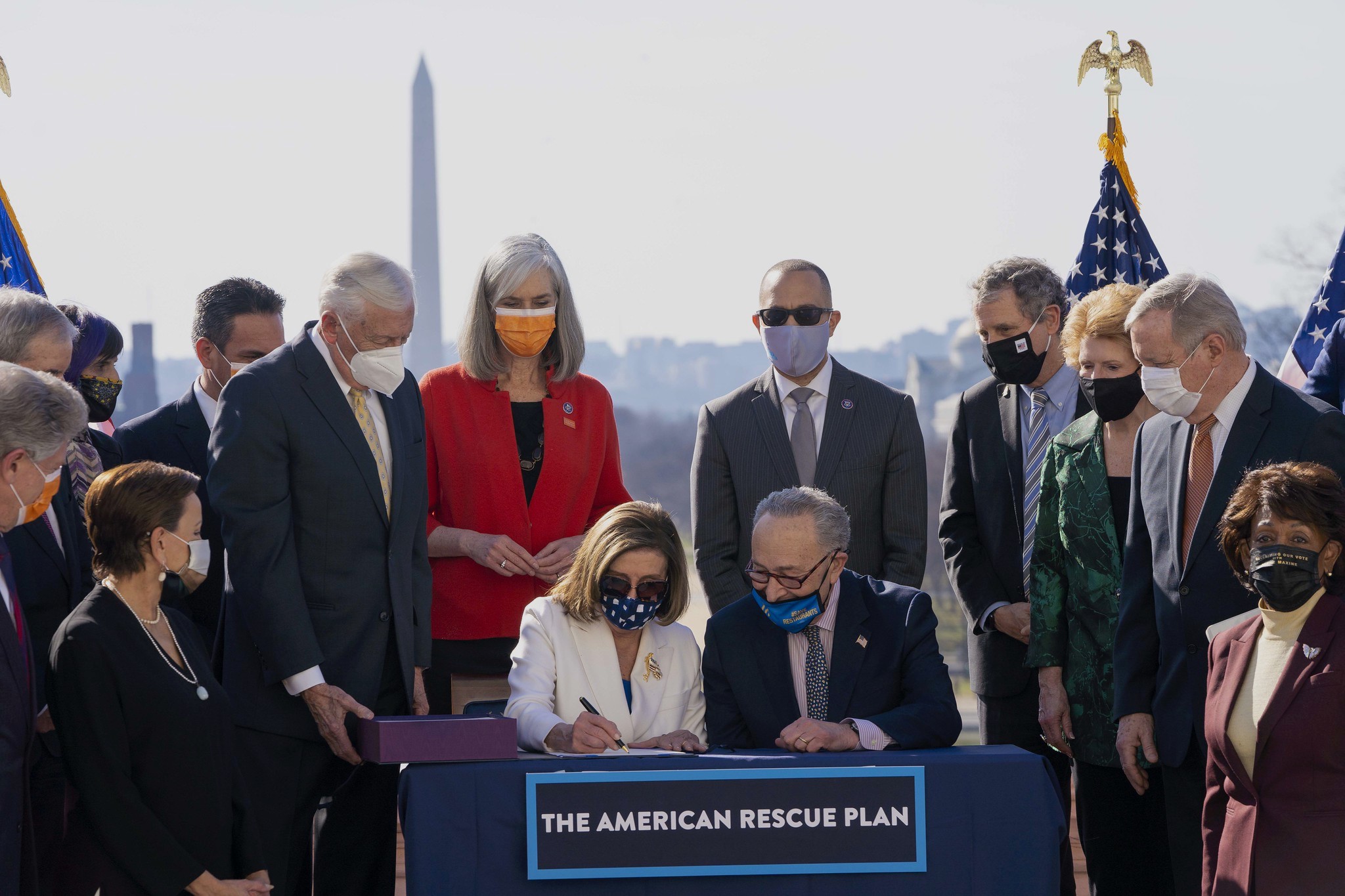 Since the Russian invasion on Feb. 24, thousands of Ukrainian soldiers and civilians have died, and according to the United Nations, 12 million have been displaced, either internally or throughout eastern Europe. The Pentagon estimates 80,000 Russian soldiers have been killed.

Partners in the Peace in Ukraine Coalition condemn the Russian invasion but argue there is no military solution to a war that was provoked by the same neo-conservatives responsible for the disastrous U.S. invasions and occupations of Iraq and Afghanistan.

Through successive administrations, the voices for a unipolar world in which the U.S. dominates led to expansion of NATO, a hostile nuclear-armed military alliance, from 12 countries after the fall of the Soviet Union to 30 countries, including some that border Russia:  Latvia, Estonia, Poland and LIthuania.

?? Thousands of people taking part in protests in Paris today demanding the country's withdrawal from NATO and the EU and Macron's resignation. ? pic.twitter.com/oeYaWVUxP7

In addition to the expansion of NATO, organizations in the Peace in Ukraine Coalition cite other provocations: U.S. support for a 2014 coup of Ukraine’s democratically elected Russia-friendly president and years of U.S. arms shipments — from Presidents Barack Obama to Donald Trump to Biden — to undermine the 2015 MINSK II peace agreement. That accord signed by Russia and Ukraine was to end the civil war that followed the 2014 coup and left an estimated 14,000 people dead in Ukraine’s industrial Donbass region.

Fighting between the swastika-flag-waving Azov Battalion and Russian separatists preceded Russia’s February invasion of Ukraine, though corporate media often fails to mention this.

On Sept. 15, demonstrators in San Francisco’s Financial District marched from the Senate offices of Alex Padilla and Dianne Feinstein to deliver letters in opposition to funding a protracted war in Ukraine.

9/15. San Fran, CA. #CODEPINK & other anti-war activists at offices of Senators Feinstein & Padilla to support a ceasefire in #Ukraine & $$$ for #climate, not endless war. Check out our Week of Actions across the US https://t.co/5LrM70BiY5 Photo: Leon Kunstenaar, Indybay. pic.twitter.com/hRsHIIofMS

Milwaukee anti-war activists, including a county supervisor, took their peace flags and “Diplomacy, Not War” signs to the campus of conservative Marquette University, where they passed out hundreds of flyers with QR codes for students to email their Congress members for a ceasefire.

Organizer Jim Carpenter, co-chair (with this author) of the foreign policy team of Progressive Democrats of America, told skeptics who want a fight to the last Ukrainian, “Are you more concerned about saving lives or saving territory?”

DSA members in Santa Barbara, California, distributed a similar half-pager to a staffer for Democratic Congressman Salud Carbajal, who serves on the House Armed Services Committee and represents a district crawling with military contractors and home to Vandenberg Air Force Base, where a test launch of a nuclear missile was delayed due to Putin’s placement of Russia’s nuclear arsenal on high alert. 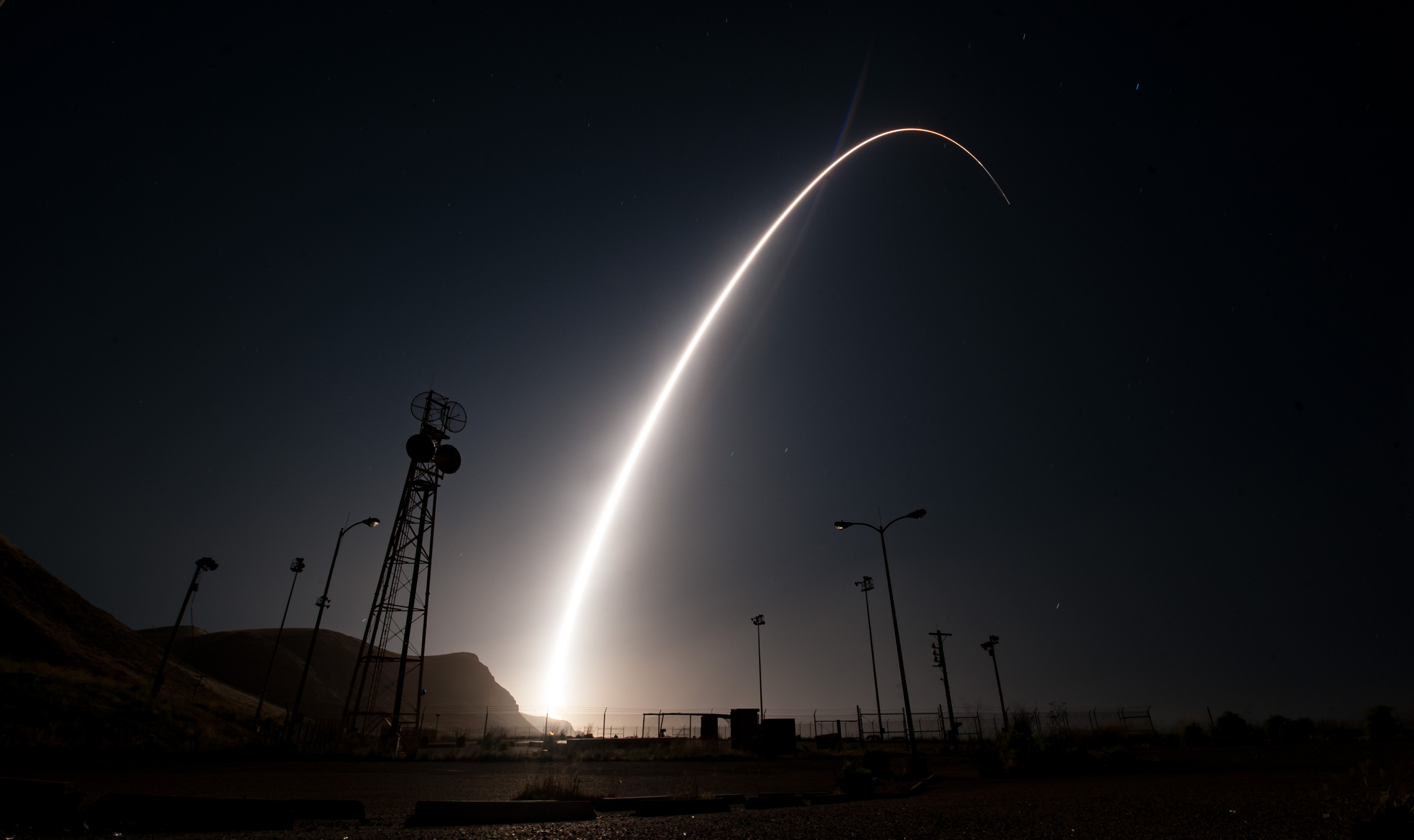 On the steps outside the congressman’s office, activists talked to a Ukrainian church member visiting the lawmaker at the same time to press for more weapons to Ukraine. “You can’t negotiate with Putin–you can never trust him,” he insisted, waving a life-size Ukrainian flag and arguing for a fight to the finish–to regime change.

“But there is no military solution short of economic ruin, global famine, climate catastrophe — or worse, nuclear Armageddon,” responded this activist, who pointed out — to nods from the Ukrainian — that since the start of the war Ukraine and Russia had negotiated grain exports and nuclear reactor inspections.

Why couldn’t they negotiate an end to the war, if only the U.S. and NATO would stop sending weapons to prolong the crisis?

Veterans for Peace members in the Bay Area wrote to Democratic reps Mark Desaulinier (CA-11) and Barbara Lee (CA-13), the lone vote against the U.S. invasion of Afghanistan and sponsor of legislation to cut the Pentagon budget by $350 billion.

“We urge you to forcefully call for negotiations and speak out against Secretary of Defense Austin’s call for continuing the war to ‘weaken Russia.’ That is a recipe for a world war if ever there was one,” read the letters.

In Rockville, Maryland, another Veterans for Peace member Jim Driscoll, who volunteered for the Marines in Vietnam, published an OpEd in the local press, “Why I was arrested to ‘Stop the War. Save the Climate.'” Driscoll was arrested in August during an anti-war protest outside Maryland Democratic Senator Chris Van Hollen’s office. His message to Van Hollen, as well as the media?: Stop fueling the war in Ukraine that exacerbates the climate crisis.

“As with Vietnam and Iraq, the U.S. government and a subservient media have painted an ahistorical, one-sided, distorted narrative to justify the damage we have foisted upon the people of Ukraine …”

The White House — concerned that Ukrainian battlefield victories will trigger Russian retaliation — opposes Zelensky’s latest request: missiles with a range of 190 miles that Zelensky could use to strike Russian-annexed Crimea.

As a plan B, Zelensky’s government has launched an “Advantage Ukraine” initiative of low taxation and deregulation to attract foreign investors to build made-to-order weapons systems in Ukraine. That country, however, may have serious competition as a forward-deployed threat to Russia, for German Chancellor Olaf Scholz recently announced he wants to make his country “the cornerstone of conventional defense of Europe.”

Gracias @lopezobrador_ for calling on the UN to create an international committee to mediate an end to the war in #Ukraine. A toast to you and your leadership on the world stage. #AMLO #NoWar https://t.co/n77Elxz4EE

Not everyone in high places campaigns, however, for escalation and further militarization. Mexican President Manuel Lopez Obrador (AMLO) will call on the United Nations during the General Assembly’s general debate this week to  create an international committee to promote dialogue between Biden, Putin and Zelensky with invitations to Pope Francis, the prime minister of India and the U.N. secretary general to act as mediators to end the war in Ukraine. AMLO would like to put everything on the negotiating table, including nuclear missile tests.

Excited by AMLO’s initiative, members of the Peace in Ukraine Coalition hope to amplify his message in the coming weeks as an existential question haunts coalition members.

How does the war in Ukraine end? With nuclear annihilation of 60 percent of the human race or a decades-long war of attrition or a backdoor deal for semi-autonomy of the Donbass and partial denuclearization of Europe?

As the United States approaches the 60th anniversary of the October 1962 Cuban Missile Crisis, one is reminded that former President John F. Kennedy persuaded Soviet Leader Nikita Krushchev to remove nuclear missiles pointed at Florida from a base in Cuba, not by fast-tracking weapons to escalate a hot war but by quietly making a deal to remove U.S. Jupiter missiles from Turkey.

As time passed, U.S. nuclear warheads were reinstalled in Turkey, though the quiet negotiations between JFK and Kruschev serve as an example of how diplomacy can avert catastrophe.

Marcy Winograd of Progressive Democrats of America served as a 2020 DNC delegate for Bernie Sanders and co-founded the Progressive Caucus of the California Democratic Party. Coordinator of CODEPINKCONGRESS, Marcy spearheads Capitol Hill calling parties to mobilize co-sponsors and votes for peace and foreign policy legislation. She can be reached at Marcy@CodePink.org.

16 comments for “A Push for Peace in Ukraine”