Russian President Vladimir Putin delivered a major address on the war in Ukraine, which changes its nature dramatically. As a service, CN provides here the English text of the speech. 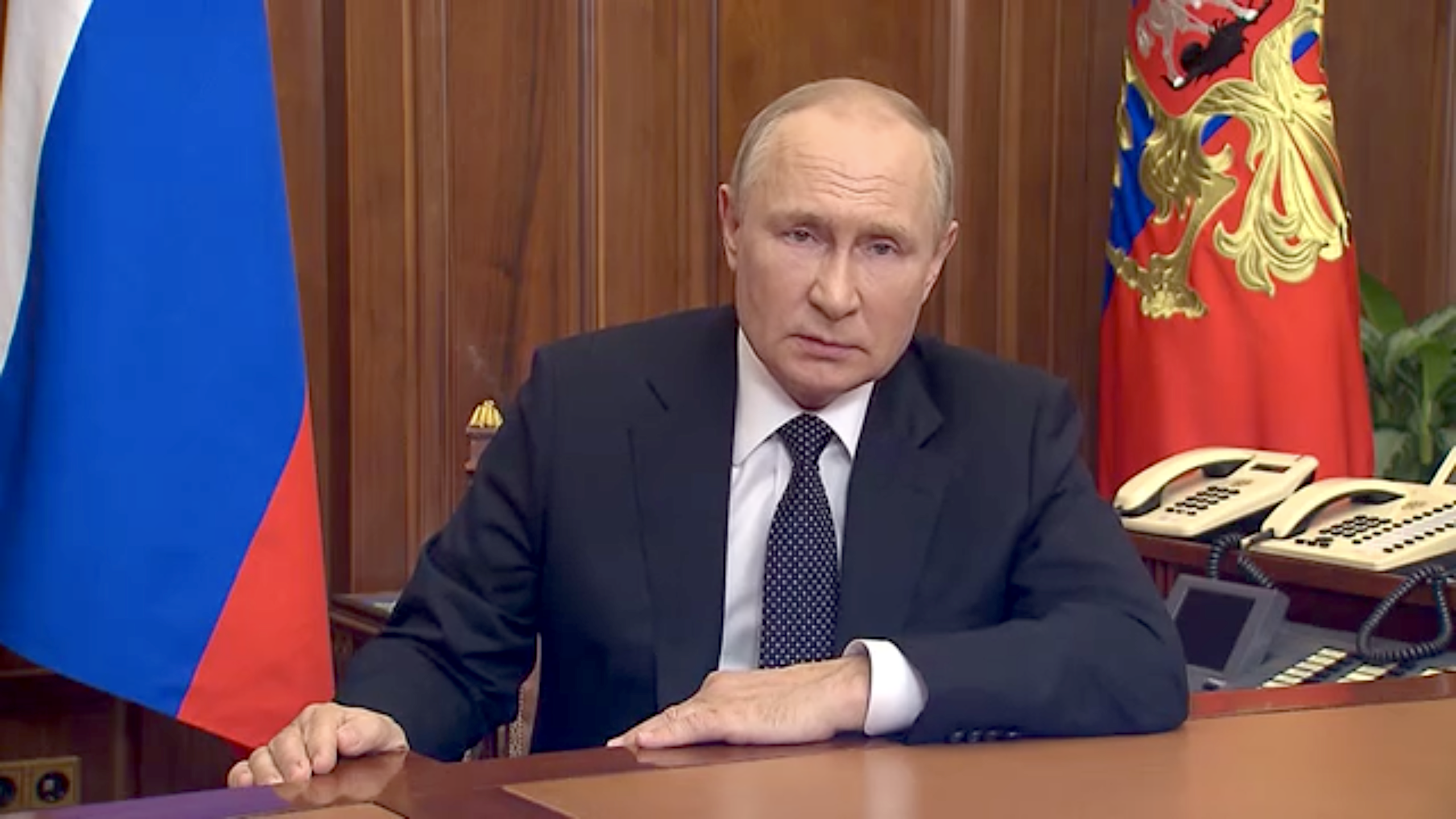 The topic of my speech is the situation in the Donbass and the course of a special military operation to liberate it from the neo-Nazi regime that seized power in Ukraine in 2014 as a result of an armed coup.

Today I appeal to you, to all citizens of our country, to people of different generations, ages and nationalities, to the people of our great Motherland, to all who are united by great historical Russia, to the soldiers and officers, volunteers who are now fighting on the front lines, are on the combat post, to our brothers and sisters – residents of the Donetsk and Lugansk People’s Republics, Kherson and Zaporozhye regions, and other areas liberated from the neo-Nazi regime.

It will be about the necessary, urgent steps to protect the sovereignty, security and territorial integrity of Russia, about supporting the desire and will of our compatriots to determine their own future and about the aggressive policy of part of the Western elites, who are striving with all their might to maintain their dominance, and for this they are trying to block, to suppress any sovereign independent centers of development in order to continue to crudely impose their will on other countries and peoples, to plant their pseudo-values.

The purpose of this West is to weaken, divide and ultimately destroy our country. They are already directly saying that in 1991 they were able to split the Soviet Union, and now the time has come for Russia itself, that it should disintegrate into many mortally hostile regions and regions.

And they have been planning such plans for a long time. They encouraged gangs of international terrorists in the Caucasus, promoted the offensive infrastructure of NATO close to our borders. They made total Russophobia their weapon, including for decades they purposefully cultivated hatred for Russia, primarily in Ukraine, for which they were preparing the fate of an anti-Russian foothold, and the Ukrainian people themselves were turned into cannon fodder and pushed to war with our country, unleashing it, this war , back in 2014, using the armed forces against the civilian population, organizing genocide, blockade, terror against people who refused to recognize the power that arose in Ukraine as a result of a coup.

And after the current Kyiv regime actually publicly refused a peaceful solution to the problem of Donbass and, moreover, announced its claims to nuclear weapons, it became absolutely clear that a new, yet another, as it had happened twice before, large-scale attack on the Donbass was inevitable. And then, just as inevitably, an attack on the Russian Crimea would follow – on Russia.

In this regard, the decision on a pre-emptive military operation was absolutely necessary and the only possible one. Its main goals – the liberation of the entire territory of Donbass – have been and remain unchanged.

The Luhansk People’s Republic has already been almost completely cleared of neo-Nazis. Fighting in the Donetsk People’s Republic continues. Here, for eight years, the Kyiv occupation regime created a deeply echeloned line of long-term fortifications. Their head-on assault would have resulted in heavy losses, so our units, as well as the military units of the Donbass republics, act systematically, competently, use equipment, protect personnel and step by step liberate Donetsk land, clear cities and towns from neo-Nazis, provide assistance to people whom the Kyiv regime turned into hostages, into human shields.

As you know, professional servicemen serving under contract take part in the special military operation. Volunteer formations are also fighting shoulder to shoulder with them: people of different nationalities, professions, ages are real patriots. At the call of their hearts, they rose to the defense of Russia and Donbass.

In this regard, I have already given instructions to the Government and the Ministry of Defense in full and in the shortest possible time to determine the legal status of volunteers, as well as fighters of the units of the Donetsk and Lugansk People’s Republics. It should be the same as that of regular servicemen of the Russian army, including material, medical support, and social guarantees. Particular attention should be paid to organizing the supply of volunteer formations and detachments of the people’s militia of Donbass with equipment.

In the course of solving the main tasks of protecting the Donbass, our troops, based on the plans and decisions of the Ministry of Defense and the General Staff on the general strategy of action, liberated from neo-Nazis also significant territories of the Kherson and Zaporozhye regions, as well as a number of other regions. As a result, an extended line of contact was formed, which is over a thousand kilometers.

Already after the start of the special military operation, including the talks in Istanbul, the representatives of Kyiv reacted very positively to our proposals, and these proposals primarily concerned ensuring Russia’s security and our interests. But it is obvious that the peaceful solution did not suit the West, therefore, after certain compromises were reached, Kyiv was actually given a direct order to disrupt all agreements.

Ukraine began to be pumped up with weapons even more. The Kyiv regime has launched new gangs of foreign mercenaries and nationalists, military units trained to NATO standards and under the de facto command of Western advisers.

At the same time, the regime of repressions throughout Ukraine against its own citizens, established immediately after the armed coup of 2014, was strengthened in the most severe way. The policy of intimidation, terror and violence is assuming more and more massive, terrible, barbaric forms.

I want to emphasize that we know that the majority of people living in the territories liberated from neo-Nazis, and these are, first of all, the historical lands of Novorossia, do not want to be under the yoke of the neo-Nazi regime. In Zaporozhye, in the Kherson region, in Lugansk and Donetsk, they have seen and are seeing the atrocities that neo-Nazis are doing in the occupied areas of the Kharkov region. The heirs of Bandera and Nazi punishers kill people, torture, throw them in prison, settle scores, crack down on, torment civilians.

More than seven and a half million people lived in the Donetsk and Lugansk People’s Republics, Zaporozhye and Kherson regions before the outbreak of hostilities. Many of them were forced to become refugees, to leave their homes. And those who remained – about five million people – today are subjected to constant artillery and rocket fire from neo-Nazi militants. They hit hospitals and schools, arrange terrorist attacks against civilians.

We cannot, we have no moral right to hand over people close to us to be torn to pieces by executioners, we cannot but respond to their sincere desire to determine their own fate. The parliaments of the people’s republics of Donbass, as well as the military-civilian administrations of the Kherson and Zaporozhye regions, decided to hold referendums on the future of these territories and turned to us, Russia, with a request to support such a step.

Let me emphasize that we will do everything to ensure safe conditions for holding referendums, so that people can express their will. And we will support the decision about their future, which will be made by the majority of residents of the Donetsk and Luhansk People’s Republics, Zaporozhye and Kherson regions.

Today, our Armed Forces, as I have already said, are operating on the line of contact, which exceeds a thousand kilometers, they are confronting not only neo-Nazi formations, but in fact the entire military machine of the collective West.

In this situation, I consider it necessary to make the following decision – it is fully adequate to the threats we face – namely: to protect our Motherland, its sovereignty and territorial integrity, to ensure the security of our people and people in the liberated territories, I consider it necessary to support the proposal Ministry of Defense and the General Staff on the conduct of partial mobilization in the Russian Federation.

I repeat, we are talking specifically about partial mobilization, that is, only citizens who are currently in the reserve will be subject to conscription, and above all those who served in the Armed Forces, have certain military specialties and relevant experience .

Those called up for military service before being sent to units will undergo additional military training without fail, taking into account the experience of a special military operation.

The decree on partial mobilization has been signed.

In accordance with the law, the chambers of the Federal Assembly – the Federation Council and the State Duma – will be officially informed about this today by letters.

Mobilization activities will begin today, from 21 September. I instruct the heads of regions to provide all necessary assistance to the work of military commissariats.

I would like to emphasize that Russian citizens called up for military service by mobilization will receive the status, payments and all social guarantees of military personnel serving under a contract.

I will add that the Decree on partial mobilization also provides for additional measures to fulfill the state defense order. The heads of defense industry enterprises are directly responsible for solving the tasks of increasing the production of weapons and military equipment, and deploying additional production capacities. In turn, all issues of material, resource and financial support for defense enterprises must be resolved by the Government immediately.

In its aggressive anti-Russian policy, the West has crossed every line. We constantly hear threats against our country, our people. Some irresponsible politicians in the West not only talk about plans to organize the supply of long-range offensive weapons to Ukraine – systems that will allow strikes against the Crimea and other regions of Russia.

Such terrorist strikes, including with the use of Western weapons, are already being carried out on the border settlements of the Belgorod and Kursk regions. In real time, using modern systems, aircraft, ships, satellites, strategic drones, NATO carries out reconnaissance throughout southern Russia.

In Washington, London, Brussels they are directly pushing Kyiv to transfer military operations to our territory. No longer hiding, they say that Russia should be defeated by all means on the battlefield, followed by the deprivation of political, economic, cultural, in general, any sovereignty, with the complete plunder of our country.

Nuclear blackmail was also launched. We are talking not only about the shelling of the Zaporizhzhya nuclear power plant, which is encouraged by the West, which threatens a nuclear catastrophe, but also about the statements of some high-ranking representatives of the leading NATO states about the possibility and admissibility of using weapons of mass destruction against Russia – nuclear weapons.

To those who allow themselves to make such statements about Russia, I would like to remind you that our country also has various means of destruction, and for some components more modern than those of the NATO countries. And if the territorial integrity of our country is threatened, we will certainly use all the means at our disposal to protect Russia and our people. It’s not a bluff.

The citizens of Russia can be sure that the territorial integrity of our Motherland, our independence and freedom will be ensured, I emphasize this again, with all the means at our disposal. And those who are trying to blackmail us with nuclear weapons should know that the wind can also turn in their direction.

It is in our historical tradition, in the destiny of our people, to stop those who strive for world domination, who threaten with the dismemberment and enslavement of our Motherland, our Fatherland. We will do it now, and so it will be.

I believe in your support.

← A Push for Peace in Ukraine
PATRICK LAWRENCE: Appointment in Samarkand →

12 comments for “Text of Putin’s Speech on Ukraine”