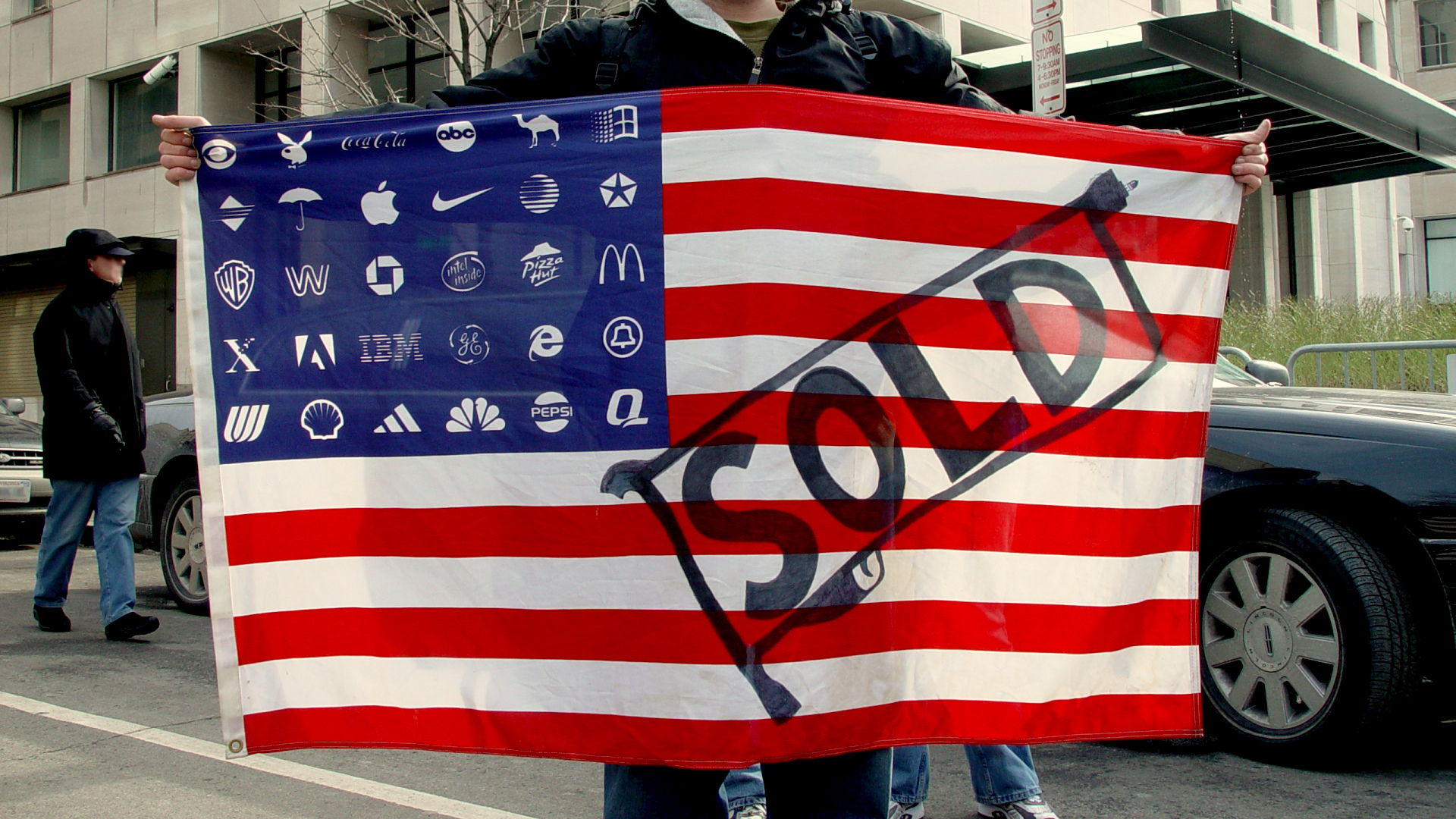 Back in the day, a Yale law professor named Charles Reich wrote a bestselling book called The Greening of America. His masterwork topped The New York Times best seller list and drew a ton of popular attention. Reich argued that American society was undergoing a major shift in cultural awareness (He used “consciousness,” a word that no longer seems to be in vogue) and opined that this would lead to a major and lasting revitalization of our deepest cultural norms and values. It was a noble thought.

It is possible that just about every major social and political mega-problem we’re now facing can in some way be traced to varying degrees of corporatization — from renewed interest in war as a solution to international relations to Big Pharma’s capture of health care to the influence of dark money in our political system to a climate crisis fed and ignored by Big Energy.

One reason the book drew so much interest is because of Reich’s background. He was a former editor-in-chief of the Yale Law Journal and a friend of Supreme Court Justice William O. Douglas. In writing about something as retrospectively “mushy” as the consciousness movement of the sixties, Reich’s unique stance might then have been described as “establishmentarian as hippie” but also more contemporary than “old school.” His impressive background provided both gravitas and a strong air of credibility to the prevailing Zeitgeist. (Fun fact: among Reich’s students, William and Hillary Clinton.) 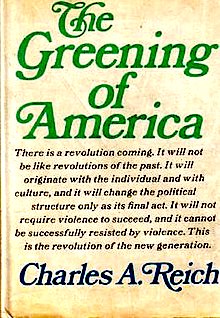 The sixties, of course, disappeared into the black hole of cultural amnesia that was the Reagan era. But as Reich continued his own personal and intellectual journey, he was having none of the social trend whereby many Boomer culture warriors eventually became yuppies, merrily plunging themselves into the consumer society they once railed against. Instead, and to his credit, Reich continued to develop his ideas and aspirations in the direction of the massive changes needed to right the ship of state. And many younger folks of his vintage learned and matured from the protests and educational rebellions of the sixties.

In 1995, Reich followed up with a second book that was titled Opposing the System that offered a prophetic warning about what would happen if corporations became powerful enough to “run the show.” Unlike his previous masterwork, the book was, for the most part, roundly ignored by the mainstream media. It was simply too radioactive. By chance, I happened to pick it up at a used bookstore and remember marveling at how it was shunted off to the remainder shelves after the smashing success of “The Greening of America.” So thoroughly was this book buried in the collective memory that when the LA Times wrote his obituary (Reich died in 2019), it wasn’t even mentioned.

Does ‘The System’ Still Exist?

Whatever anyone might want to say about the excesses or over-reach of the Sixties, with the influential younger demographic of the time, there was a widespread perception and understanding that the U.S. government was increasingly being influenced by corporations.

But that was a bit too simplistic. The semi-invisible power structure that guided many policy decisions had far-reaching tentacles and was basically an interlocking directorate of corporations working in tandem with a variety of educational and governmental institutions. It was this system of values that constituted “the establishment.”

The fact that, in the current political perception, many Americans no longer perceive this phenomenon (which has now mushroomed many times over in power and influence) or think of it as an obstacle to positive social change, is unfortunate. Back in the Sixties, the process of understanding the embedded role of corporate power in politics gave rise to the maxim: “If you’re not part of the solution, you’re part of the problem.”

Reich’s quixotic warning about the anti-democratic effects of excessive corporate control on the quality of our political life, of course, went largely unheeded. Since that time, corporate power has increased many times over and it has been ably argued that corporations now have effective control over Western governments in many important legislative and policy areas. What’s troubling to contemplate is how easily we’ve come to accept this reality as the new normal.

Not only is there more corporate control in more areas of life but (worse) there has been consolidation of corporate power into monopolies that are so powerful that they seem unstoppable. In addition to Big Tech, Big Pharma, Big Media, Big Ag, we now have the new kid on the block: Big Medicine. And sadly, the privatization (now coded as “public/private partnerships”) that was initially pushed by Republicans and Libertarians has now been embraced by mainstream Democrats and has been the case for many years. 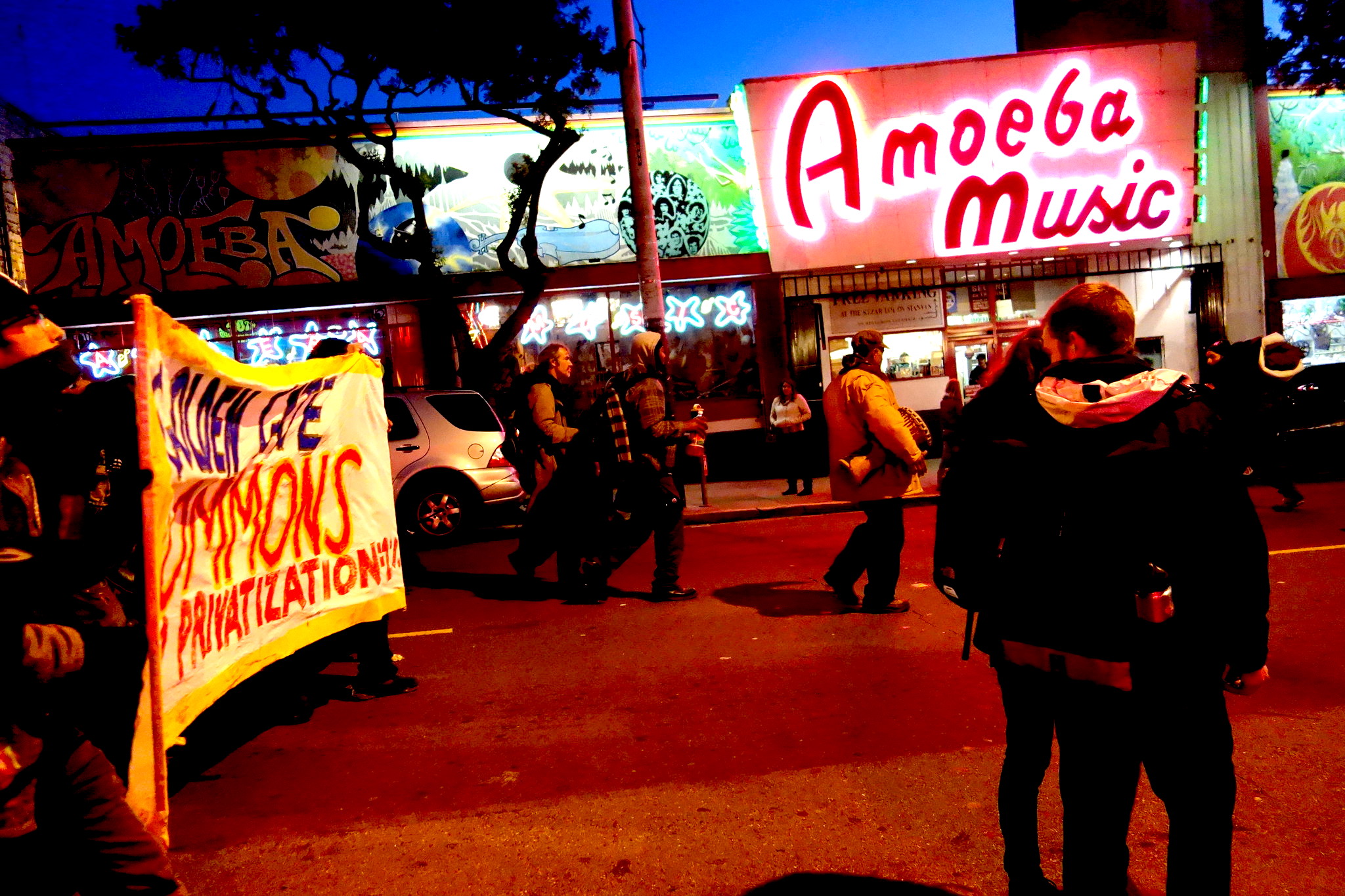 January 2013: Marching in San Francisco to bring awareness about the privatization of our common green space. (Steve Rhodes, Flickr,CC BY-NC-ND 2.0)

If we are to ever untangle what’s happening in U.S, politics, we should consider taking Charles Reich’s advice and revisiting the notion of “the system,” a juggernaut of unquestioned values and influences feeding on itself, continually reinforced by the mainstream corporate media, and having a multitude of negative impacts on the quality of life. Equally important is moving beyond the illusion that our political parties operate the same way they did 30 or 40 years ago. It’s precisely this illusion that keeps ordinary citizens from exercising the full spectrum of their rights and power while serving as the conceptual underpinning for massive wealth re-distribution to economic elites.

It is possible that just about every major social and political mega-problem we’re now facing can in some way be traced to varying degrees of corporatization — from renewed interest in war as a solution to international relations to Big Pharma’s capture of health care to the influence of dark money in our political system to a climate crisis fed and ignored by Big Energy. In my opinion, this is a worthy topic to explore. Rest assured, however, that to counter this notion, corporate interests are vigorously employing massive and costly PR and propaganda campaigns to muddy the water.

As mentioned, as corporations engage in more intrusive involvement in social and political problems (not just in the U.S. but globally), they’re also busy re-positioning themselves as agents for social change, under the moniker of “stakeholder capitalism.” This is often effected under another slightly Orwellian euphemism “public/private partnerships” (read: government in the service of business). Many areas formerly under the purview of government are now open season for powerful corporations including the climate crisis and the exploration of space. (My metaphor for this is opening up a fast-food franchise on the Titanic.)

The purported desirability of these new initiatives was made abundantly clear in several articles appearing in an April 2022 issue of Time magazine. One of them, addressing the climate crisis, advised: “Planet Earth’s Future Now Rests in the Hands of Big Business.” In the article we learn that:

“The U.S. Department of Energy has partnered with private companies to bolster the clean energy supply chain, expand electric-vehicle charging, and commercialize new green technologies, among a range of other initiatives. In total, the agency is gearing up to spend tens of billions of dollars on public-private partnerships to speed up the energy transition ….. Across the Biden Administration, and around the world, government officials have increasingly focused their attention on the private sector—treating companies not just as entities to regulate but also as core partners….For some, the emergence of the private sector as a key collaborator in efforts to tackle climate change is an indication of the power of capitalism to tackle societal challenges; for others it’s a sign of capitalism’s corruption of public institutions.”

In other words, it’s not enough that many corporations have despoiled the earth through systematic abuse of the profit motive and the widespread capture of regulatory agencies (Just one example: the FDA now receives major portions of its funding from Big Pharma). Instead of acknowledging culpability for their role in these problems, corporate entities are busy thinking about how they can make more money on the climate crisis and the other mega-problems facing humanity. Nice.

Next up: Corporatization of Space 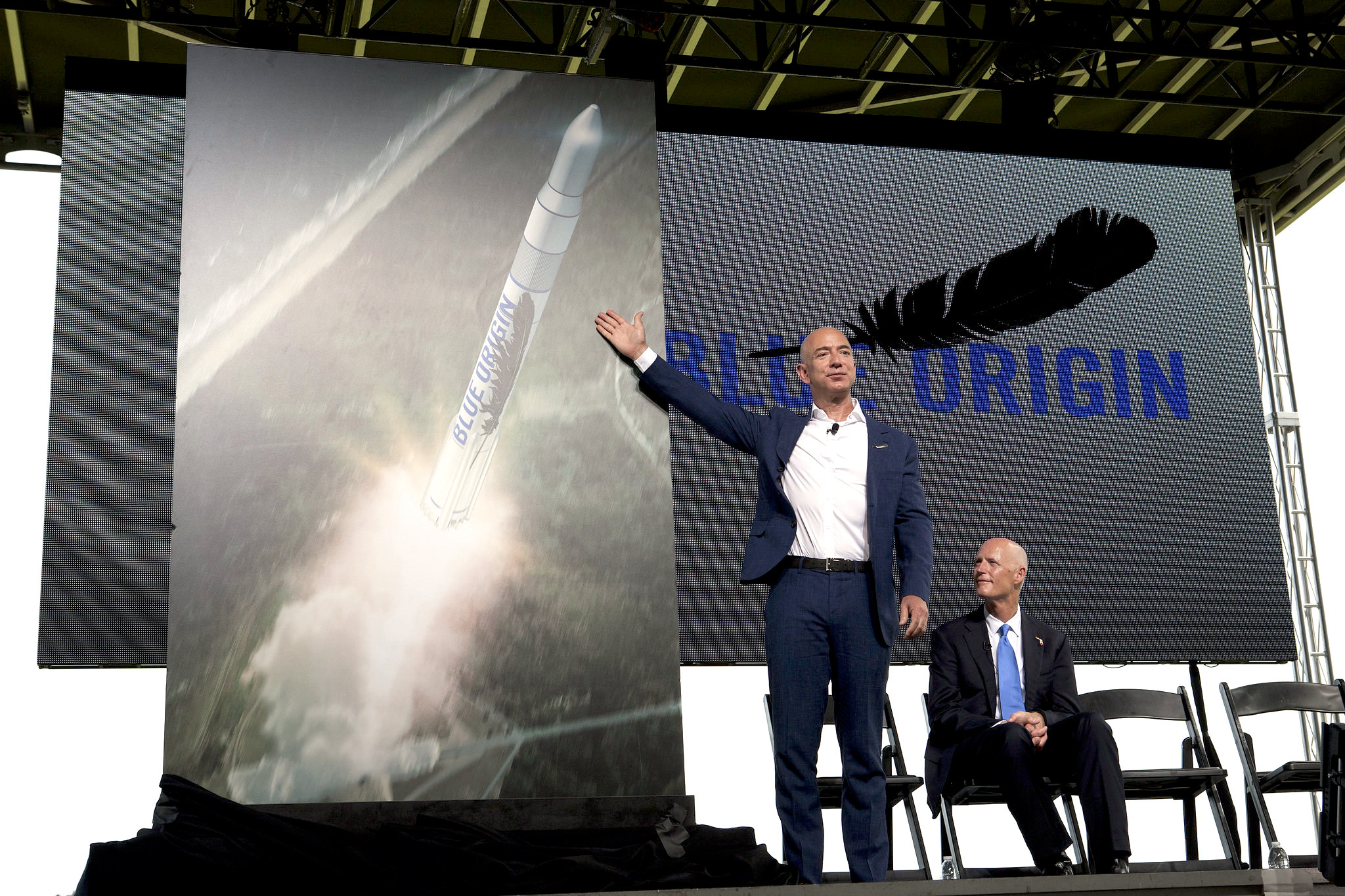 Once again, let’s draw on the self-declared wisdom of Time magazine for guidance. (This is a publication that’s now in the Big Tech/Big Media” camp as it’s now owned by the CEO of Salesforce.com). In the same issue, another article gushed over the fact that corporations are poised to dominate the exploration and use of space:

“….NASA made it clear that when that clock does toll, the U.S. will be getting out of the space station game, likely for good. Instead, the space agency signed a $415.6 million seed money deal with three companies — Blue Origin, Nanoracks, and Northrop Grumman — to develop their own private space stations, on which NASA and other customers could lease space for professional crews and tourists. The article goes on to point out that, in a press statement, a NASA spokesperson boasted that….” NASA is once again leading the way to commercialize space activities” and that “we are partnering with U.S. companies to develop the space destinations where people can visit, live, and work.”

It seems abundantly clear that the top-down corporate model of governance is fundamentally anti-democratic by its very nature and the waning power and direction of our democratic institutions worldwide has much to do with this fact.

There are many other examples of the corporate capture of public functions could be mentioned. It’s arguable, of course, that some of these efforts have effected positive change under the right circumstances. But uncontrolled and uncontrollable market forces are no substitute for thoughtful and enlightened public policy and democratic norms. Granted, this is in short supply these days but allowing corporations to fill that void is hardly a solution.

As our glorious planet continues to experience crisis after crisis, it’s sad and troubling that there seems to be no shortage of profiteers looking to make an easy buck off the spoils. It seems abundantly clear that the top-down corporate model of governance is fundamentally anti-democratic by its very nature and the waning power and direction of our democratic institutions worldwide has much to do with this fact.

Given these realities, the first task at hand is to foster a widespread recognition that the stakeholder capitalism being pushed by the Davos crowd with its call to accept the public/private partnership model is little more than a clever PR inversion. As such, much of it can be placed in the same bucket as greenwashing and other forms of corporate virtue signaling. Only with the deeper conceptual change that Charles Reich tried in vain to inspire will it be possible to make a sustained commitment to cleaning up the corporate takeover of our political system, eliminating pay-for-play politics, and restoring the kind of democratic governance that Americans deeply long for.

Tom Valovic is a journalist and the author of Digital Mythologies (Rutgers University Press), a series of essays that explored emerging social and political issues raised by the advent of the Internet. He has served as a consultant to the former Congressional Office of Technology Assessment. Tom has written about the effects of technology on society for a variety of publications including Columbia University’s Media Studies Journal, the Boston Globe, and the San Francisco Examiner, among others.

11 comments for “The Corporatization of Just About Everything”