Morawiecki’s eagerness to be in the vanguard of the West’s proxy war with Russia in Ukraine does not, so to say, run in the family, writes Michal Krupa. 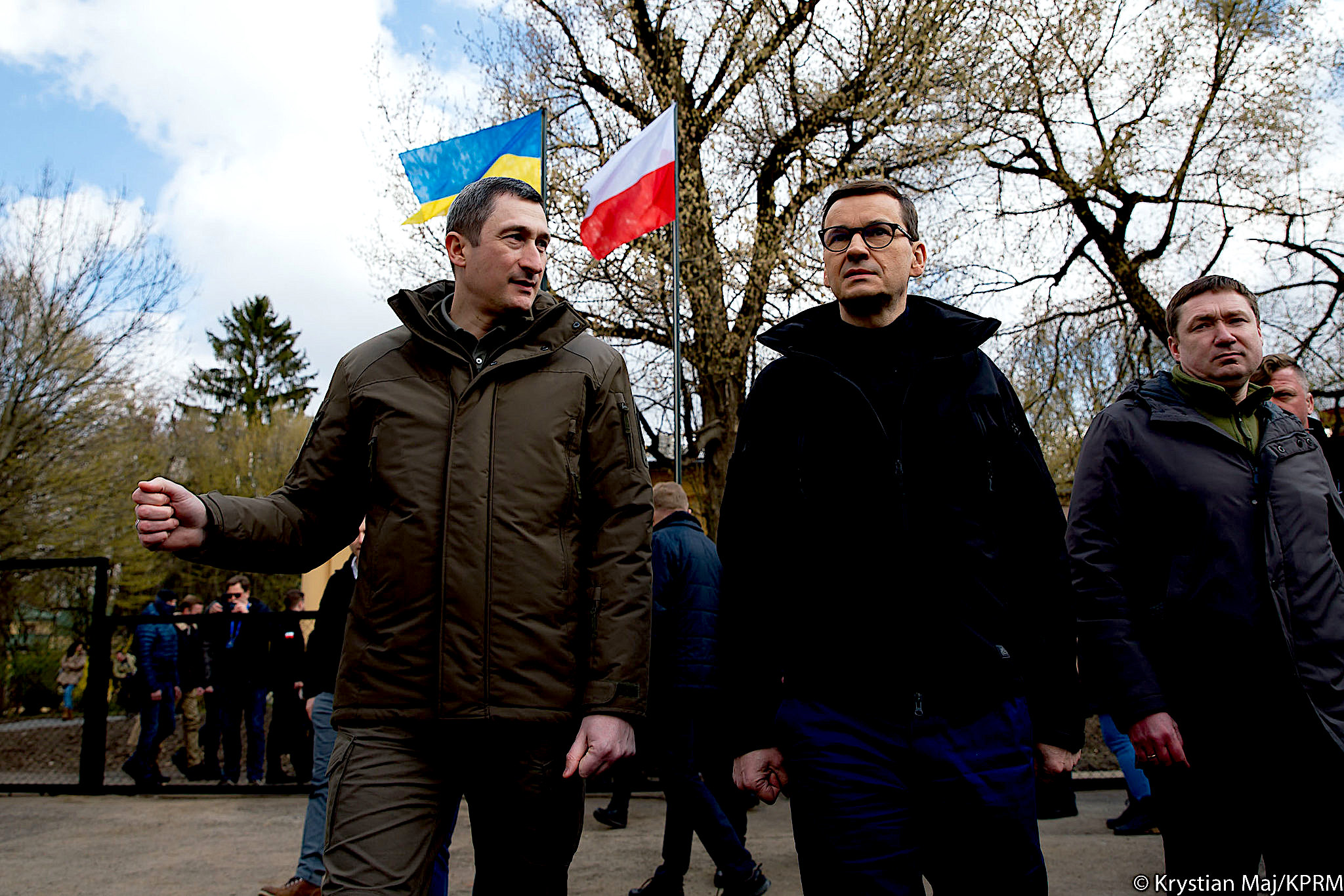 It’s been over two months since Russia invaded Ukraine. Poland has been at the forefront of countries calling for more extensive sanctions against Moscow, arming Ukraine and accommodating more and more Ukrainian refugees.

Prime Minister Mateusz Morawiecki has been leading the charge in Europe against relenting in any way on the EU’s anti-Russian sanctions policy, accompanied by such rhetorical ploys as comparing Russian President Vladimir Putin not only to Hitler, but also to Joseph

In a battle of words with Emmanuel Macron, Morawiecki has criticized the French president for keeping lines of communication with the Kremlin open. “One should not negotiate with criminals, one should fight them, ” Morawiecki said.

In early March, Morawiecki revealed his “10 point plan to save Ukraine,” which pretty much amounted to total isolation of Russia and exerting pressure on the Russian populace to move against Putin.

Morawiecki seems to have clearly set his sights on getting rid of the Russian leader via a mixture of hard sanctions, upping the losses for the Russians in Ukraine and boldly making it clear that, as a matter of Polish policy at least, regime change in Moscow is the desired end, in all but name. Other considerations be damned. One could get the impression that Morawiecki is acting as if it is Poland that is being militarily attacked.

It might come as a surprise to many, however, that this eagerness to be in the vanguard of the West’s proxy war with Russia in Ukraine, does not, so to say, run in the family. The Polish prime minister’s father, Kornel Morawiecki, who succumbed in 2019 to pancreatic cancer at age 78 and was a legend among old school anti-Communist oppositionists, is a case in point.

Despite being the founder of one the most radically anti-Communist underground oppositionist groups in Poland in the 1980s, the Fighting Solidarity, Morawiecki Sr. in his late political career — during which he was an MP and senior marshal of the Polish Sejm — displayed an altogether different attitude towards Poland’s geopolitical position, and by extension, Russia.

If one were to throw a simplistic ideological divide between the father and the son, we can say the father was definitely the realist, while the son was and remains the hawk. 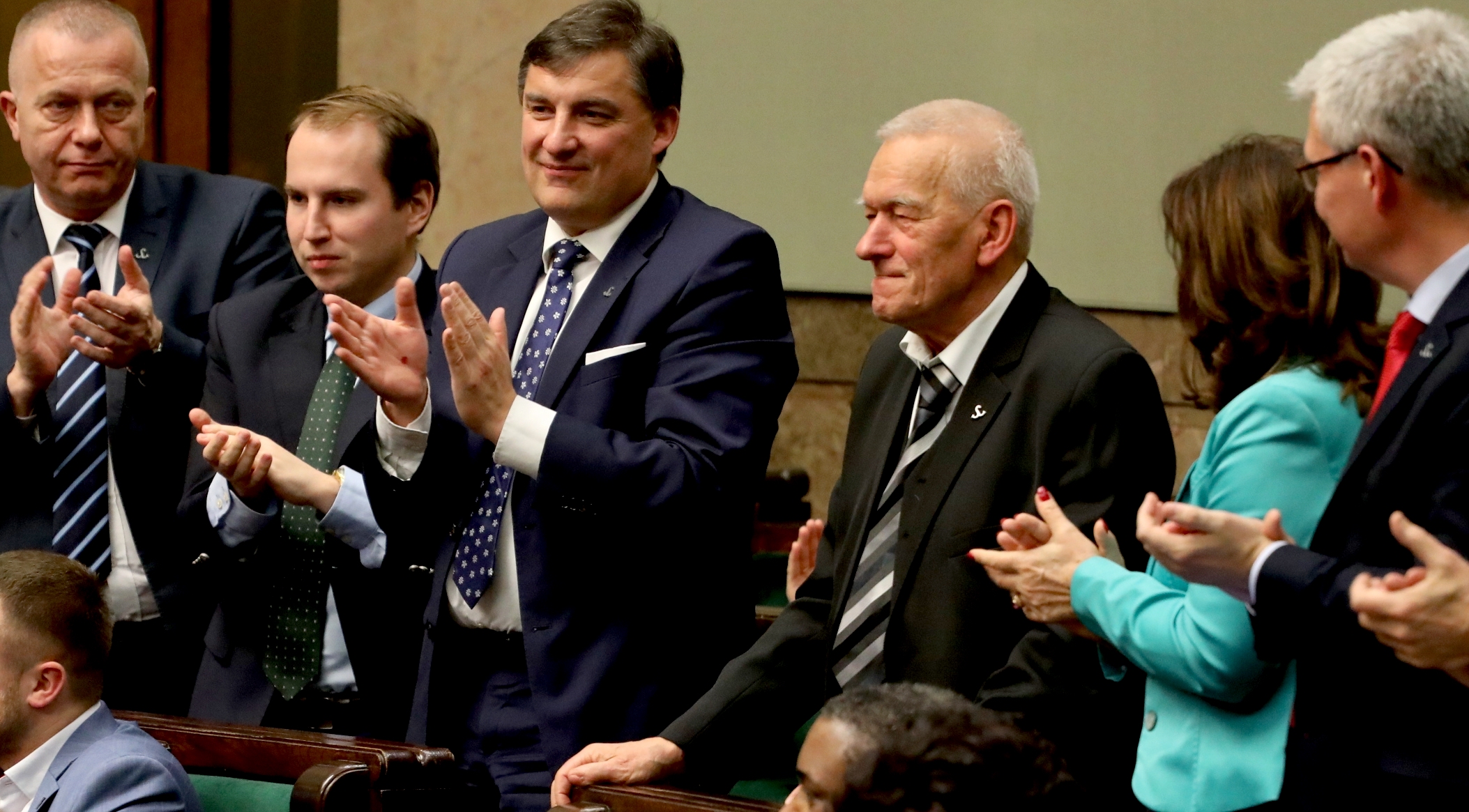 Dec. 12, 2017: Kornel Morawiecki in the Sejm during the inauguration of his son Mateusz Morawiecki as prime minister. (Rafal Zambrzycki, CC BY 2.0, Wikimedia Commons)

In an interview in 2018, Kornel Morawiecki stated that he was concerned about the lack of normal relations between the Polish authorities and the Russian president. Referring to his son, Morawiecki Senior stated:

“It would be good for Poland, for our interests, if our authorities, Mr. Prime Minister, invited Vladimir Putin to our country. It would signify progress in relations of both countries.”

He then went on to ask a question that many of us, who don’t want to see Poland dragged into a war, are asking today:

No doubt Morawiecki Sr. would remain uneasy today, considering that since his election in 2015, Polish President Andrzej Duda has not had any direct contact with Vladimir Putin in an official capacity.

When in 2019, Duda proposed to then U.S. President Donald Trump the building of a permanent American military base in Poland, which for obvious PR needs of that moment, was referred to by the head of the Polish state as “Fort Trump,” Morawiecki Sr. responded that he did not see the need to build NATO bases in Poland, because “it is like preparing us for war.”

Strong words from an icon of Polish resistance to Soviet dominance.

But those were just the opening salvos. In that same interview, Morawiecki Sr. accused the government his son was presiding over, as well as the media and elites, of “setting Poles against Russians.”

He clearly believed that it was in the vital interest of Poland to seek rapprochement with Moscow. Speaking about the attitude of his son and the leader of the ruling Law and Justice (PiS) party, Jaroslaw Kaczynski, towards Russia, Morawiecki Sr. said flatly that “Mateusz is wrong and Jarek is wrong.”

Of course, such words could not escape the criticism of the Polish mainstream, both liberal and conservative, who considered Kornel Morawiecki’s stance, in the words of one commentator, a form of indulging in “the most bizarre of fantasies.”

He responded by making it clear that he was only being guided by what he thought to be in the best interest of Poland, and becoming a pawn in Washington’s geopolitical machinations against Moscow, did not meet the smell test. “They also say about me that I am a Russian agent of influence. The fact that someone questions the wisdom of American military presence in Poland does not mean that he is an agent.”

For many, sadly, the sentiment that only Polish troops should be stationed on Polish soil, was a bridge too far, for reasons ranging from the psychological to the purely ideological.

In one of his last interviews in 2019, Morawiecki Sr. stressed:

“I want us to be independent. We fought for independence, for a Republic of solidarity and we want such a Poland. We should have good diplomatic, economic and cultural relations with the Russians. It is a nation close to us. Our Polish fate and the fate of Europe depend on it.”

War changes perspectives, obviously. We can’t say for sure that if he were alive today, Kornel Morawiecki would come out just as strongly as his son against the Russian invasion of Ukraine.

Nonetheless, barring a nuclear confrontation between the superpowers, Russia will remain Poland’s biggest neighbor and the prospects of Vladimir Putin being toppled anytime soon seem bleak at best. Whatever his thoughts on the war might have been, however, unlike his son, who eschews any thought of de-escalation, Kornel Morawiecki would most definitely embrace the late U.S. President John F. Kennedy’s counsel: “Let us never negotiate out of fear. But let us never fear to negotiate.”

The Polish political philosopher Bronislaw Lagowski once noted that when Napoleon Bonaparte traveled to Poland, Talleyrand advised him what to say in Warsaw to please the Poles: “to speak as badly as possible about Russia and to praise Polish heroism.”

This seems to be the modus operandi of the West — the United States in particular — when politically back-patting Warsaw for being useful in whichever type of war, cold or proxy, the West and Russia happen to be engaged.

Kornel Morawiecki, one of the few public voices of dissent on this crucial and in fact existential issue for Poland, knew this well. Whatever his thoughts on the current war might have been, he succinctly summed up the current sentiment of many Poles: “Our foreign policy is unfortunately reduced to playing the role of Washington’s puppet.”

Sadly, in this case, the apple has fallen very far from the tree.

Michal Krupa is a historian and commentator based in Poland. He has published in many Polish and American outlets, including The American Conservative and Chronicles: A Magazine of American Culture. His Twitter handle is: @MGKrupa

9 comments for “UKRAINE: The Realist Father of Poland’s Hawkish PM”