YouTube has removed the entire six-year archive of the author’s show “On Contact.” This censorship, he says, is about supporting what I.F Stone reminded us is what governments always do — lie.

The entire archive of “On Contact,” the Emmy-nominated show I hosted for six years for RT America and RT International, has been disappeared from YouTube. Gone is the interview with Nathaniel Philbrick on his book about George Washington. Gone is the discussion with Kai Bird on his biography of J. Robert Oppenheimer. Gone is my exploration with Professor Sam Slote from Trinity College Dublin of James Joyce’s “Ulysses.”

Gone is the show with Benjamin Moser on his biography of Susan Sontag. Gone is the show with Stephen Kinzer on his book on John Foster Dulles and Allen Dulles. Gone are the interviews with the social critics Cornel West, Tariq Ali, Noam Chomsky, Gerald Horne, Wendy Brown, Paul Street, Gabriel Rockwell, Naomi Wolff and Slavoj Zizek.

Gone are the voices of those who are being persecuted and marginalized, including the human rights attorney Steven Donziger and the political prisoner Mumia Abu Jamal. None of the shows I did on mass incarceration, where I interviewed those released from our prisons, are any longer on YouTube. Gone are the shows with the cartoonists Joe Sacco and Dwayne Booth. Melted into thin air, leaving not a rack behind.

I received no inquiry or notice from YouTube. I vanished. In totalitarian systems you exist, then you don’t. I suppose this was done in the name of censoring Russian propaganda, although I have a hard time seeing how a detailed discussion of “Ulysses” or the biographies of Susan Sontag and J. Robert Oppenheimer had any connection in the eyes of the most obtuse censors in Silicon Valley with Vladimir Putin. Indeed, there is not one show that dealt with Russia.

I was on RT because, as a vocal critic of U.S. imperialism and militarism and, of the corporate control of the two ruling parties, and especially because I support the Boycott, Divestment and Sanctions movement against Israel, I was blacklisted.

I was on RT for the same reason the dissident Vaclav Havel, who I knew, was on Voice of America during the communist regime in Czechoslovakia. It was that or not be heard. Havel had no more love for the policies of Washington than I have for those of Moscow. 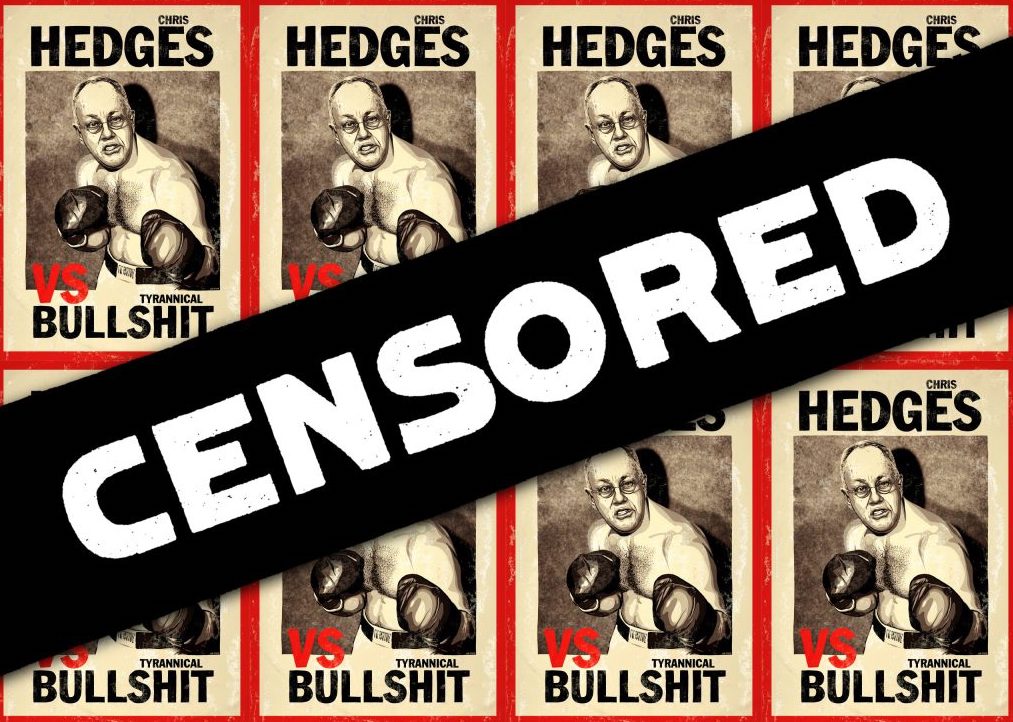 Are we a more informed and better society because of this wholesale censorship? Is this a world we want to inhabit where those who know everything about us and about whom we know nothing can instantly erase us?  If this happens to me, it can happen to you, to any critic anywhere who challenges the dominant narrative.

And that is where we are headed as the ruling elites refuse to respond to the disenfranchisement and suffering of the working class, opting not for social and political change or the curbing of the rapacious power and obscene wealth of our oligarchic rulers, but instead imposing iron control over information, as if that will solve the mounting social unrest and vast political and social divides.

The most vocal cheerleaders for this censorship are the liberal class. Terrified of the enraged crowds of QAnon conspiracy theorists, Christian fascists, gun-toting militias, and cult-like Trump supporters that grew out of the distortions of neoliberalism, austerity, deindustrialization, and the collapse of social programs, they plead with the digital monopolies to make it all go away. They blame anyone but themselves.

Democrats in Congress have held hearings with the CEOs of social media companies pressuring them to do more to censor content. Banish the troglodytes. Then we will have social cohesion. Then life will go back to normal. Fake news. Harm reduction model. Information pollution. Information disorder. They have all sorts of Orwellian phrases to justify censorship.

Meanwhile, they peddle their own fantasy that Russia was responsible for the election of Donald Trump. It is a stunning inability to be remotely self-reflective or self-critical, and it is ominous as we move deeper and deeper into a state of political and social dysfunction.

What were my sins? I did not, like my former employer, The New York Times, sell you the lie of weapons of mass destruction in Iraq, peddle conspiracy theories about Donald Trump being a Russian asset, put out a 10-part podcast called the “Caliphate” that was a hoax, or tell you that the information on Hunter Biden’s laptop was “disinformation.” I did not prophesize that Joe Biden was the next FDR or that Hillary Clinton was going to win the election.

This censorship is about supporting what, as I.F Stone reminded us, governments always do – lie. Challenge the official lie, as I often did, and you will soon become a nonperson on digital media.

Julian Assange and Edward Snowden exposed the truth about the criminal inner workings of power. Look where they are now.

This censorship is one step removed from Joseph Stalin’s whitewashing of nonpersons such as Leon Trotsky out of official photographs. It is a destruction of our collective memory. It removes those moments in the media and the press when we attempted to examine our reality in ways the ruling class did not appreciate.

The goal is to foster historical amnesia. If we don’t know what happened in the past, we cannot make sense of the present. 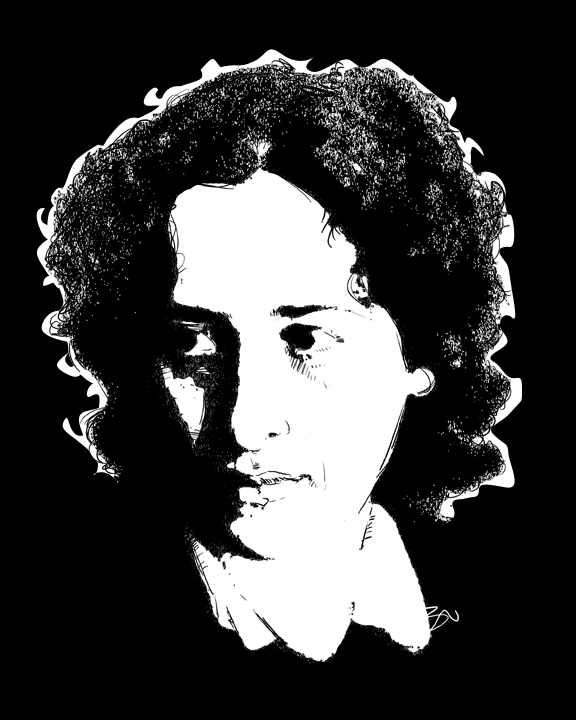 “The moment we no longer have a free press, anything can happen,” Hannah Arendt warned.

“What makes it possible for a totalitarian or any other dictatorship to rule is that people are not informed; how can you have an opinion if you are not informed? If everybody always lies to you, the consequence is not that you believe the lies, but rather that nobody believes anything any longer. This is because lies, by their very nature, have to be changed, and a lying government has constantly to rewrite its own history. On the receiving end you get not only one lie — a lie which you could go on for the rest of your days — but you get a great number of lies, depending on how the political wind blows. And a people that no longer can believe anything cannot make up its mind. It is deprived not only of its capacity to act but also of its capacity to think and to judge. And with such a people you can then do what you please.”

I am not alone. YouTube regularly removes or demonetizes channels, which happened to Progressive Soapbox, without warning, usually by arguing that the content contained videos that violated YouTube’s community guidelines. Status Coup, which filmed the Jan. 6 storming of the Capitol, was suspended from YouTube for “advancing the false claims of election fraud.” My video content, by the way, primarily consisted of book covers, quotes from passages of books and author photos, but it got disappeared anyway.

The de-platforming of voices like mine, already blocked by commercial media and marginalized with algorithms, is coupled with the pernicious campaign to funnel people back into the arms of the “Establishment” media such as CNN, The New York Times and The Washington Post. In the U.S., as Dorthey Parker once said about Kathrine Hepburn’s emotional range as an actress, any policy discussion ranges from A to B. Step outside those lines and you are an outcast.

The Ukraine war, which I denounced as a “criminal war of aggression” when it began, is a sterling example. Any effort to put it into historical context, to suggest that the betrayal of agreements by the West with Moscow, which I covered as a reporter in Eastern Europe during the collapse of the Soviet Union, along with the expansion of NATO might have baited Russia into the conflict, is dismissed.

My show, dedicated primarily to authors and their books, should have been, if we had a functioning system of public broadcasting, on PBS or NPR. But public broadcasting is as captive to corporations and the wealthy as the commercial media, indeed PBS and NPR run commercials in the guise of sponsorship acknowledgements. The last show on public broadcasting that examined power was Moyers & Company. Once Bill Moyers went off the air in 2015, no one took his place.

A few decades ago, you could hear independent voices on public broadcasting, including Martin Luther King, Malcolm X, Howard Zinn, Ralph Nader, Angela Davis, James Baldwin and Noam Chomsky. No more. A few decades ago, there were a variety of alternative weeklies and magazines. A few decades ago, we still had a press that, however flawed, had not rendered whole segments of the population, especially the poor and social critics, invisible.

It is perhaps telling that our greatest investigative journalist, Sy Hersh, who exposed the massacre of 500 unarmed Vietnamese civilians by U.S. soldiers at My Lai and the torture at Abu Ghraib, has trouble publishing in the United States. I would direct you to the interview I did with Sy about the decayed state of the American media press, but it no longer exists on YouTube.

Chris Hedges is a Pulitzer Prize–winning journalist who was a foreign correspondent for 15 years for The New York Times, where he served as the Middle East bureau chief and Balkan bureau chief for the paper. He previously worked overseas for The Dallas Morning News, The Christian Science Monitor and NPR. He is the host of show The Chris Hedges Report.

Author’s note to readers: There is now no way left for me to continue to write a weekly column for ScheerPost and produce my weekly television show without your help. The walls are closing in, with startling rapidity, on independent journalism, with the elites, including the Democratic Party elites, clamoring for more and more censorship. Bob Scheer, who runs ScheerPost on a shoestring budget, and I will not waiver in our commitment to independent and honest journalism, and we will never put ScheerPost behind a paywall, charge a subscription for it, sell your data or accept advertising. Please, if you can, sign up at chrishedges.substack.com so I can continue to post my Monday column on ScheerPost and produce my weekly television show, The Chris Hedges Report.

This column is from ScheerPost, for which Chris Hedges writes a regular column. Click here to sign up for email alerts.

53 comments for “Chris Hedges: On Being Disappeared”