What the U.S. left behind: Baher Kamal reports on the widespread misery left in the wake of the 20-year brutal war by the U.S.-led military coalition.

A woman and her children fled conflict in Lashkargah and now live in a displaced persons camp in Kandahar, southern Afghanistan. (UNICEF Afghanistan)

“The rapid increase in those experiencing acute hunger – from 14 million in July 2021 to 23 million in March 2022 – has forced households to resort to desperate measures such as skipping meals or taking on unprecedented debt to ensure there is some food on the table at the end of the day.”

“These unacceptable trade-offs have caused untold suffering, reduced the quality, quantity, and diversity of food available, led to high levels of wasting in children, and other harmful impacts on the physical and mental wellbeing of women, men, and children,” the U.N. high official warned.

[Human Rights Watch reported last week that 1-in-10 newborns have died since the start of this year, 13,000 in total.] 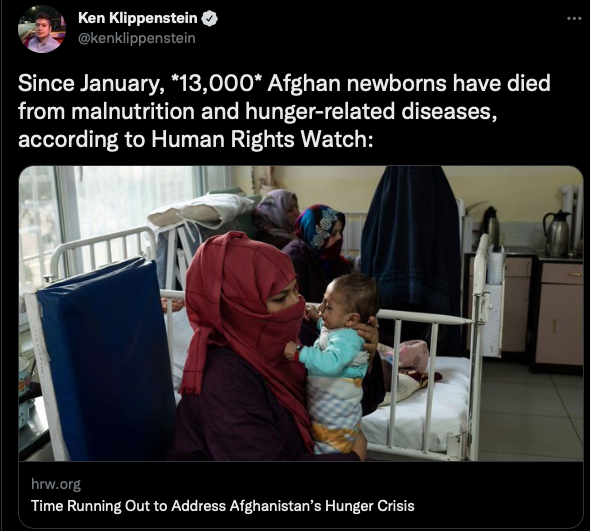 In Afghanistan, a staggering 95 per cent of the population is not eating enough food, with that percentage rising to almost 100 per cent for female-headed households. It is a figure so high that it is almost inconceivable. Yet, devastatingly, it is the harsh reality, added Alakbarov.

Hospital wards are filled with children suffering from malnutrition: smaller than they should be, many weighing at one year what an infant of six months would weigh in a developed country, and some so weak they are unable to move.

As Afghanistan continues to grapple with the effects of a terrible drought, the prospect of another bad harvest this year, a banking and financial crisis so severe that it has left more than 80 percent of the population facing debt, and an increase in food and fuel prices,  the crisis reality facing communities cannot be ignored. Enormous challenges lie ahead, said the U.N. humanitarian coordinator for Afghanistan.

[Related: The U.S. seized half of Afghanistan’s frozen assets, which could alleviate the suffering: Biden Denounced for Seizing Afghan Assets]

“Acute malnutrition rates in 28 out of 34 provinces are high with more than 3.5 million children in need of nutrition treatment support. Afghanistan’s health system is on the brink of collapse. Unless urgent action is taken, the country faces an imminent humanitarian catastrophe, warned the U.N. top humanitarian official, Martin Griffiths, last September, that’s just one month after the U.S.-led military coalition abandoned the country in a sudden, chaotic withdrawal.

“People across the country would be denied access to primary healthcare such as emergency caesarean sections and trauma care,” she said. 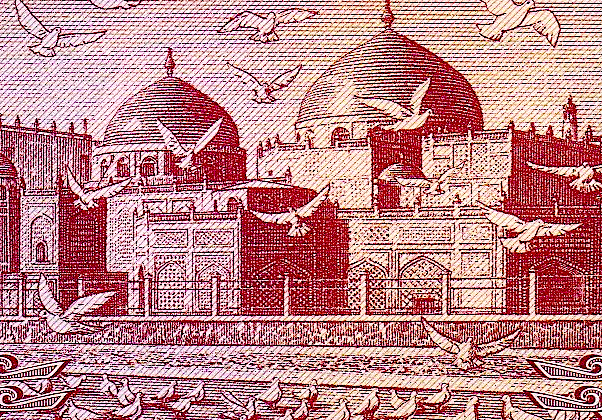 The combined shocks of drought, conflict, Covid-19 and an economic crisis in Afghanistan, have left more than half the population facing a record level of acute hunger, according to a U.N. assessment published at the end of last October.

An Integrated Food Security Phase Classification (IPC) report co-led by the Food and Agriculture Organization (FAO) and World Food Program (WFP), revealed by the end of last October that the lives, livelihoods and access to food for 22.8 million people will be severely impacted.

“It is urgent that we act efficiently and effectively to speed up and scale up our delivery in Afghanistan before winter cuts off a large part of the country, with millions of people –including farmers, women, young children and the elderly – going hungry in the freezing winter”, FAO Director-General QU Dongyu said at the time. “It is a matter of life or death.”

The IPC report found that more than 1-in-2 Afghans would face Phase 3 crisis or Phase 4 emergency levels of acute food insecurity from November through the March lean season, requiring an urgent international response to prevent a humanitarian catastrophe. This is the highest number of acutely food insecure people ever recorded by the U.N., during 10 years of conducting IPC analyses in Afghanistan.

Globally, the country is home to one of the largest numbers of people facing acute hunger.

“Hunger is rising and children are dying”, the WFP Executive Director David Beasley said in October. “We can’t feed people on promises – funding commitments must turn into hard cash, and the international community must come together to address this crisis, which is fast spinning out of control.” The report revealed a 37 percent surge in the number of Afghans facing acute hunger since its last assessment in April.

And for the first time, urban residents are suffering from food insecurity at similar rates to rural communities.

Meanwhile, rampant unemployment and a liquidity crisis are putting all major urban centers in danger of slipping into a Phase 4 emergency level of food insecurity, including formerly middle class populations.

In rural areas, the severe impact of a second drought in four years continues to affect the livelihoods of 7.3 million people who rely on agriculture and livestock to survive.

This has been the horrifying cost of another brutal war on unarmed human beings.

Baher Kamal is senior adviser to the IPS director general on Africa and the Middle East. He is an Egyptian-born, Spanish-national, secular journalist, with over 43 years of experience. Since the late 1970s, he has specialized in all development related issues, as well as international politics.

← Warnings for Washington About Cold War 2.0
The BBC’s Ukrainian War-Messager →

5 comments for “Devastation in Postwar Afghanistan”