Shadowy U.K. intel figure Hamish de Bretton-Gordon was at the forefront of chemical weapons deceptions in Syria. Now in Ukraine, he’s up to his old tricks again, writes Kit Klarenberg at The Gray Zone. 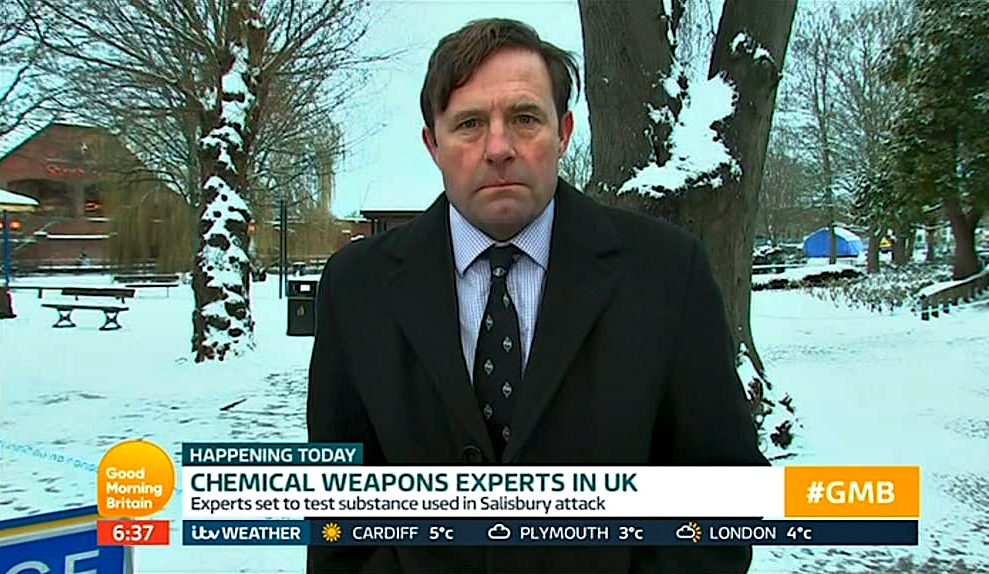 By Kit Klarenberg
The Grayzone

With Washington and its NATO allies forced to watch from the sidelines as Russia’s military advances across Eastern Ukraine and encircles Kiev, U.S. and British officials have resorted to a troubling tactic that could trigger a massive escalation. Following similar claims by his Secretary of State and ambassador to the United Nations, U.S. President Joseph Biden has declared that Russia will pay a “severe price” if it uses chemical weapons in Ukraine.

The warnings emanating from the Biden administration contain chilling echoes of those issued by the administration of President Barack Obama throughout the U.S.-led dirty war on Syria.

Almost as soon as Obama implemented his ill-fated “red line” policy vowing an American military response if the Syrian army attacked the Western-backed opposition with chemical weapons, al Qaeda-aligned opposition factions came forth with claims of mass casualty sarin and chlorine bombings of civilians. The result was a series of U.S.-U.K. missile strikes on Damascus and a prolonged crisis that nearly triggered the kind of disastrous regime change war that had destabilized Iraq and Libya.

In each major chemical weapons event, signs of staging and deception by the armed Syrian opposition were present. As a former U.S. ambassador in the Middle East told journalist Charles Glass, “The ‘red line’ was an open invitation to a false-­flag operation.”

Elements of deception were especially clear in the April 7, 2018 incident in the city of Douma, when an anti-government militia on the brink of defeat claimed civilians had been massacred in a chlorine attack by the Syrian army.

Veteran inspectors from the Organization for the Prohibition of Chemical Weapons (OPCW) found no evidence that the Syrian army had carried out any such attack, however, suggesting the entire incident had been staged to trigger Western intervention. Their report was subsequently censored by organization management, and the inspectors were subjected to a campaign of smears and intimidation.

Throughout the Syrian conflict, a self-proclaimed “chemical warrior” named Hamish de Bretton-Gordon was intimately involved in numerous chemical weapons deceptions that sustained the war and ratcheted up pressure for Western military intervention.

This Feb. 24, just moments after Russia’s military entered Ukraine, de Bretton-Gordon surfaced again in British media to claim that Russia was preparing a chemical attack on Ukrainian civilians. He has since demanded that Ukrainians be provided with a guide he wrote called, “How To Survive A Chemical Attack.”

How to Survive a Chemical or Biological Attack – this is Free – please disseminate as widely as possible to civilians in #Ukraine & surrounding countries https://t.co/tkV4Nb3PaO

So who is de Bretton-Gordon, and does his sudden reappearance as an expert voice on the Russia-Ukraine war signal a return to the dangerous U.S.-U.K. red line policy?

Following months of fevered speculation about an impending Russian invasion of Ukraine, when it finally came to pass on the early morning of Feb. 24, most were caught entirely by surprise. Media outlets and pundits scrambled to get their stories straight, while Western leaders rushed to construct a cohesive ‘response’.

By contrast, Hamish de Bretton-Gordon, a British army veteran identified by U.K. media as a “former spy,” was in no such muddle. Within just three hours, he had a fiery op-ed prepared for The Guardian, demanding the U.S. and Europe “show their steel in the face of Putin’s aggression.” Warning that Vladimir Putin was “much more willing to face off with NATO” than before, de Bretton-Gordon charged that the West “stood back and watched in Syria,” and “it must not do the same in Ukraine.”

“Syria shows what happens when you turn a blind eye and are too heavily influenced by peaceniks,” de Bretton-Gordon fulminated. “Those of us involved in interventions in Iraq and Afghanistan over the past 30 years…we look at Syria and know we should have done better. That knowledge should inform our response to Putin’s aggression now.”

In reality, Washington and its allies did not stand back and watch in Syria; it waged a decade-long proxy war employing jihadist paramilitaries and airstrikes on Damascus, then occupied oil-producing portions of the country and subjected its citizens to crippling sanctions, which to this day deprive them of food, electricity and vital medical supplies.

Of all people, de Bretton-Gordon – whose Twitter profile once identified him as a member of 77th Brigade, the British Army’s official psychological warfare division – is uniquely placed to know of these horrors. After all, he played a pivotal role in promoting and extending the dirty war through the management of information surrounding chemical weapons incidents.

As The Grayzone has revealed, the involvement of de Bretton-Gordon in the Syrian conflict dates back to at least 2013, when by his own admission he was engaged in a covert effort to smuggle soil samples out of the opposition-occupied areas. This work would have inevitably placed him in extremely close quarters with jihadist elements raking in Western funding while benefiting from NATO training and weapons.

Contemporary media reports reveal the U.K.’s MI6 was engaged in a sample-gathering effort in the country at the very time time de Bretton-Gordon was inside Syria, strongly suggesting his linkage to the foreign intelligence agency. One article makes abundantly clear the purpose of the soil-sample exercise was to push the U.S. into intervening by proving government culpability for alleged chemical weapons attacks.

Other forms of evidence were also collected on-the-ground by de Bretton-Gordon, and provided to a number of official investigations into chemical attacks. In at least one instance – an OPCW/U.N. Joint Investigative Mechanism (JIM) probe into a purported chemical strike in Talmenes, April 2014 – videos submitted by CBRN Taskforce, a shady organization he founded in Aleppo, were found to show clear signs of falsification.

De Bretton-Gordon threw his chemical weapons expertise into further doubt when he told British media that any common refrigerator could be transformed into a chemical weapon, falsely claiming that R22 refrigerant cylinders contained material for improvised chlorine bombs. “Somebody could go to a waste site where people chuck away fridges [in the U.K.] and get a whole bunch of those things and blow them up,” the supposed arms specialist claimed.

I find it fascinating that Hamlisch DBG can pass himself off as a “chemical weapons expert” while putting forward the notion of Sarin and Chlorine being mixed together…but since the media bought off on it, he gets away with it.

De Bretton Gordon has gone as far as claiming to a British tabloid that Russia could deploy missiles and hand grenades containing the highly deadly Soviet-era chemical agent Novichok “in any future war with the West.”

Such absurd commentary and subterfuge has done nothing to dent de Bretton-Gordon’s credibility, however. His mainstream profile has only grown over time, with outlets invariably presenting him as a courageous human rights defender risking his life to train local doctors and rescue workers.

On more than one occasion, however, de Bretton-Gordon has directly involved Western journalists in MI6’s soil gathering efforts. For instance, during a 2014 podcast interview with Wilton Park, an NGO funded by the U.K. Foreign Office, de Bretton-Gordon boasted of his responsibility for a story in The Times of London alleging a Syrian chemical attack in the town of Sheikh al-Maqsood.

“In March last year there was a reported sarin attack in Sheikh al-Maqsood and I helped the Times – chap called Anthony Lloyd who very sadly got shot two weeks ago – to cover this story and tried to get samples to the U.K. for analysis … I won’t go into the details of that,” he recalled.

There to Blame Damascus

Then-Prime Minister David Cameron invoked the Sheikh al-Maqsood incident to increase pressure on Damascus, citing “the picture as described to me by the Joint Intelligence Committee” as the basis for his assertion of a chemical attack against the town by the Syrian army.

Throughout the dirty war on Syria, de Bretton-Gordon routinely cropped up in the media attributing gas attacks and war crimes to Syrian and Russian forces, and fear-mongered about their implications for future conflicts with the West.

The latter role is one de Bretton-Gordon has enthusiastically resumed throughout the war in Ukraine, aggressively hyping the threat to Western countries. His messaging has tracked seamlessly with that of the U.S. government, which initiated a program months before Russia’s military operation to prepare Ukraine’s security sector for an impending weapons of mass destruction attack.

Months before war, U.S. trains Ukrainians in the threat of “targeted weapons of mass destruction attacks”

Back in May 2021, the State Department announced that Washington had conducted a “virtual training exercise” with “partners” in Kiev, including domestic security services, law enforcement, and first responders, to “identify, respond to, and investigate assassinations involving weapons of mass destruction,” due to “recent events in Europe” highlighting “the real threat of government-sanctioned, targeted weapons of mass destruction attacks.”

Along the way, Ukrainians were tutored in “[identifying] the medical symptoms that indicate WMD material use, the attack cycle involved in WMD assassination attempts, and the specific measures that enable safe and secure detection and response to WMD incidents.”

Quite why this instruction was given at this particular time is unclear, as was the “recent events in Europe” to which the press release referred. Perhaps the State Department was alluding to the alleged novichok poisoning of the Russian opposition figure Alexei Navalny in August 2020. On what grounds that failed assassination necessitated a grand, multi-agency training exercise in dealing with “targeted WMD attacks” is anyone’s guess.

Whatever the purpose of the U.S. training program was, Ukrainian security personnel can now claim they have the training to identify the precise “medical symptoms that indicate WMD material.”

This is significant, because ever since the conflict began, Kiev has exhibited an endless enthusiasm for lying, having distorted or even outright concocted events and facts whole-cloth to advance its objectives on countless occasions.

The most dangerous claims advanced by Ukrainian propagandists have been reinforced by the supposed authority of de Bretton-Gordon, who has argued that Russian chemical strikes were absolutely inevitable, based his prediction on his opinion that Moscow “has no morals or scruples.”

The self-styled chemical weapons expert has even cautioned that Putin could deploy nuclear weapons or create a pandemic “more deadly than Covid” with an Ebola weapon. He has further speculated that Russian forces may unleash a deadly virus seized from one of several Pentagon-funded biolabs in Ukraine, then blame it on the U.S.

From Syria to Ukraine

In a typical media appearance, on March 10th, de Bretton Gordon told London’s LBC radio show that “nothing is off the table at this stage.” Among the horrors he forecast was the use of white phosphorous “to set towns and cities on fire.”

Justifying his certainty, de Bretton-Gordon forcefully asserted, “the only way to take a large city or town ultimately is to use chemical weapons.” He pointed to Syria to prove his point – but without referencing his own pivotal role in escalating that conflict through the manipulation of evidence and scientifically bereft fear-mongering in the media.

Now, de Bretton-Gordon has resurfaced at the center of the aggressive push for escalation with a nuclear armed Russia. If his role in Syria is any guide, a series of cynical deceptions could be on the way.

Kit Klarenberg is an investigative journalist exploring the role of intelligence services in shaping politics and perceptions.