The supreme state prosecutor’s office of the Czech Republic has warned Czech citizens that they can be imprisoned for agreeing with Russia’s military operation in Ukraine, reports Joe Lauria. 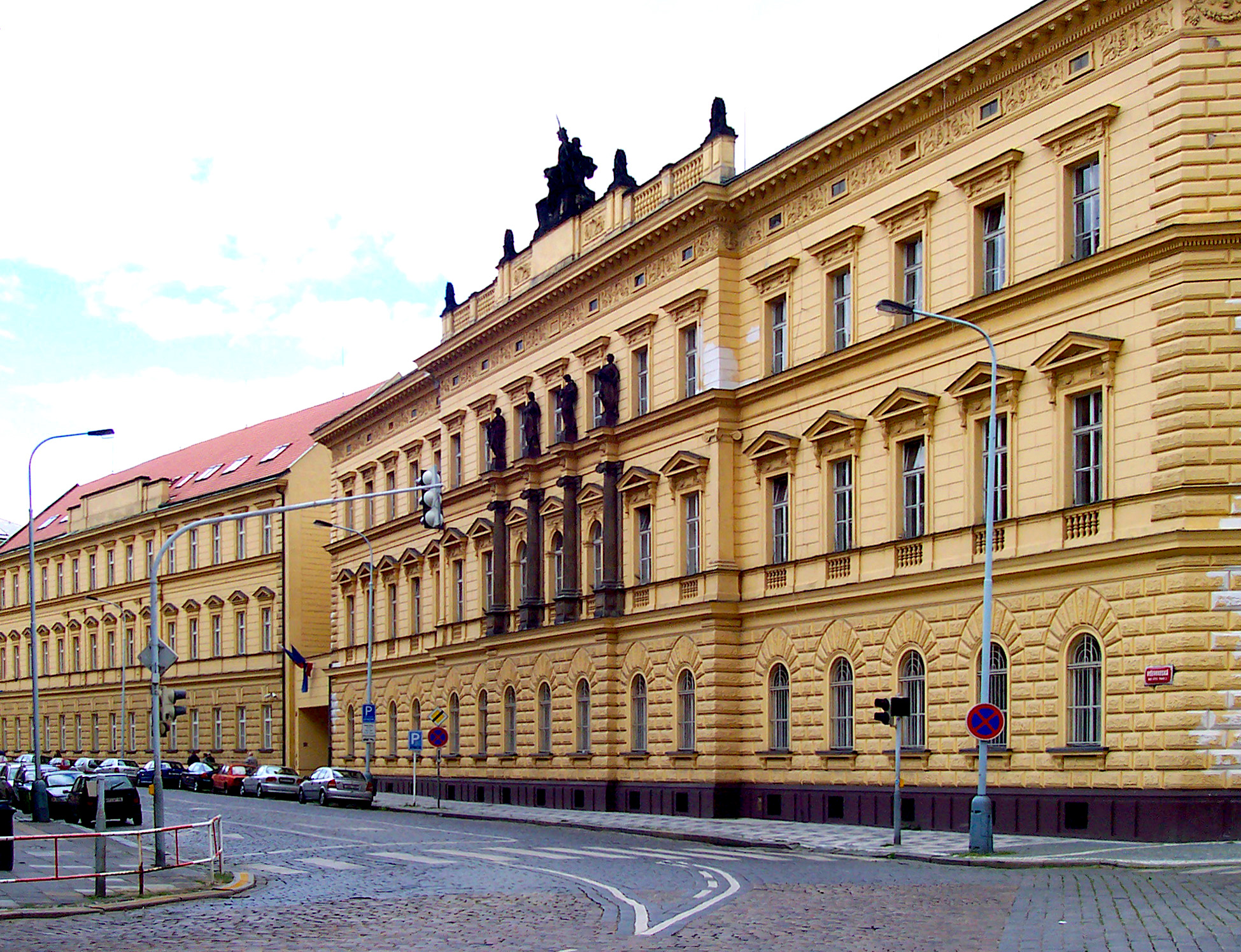 The Supreme State Prosecutor of the Czech Republic has warned its citizens that they can wind up in jail if they utter agreement with Russia’s military intervention in Ukraine.

“The Supreme Public Prosecutor’s Office considers it necessary to inform citizens that the current situation associated with the Russian Federation’s attack on Ukraine may have implications for their freedom of expression,” began a statement from the office, dated Feb. 26.

“If someone publicly (including demonstrations, the Internet or social networks) agreed (accepted or supported the Russian Federation’s attacks on Ukraine) or expressed support or praised the leaders of the Russian Federation in this regard, they could also face criminal liability under certain conditions,” the statement says.

The laws the statement cites include prohibition against “approving of a criminal offense” and “denying, questioning, approving and justifying genocide.”  The Czech Republic is a member of both the European Union and NATO. 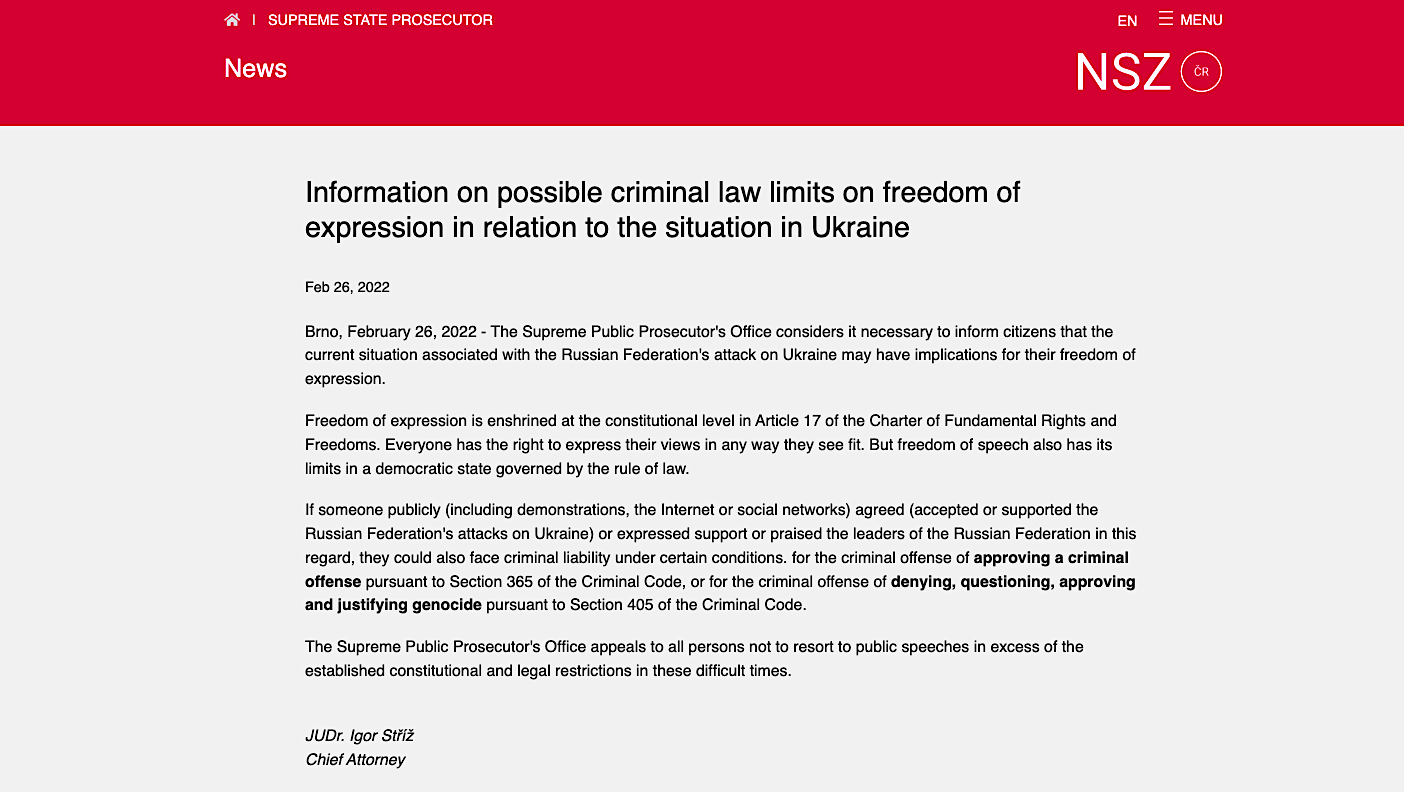 Radio Prague International reported that police have begun to monitor online communications to look for offenders.

“The chief public prosecutor, Igor Stríž, has warned that public support for the Russian aggression against Ukraine expressed at demonstrations or on social networks can currently be considered a criminal offense. He warned citizens to respect freedom of speech and not to exceed its limits. Under Czech law support for crimes against humanity or genocide are punishable by up to three years in jail. At the same time, St?íž added that the legal assessment of such acts is very complicated.

Police Presidium spokesman Ondrej Moravcík confirmed that the police will monitor potential excesses not only at public gatherings, but also in cyberspace.”

“Czech police are already investigating dozens of complaints from people who reported that someone had publicly approved and supported the Russian invasion of Ukraine. On Saturday, Attorney General Igor Stríž warned that he could face up to three years in prison for supporting Russian aggression, for example on demonstrations or social networks.”

According to the Ukrainian embassy in Prague, two people have already been arrested under these statutes for supporting Russia. It tweeted, according to Google’s translation:

“Czech law enforcement warns that public approval of Russia’s invasion of Ukraine could be classified as a ‘crime of denial, questioning, approval and justification of GENOCIDE. There are already two first cases of detainees incriminated in this paragraph of the Criminal Code.”

Slovakia and Latvia Too

“In connection with the Russian military invasion of Ukraine, the police warn that in some cases, imprisonment for 10 to 25 years to life may be threatened for the promotion of the war. The National Criminal Agency (NAKA) will adequately address the search for such crime on the Internet. … “Whoever in a crisis situation intends to incite peace in any way, promotes war or otherwise supports war propaganda, is punished by imprisonment for ten to 25 years or imprisonment for life,” the police pointed to § 417 of the Criminal Code.”

“This war also resonates in Latvia and the attempts of local supporters of the war to justify Russia’s aggression against Ukraine are also visible. In this regard, citizens are urged to report to the State Police and the State Security Service all statements and individuals who call for, support and justify Russian aggression in Ukraine.”

The Latvian law appears to be more specific than the others.

“These are the articles of the Criminal Law:

As sworn lawyer Art?rs Zvejsalnieks explains: ‘Sayings such as” Occupy and destroy Kiev, turn it into dust “, as well as messages from Russian propaganda channels that” All Ukrainians are fascists “, calls to kill Ukrainians or people of other nationalities are statements about which these articles may be applied. The same goes for these types of comments on the Internet. Fisherman also adds that it is important that such calls are made in public and are clearly meant to be taken seriously. However, it is recalled that the same applies to calls to “reckon or otherwise harm the people of Russian nationality living in Latvia'”.

The announcement, however, has drawn sharp criticism on social media.

I'm Czech. It's true. They are shutting down pro-russian websites and law enforcement is warning people, that if you say things supportive of Kremlin, it's actions in Ukraine, or if you deny that Russia is commiting war crimes, you can go to jail.

I do not support Russia, but this statement is clearly against freedom of thought and democracy.

No you aren’t at war, Ukraine is. EU is the new USSR, learn to love the boot on your neck it will only get larger and heavier as they consolidate power and turn into uniparty to hold it

Jesus. The West is finished.

Joe Lauria is editor-in-chief of Consortium News and a former U.N. correspondent for The Wall Street Journal, Boston Globe, and numerous other newspapers, including The Montreal Gazette and The Star of Johannesburg. He was an investigative reporter for the Sunday Times of London, a financial reporter for Bloomberg News and he began his professional work as a 19-year old stringer for The New York Times.  He can be reached at joelauria@consortiumnews.com and followed on Twitter @unjoe

34 comments for “Jail Time for Czechs Agreeing With Russian Intervention”