The moral: nothing is as dangerous as a dim leader convinced of his cleverness by schemers selling nostrums that promise to etch his name in the history books forever, writes Michael Brenner. 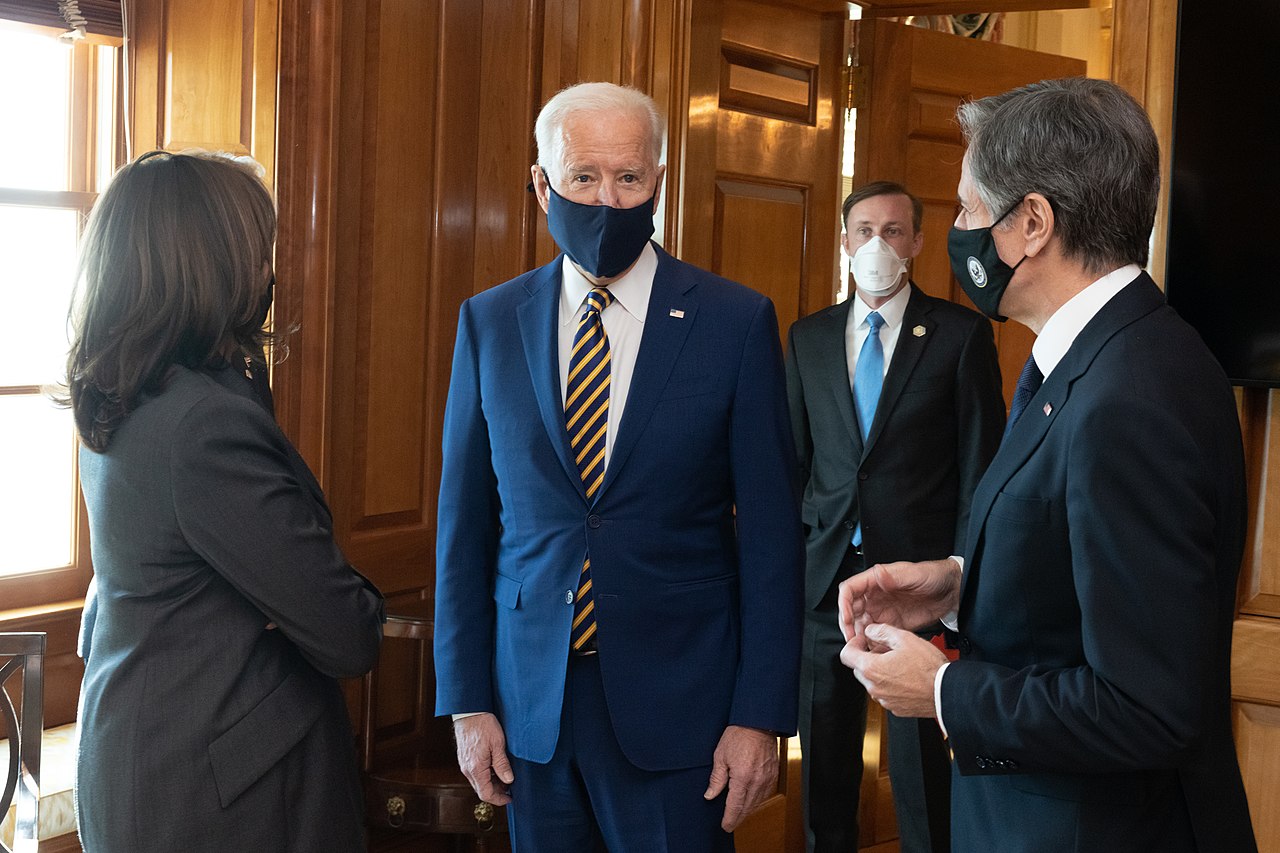 Harris, Biden, Sullivan and Blinken in a scene from ‘War on the Dnieper’. (State Dept/Wikimedia Commons.)

American cinema and theater have been in the doldrums. For many, the very thought of going out to see the latest dreary creation from Hollywood or Broadway is enough to send them searching Netflix for the colorized rerun of Lassie Finds A Home.

So, it is understandable that Washington – out of its deep concern for the mood of its citizenry – should go out of its way to provide us with a tension-laden, extravagant production worthy of comparison to Thirteen Days or Zero Dark Thirty.

War On The Dnieper was meant to be in that vein. A drama of heroic proportions to keep Americans, and much of Europe, trembling in dread as the Slavic dogs of war strain on their leash and the vise tightens on America, on Russia, on NATO and – of course – Ukraine.

Instead, we are offered a comic tragedy that faintly resembles Dr. Strangelove – on valium. Here’s a review of War On The Dnieper in calm decompression.

Acting: jarring combination of monotonous cue card recitation and overacting. Amateur cast. Exceptions are two key supporting players, seasoned professionals whose facial expressions hint at acute boredom: “How did I ever get roped into something this tedious and silly?”

Soon, at a theater near you – maybe.

Where is the Cast Now?

Joe Biden teams up with the Obamas as co-producer of an HBO series of historical dramas titled: When Conquer We Must. The first episode to air is “Havana”– to be followed by “Chapultepec,” “Tonkin Gulf,” “Shock & Awe” and “Rumors of War.” The second season comprises five episodes: “Tehran,” “Benghazi,” “Damascus,” “Odessa,” and “Quemoy & Matsu.”

Tony Blinken is closing in on Hillary’s record performance as Secretary of State in chalking up most flight miles with no evident effect – at least his suit is, anyway.

Jake Sullivan is deepening his anonymity as a highly placed administration source by cutting all ties with Facebook, Linked In, Instagram, Tik Tok and the Oprah book club.

Victoria Nuland is settling in at NATO headquarters as its new Secretary General. In her inaugural address to the ambassadorial corps, she insisted that the Alliance should stop waffling on the grave issues that confront it – proclaiming: “Extremism in the cause of democracy promotion is no vice, moderation in pursuit of the West’s rule-based international order is no virtue.”

Boris Johnson has announced that the Royal Navy will deploy a flotilla of miniature warships, with the aircraft carrier HMS Queen Elizabeth II as flagship – in the Serpentine at Hyde Park. He proclaims that HMG wants to show all and sundry that Britain still punches above its weight (especially to those sundries who vote).

The German government of Olaf Scholz falls as leaders of the 3 coalition parties cannot agree on a definition of key concepts: e.g. ‘ambiguous,’ ‘unity,’ ‘maybe.’

A still rattled Swedish government petitions NATO to join the alliance, assuming that the ‘open door’ policy remains in force – bolstering their case by underscoring their nonpareil anti-submarine capabilities in shallow waters.

Liz Truss opens a ‘Special Relationship’ consulting office named GEO with dual headquarters in London and Washington – where she awaits the imminent arrival of Kamala Harris as her American partner.

Volodymyr Zelensky returns to his career as a comedian specializing in impersonations of public figures. His Café Bandara is a roaring success as a boisterous crowd of Azov veterans nightly applauds his imitations of Biden, Blinken, Austin, Nuland, Poroshenko, Macron, Stoltenberg, Erdogan and Scholz.

Vladimir Putin is still in the Kremlin – occasionally amusing himself by rewatching the famous Battle on The Permafrost scene in Eisenstein’s Alexander Nevsky or planning for the annual celebration of February 16 at 3:00 A.M. in honor of the historic triumph in the Mother of All Phony Invasions. This year’s special guest will be Arthur Sulzberger, publisher of The New York Times, who will lay a wreath at the Monument to the Unknowing Journalist.

Xi Jinping is said to be resting at a mountain clinic where he was treated for recurrent hiccups brought on by bouts of uncontrollable laughter.

9 comments for “FILM REVIEW: ‘War on the Dnieper’”