The U.S. president told reporters at the White House that Putin has made up his mind to attack and will be unable to “change the dynamic” in Europe, writes Joe Lauria. 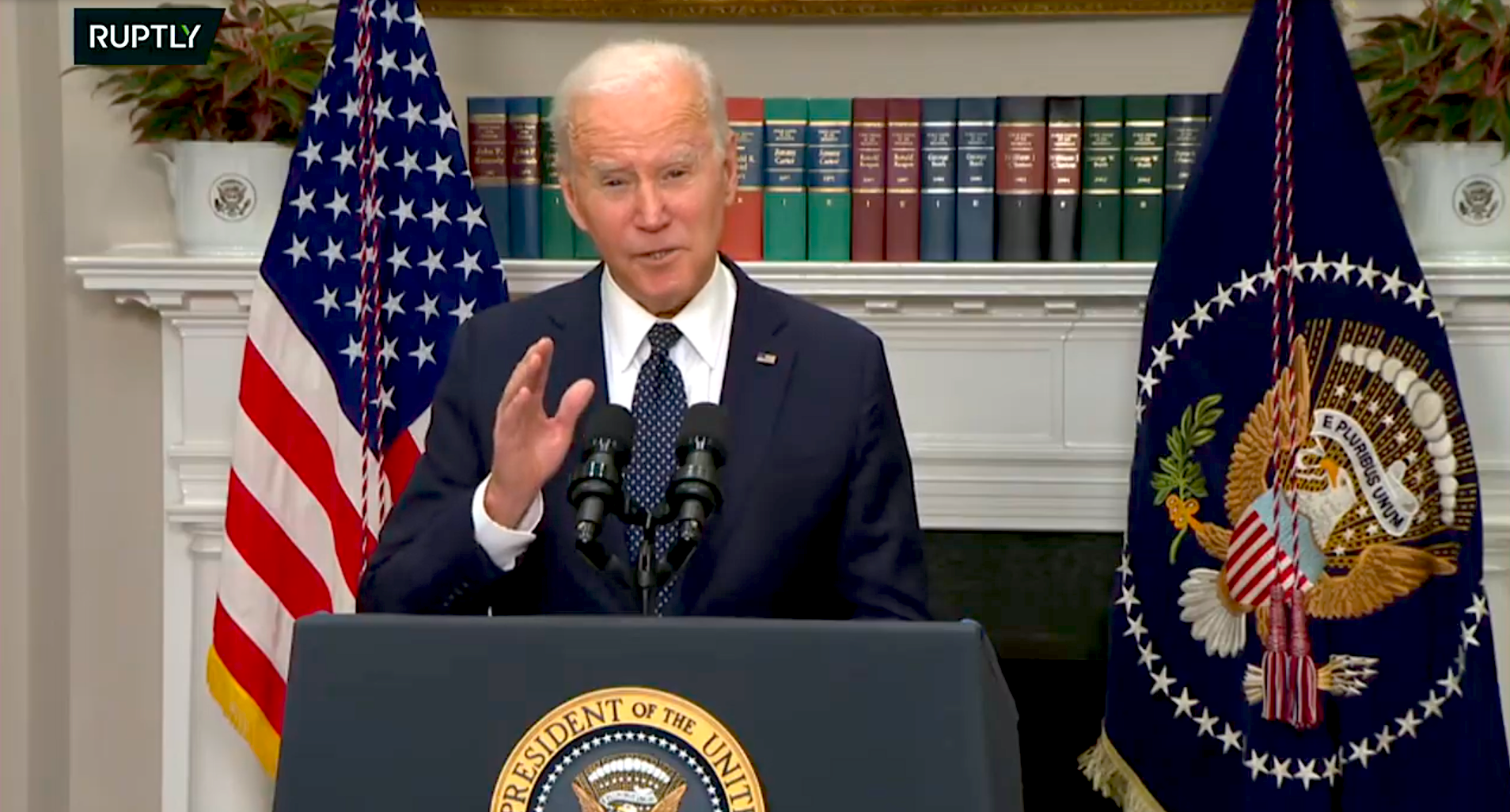 President Joe Biden said Friday he’s convinced Russian President Vladimir Putin has decided to invade Ukraine in the coming days and that Russia would fail to create a new  system in Europe that takes its security into account.

“As of this moment I’m convinced he has made the decision” to invade, Biden told a reporter in response to a question at a White House press briefing. Asked how he knows this, Biden said, “We have a significant intelligence capability.”

Biden also flatly asserted that the capital, Kiev, would be attacked:

“Russian troops currently have Ukraine surrounded.  We have reason to believe Russian forces are planning and intend to attack Ukraine in the coming week, in the coming days. We believe they will target the capital Kyiv, a city of 2.8 million innocent people.”

If such a horrific scenario were true, wouldn’t Washington have sent its military to defend its ally? That the U.S. hasn’t, undercuts the credibility of U.S. intelligence.

“We also will not send troops in to fight in Ukraine, but we will continue to support the Ukrainian people,” he said, apparently as they are being slaughtered in their beds by Russian bombs — the only conclusion that can be drawn.

For Biden, supporting the Ukrainian people translates into $650 million spent by the U.S. in the past year to “bolster Ukraine’s defenses,” and U.S. arms manufacturers’ profits. Even with all this hardware, the Ukrainian military is no match for Russia’s, as the U.S. would be.

“The United States and its allies and partners will support the Ukrainian people,” Biden said. “We will hold Russia accountable for its actions. … The entire free world is united” against Russia and sanctions will be imposed once this invasion happens.

If you were Ukrainian, living in Kiev, how would you feel if the president of the United States just said he’s convinced your city will be bombed by a major military power in days and all he’ll do for you is punish your attackers by hitting their finances? Or maybe you are like some Ukrainians, including your president, who thinks this invasion is a figment of Biden’s imagination (and who has left the country just before his nation is supposed to be attacked!)

NATO at the Crux

You might also conclude that this isn’t about you at all, but about the U.S. and NATO not allowing Russia to say enough to NATO’s threatening expansion towards its borders. Instead of sending U.S. troops to defend you, the U.S. sent more troops to Eastern Europe, nowhere near the expected theater of war.

“The United States and its allies are prepared to defend every inch of NATO territory from any threat to our collective security,” Biden said at the White House, though the U.S. is not claiming that any NATO nation faces attack.

Russian troop deployments near Ukraine happen regularly. But this time the U.S. cried “Invasion!” Why?

Because this time the Russian troop movement coincided with Moscow presenting draft treaty proposals to the U.S. and NATO drawing a deep redline after decades of objecting to the Western military alliance moving ever closer to Russia, a country that was invaded by and defeated the largest European powers of the 19th and 20th centuries.

The U.S. reacted to these bold proposals by changing the subject. It went on offense, accusing Russia every day of planning to invade Ukraine.

The direct response to the first proposal was the opposite of what was demanded: more NATO troops were sent to the former Warsaw Pact states, instead of sending U.S. troops to defend Ukraine. Ukraine does not need to be a NATO member to request U.S. forces. Ukraine has never made this request because it doesn’t believe an invasion is imminent.

Perhaps the most significant thing Biden said on Friday is that Putin “believes he has the ability to change the dynamics in Europe in a way that he cannot.” Translation: the U.S. will never sign those treaties to roll back NATO deployments, remove long-range missiles in Eastern Europe and keep Georgia and Ukraine out of the alliance.

The key word in a White House readout last week after a Putin-Biden phone call was “diminish,” as in Russia will be “diminished” if it invades Ukraine through both sanctions and world condemnation. Diminishing Russia is Washington’s aim. Neither will happen without the invasion.

Biden also shot down the notion that Ukrainian government forces are planning an offensive against Donbass.

The leaders of two largely ethnic Russian breakaway provinces in eastern Ukraine on the border with Russia earlier Friday asked their civilian populations to flee to Russia because of an impending offensive from government forces in Kiev. That could draw regular Russian units in to protect civilians, giving the Americans the invasion they seem to be begging for.

Biden acknowledged there’s been a “major uptick” in ceasefire violations. But he blamed them all on “Russian-backed fighters attempting to provoke Ukraine in the Donbass.”  Biden said there’s “more and more disinformation being pushed out to the Russian public, including Russian-backed separatists, claiming that Ukraine is planning to launch a massive offensive attack in the Donbass.”

“Well look,” Biden went on, “There is simply no evidence of these assertions and it defies basic logic to believe the Ukrainians would chose this moment, with well over 150,000 troops arrayed on its borders, to escalate a year-long (sic) conflict.”  Biden said this was “consistent with the Russian playbook that has been used before, to set up a false justification to act against Ukraine.”

Of course if a U.S.-backed offensive has begun in order to draw Russia in, Biden would cover it up by calling talk of an offensive Russian disinformation. Biden praised the “great restraint” of Ukrainian forces at the contact line. “They have refused to allow Russia to bait them into war,” he said.

But who is baiting whom?

← Russia Begins Preparing for Refugees From Donbass
FILM REVIEW: ‘War on the Dnieper’ →