Here’s what imperial propagandists achieve by framing Fox News host Tucker Carlson and others as a treasonous foreign intelligence operative. 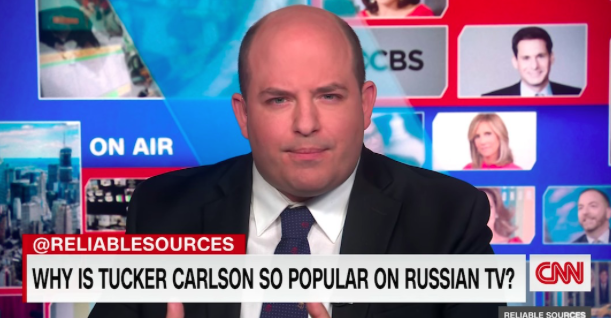 Mass media pundits have recently insinuated or outright asserted that Fox News host Tucker Carlson is literally an agent of the Russian government.

Carlson, who is being made an example of, has been accused of promoting Russian propaganda by mainstream narrative managers for frequently criticizing the Biden administration’s hawkish posture toward Russia regarding the entirely unsubstantiated claim that Moscow is preparing to launch an unprovoked military invasion of Ukraine.

We’ve been seeing things like Anderson Cooper innocently musing that “It is striking how neatly Kremlin propaganda seems to dovetail with Carlson’s talking points” and this CNN segment from December with Reliable Sources host Brian Stelter and tinfoil hat Russiagater Julia Ioffe wondering aloud about why Russian state media seem to be so fond of Carlson.

By mid-January, Democratic Party operatives were openly demanding that Carlson be investigated for violations of the Foreign Agents Registration Act.

“This isn’t journalism, it’s an ongoing FARA violation. Tucker Carlson needs to be prosecuted as an unregistered agent of the Russian Federation and treason under Article 3, Sec. 3, Clause 1 of the U.S. Constitution for aiding an enemy in hybrid warfare against the United States,” tweeted former DNC official Alexandra Chalupa, best known for colluding with the Ukrainian government in 2016 on opposition research against Donald Trump.

This isn’t journalism, it’s an ongoing FARA violation. Tucker Carlson needs to be prosecuted as an unregistered agent of the Russian Federation and treason under Article 3, Sec. 3, Clause 1 of the U.S. Constitution for aiding an enemy in hybrid warfare against the United States. https://t.co/5JkLuCKoBn

The accusations and insinuations increased, eventually leading to Carlson outright denying being a Russian agent in a recent interview with The New York Times saying,

“I’ve never been to Russia, I don’t speak Russian. Of course I’m not an agent of Russia.”

As you would expect, this denial was then spun by the same demented mainstream pundits who’ve spent the last five years being wrong about Russia as evidence that Carlson is a Russian agent.

“Tucker Carlson told The New York Times he’s not a Russian agent amid controversy over his pro-Kremlin stance,” blares a headline by Business Insider.

“What would a Russian agent say if asked if they were a Russian agent?” tweeted former FBI special agent Clint Watts in response to Carlson’s denial.

“They are pushing the belief that anyone is suspicious and sinister for questioning the official narrative about Russia.”

“Narrator: After he helped destroy American Democracy, it turned out he was, indeed, a Russian agent … though a rather silly one,” added MSNBC’s cartoonish “intelligence” expert Malcolm Nance.

“Tucker Carlson is walking proof that you don’t need to be an agent to be a useful idiot,” former FBI agent Peter Strzok told MSNBC’s Nicole Wallace, apparently less willing to commit to the bit than his FBI peers.

“Why hasn’t Tucker Carlson registered as a foreign agent?” reads a viral tweet from the notorious Lincoln Project.

[Consortium News was similarly attacked on the weekend by PropOrNot, the anonymous group that smears U.S. critics as Russian agents, as well as by Louise Mensch, the former British MP and current right-wing provocateur. CN was on PropOrNot’s original 2016 list, and its founding editor Robert Parry was repeatedly smeared as a “Kremlin stooge” for his independent reporting. The Washington Post called PropOrNot “experts” but allowed them to anonymously attack websites.]

Gray Russian propaganda outlets (like "consortiumnews" here) are leveraging Zelensky's "don't panic" rhetoric to pretend that that the US & UK "want war". https://t.co/6zNyDMYDVQ

We are a Virginia-based, reader-funded, non-profit publication since 1995. Editor is fmr. WSJ correspondent. Deputy Ed. fmr. WSJ copy desk. We make our own editorial judgements. Smearing someone you disagree with as supporting a foreign power is the oldest trick in the book.

I’ve never gotten used to the insane McCarthyite accusations which U.S. liberals will hurl without a second thought at anyone who disagrees with them. Every time it happens it startles and alarms me, and this latest trend of claiming that opposition to U.S. military posture toward a nuclear superpower constitutes evidence of being a treasonous foreign intelligence operative is a marked uptick in the madness.

I’m highlighting this deranged behavior not to defend the odious Carlson, but to point out that it works very much in the U.S. empire’s favor to have a bunch of influential narrative managers aggressively manufacturing the consensus that anyone who criticizes America’s posture toward Russia is suspicious and untrustworthy.

Anyone Can Be Suspect

That’s the message that people are receiving from this line that’s being pushed by narrative managers and ex-federal agents. Anyone who is successfully indoctrinated with this belief will become inoculated against wrongthink about that nation because they will reflexively distrust the motives of anyone who says anything that differs from the officially authorized line.

That’s the real value of this framing for the imperial propagandists. They don’t care about Carlson, who serves their agendas more often than not. They care about making sure that current and future establishment narratives about Russia will be swallowed hook, line and sinker by the mainstream public without the slightest twinge of gag reflex. You don’t even need to silence dissent if you can simply render it impotent.

It’s worth considering the possibility that all the artificially manufactured Russia hysteria we’ve seen over the last five years has been geared toward building public support for the exact escalations we are seeing today. After all, it says a lot that Russiagate began with unevidenced claims by U.S. intelligence agencies who have an extensive track record of lying, resulted in the reignition of a new cold war against a nation long targeted for destruction by the U.S. intelligence cartel, and now there are tons of weapons being flown in to Ukraine and U.S. troops are being moved to Eastern Europe in response to a threat we’ve still seen no evidence is actually real.

Whoever controls the narrative controls the world. If you can control what people believe about a certain thing, then you can control what they will do and what they will allow in response to that thing. Controlling people’s beliefs about reality is controlling their reality. If you can convince people that anyone who disputes what you’re saying about a government you don’t like is suspicious and not to be trusted, then you can keep them believing everything you say about that government.

It’s clear that it is very, very important to the narrative managers that we believe what we are told about Russia. Now we’re just waiting to find out toward what specific end that agenda is being driven.

29 comments for “Caitlin Johnstone: Smearing US Critics as ‘Russian Agents’”