The U.S. has called for a U.N. Security Council meeting on Monday at 10 am in order for Russia to “explain itself” over U.S. allegations that Moscow will “imminently” invade Ukraine, a charge even Kiev has denied. Watch it here.

The United States has called for a 10 am EST meeting Monday of the U.N. Security Council in New York in order for Russia to “explain itself” over what the U.S. says is Russia’s imminent plans to “invade” Ukraine. One problem for the U.S. is that even the Ukrainian government doesn’t believe Russia is ready to invade.

“Our voices are unified in calling for the Russians to explain themselves,” Ambassador Linda Thomas-Greenfield said on ABC’s This Week on Sunday. “We’re going into the room prepared to listen to them, but we’re not going to be distracted by their propaganda.”

Thomas-Greenfield will face off against Russia’s U.N. ambassador, Nebenzia Vassily Alekseevich, who will likely remind her that Kiev asked the U.S. to turn down the war rhetoric. Alekseevich can also be expected to spell out how Russia sees the menacing history of NATO’s expansion towards Russia’s borders, that Russia is not planning to invade Ukraine and why Moscow has proposed draft treaties with the U.S. and NATO to create a new security arrangement in Europe.

It’s far from clear whose “voices are unified” with the U.S. on the 15-member council. China has already made its position known on Ukraine, calling for all sides to “remain calm and refrain from doing things that stimulate tension.”

Zhao Lijian, the Foreign Ministry spokesman, said Thursday that “China and Russia see each other as a priority in our respective diplomacy. There is no ceiling to China-Russia mutual trust, no forbidden zone in our strategic cooperation and no limit on how far our longstanding friendship can go.”

China and Russia are two thirds of the five permanent council members with veto power. France, another permanent member, has also taken a very different approach to the crisis than the U.S., with President Emmanuel Macron telling the European Parliament this month that he essentially agrees with Russia on the need for a new security architecture in Europe.

“What we need to build is a European order founded on principles and rules to which we have committed, and which we established not against or without Russia, but with Russia,” he said.  As a NATO member, however, it will be interesting to see how France incorporates this thinking into its Security Council speech without alienating the U.S.

Though Ukraine is not a council member, countries that are a party to a dispute are normally invited to address a Security Council meeting. On Friday, President Volodymyr Zelensky, president of Ukraine, the country supposedly at the mercy of Russian “aggression,” said “”it is not certain that an attack will take place.”

Ukrainian intelligence’s assessment was different than Washington’s, he said. “If you look only at the satellites you will see the increase in troops and you can’t assess whether this is just a threat of attack or just a simple rotation,” said Zelensky.  He also blamed the U.S. and Western media for creating hysteria. “They keep supporting this theme [of invasion], this topic. And they make it as acute and burning as possible. In my opinion, this is a mistake.”

Zelensky is not the only Ukrainian leader to deny that there is a serious threat from Moscow. The New York Times reported last week:

“Ukraine’s defense minister has asserted that there had been no change in the Russian forces compared with a buildup in the spring; the head of the national security council accused some Western countries and news media outlets of overstating the danger for geopolitical purposes; and a Foreign Ministry spokesman took a swipe at the United States and Britain for pulling the families of diplomats from their embassies in Kyiv, saying they had acted prematurely.”

But will Ukraine’s ambassador challenge the U.S. position sitting across from the U.S. representative and with the world watching?

Zelensky also supported the diplomatic efforts led by Germany and France to implement the 2015 Minsk agreement to bring autonomy to two breakaway Ukrainian provinces and a permanent peace.  Ukraine may well push this line at the meeting.  The war in Ukraine erupted in 2014 after a U.S.-backed coup overthrew the democratically-elected president causing Crimea to vote to rejoin Russia and Donetsk and Luhansk to declare independence from Ukraine. Kiev attacked, and in eight years of an and off again war about 14,000 people have been killed.

Among all council members the U.S. can count on permanent member Britain to give it its staunchest support. Britain has begun playing an increasing role with the United States in preparing its populations for war, reminiscent of the lead-up to the 2003 U.S-U.K. invasion of Iraq.

The British Foreign Office, without providing any evidence at all, has said Russia is planning to “install a pro-Russian leader in Kyiv as it considers whether to invade and occupy Ukraine.” This week Prime Minister Boris Johnson said an invasion would become “a painful, violent and bloody business” for Russia. 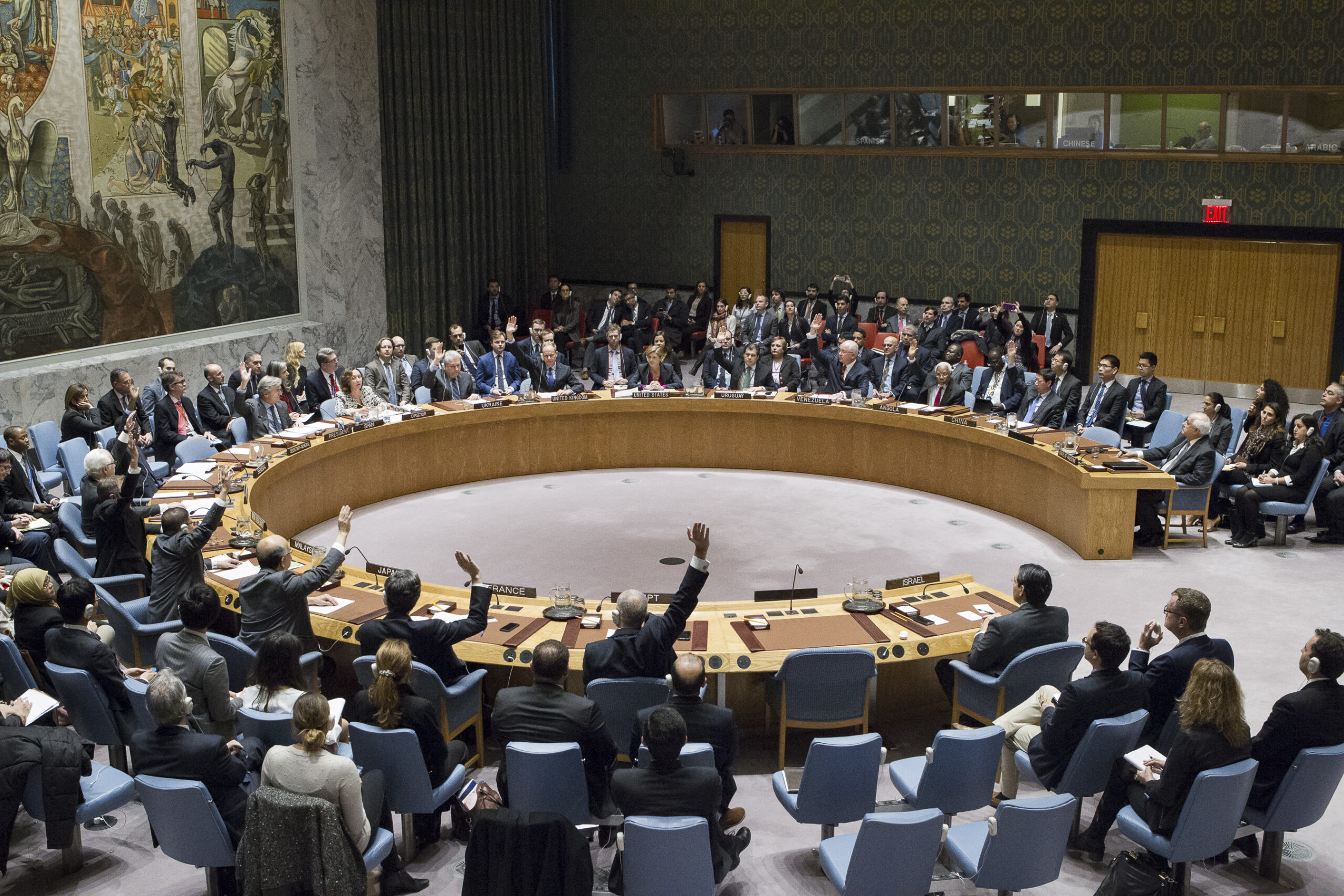 How the ten non-permanent members address the issue also largely depends on their relationship with the U.S. and whether they want to risk it if they disagree. Norway, the council president for January, is a NATO member and to some extent may support the U.S. line. India, weighing up its relations with China and Russia as well as the U.S. may be more circumspect.

Ireland, which joined the NATO Partnership for Peace in 1999, has never sough membership as guards its neutrality and is unlikely to take a pro-U.S. or pro-Russian position. Albania became a full NATO member in 2009 and receives about $20 million a year in foreign aid and is unlikely to challenge the U.S. at the council.

Gabon and Ghana are far from the action in Central Europe.  The U.S. State Department describes U.S. relations with Gabon as “excellent,” and says the U.S. has a “close and enduring friendship” with Ghana, which “engages in regular joint military training exercises and other security cooperation with the United States,” according to the Congressional Research Service.

In regards to its relations with Russia, Ghana’s Foreign Minister Shirley Ayorkor Botchwey, said in an article Monday she expected Russia to do more for Africa. “Although, for a relationship lasting this long with Africa, one would have expected it to move past where it is now. In short, there is still room for improvement, in fostering particularly stronger economic ties,” she said.

Mexico, under the leftist leadership of Andrés Manuel López Obrador, criticizes U.S. foreign policy but it also knows on which side of the Rio Grande the power resides. Still the Mexican intervention will be worth watching.

Brazil’s speech might be among the most interesting. Conservatives in Brazil are apparently in an uproar because President Jair Bolsonaro is going ahead with a trip to Russia to meet Vladimir Putin at the end of February. The Guardian reported:

“Ricardo Rangel, a columnist for the conservative magazine Veja, urged ministers to resign over ‘the most insane trip of all’. ‘Showing support for Putin just as he threatens to wage a war of conquest is unforgivable from the point of view of the US or Europe, our main partners along with China,’ he wrote, predicting ‘a diplomatic nightmare’ if an invasion was launched during Bolsonaro’s visit.”

There is no resolution before the council and a joint statement, which can only be issued by consensus, is unlikely given the strong divide between the U.S. and Russia.

← Protest Near White House Against War With Russia
Caitlin Johnstone: Smearing US Critics as ‘Russian Agents’ →