Novelist Abdulrazak Gurnah ‘s Nobel Prize invites us to ponder Germany’s colonial past between the Scramble for Africa and the First World War in what is now Tanzania, Burundi and Rwanda, writes Tom Menger. 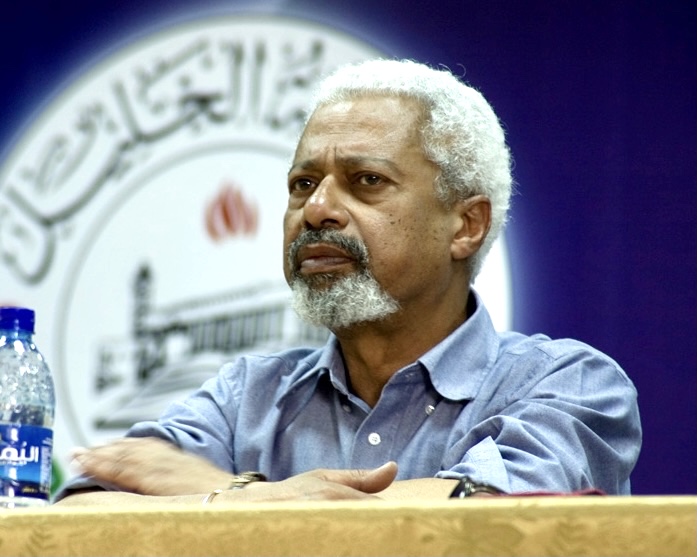 By Tom Menger
Africa is a Country

When Abdulrazak Gurnah was awarded the Nobel Prize in Literature in October 2021, the jury honored “his uncompromising and compassionate penetration of the effects of colonialism.”

With East Africa being central to much of Gurnah’s work, German colonialism is a regular presence in his novels, more precisely the colony of German East Africa, the biggest German colony of all, which comprised modern Tanzania, Burundi, and Rwanda.

Although the history of this territory has been thoroughly studied, it still very much stands in the shadow of contemporary public debates on the German genocides perpetrated against the Herero and the Nama, as well as the debate on the continuities between that genocide and the Holocaust.

German East Africa is especially prominent in two of Gurnah’s novels: the early Paradise (1994) and the recent Afterlives (2020). They invoke several themes. The first, perhaps unsurprisingly, is colonial violence. Though such violence is not always in the foreground of Gurnah’s books, it is always present, with his characters suffering from the vicious Mdachi, or Germans, and their African soldiers, the askari.

German colonial rule in East Africa began with violence, when Hermann von Wissmann waged war on the coastal populations from 1889 to 1890, after they had resisted the attempt of the German East Africa Company to run the colony as a private enterprise. The hanging in 1889 of Al Bushiri, one of the revolt’s leaders, is orchestrated as a grand spectacle, an incisive event in Afterlives.

As recent research has made apparent, European perpetrators of colonial violence employed such “spectacles” of brutal violence as they believed these would send a message to what British colonizers called “the native mind.”

Gurnah shows how colonial masters cared little for the so-called “native mind,” which they perceived as monolithic and unchanging.

While German violence frequently shocks the local population, it remains equally incomprehensible: Paradise relates, for instance, how the Germans “hanged some people for reasons no one understood.”

Sometimes the “spectacles” of violence didn’t impress the local population, even when an askari in Afterlives brags about the “merciless angry bastards” of the Schutztruppe colonial force whose German officers are “high-handed experts in terror.”

Once the Germans subjugated the coast in 1890, they turned their attention to wresting control of the Arab-dominated caravan trade that ranged from the sea to the Congo. Its takeover is the backdrop for Paradise: “There will be no more journeys now the European dogs are everywhere,” one caravan guide bemoans. 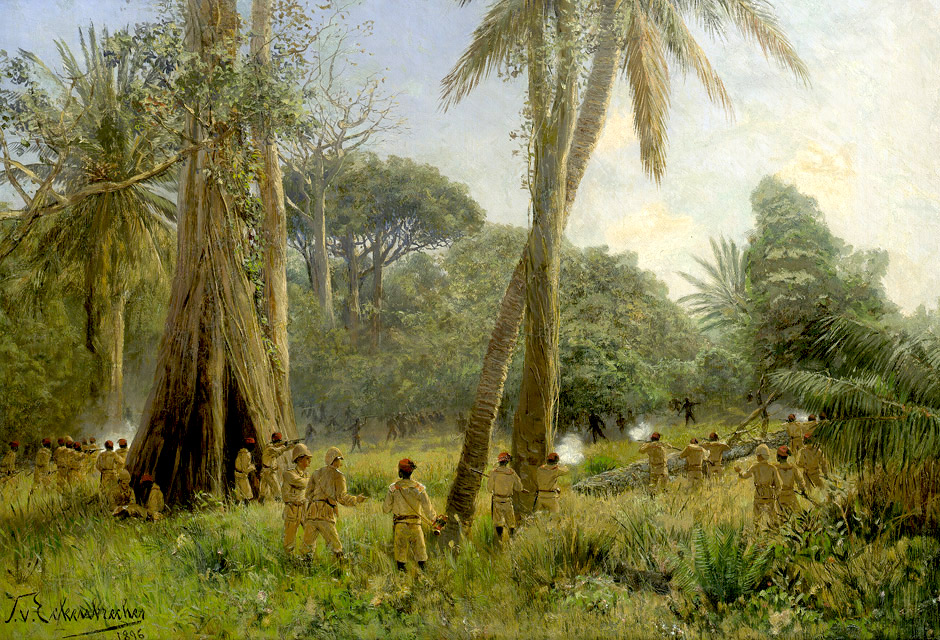 But this was only the beginning of German conquest. German rule continued to penetrate inland until the turn of the 20th century. The wars that ensued were characterized by especially destructive violence. Indiscriminate targeting of fields, harvests, and villages was part of the colonial wars’ standard repertoire (not only that of the Germans), to starve the evasive enemies into submission.

Weaving in German epithets, Gurnah explains through an askari character: “That was the way the Schutztruppe worked. At the slightest sign of resistance, the schwein were crushed and their livestock slaughtered and villages burned.”

The most devastating episode in this mode of warfare was the Maji Maji War of 1905-1907, when several ethnicities simultaneously revolted against the forced labor and punitive taxation of colonial rule. The war provides the initial setting for Afterlives, though the violence remains away from the East African coast and in the background of the story.

Still, Gurnah is unambiguous about the gruesomeness of the war: “The Germans have killed so many that the country is littered with skulls and bones and the earth is soggy with blood.” Research estimates that the war cost up to 300,000 lives, principally due to the starvation that resulted from the scorched-earth tactics.

When the First World War reached the shores of East Africa, Europeans for the first time battled other Europeans in the region. As Gurnah emphasizes, though, the armies that faced off in this theater were mostly Africans and Indians, who constituted the rank-and-file of both sides’ colonial forces.

On the German side, the commander Paul von Lettow-Vorbeck, who saw himself outnumbered by British, Belgian and Portuguese forces, pursued a guerilla-like retreat, which he maintained until the war’s end. This campaign earned him renown in Germany for decades thereafter. 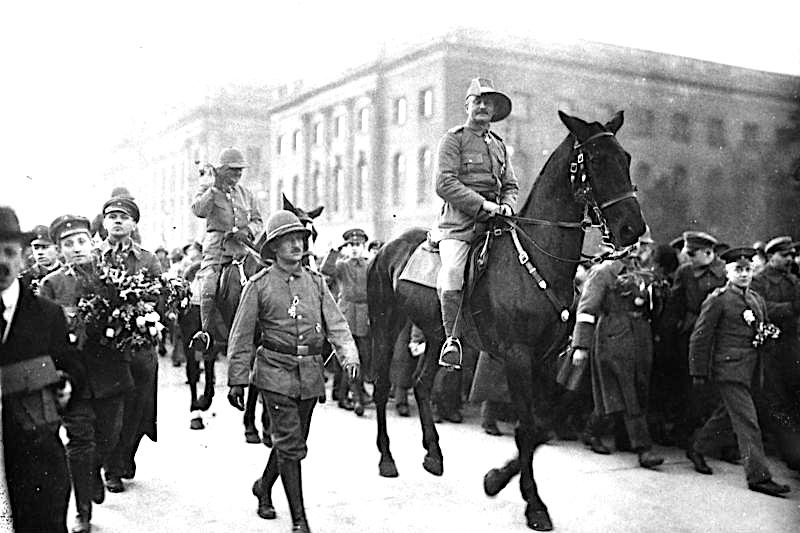 German General Paul Lettow-Vorbeck in a parade in Berlin in 1919. (Bunde, (Wikimedia Commons)

However, the post-war glorification of the commander masked the brutal reality of the retreat, in which Lettow-Vorbeck’s troops ruthlessly confiscated the stores of the local population to feed themselves, and then proceeded to burn everything in their wake to stall their enemies.

The result — once again — was desperate hunger. Moreover, tens of thousands of African civilians were conscripted as porters and died of exhaustion. Local populations that resisted faced severe reprisals, as in Afterlives, where a corporal executes a village elder with a bullet to the head.

The trauma induced by the horrific German retreat is a recurring theme in the book. Current research suggests that several hundred thousand lives were lost in East Africa during the First World War, and many hundreds of thousands more after the Spanish Flu descended on an already emaciated and devastated population.

Reading these novels as just a literary treatment of colonial violence would not do them justice. They also provide a rich view into the lives of colonized people. Gurnah, who himself was born under British colonial rule on the island of Zanzibar, pays particular attention to the lives of the coastal population and its African, Indian, and Arab influences.

In this cosmopolitan milieu, Islam, as religion and worldview, and Swahili, the lingua franca, were most often the connective elements. It is this worldliness that has recently brought this region to the attention of global history. It shows globalization as not driven exclusively by Western actors. A dense net of connections across the Indian Ocean, the East African coast, the Horn of Africa, Madagascar, the Comoros, the Arabian Peninsula and the west coast of India prevailed here centuries before European colonization. Traders in Zanzibar could activate networks to take out loans in India, and Islamic scholars moved freely between the various centers of this world.

With great sensitivity and sometimes a fairy-tale atmosphere, Gurnah shows his characters living their lives in spite of colonialism. They grow up, gain experience, enjoy wealth or suffer poverty, and fall in love. Sometimes the colonial masters are relegated to the background. These novels tell stories of resilience in which the colonized are not merely victims.

Toward the end of Afterlives, Gurnah engages the question of continuity between German colonialism and Nazism. He explores this through the life of a character,  Ilyas, an askari whose whereabouts after 1918 long remain obscure in the book until he relocates to Germany in the 1920s.

There he found work as a singer, performing at propaganda events with a revisionist-colonial theme. Nazi violence would soon outdo even the German violence in Africa. After an affair with a white woman, Ilyas is interned in a concentration camp in 1938, where he died in 1942.

There are similar life stories documented of actual former askari in Germany.  Many Germans of African descent spent the war in concentration camps. After the war, some remained in Germany, forming an enduring Black community.

Tom Menger is a historian of colonial violence, war, and trans-imperial history between the periods 1880 to 1914.

This article is from Africa is a Country and is republished under a creative commons license. It was adapted from Gewalt ohne Grund.