A group of physicians is warning about the entry of Wall Street investors and other profit-seekers via an experiment known as “direct contracting.” A Trump-era pilot program that could result in the complete privatization of traditional Medicare in a matter of years is moving ahead under the Biden administration, a development that — despite its potentially massive implications for patients across the U.S. — has received scant attention from the national press or Congress.

On Tuesday, a group of physicians from around the nation traveled to Washington, D.C., intending to demand that the Health and Human Services Department immediately stop the Medicare experiment, which is known as direct contracting.

The doctors were denied the right to present HHS with a petition signed by more than 1,500 physicians who believe the direct contracting pilot threatens “the future of Medicare as we know it.”

Update: Our delegation of doctors was DENIED the right to deliver petitions to @HHSGov demanding an end to Medicare Direct Contracting.

Please CALL @SecBecerra at 202-205-5445 and ask that he put an end to this dangerous and insidious program today! pic.twitter.com/2FdRZUlpfI

Advocates have been publicly sounding the alarm about the program for months, warning that it could fully hand traditional Medicare over to Wall Street investors and other profit-seekers, resulting in higher costs for patients and lower-quality care.

“Everything we know about direct contracting should be cause to halt the pilot,” Diane Archer, the founder of Just Care USA and the senior adviser on Medicare at Social Security Works, told Common Dreams in an email. “Direct contracting effectively eliminates the more cost-effective traditional Medicare program designed to ensure that people with complex health conditions get the care they need.”

But healthcare campaigners’ concerns have fallen largely on deaf ears in Congress and the Biden administration, which has allowed much of the pilot program to proceed as planned.

Congress ‘Asleep at the Switch’

In a phone interview with Common Dreams ahead of Tuesday’s demonstration at HHS headquarters, Dr. Ed Weisbart — chair of the Missouri chapter of Physicians for a National Health Program (PNHP) — said that Congress is largely “asleep at the switch” as Wall Street-backed startups and private insurance giants close in on traditional Medicare, a 56-year-old program that covers tens of millions of U.S. seniors.

“People don’t know that it’s happening,” Weisbart, one of the physicians traveling to the nation’s capital, said of the direct contracting experiment. “Most people in Congress don’t know that it’s happening. We’ve started having some of these conversations with congressional staff, and we’re hoping to have many more of them next week when we’re there, but it’s not on their radar either.”

“That’s the disturbing part,” he added. “How radical the transformation of Medicare is becoming under this new model, how widespread it will be — it’ll be the entire book of business — and yet that’s occurring with neither the awareness nor consent of Congress.” The direct contracting program was established by the Center for Medicare and Medicaid Innovation (CMMI) during the waning months of the Trump administration, which included former pharmaceutical industry executives, Wall Street bankers and right-wing policy consultants notorious for gashing public health programs.

Under the direct contracting model, so-called Direct Contracting Entities (DCEs) are paid monthly by the Centers for Medicare and Medicaid Services (CMS) to cover a specified portion of a patient’s medical care — a significant shift from traditional Medicare’s direct reimbursement of providers.

DCEs are allowed to pocket the funding they don’t spend on care, an arrangement that critics believe will incentivize the private middlemen to skimp on Medicare patients — many of whom could be auto-enrolled into DCEs without their knowledge or permission.

According to a policy brief released by PNHP, “Virtually any company can apply to be a DCE, including investor-backed startups that include primary care physicians, [Medicare Advantage] plans and other commercial insurers, accountable care organizations (ACOs) or ACO-like organizations, and for-profit hospital systems.”

“Applicants are approved by CMS without input from Congress or other elected officials,” the group notes.

At present, the pilot includes 53 DCEs in 38 states, Washington, D.C., and Puerto Rico. Drs. Richard Gilfillan and Donald Berwick pointed out in a September article for Health Affairs that 28 of the current DCEs are controlled by investors, not healthcare providers. A second tranche of DCEs is expected to debut in January 2022.

Dr. Ana Malinow, a physician from San Francisco who took part in Tuesday’s attempt to deliver the petition, said in a statement that “Medicare Advantage — the first wave of Medicare privatization — showed us that inserting a profit-seeking middleman into public coverage does not save money for taxpayers, but rather costs more money while also taking away care choices from seniors.”

“If left unchecked, the direct contracting program will hand traditional Medicare off to Wall Street investors, without input from seniors, doctors, or even members of Congress,” said Malinow. “Health and Human Services Secretary Xavier Becerra has the power to stop this Trump-era program in its tracks, and must do so now.” 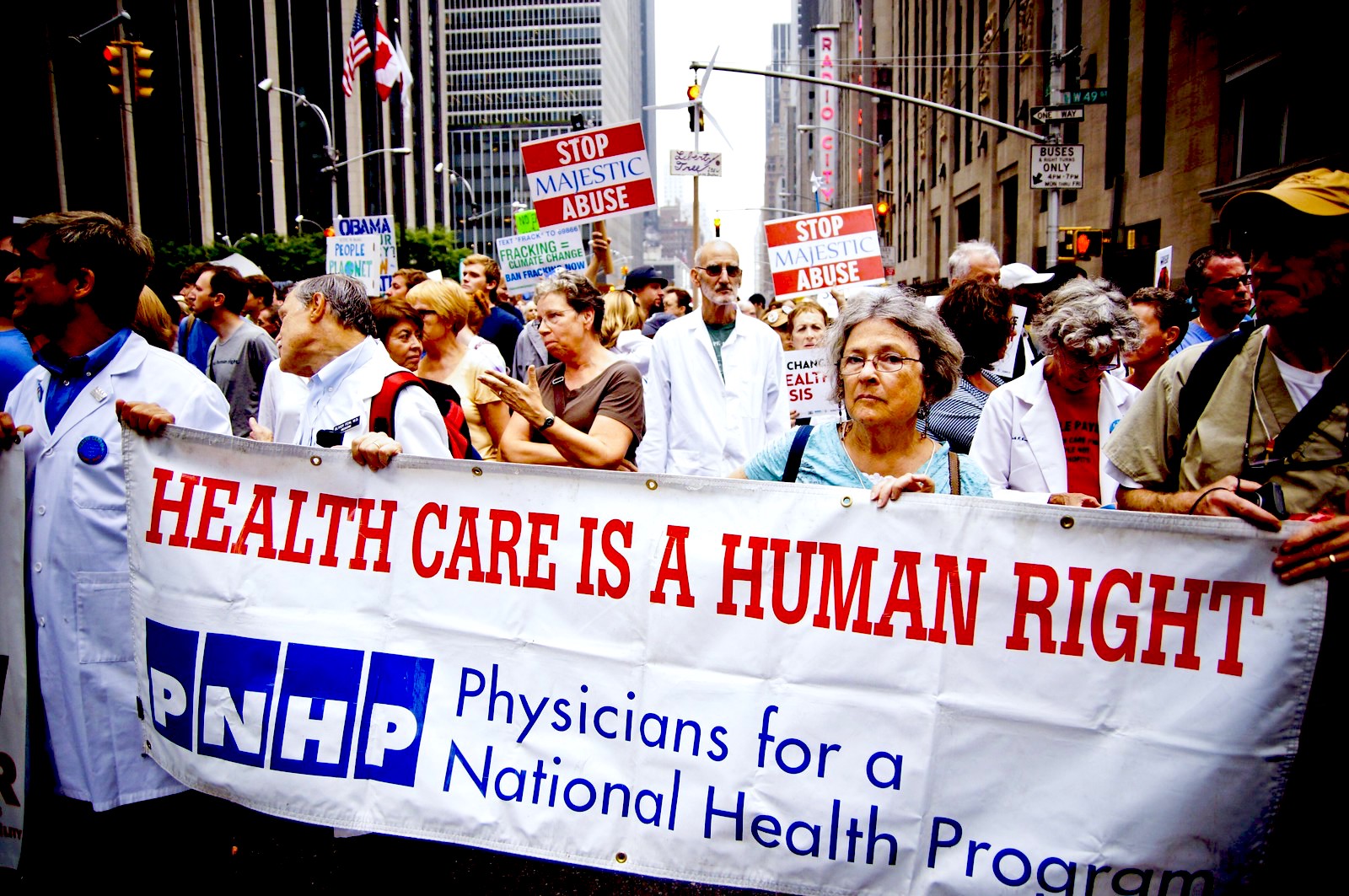 The direct contracting experiment was launched by the Trump administration but actually has its roots in the Affordable Care Act (ACA), which established CMMI with the stated goal of identifying “ways to improve healthcare quality and reduce costs in the Medicare, Medicaid, and Children’s Health Insurance Program (CHIP) programs.”

The ACA granted CMMI, also known as the Innovation Center, the authority to test alternative payment and service delivery models on a national scale without congressional approval — latitude that, in the hands of the Trump administration, ultimately spawned the direct contracting pilot program.

CMMI is currently headed by Elizabeth Fowler, who previously served as vice president of public policy and external affairs for WellPoint, Inc. — a health insurance giant that later became Anthem. Fowler also worked as chief health counsel to former Senate Finance Committee Chair Max Baucus, a right-wing Democrat who infamously had single-payer proponents arrested in 2009 and helped ensure that the ACA did not include a public option.

Weisbart told Common Dreams that while the creation of CMMI may have been well-intentioned, the body’s ability to “so fundamentally and radically transform a public health program that so many Americans rely on” without congressional approval or oversight is a real danger that lawmakers must take seriously.

“Someplace there needs to be congressional oversight,” Weisbart said. “When the public does finally find out that [lawmakers] were asleep at the switch, they’re not going to be happy. This is your chance to do what democracy is intended to do.”

The Biden administration paused the most extreme form of direct contracting — known as the Geographic (GEO) model — in March, but it is allowing the Global and Professional Direct Contracting (GPDC) pilot to move forward. According to CMS, the GPDC pilot is expected to play out over a six-year period.

While lawmakers have largely been quiet about the Medicare experiment, a handful of Democratic members of Congress have echoed grassroots demands for an immediate end to the program in recent months.

“We appreciate that you paused implementation of the Geographic model,” Reps. Lloyd Doggett (D-Texas.) Bill Pascrell (D-N.J.), Mark Pocan (D-Wis.), Katie Porter (D-California) wrote in a May letter to Becerra and then-Acting CMS Administrator Elizabeth Richter. “However, we remain worried that the 53 DCEs participating in the GPDC model, a policy launched under the Trump administration, lack oversight to protect Medicare beneficiaries’ care.”

“As members of Congress committed to protecting Medicare beneficiaries,” the lawmakers continued, “we ask that CMS immediately freeze the harmful CMMI DCE pilot program including the Geographic model and the Global and Professional Direct Contracting Model and evaluate the impact to beneficiaries.”

In September, Porter took part in a PNHP-hosted webinar that spotlighted the potentially far-reaching harms of the direct contracting pilot.

We're excited to welcome @RepKatiePorter as our featured speaker for tonight's webinar on Direct Contracting Entities.

Learn more about this latest threat to traditional Medicare, and what can be done to stop it.

“This program was supposed to make Medicare more efficient,” said Porter. “But actually it does just the opposite. Rather than allowing patients to go to providers directly under traditional Medicare, DCEs invite insurers and investors to step in and interfere with the care that Americans get.”

“This direct contracting entity model is just one more example of the Trump administration’s many attempts to wreck a functioning, successful, popular government program for the sake of lining the pockets of its corporate donors,” Porter added. “The bottom line for direct contracting entities is not to improve the quality of care. They drive up costs for patients to maximize their profits.”

In a column earlier this month, The Houston Chronicle‘s Chris Tomlinson argued that the Biden administration’s decision to allow the DC program to continue “reflects for-profit health companies and investors’ power over both political parties.”

“Direct contracting is also likely to kill any chance for progressive Democrats to make Medicare an option for any American who wants to enroll,” Tomlinson added. “If the government puts private companies in charge of all Medicare patients, it will eliminate any opportunity to overhaul our healthcare system truly.”

“Next year,” he added, “millions more Americans will find themselves in privatized Medicare, and most will never know what happened.”