U.N. Secretary-General Antonio Guterres bluntly criticized the final, non-binding communique of the Glasgow climate summit, saying, “We are still knocking on the door of climate catastrophe.”

Text of the Secretary General’s reaction to final communique of COP-26:

The approved texts are a compromise. They reflect the interests, the conditions, the contradictions and the state of political will in the world today.

They take important steps, but unfortunately the collective political will was not enough to overcome some deep contradictions.

As I said at the opening, we must accelerate action to keep the 1.5 degree goal alive.

Our fragile planet is hanging by a thread.

We are still knocking on the door of climate catastrophe.

It is time to go into emergency mode — or our chance of reaching net zero will itself be zero.

I reaffirm my conviction that we must end fossil fuels subsidies.

Put a price on carbon.

Build resilience of vulnerable communities against the here and now impacts of climate change.

And make good on the $100 billion climate finance commitment to support developing countries.

We did not achieve these goals at this conference. But we have some building blocks for progress.

And the texts today reaffirm resolve towards the 1.5 degree goal. Boost climate finance for adaptation. Recognize the need to strengthen support for vulnerable countries suffering from irreparable climate damage.

And for the first time they encourage International Financial Institutions to consider climate vulnerabilities in concessional financial and other forms of support, including Special Drawing Rights.

And finally close the Paris rule book with agreement on carbon markets and transparency.

These are welcome steps, but they are not enough. 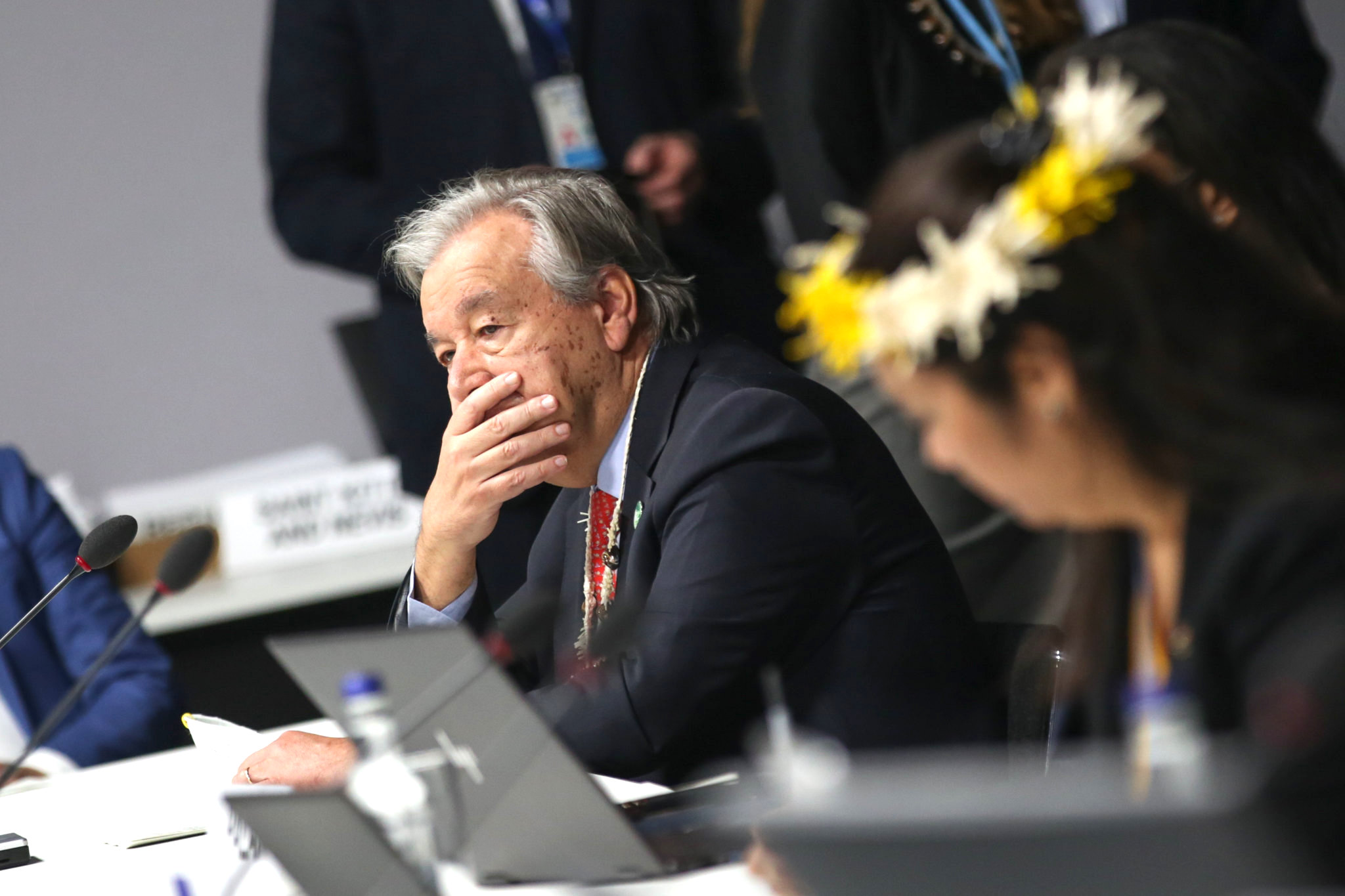 Guterres at the climate meeting in Glasgow, Nov. 12. (UNclimatechange, Flickr)

Science tells us that the absolute priority must be rapid, deep and sustained emissions reductions in this decade.

But the present set of Nationally Determined Contributions — even if fully implemented — will still increase emissions this decade on a pathway that will clearly lead us to well above 2 degrees by the end of the century compared to pre-industrial levels.

I welcome the agreement between US and China here in Glasgow that — like the text today — pledges to accelerate action to reduce emissions in the 2020s.

To help lower emissions in many other emerging economies, we need to build coalitions of support including developed countries, financial institutions, those with the technical know-how.

This is crucial to help each of those emerging countries speed the transition from coal and accelerate the greening of their economies.

The partnership with South Africa announced a few days ago is a model for doing just that.

I want to make a particular appeal for our future work in relation to adaptation and the issue of loss and damage.

Adaptation isn’t a technocratic issue, it is life or death.

I was once Prime Minister of my country. And I imagine myself today in the shoes of a leader from a vulnerable country.

COVID-19 vaccines are scarce. My economy is sinking. Debt is mounting. International resources for recovery are completely insufficient.

Meanwhile, although we contributed least to the climate crisis, we suffer most.

And when yet another hurricane devastates my country, the treasury is empty.

Protecting countries from climate disaster is not charity. It is solidarity and enlightened self-interest.

We have another climate crisis today. A climate of mistrust is enveloping our globe. Climate action can help rebuild trust and restore credibility.

That means finally delivering on the $100 billion climate finance commitment to developing countries.

It means measuring progress, updating climate plans every year and raising ambition. I will convene a global stock-taking summit at the heads of state level in 2023.

And it means – beyond the mechanisms already set out in the Paris Agreement – establishing clear standards to measure and analyze net zero commitments from non-state actors.

I will create a High-Level Expert Group with that objective.

Finally, I want to close with a message of hope and resolve to young people, indigenous communities, women leaders, all those leading the climate action army.

I know many of you are disappointed.

Success or failure is not an act of nature. It’s in our hands.

As the great Scottish writer Robert Louis Stevenson said: “Don’t judge each day by the harvest you reap, but by the seeds that you plant.”

We have many more seeds to plant along the path.

We won’t reach our destination in one day or one conference.

But I know we can get there.

We are in the fight of our lives.

I will be with you all the way.

← COP26: Biden Under Fire for ‘Failing to Act on Fossil Fuels’
26 Candles for Consortium News →