Jonathan Cook condemns Keir Starmer’s failure to make it clear that Israel is committing war crimes for which there should be harsh consequences. 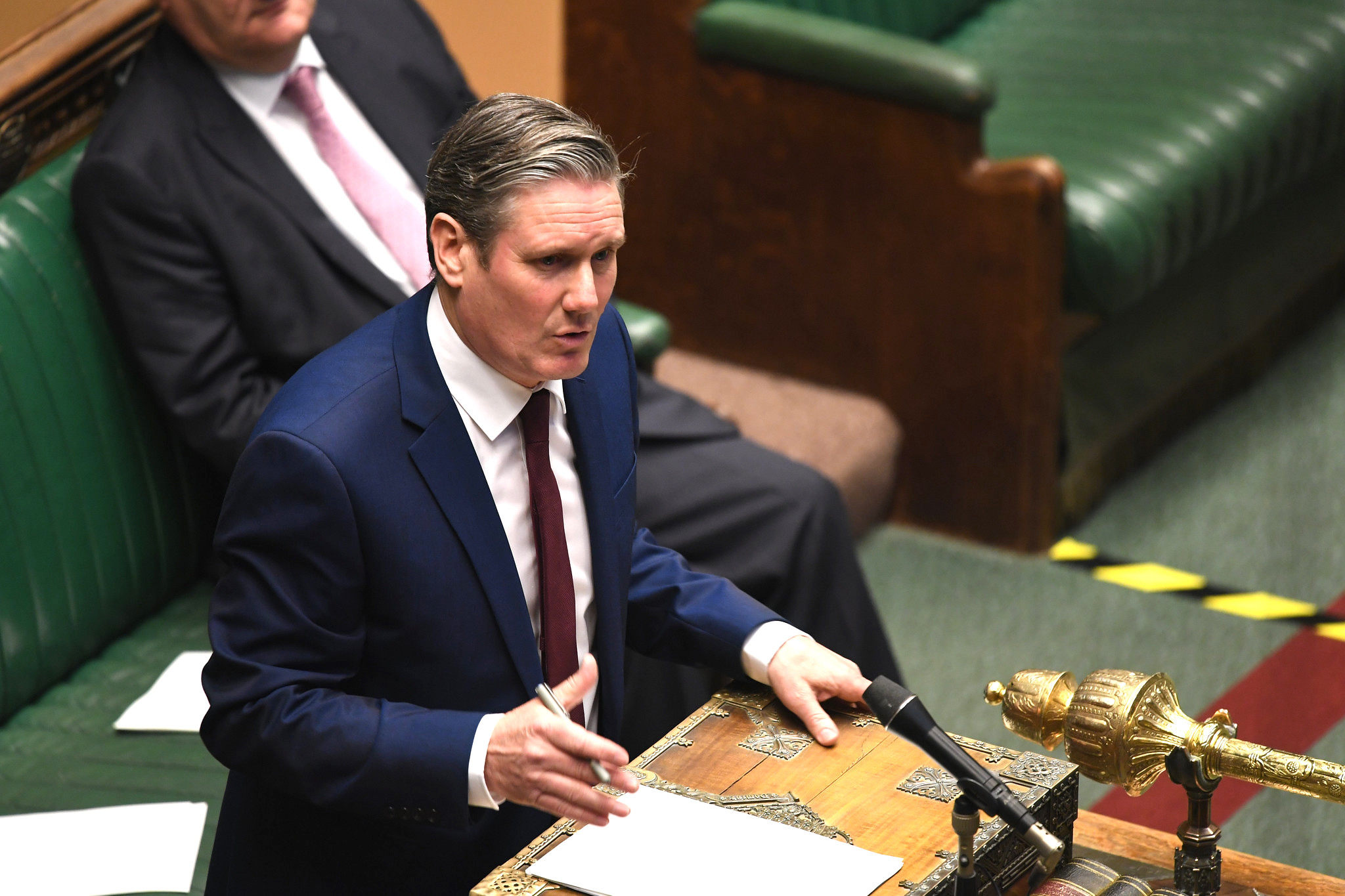 No one should be surprised that Britain’s rightwing prime minister, Boris Johnson, has had barely anything to say about Israel’s pummeling of Gaza, with nearly 200 Palestinians reported to have been killed by airstrikes and many hundreds more seriously wounded.

Nor should we be surprised that Johnson has had nothing to say about the fact that Israel is using British weapons to bombard Gaza, killing families and blowing up media centers.

How can British "enhanced military collaboration" with the IDF now be deemed legal? They just bombed Al Jazeera and AP's offices using the £500bn worth of arms Britain has sold them – with no conditions on use! #FreePalestine

Johnson has had nothing to say either about Israel’s recent efforts to ethnically cleanse Palestinians from occupied East Jerusalem — the very obvious trigger, along with its attacks on the al-Aqsa mosque, for this latest round of so-called clashes between Israel and Hamas.

And like most of his predecessors, Johnson has had remarkably little to say about the much longer-term ethnic cleansing of Palestinians that was always at the core of mainstream Zionism’s mission and was officially sponsored by Britain through its 1917 Balfour Declaration.

But if Johnson’s performance at this critically important moment has been predictably dismal, what about the leader of the opposition Labour Party, Sir Keir Starmer? Presumably he is picking up the slack, making clear that Israel is committing war crimes and that there must be harsh consequences, such as sanctions and an arms embargo.

Except Starmer is strangely quiet too.

Over the past week, Starmer has tweeted three times on matters related to events in Israel-Palestine. The first two were nearly a week ago, before Israel had begun unleashing the full might of its arsenal on Gaza. Starmer joined others in mealy-mouthed calls to “de-escalate tensions,” as though this was a slightly-too-noisy row between a bickering couple rather than serial wife-beating that has been going on for decades, aided by Britain.

The situation in Jerusalem, Gaza and Israel is shocking.

Labour is calling for the immediate end to air strikes and rocket attacks.

Britain must act to de-escalate tensions and kick-start efforts for a sustainable peace – through a two-state solution.https://t.co/hqi0l25I7S

As the death toll in Gaza has mounted, and the both-sidism favored by Western leaders is exposed ever more starkly as moral cowardice, Starmer has uttered not a word on the events unfolding in Israel and Palestine. Complete quiet.

That was until Sunday, when Starmer took time out from his day of rest to comment on a small convoy of cars — driven from Bradford and Oldham, according to a Jewish News report — that had passed through an area of London where many Jews live, waving Palestinian flags and shouting anti-Semitic curses.

Starmer commented: “Utterly disgusting. Antisemitism, misogyny and hate have no place on our streets or in our society. There must be consequences.”

Utterly disgusting. Antisemitism, misogyny and hate have no place on our streets or in our society. There must be consequences. https://t.co/a1asCAF9Ep

And sure enough, there were immediate consequences. The police arrested four people under hate-crime laws.

In referring to Bradford and Oldham, the Jewish News report was suggesting — probably correctly — that the occupants of the cars were drawn from the large Muslim populations that live in those cities.

This is a pattern we have seen before. When Israel starts attacking Palestinians, many of whom are Muslim and whose lands include important Islamic holy sites under constant threat from Israel, Muslims are likely to feel the pain and insult far more deeply and personally than most other British populations.

Their outrage is likely to peak when Israel desecrates a holy site under occupation such as al-Aqsa in Jerusalem — which is also a powerful symbol of the Palestinians’ aspiration towards political sovereignty in their historic homeland — during the holy month of Ramadan.

Many Muslims feel Israel’s reckless bombardment of Gaza and its civilian population, as well as the invasion of al-Aqsa mosque by Israeli soldiers, as very personal attacks on their dignity, their identity and their values.

“White” Britons struggling to understand such emotions might try to recall how incensed they felt at an attack by Islamic extremists on the Charlie Hebdo magazine in Paris back in 2015. That led to a march through the French capital by world leaders, including Israeli Prime Minister Benjamin Netanyahu, upholding free speech, most especially the right to offend Muslims’ religious sensitivities, as a supreme — and inviolable — value. (That is the same Paris that at the weekend used water cannon and baton charges against Palestinian solidarity activists, many of them Muslims, trying to exercise their free speech rights to denounce Israel’s attacks on Gaza.)

Many “white” Europeans felt the attack on Charlie Hebdo as a threat to Enlightenment values and as an assault on “Western civilization.” Similarly, many Muslims feel Israel’s attacks on Palestinians and on the sanctity of Islamic holy sites, largely indulged by Western politicians and the Western media, as no less grave a threat.

And just as it is common for many “white” Europeans — including Western politicians — to confuse Muslims and Islam with Islamic extremism, blaming a religion for the flaws of its more extreme adherents, so a portion of Muslims wrongly associate Jews in general with the crimes committed by Israel.

Israel does nothing to dispel this dangerous conflation. In fact, it actively encourages it. It declares itself the state of the entire Jewish people, disdaining the presence and rights of 1.8 million second-class Palestinian citizens. Or as Netanyahu observed two years ago, shortly after enshrining institutionalized racism in Israeli law, Israel is “the national state, not of all its citizens, but only of the Jewish people.” When Israel speaks and acts, its leaders claim, it speaks and acts on behalf of all Jews worldwide.

Some prominent Western Jews — including Guardian columnist Jonathan Freedland — add to the confusion. They appear to agree with Netanyahu by avowing that Israel is at the core of their identity and that attacks on Israel are an attack on who they are. This line of argument was widely weaponized against former Labour Leader Jeremy Corbyn, suggesting he was engaging in anti-Semitism, or at least indulging it, by being such a trenchant critic of Israel.

So, however wrong it was for the occupants of those cars at the weekend to be shouting anti-Semitic profanities, and however right it is for the police to be investigating this incident, it is not something difficult to explain. Manufactured confusion over the distinctions between Jews, Judaism, Israel and Zionism are as common as manufactured confusion over Muslims, Islam, various Islamic states and jihadism.

But there is a more important point to make that relates directly to Starmer — and most other Western politicians. He may claim the moral high ground in his public denunciations of the anti-Semitic curses from the convoy of cars in London at the weekend. But he must take a considerable chunk of the blame for them.

Given how precise Israel's missiles are, it would be interesting to hear Israel explain why it decided to make a huge crater in the main road leading to Gaza's biggest hospital, al-Shifa. Maybe one for the ICC to look into https://t.co/ICTU0fdK7k

Over the past week British politicians have mostly chosen to avert their gaze from the war crimes committed by Israel against Palestinians with Britain’s help — in the form of diplomatic silence, weapons sales and continuing trade agreements.

With Corbyn gone, no one in British politics now represents the rights of Palestinians — and by extension the rights of Britain’s large Muslim population, whose interests and dignity are trampled every time Israel’s army kills, wounds or demonizes Palestinians or desecrates Palestine’s holy places.

As Gaza is turned into rubble and whole families killed, keep reminding yourself – because the media sure won't – that this latest 'clash' began because Israel intensified the ethnic cleansing of Palestinians families from their homes in Jerusalem, against international law

In his studied silence about Israel’s bombing of Gaza — after Israel recklessly provoked Hamas rockets by intensifying the ethnic cleansing of Palestinian families in East Jerusalem to replace them with Jewish settlers — Starmer has sent a clear message to Britain’s Muslim communities, like those in Bradford and Oldham:

I do not represent you or your concerns. I support, as I stated during my campaign to become Labour leader, “Zionism without qualification.” Like the Palestinians, you are on your own. You are not part of the British debate.

It is not just that Britain’s Muslims have been abandoned by politicians like Starmer. Muslims understand that, when it comes to core issues of their identity and their dignity, they have no representation, no voice, in the U.K. in stark contrast to the treatment of Jewish communities that choose to support the belligerent, apartheid state of Israel.

Those Jews — unlike Britain’s anti-Zionist Jews — have Starmer’s full attention, his “support without qualification.” That was why Starmer was only too ready to insult every Muslim in Britain by cancelling at the last minute his attendance at a Ramadan supper last month, to break that day’s fast, at the behest of pro-Israel Jewish groups. The reason? One of the supper’s organizers had once spoken in favour of boycotting Israel’s settlements, in line with international law — a position one might have imagined a high-profile lawyer like Starmer would have appreciated rather than punished.

These actions have all too predictable consequences. They fuel alienation from British politics among many Muslims, and racism and extremism among a very small subsection of them — of exactly the kind we saw at the weekend in the convoy driving through London.

Denouncing the convoy’s participants as racist while pretending that there are no grounds for Muslims — or anyone else who cares about international law and human rights — to feel aggrieved by what is happening in Gaza, as Starmer has effectively done through his silence, is to pick further at an open wound. It is to claim an entirely unjustified “white” righteousness — like those two-faced world leaders who marched through Paris in 2015 — that serves only to deepen the offense and spread it.

In professing his blind support for Israel and Zionism — Israel’s ideology of Jewish supremacism, the counterpart of extreme political Islam — Starmer revealed himself to be an utter hypocrite and racist. One rule for ugly Muslim supremacism, another for ugly Israeli supremacism. One denounced, one placated.

Starmer is not seeking to “de-escalate” the “tensions” causing bloodshed thousands of miles away in the Middle East — and mostly, let’s note, among Palestinians. Rather, he is fuelling those very same tensions, escalating them, in his own back yard. He may not be shouting profanities at the top of his voice from his car window. He has no need to.

He can cause even more damage simply by loudly prosecuting verbal threats while quietly exonerating war crimes that cause mass death.