From the Archive: The attempted ethnic cleansing of Sheikh Jarrah, the storming of Islam’s third holiest site, a Hamas ultimatum ignored, and the renewed bombing of Gaza has brought to the fore Israeli leaders’ appalling notion of  “mowing the grass” as Elizabeth Murray recalls in this piece first published Nov. 16, 2012.

In early 2010, one of Washington DC’s most prestigious think tanks was holding a seminar on the Middle East which included a discussion of Israel’s December 2008-January 2009 assault on Gaza which killed about 1,300 Palestinians. When the death toll was mentioned, one expert on the panel smiled enigmatically and intoned: “It’s unfortunate, but every once in a while you have to mow the lawn.”

The remark, which likened killing hundreds of men, women and children, many of them noncombatants, with trimming the grass, was greeted with a light tittering around the room, filled with some of Washington’s most elite, highly educated and well-paid Middle East experts. Not a single one objected to the panelist’s black humor.

The cavalier language is symptomatic of the policymaking community’s increasingly pervasive tendency to disregard and disparage the humanity of Palestinian victims of Israeli attacks, often waged by Israel’s high-tech drones and U.S.-supplied F-16’s. There is also a tendency to ignore or downplay Israeli war crimes. On the contrary, several analysts and experts were grinning at the reference to Israel’s strategy of mounting periodic attacks on the Palestinians to cull each new generation of militants. Such is the nonchalance of Washington’s policy-advising cognoscenti toward the ongoing and systematic genocide of Gaza’s oppressed population.

This dangerously sociopathic attitude is prevalent whether cloaked in a cheap joke or reflected in the usual failure by the State Department spokesman to condemn or even acknowledge the criminality of Israel’s aerial and sea-based bombardment of Palestinian civilians.

After the 2012 attacks, the State Department justified Israel’s bombardment of Gaza as Israel’s “right to defend itself” against the launching of relatively primitive rockets, mostly by radical groups, from inside Gaza. Yet, while the State Department urged both sides to avoid civilian casualties, nowhere was there mention of the Palestinians’ right to defend themselves from various attacks by Israel. Apparently only one side is granted that privilege, according to the U.S.

The relegation of Palestinians to a less-than-human status by Israel and the United States, especially the inhabitants of Gaza who are perpetually locked into an open-air prison and subject to an Israeli blockade, was noted by MIT professor Noam Chomsky after a visit to Gaza to attend an academic conference. In comments broadcast by Democracy Now on Nov. 14, 2012, Chomsky remarked:

“It’s kind of amazing and inspiring to see people managing somehow to survive as essentially caged animals subject to constant, random, sadistic punishment only to humiliate them no pretext. They [the Palestinians] would like to have dignified lives, but the standard Israeli position is that they shouldn’t raise their heads.” 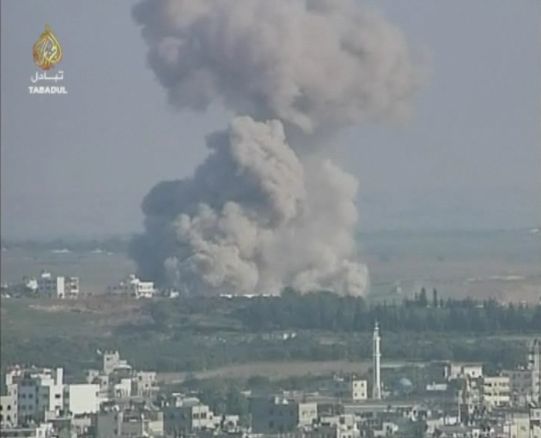 An Israeli strike caused a huge explosion in a residential area in Gaza during the Israeli assault on Gaza in 2008-2009. (Al Jazeera)

Instead of a serious effort to reach a peace acceptable to both sides, Israel seems to prefer a state of endless conflict with the Palestinians. After all, the prospect of peace might require the Israeli government to treat their neighbors as equals and withdraw from the West Bank, occupied since 1967, and to lift the Gaza blockade.

Rather than make meaningful concessions, some Israeli hardliners simply promote the idea of periodically “mowing the grass,” i.e. killing the latest generation of Palestinian militants who sprout up from the injustice all around them. Perhaps that is why Israel broke an informal ceasefire (during the 2012 offensive) by assassinating Hamas military commander Ahmed Jabari in an air strike.

Jabari was killed hours after he received the draft of a permanent truce agreement with Israel, which included mechanisms for maintaining the ceasefire, according to Israeli peace activist Gershon Baskin, who helped mediate talks between Israel and Hamas for the release of Israeli soldier Gilad Shalit.

Jabari was a key Palestinian interlocutor in the release of Shalit, and an important intermediary for truce negotiations with groups such as the PFLP and Islamic Jihad. Such a relatively moderate figure may have been perceived as a threat to Israeli leaders who prefer to portray Hamas as rejectionist toward any peace.

These developments and the U.S. response to them are a chilling omen for those who had hoped for a change in U.S. Middle East policy after the 2012 U.S. presidential election namely, increased pressure on Israel to halt its cruel oppression of Palestinians and obey international law.

There was still a window of opportunity for the U.S. to shift its approach before the violence spiraled out of control. One could have hoped that then President Barack Obama might rein in Israeli Prime Minister Benjamin Netanyahu. Instead Obama’s eerie and reprehensible silence during the Israeli assault on Gaza in December 2008-January 2009 has been repeated by President Donald Trump in the massacres at the Gaza fence last week.

38 comments for “Likening Palestinians to Blades of Grass”