Bernie Madoff, who ran the biggest ponzi scheme ever known, died in prison on Wednesday at age 82.  We republish here an interview with Madoff’s messenger by CN Editor Joe Lauria and written in 2009 for The Sunday Times.

William Nasi grew accustomed to Bernard Madoff’s peculiarities. As his personal messenger, he saw the master fraudster two to three times a day for more than 20 years.

One of Madoff’s obsessions was cleanliness. “I would open the office at 7.30 am and sometimes I would see Bernie in there, vacuuming the floors, personally,” said Nasi. “He was a workaholic and a cleano-phobe. Everything had to be clean, even if he had to do it himself.”

Ten days ago a New York court convicted Madoff of one of the biggest-ever financial frauds. He confessed to operating a Ponzi scheme, where money from new investors is used to pay old investors who want to cash in and leave the fund. While investigators try to piece together the size of the losses, which could be $65 billion (£45 billion), Madoff is likely to spend the rest of his life in jail.

On Friday an American appeal court denied his lawyers’ request that he be allowed to return home before his sentencing on June 16.

Nasi, one of the few former Madoff employees who has spoken publicly, said that only now, with the benefit of hindsight, did he think anything had been wrong with the firm.

It struck him as odd, he said, that Madoff had never in 25 years asked for receipts for his deliveries of important financial documents. “On Wall Street the whole thing is based on signed receipts,” said 60-year-old Nasi.

Unless, of course, you are doing business Madoff-style. The one thing that might have tipped him off was the sole exception to Madoff’s no-receipts rule. “The only time I asked for receipts was when Bernie sent me to the SEC [Securities and Exchange Commission, the Wall Street watchdog]. Every time I delivered a report there, he wanted a receipt.” 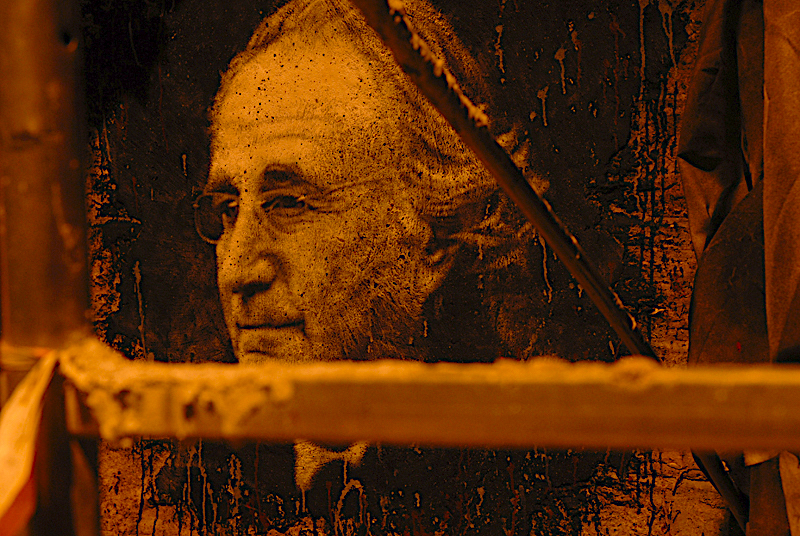 Whenever the SEC visited the office, which Nasi saw grow from four closet-like rooms on Broadway near Wall Street to three floors in mid-town Manhattan, Madoff panicked. “An army would come in. I’d see them scrutinising everything,” said Nasi. “Bernie would have a fit. You had to be jumping. He drove everybody crazy. For 20 years it was like this. Everyone had to have his nose to the grindstone.”

Staff were surprised that Madoff’s office Christmas party, held every year on December 17, was last year brought forward to December 10. Madoff was normally the life of the party, but this time he was distant. “[His wife] Ruth was carrying the crowd,” said Nasi, who used to build the bonfire at Madoff’s summer parties in chic Montauk on Long Island. “She was charming and witty.

“Little did we know that just hours after the party ended Bernie would be getting a knock on his apartment door by the FBI at 7.30 in the morning,” said Nasi.

The messenger first worked for Madoff from 1968 to 1974 when the office was at 39 Broadway. Nasi then left to attend university. Twelve years later, while working as a clerk in a shop in New York’s Times Square, an Albanian weightlifter had an argument with the shop owner.

“He took a swing and hit me instead,” said Nasi. His retina detached. It was repaired with surgery, but seven months later it detached again. In 1989 Nasi was declared legally blind.

Worried that he couldn’t find work, Nasi said he “went back to visit my old pals at Madoff, whom I hadn’t seen for 15 years”.

Peter Madoff, Bernie’s brother, “was excited to see me and said, ‘We’ll make you a job that even with an inability to read you will be able to do. Go down the hall to see Bernie and say hello.’ I was there another 19 years.” Nasi thought the company would be protected from evil because the Madoffs were good enough to create a job for a blind former employee.

Madoff treated him well. “It was the most work-friendly environment, a family environment. It was nonstress,” said Nasi. “Everyone should be as lucky as I was to work in a happy work environment like that.”

Madoff had a habit of coming over to his desk to ask if everything was okay, to see whether he had any complaints. “If I ever had any problem there was no need to go to the office manager,” said Nasi. “I would go to Bernie or, if Bernie was busy, I would go straight to Ruth.”

When Nasi’s father died, Bernie sent two company cars with management people to the funeral. They took care of him at bonus time too. He would get the usual $2,500 at Christmas and $5,000 at Easter. “And I was the low man on the totem pole,” he said.

However, Nasi also saw another side of Bernie Madoff. One morning he came in early and started toward Madoff’s door. It was open. Before he was seen, Nasi heard Madoff’s voice booming at his brother Peter. “‘Until your name is on that door you keep your f****** mouth shut,'” he heard. ‘You only own 1% of the business, so keep quiet.'” Nasi said: “I was so embarrassed I just kind of backed up, got to the elevator and went downstairs to cool off for about five minutes.”

Another time Madoff wanted to show off how feared he was by his employees. “Bernie told me to take a clipboard and follow him. He said he would do the talking and I was to pretend to take notes,” said Nasi.

“As we were walking by you could just see people starting to fidget and sweat heavily.” Madoff had a laugh over that.

It wasn’t long before Nasi understood what drove Bernie Madoff. “Money,” said Nasi. “That activated his neurological circuits to the highest. That lit his brain up.

“His mission was to keep the company going at all costs. And strangers became collateral damage,” said Nasi. “He killed the company that he loved best.”

The day after Madoff was arrested, Nasi went back to the office for the last time. “I took a duffle bag of junk that I had collected over many years,” he said. “When I walked out of that lobby on the afternoon of December 12 I was crying like a baby. I kept telling myself, ‘You’ve got to be tough as nails’. And I’m crying. I’ll probably never come back here again.”

Since then Nasi has thought back on his relationship with Bernie’s father, Ralph, and on one conversation in particular.

Ralph Madoff began life as a plumber before getting involved in finance with Bernie’s mother in the 1950s. According to Nasi, Ralph, whom he nicknamed Zorro, “considered himself a plumber wearing a pin-striped suit”.

Ralph and Nasi would ride together uptown a couple of days a week. “One day he gave me his Ten Commandments rolled into one,” said Nasi.

“He told me, ‘Never, ever, ever invest on Wall Street. It is run by crooks, and SOBs [sons of bitches]. I don’t trust them. Put your own money in a savings bank and you control it yourself. A dollar is worth a dollar. Don’t let greed get into your psyche.'”

Brokerage ‘was just a front’

MADOFF’s brokerage business, which the fraudster claims was legitimate and successful, was simply a money-losing front for the Ponzi scheme, another former employee believes.

The employee, who has given a long interview to The Daily Beast website but has not been named, was a computer programmer in the Madoff operation. He said the business was a “shambles” and “excessively staffed with grossly overpaid people”.

The managers were paid $500,000 to $700,000 but knew nothing about computerised trading. “They mostly socialised, read the news. They would have been unemployable on the outside.”

The employee believes the fraudulent trading statements sent to investors from the 17th floor were compiled manually and put together on obsolete computer systems.

Madoff insisted staff should not retain e-mails but print them out and delete them, the employee said.

“Nobody left because they could never get another job that paid as well as this one. Nobody asked any questions because the Madoffs were nice, protective, generous,” he said.

5 comments for “Life Inside the Weird World of Bernie Madoff, Who Died on Wednesday”