The social media company says it carefully reviewed the content of the banned CN Live! episode; says it won’t be restored and that a strike will remain against CN—an impossible decision if the entire video was indeed carefully reviewed. 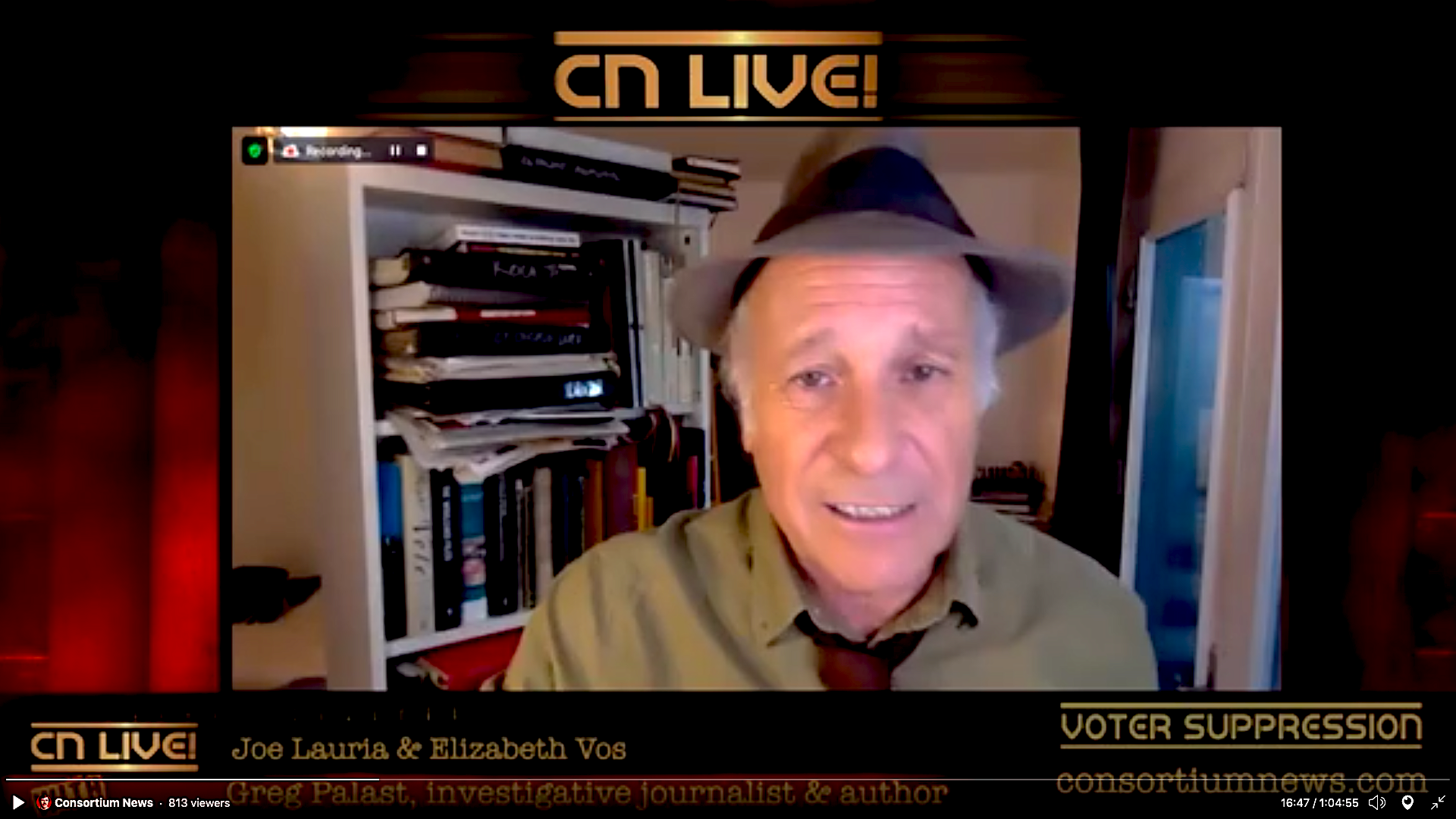 A screenshot of Greg Palast speaking on the CN Live! episode banned by YouTube.

YouTube has rejected an appeal by Consortium News, has refused to restore an episode of CN Live! it banned and will maintain a week-long suspension and a strike against CN’s YouTube channel. With three strikes, CN Live! could have its channel, with hundreds of videos, deleted.

YouTube’s statement that it “carefully” “reviewed” the episode is patently untrue. A careful review of the episode, which aired on Jan. 14, would have clearly demonstrated that the program was about voter suppression in the Jan. 5 Senate runoff elections in Georgia. It begins with a clip showing Trump supporters claiming voter fraud in the November election but after 1m19s goes on to refute that claim, reporting instead that voter suppression by Republicans had taken place in Georgia.

It is literally impossible that anyone at YouTube could have watched even ten minutes of the video and come to their conclusion. The YouTube-banned episode can be watched in its entirety here on Twitter:

Content that advances false claims that widespread fraud, errors, or glitches changed the outcome of the U.S. 2020 presidential election is not allowed on YouTube.”

It appears that just reporting on claims that the 2020 election was stolen, without supporting those claims, is enough for either a YouTube algorithm or human reviewer to banish a video

Media outlets, including The New York Times, CNN and other mainstream media, when reporting on the 2020 election mention or show video of Donald Trump and his supporters making their claim of a stolen election before saying that the claim is untrue.  In this story just four days ago, CNN showed a video clip of Trump saying the election was stolen.  The report quoted Justice Clarence Thomas saying election fraud is real.

CNN and numerous television outlets repeatedly aired parts of Trump’s Jan. 6 speech in which he claimed the election was stolen.  This is precisely the kind of reporting CN engaged in for about one minute of an hour-long program.

Consortium News‘ CN Live!  had been planning a debate between a supporter and detractor of the claim that the election was stolen. Clearly that would bring a second strike against Consortium News.

It is a particular affront to imply that Consortium News has made YouTube an unsafe place for its viewers.  YouTube should clearly not be engaged in censoring news reports on behalf of a U.S. political party, which now controls both houses of Congress and the White House.  With this incident YouTube has clearly shown it is incompetent to carry out the task it should not have been given in the first place.

← LETTER FROM INDIA: Judge Stands Up to Narendra Modi
US Bombs Syria & Ridiculously Claims Self Defense →