Judge rules: “An aware and assertive citizenry, in contradistinction with an indifferent or docile citizenry, is indisputably a sign of a healthy and vibrant democracy,” writes Betwa Sharma.

In the week that the United States rejoined the Paris Agreement, India arrested a 22-year-old climate change activist after she had worked on a campaign to raise awareness about the months-long farmers’ protest led by Sikh farmers from Punjab against three farm laws.

Disha Ravi, who shared a manual on mobilising — the “toolkit” — with Greta Thunberg, was accused of trying to foment unrest in India, and spent six days behind bars before she was dramatically granted bail by a judge in Delhi who defied the police and the central government.

While the 18-page bail order of a district court does not affect the law of the land, given that only the High Courts and the Supreme Court lay down precedent for states and the country respectively, it is music to the ears of civil libertarians at a time when the Hindu nationalists in power routinely crush dissent and accuse dissenters of being part of some “larger conspiracy.”

In brief, the Delhi Police, which reports to Prime Minister Narendra Modi’s central government, accused Ravi of working with the Canada-based Poetic Justice Foundation (PFJ), a group police claim advocates that Punjab should be a separate homeland for the Sikhs called Khalistan. The group’s “toolkit” was aimed at spreading “disaffection” against the Government of India, the government claims, and was responsible for the violent turn that a peaceful farmers’ rally took last month on Jan. 26. The police accused Ravi of a seditious act to “defame India.”

Judge Dharmender Rana’s order, which borrows generously from the Supreme Court’s interpretation of Article 19 of the Indian Constitution on the fundamental right of free speech, also challenged the police version of events — something one rarely sees at a bail hearing.

Judge Rana, citing the Supreme Court judgment Kedar Nath v. State of Bihar, said only activities that cause or may cause public disorder and disturb the peace are deemed seditious. In response to the allegation that Ravi was in touch with the Canadian PJF, Rana said PJF was not a banned organisation, there was no criminal case against the people running it, and that interacting with people with dubious credentials is not punishable.

“As long as the engagement/interaction remains within the four corners of the law, people interacting with such persons, ignorantly, innocently, or for that matter, even fully conscious of their dubious credentials cannot be painted with the same hue,” he wrote. 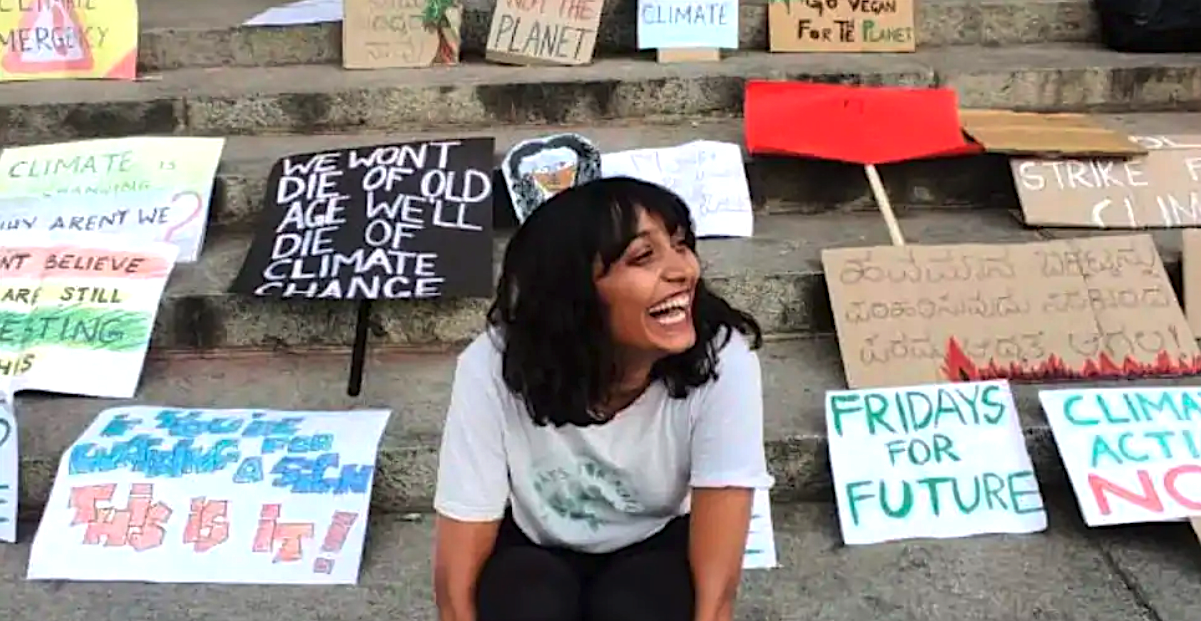 Rana said by the prosecution’s own admission there was nothing linking either Ravi or PJF to the violence on Jan. 26. The police cannot resort to “surmised or conjectures” to claim that she planned or supported the violence just because she shared a platform with people who opposed the farm laws, the judge said.

“There is not even an iota of evidence brought to my notice connecting the perpetrators of the violence on 26.01.2021 with the said PJF or the applicant/accused,” he wrote.

Rana studied a section called “prior action” in the “toolkit” manual, with suggested activities like tweetstorms, sharing solidarity videos, calling and emailing government representatives, signing petitions, and gathering near Indian embassies, and said, “the perusal of the ‘toolkit’ reveals that any call for any kind of violence is conspicuously absent.”

“In my considered opinion, citizens are conscious keepers of the government in any democratic nation. They cannot be put behind bars simply because they choose to disagree with state policies,” he wrote.

“The offense of sedition cannot be invoked to minister to the wounded vanity of the governments. Difference of opinion, disagreement, divergence, dissent, or for that matter, even disapprobation, are recognised legitimate tools to infuse objectivity in state policies. An aware and assertive citizenry, in contradistinction with an indifferent or docile citizenry, is indisputably a sign of a healthy and vibrant democracy.”

Crucially, in light of how frequently the Modi government declares any dissent part of a “global conspiracy,” Rana said the right to dissent was a fundamental right guaranteed under the Indian Constitution, and the freedom of speech and expression includes seeking a global audience.

“There are no geographical barriers on communication,” he said.

Rana found “absolutely nothing objectionable” in the manual linking to a website calling for people to stand up against India’s failing democracy being brought about “at the behest of fascistic ruling party, RSS-BJP.” BJP refers to Modi’s Bharatiya Janata Party (BJP), and the RSS is the Rashtriya Swayamsevak Sangh (RSS), its ideological parent which sees India as a Hindu state, not a secular democracy.

About a second linked site, Genocide.org, which lists human rights violations of 40 different countries including India, Rana said the while he found the imputations highly objectionable, there was nothing seditious about them.

“The imputations may be false, exaggerated or even with a mischievous intent but the same cannot be stigmatised as being seditious unless they have a tendency to foment violence,” he wrote.

Rana said there was no evidence to suggest that Ravi subscribed to any secessionist ideas, and forwarding the “toolkit” to Thunberg did not mean that she gave a global audience to “secessionist elements.”

“In my considered opinion creation of a WhatsApp group or being editor of an innocuous toolkit is not an offence,” Rana wrote. “I am conscious of the fact that it is very difficult to collect evidence for the offence of conspiracy but I’m equally conscious of the fact that what is difficult to prove for the prosecution in the affirmative is virtually impossible for the defense to prove in the negative.” 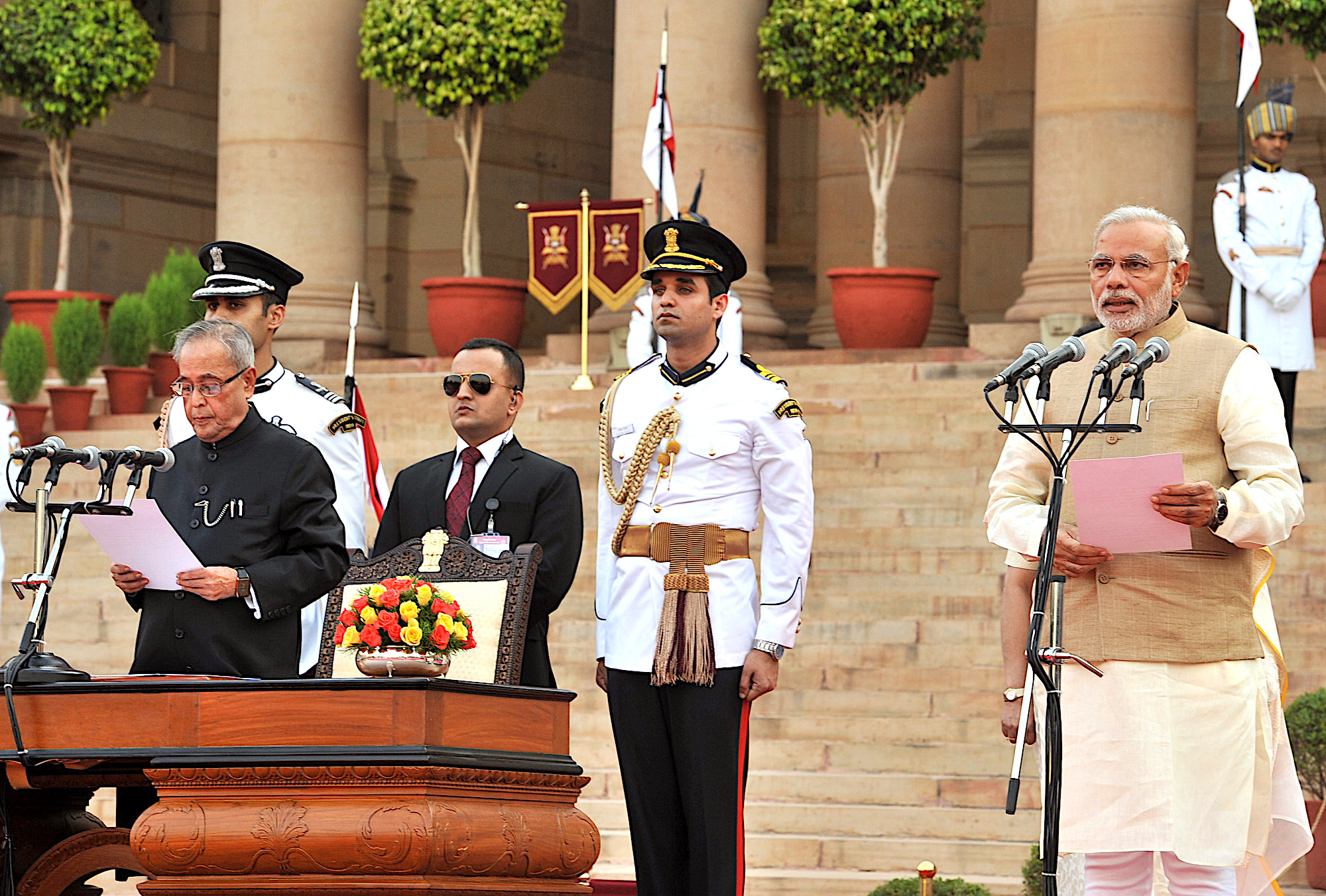 Narendra Modi takes the oath of office as prime minister of India in New Delhi on May 26, 2014.
(Prime Minister’s Office, Government of India, Wikimedia Commons)

A study showed that 96 percent of sedition cases filed against 405 Indians for criticising politicians and governments over the last decade were registered after Modi led the BJP to power in 2014. Of the cases studied, 149 were accusations of “critical” or “derogatory” remarks against Modi, and 144 against Yogi Adityanath, chief minister of Uttar Pradesh, India’s largest state with 200 million people, and founder of Hindu Yuva Vahini, a Hindu Nationalist organisation.

Little wonder then that the bail order of the district court has meant a great deal to civil libertarians, even if it makes little difference to the law. However, legal scholars like Professor Faizan Mustafa, a constitutional law expert and vice-chancellor of NALSAR University of Law in Hyderabad, find it too long and expansive for a bail order.

“It’s a significant victory but its impact will be minimum,” Mustafa said in a telephone interview. “The Supreme Court has said that bail orders should be ideally short. If you say things that will have some impact on the final adjudication of the matter then that is not right.”

Given that Ravi’s co-accused, Mumbai-based advocate Nikita Jacob and activist Shantanu Muluk, had already been granted transit anticipatory bail before the police could arrest them, it was fairly certain that Ravi would get bail.

Judge Rana only had to say two things before granting bail, according to Mustafa. First, by the prosecution’s own admission, there was no direct link between Ravi and the Jan. 26 violence. Second, there was no reason to keep her in custody.

“Do you have any evidence connecting her to the violence? The prosecution conceded they do not and the matter ends there,” said Mustafa. “The order could have been just one line. In view of interrogation already done there is no further need of custodial interrogation of Disha Ravi and therefore bail is granted.”

Rana relied on Supreme Court judgments while expounding on the fundamental right of free speech and expression, but Mustafa pointed out that the new ground is covered in the bail order, making it explicit that Article 19 of the Constitution does not talk of any territorial limits and therefore free speech extends to a global audience.

“That has not been explicitly said so far. But it is very much there in the law. Freedom of speech and expression does not have any territorial limits,” said Mustafa. “What was already implicit has been made explicit by him.”

Three years ago, when speaking on the challenges facing civilisation at the World Economic Forum at Davos, Prime Minister Modi said, “The other present-day serious aspect known which I want to draw your attention is that of educated and accomplished youth being radicalised and engaging in terrorism.”

Ravi, who is educated, accomplished and public-minded, is safe thanks to Judge Rana. But Nodeep Kaur, a trade unionist from India’s most oppressed Dalit community, was arrested on Jan. 12 after she joined a protest outside a glass factory in the outskirts of Delhi. She has alleged that she was tortured in custody by the Haryana Police and never got the same attention from the media or the public.

The mostly Muslims students and activists who led the protests against the Citizenship Amendment Act 2019—a law that makes religion the basis of granting Indian citizenship—and were subsequently blamed for the religious violence last February, are barely remembered by the national media and the public, even as they languish in jail. Of the 53 people killed in the communal violence, 40 were Muslim.

In Ravi’s case, the Modi government has seemingly scored an embarrassing self goal. But millions of young Indians engaged in any kind of activism will look at what was done to Ravi and think twice before being public minded. Indian parents, who as a rule would rather their children be safe than sorry, will have a ready reason to discourage more idealistic pursuits.

Despite Rana’s defiant bail order, the damage has been done.