Millions of people are endangered by the Lone Star state’s isolated and underregulated electric grid. 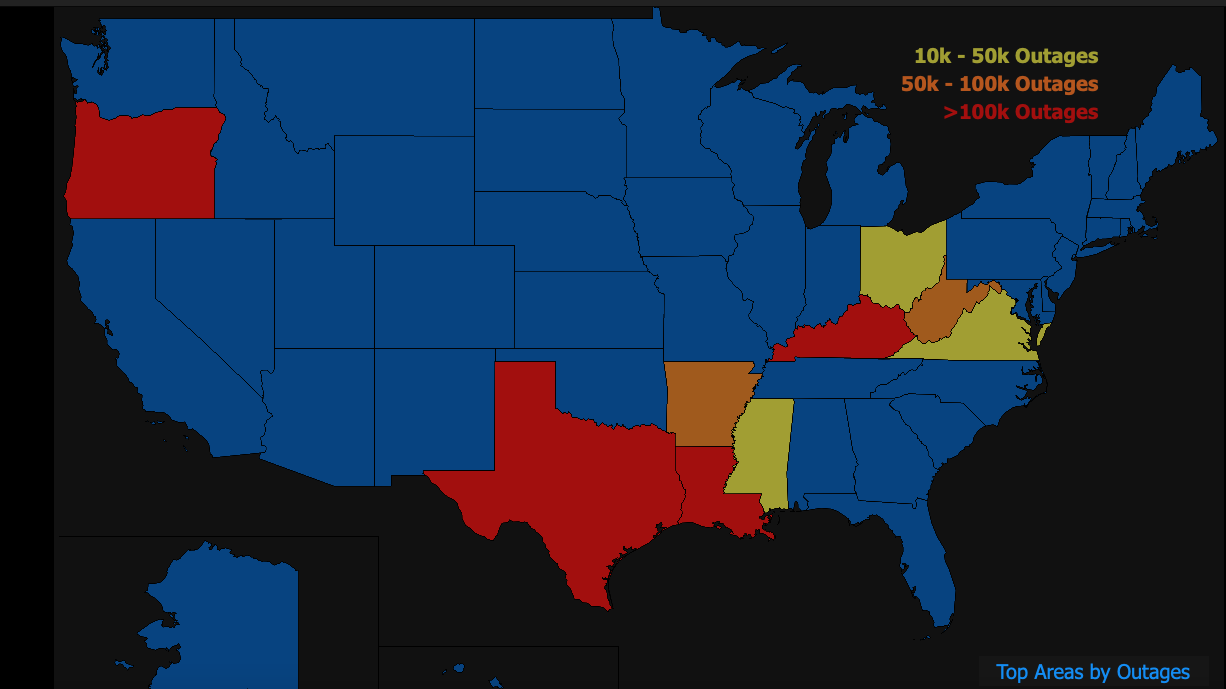 Much of the United States is currently engulfed in a deadly winter storm on top of the ongoing coronavirus pandemic, but the negative public health effects of this convergence may be most severe in Texas, where millions of people are endangered by a lack of heat amid sub-zero temperatures and thousands of vaccine doses nearly expired in thawing freezers after the Lone Star state’s isolated and underregulated electric grid was hit with widespread power outages.

As journalist Emily Atkin explained Tuesday, the jet stream “bringing frigid and dangerous Artic weather to millions of Americans” is, like other forms of extreme weather, related to global warming. That’s because, as Kevin Trenberth, a climate scientist at the National Center for Atmospheric Research, told Atkin several years ago, “all weather events are affected by climate change because the environment in which they occur is warmer and moister than it used to be.”

What’s made Winter Storm Uri especially fatal in Texas is not only the arrival of an unprecedented cold spell, but the way the weather event is occurring in the context of preexisting social injustices like homelessness as well as how it is interacting with the state’s underdeveloped infrastructure, inadequate planning and regulation, and lack of emergency preparedness.

Writing for Discourse Blog Tuesday, Samantha Grasso argued that “occasionally, something will happen in Texas to remind the people who live here that we live in a failed state.”

Grasso explained how freezing temperatures cascaded into power outages causing millions to go without heat and water in the midst of a winter storm and pandemic:

“While people began losing power Thursday, statewide outages spiked early Monday morning, after the Electric Reliability Council of Texas (ERCOT), the entity that controls the power grid for almost the entire state, announced a ‘rolling blackout,’ estimating outages around 40 minutes long in order to keep the grid from being overwhelmed. (The ERCOT, for what it’s worth, was borne out of Texas’ brainless reflex to buck federal regulation.) But by that time, it was likely too late, for a variety of reasons. Forty minutes turned into hours, and then days, with no real sign of when things will get better. After the power went out, so did the water, with several cities issuing boil water notices, or asking residents not to drip their faucets despite their pipes freezing, or even shutting off the water.”

As Grasso noted, “It would be an understatement to say that ERCOT was unprepared for a cold weather crisis of this scale.”

The rest of the lower 48 states use two electric grids: the Eastern Interconnect and the Western Interconnect. By contrast, in Texas, 90 percent of the state’s residents rely on ERCOT. As Kate Galbraith reported Monday in the Texas Tribune, the Lone Star state sought independence from the national grids to avoid federal regulations.

Texas hates the federal government so much it has its own outdated power grid. No other state in the country has been quite this stubborn, stupid and self-destructive about energy policy. This crisis is brought to you by deregulation. pic.twitter.com/ybeYzd73V8

While Republican lawmakers and right-wing media figures have used the crisis in Texas as an opportunity to attack renewable energy for its alleged unreliability, The Daily Poster reported Tuesday that ERCOT attributed the blackouts to “a shortage of natural gas due to a drop in pressure and frozen instruments at fossil fuel and nuclear facilities.”

“The fact that Texas deregulated its power grid in the 1990s could also be part of the problem,” The Daily Poster added. “Electricity market incentives are currently structured in such a way that Texas’ power companies receive more money if they don’t weatherize all their plants and shut down some of them during cold weather.”

To make clear. GOPrs like @JohnCornyn have been using freezing of TX wind turbines to attack renewables as Texans die from no power/heat. Our turbines froze ONLY because GOP let energy companies cut costs (& raise profits) by rejecting dem demands for turbine winterizing systems. pic.twitter.com/O7tn4CsrM3

Notably, the parts of Texas that are connected to the two national grids have not been devastated by power outages. In El Paso, for instance, “about 3,000 customers had power outages lasting five minutes or less when the winter storm moved in on Sunday,” a local ABC affiliate reported. “As of Monday afternoon, only 12 customers were impacted.”

To make clear. GOPrs like @JohnCornyn have been using freezing of TX wind turbines to attack renewables as Texans die from no power/heat. Our turbines froze ONLY because GOP let energy companies cut costs (& raise profits) by rejecting dem demands for turbine winterizing systems. pic.twitter.com/O7tn4CsrM3

Occurring as they did in the midst of a pandemic, the widespread power outages in Texas threatened to squander thousands of doses of the Moderna vaccine, which must be kept between -13°F and 5°F. As the Houston Chronicle reported Monday night, public health officials in Harris County “hustled to distribute thousands of doses” after the storage facility lost power and “its backup generator failed.”

NBC News reported Tuesday that “of the 8,430 vaccines, county health officials distributed 5,410 doses to five locations, including 3,000 to the Harris County Jail, 1,000 to Houston Methodist Hospital, 810 to Rice University, and 600 to Lyndon B. Johnson Hospital and Ben Taub Hospital.”

“The remaining doses were salvaged,” the news outlet added, “after Moderna advised county officials that the rest could be refrigerated and used for patients later that same day.”

Meanwhile, mutual aid and political action groups were scrambling to provide resources and shelter to people “who were facing below-freezing temperatures without robust city assistance,” Grasso wrote. “Though cities opened warming centers and shelters, facilities quickly reached capacity and weren’t safe to travel to in the harsh weather conditions.”

Also, @StopSweepsATX has been pressing on the city for weeks to better prepare for a deep freeze. https://t.co/UHLutXd04Q

Reflecting on Covid-19, Grasso said that “Texas, just like the rest of the country, killed so many people because our leaders thought it more important to prioritize short-term gains than invest in people for a long-term gain.”

“And through this mismanaged crisis,” she added, “it will kill others, too.”

By Tuesday night, at least 23 people had died nationwide, the majority in Texas, as a result of Winter Storm Uri, according to the The New York Times.

← Why the British Abandoned Impeachment
Taxes on the Rich: One-Sixth of What They Used to Be →