Its decline coincided with the rise of another, more effective process by which high officials could be held accountable, writes Eliga Gould.

Impeachment was developed in medieval England as a way to discipline the king’s ministers and other high officials. The framers of the U.S. Constitution took that idea and applied it to presidents, judges and other federal leaders.

That tool was in use, and in question, during the second impeachment trial of Donald Trump. Republicans raised questions about both the constitutionality and the overall purpose of impeachment proceedings against a person who no longer holds office.

Democrats responded that the framers expected impeachment to be available as a way to deliver consequences to a former official, and that refusing to convict Trump could open the door to future presidential abuses of power.

An impeachment case that was active in Britain while the framers were writing the Constitution in Philadelphia helped inform the new American government structure. But the outcome of that case – and that of another impeachment trial a decade later – signaled the end of impeachment’s usefulness in Britain, though the British system of government offered another way to hold officials accountable.

During the 17th century, the English Parliament used impeachment repeatedly against the royal favorites of King Charles I. One, Thomas Wentworth, Earl of Strafford, went to the gallows in 1641 for subverting the laws and attempting to raise an Irish army to subdue the king’s opponents in England. Although kings couldn’t be impeached, Parliament eventually tried King Charles I for treason too, sentencing him to death by public beheading on Jan. 30, 1649.

A century later, impeachment no longer carried a risk of execution, but in 1786 the House of Commons launched what would become the most famous – and longest – impeachment trial in British history.

The lower house of Parliament, the House of Commons, impeached Warren Hastings, who had retired as governor-general of British India and was back in England, for corruption and mismanagement. That action provides a direct answer to one current legal question: The charges were based on what Hastings had done in India, making clear that a former official could be impeached and tried, even though he was no longer in office.

Future U.S. President John Adams, who was in London at the time, predicted in a letter to fellow founder John Jay that although Hastings deserved to be convicted, the proceedings would likely end with his acquittal. Nevertheless, Adams and Jay were among those who supported the new U.S. Constitution, whose drafters in 1787 included impeachment, even though that method of accountability was close to disappearing from Britain.

Nearing the End of Its Usefulness

The trial of Hastings, in Parliament’s upper house, the House of Lords, didn’t actually begin until 1788, and took seven years to conclude. The prosecution included Edmund Burke, one of the most gifted orators of the age. Eventually, though, the House of Lords proved Adams right, acquitting Hastings in 1795.

This stunning loss could have been the death knell for impeachment in Great Britain, but Hastings was not the last British political figure to be impeached. That dubious honor goes to Henry Dundas, Lord Melville, Scottish first lord of the admiralty, who was charged in 1806 with misappropriating public money. Dundas was widely assumed to be guilty, but, as with Hastings, the House of Lords voted to acquit.

These examples showed that impeachment, even when the accused government official had done the things that he was accused of doing, was a blunt, cumbersome weapon. With both Hastings and Dundas, the House of Commons was willing to act, but the House of Lords – which was (and is) not an elected body and therefore less responsive to popular opinion – refused to go along. As a tool for checking the actions of ministers and other political appointees, impeachment no longer worked, and it fell out of use.

The decline of impeachment in Britain coincided with the rise of another, more effective process by which high officials there could be held accountable.

British prime ministers answer to Parliament, doing so literally during the now-weekly question time in the House of Commons. Leaders who for whatever reason lose the support of a simple majority in the lower house, including through a vote of no confidence, can be forced to resign. The last time a British prime minister lost a vote of no confidence was in 1979, when the minority Labour government of James Callaghan was defeated. 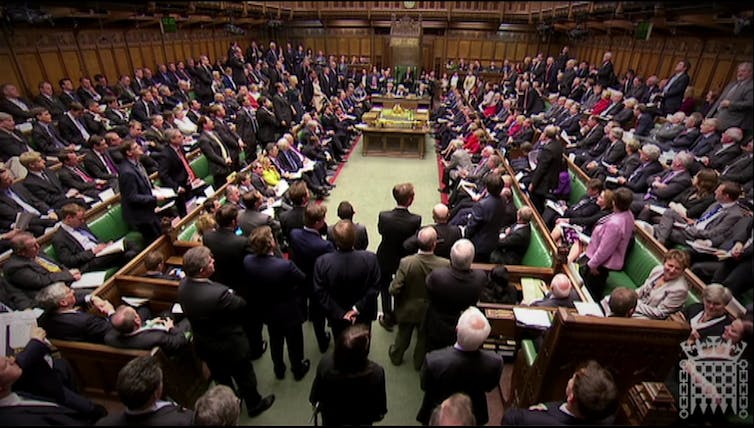 If a prime minister receives a vote of no confidence, there is an alternative to resignation: call an election for a new Parliament, which is what Callaghan did, and let the people decide whether the current government gets to stay or has to go. If the prime minister’s party loses, he or she is generally out, and the leader of the party with the new majority takes over. In 1979, the defeat of Callaghan and the Labour Party paved the way for the Conservative government of Margaret Thatcher, Britain’s first female prime minister.

This provides an immediate course of action for those who oppose a British government for any reason, including allegations of official wrongdoing, and delivers a rapid decision.

In the United States, by contrast, a president can be accused of corruption or even sedition but face no real consequences, so long as one more than a third of the Senate declines to convict.

Now that Trump has been acquitted, then the Constitution’s bulwark against presidential malfeasance could become yet another mechanism of minority government.

If impeachment is rendered useless in the U.S., as it was in Britain two centuries ago, the Constitution does offer another remedy: Section 3 of the 14th Amendment.

Originally intended to prevent former Confederates from returning to power after the Civil War, Section 3 bars people who have “engaged in insurrection or rebellion” against the U.S. from serving in state or federal governments, including in Congress or as president or vice president.

The language in the amendment could justify barring Trump from future office – and the resolution to do so may require only a majority vote in both houses of Congress, though enforcement would likely also need a ruling from a judge.

Eliga Gould is professor of history at the University of New Hampshire.

5 comments for “Why the British Abandoned Impeachment”