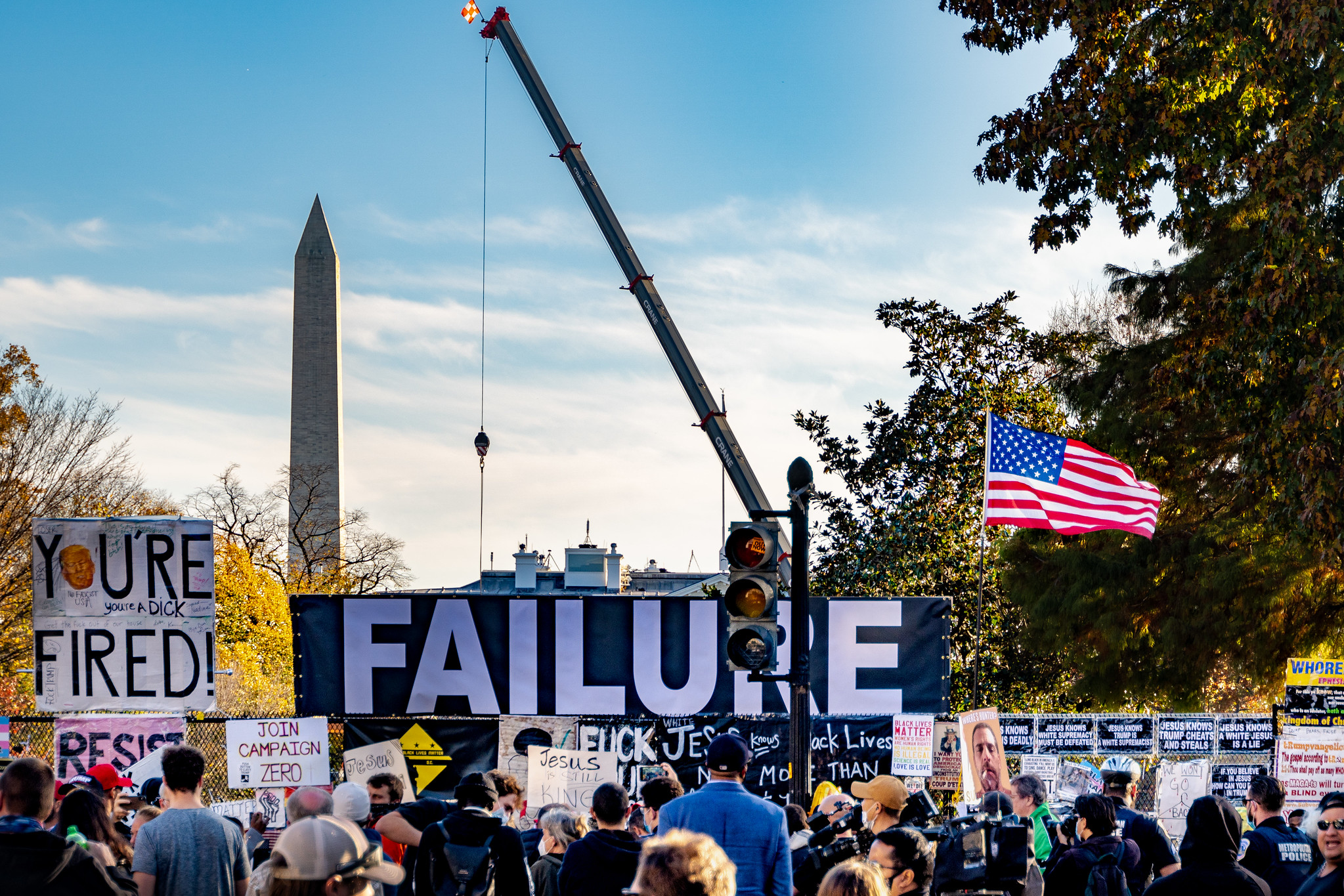 While Americans get stoked into a mutual tribal partisan loathing by a corporate media, Jonathan Cook says the elite enjoy a free hand to pillage the planet and the commons.

It is a fitting end to four years of Donald Trump in the White House.

On one side, Trump’s endless stoking of political grievances — and claims that November’s presidential election was “stolen” from him — spilled over into a mob storming the U.S. Capitol. They did so in the forlorn hope of disrupting the certification process of the Electoral College vote, which formally declared his opponent, Joe Biden, the winner.

On the other side, the Democratic Party instituted a second, unprecedented impeachment process in the slightly less forlorn hope of foreclosing any possibility of him running again in 2024.

Russia wants us to know it is very much against Trump impeachment. https://t.co/tpvVJtXewT

Barely concealing its alliance with the then-incoming Biden administration, Silicon Valley shut down Trump’s social media megaphone. House Speaker Nancy Pelosi lobbied the Joint Chiefs of Staff to cut an “unhinged” Trump out of the chain of command, in a move that was reportedly rejected out of hand by Pentagon officials because, they told The New York Times, it would amount to a “military coup.”

And Biden, who boasts that he was the author the Patriot Act years before 9/11, has been touting a new “domestic terrorism” bill, as though the U.S.  did not already have a plethora of ways to crack down on dissent, of both the legitimate and the illegitimate varieties.

None of this is just the latest sign that the U.S.  political system has degenerated into tawdry theater. It is growing evidence that U.S.  politics is devolving into a permanent confrontation between two authoritarian tribes. Both are convinced that the other side is un-American, perverting the true republic. Both are unwilling to compromise, believing they share no common ground. And ultimately both are fighting for a rotten cause.

In any other moment, it would not be hard to understand why it's incredibly menacing to have elected officials supported by Silicon Valley publicly demanding that those mega-corporations use their monopoly power to silence adversaries. But as was true after 9/11, anything goes: https://t.co/OwhHfuvKTf

This is not a divide between ethical and unethical politics. This clash is now a bitter grudge match. It is civil war by other means. Not only is the chasm between these rival camps widening, but the real criminals are making off —  as they always do —  with the loot.

Each tribe has been coalescing for a while now around a center of gravity. On the Republican side that became clear with the emergence of the Tea Party and the birther movement during President Barack Obama’s tenure. But it took Trump’s election as president in 2016 to create a proper oppositional center of gravity on the other side.

Those in the Democratic tribe who now disdain Trump and his supporters for their desperate refusal to accept November’s result overlook how they greeted Trump’s victory in 2016. They struggled against the legitimacy of that outcome too, even if they did not resort to the overt violence of the mob at the Capitol.

The presidency is the only office where you can get more votes & still lose. It's time to end the Electoral College. https://t.co/OXZ9vHaIH1

The Democratic tribe took to the streets as well, in protest marches in cities across the U.S.  under the banner of the Resistance, denying Trump was their president. That was understandable, given his personal behavior and the policies he advocated. But it did not end there.

The disavowal of the Trump presidency quickly regressed into a dangerous narrative —  one that has never properly gone away, despite the dearth of evidence to support it. The claim was not only that the Russians interfered in the 2016 election to help Trump win, but that Trump himself had actively colluded with Russia to steal the election from his opponent, Hillary Clinton.

Anything that had damaged Clinton —  including emails showing that the Democratic leadership rigged its own primaries to make sure she was the party’s candidate rather than Bernie Sanders —  got sucked into that vast conspiracy theory. That included the messenger of these bad tidings: WikiLeaks and its founder Julian Assange.

Would Trump have won without Russia’s help? Wikileaks was THE negative drumbeat of the last month against Hillary. We don’t really know but seems legit answer to say no. https://t.co/3TZyVQDKLK

For years, the Democratic tribe has invested its considerable energies in fruitless efforts to prove its theory, including the first bid to remove Trump through an entirely self-defeating impeachment process.

None of this could be justified politically. It was a Democrat counterpoint to Trump’s MAGA slogan: “Make America Great Again”. Democrats promised the much less catchy SAPD: “Save America from President Deplorable.”

Can you imagine how much better off we’d be right now if Trump was convicted the first time he was impeached?

For this tribe, Trump was an illegitimate president from the outset, one whose election to the highest office in the land revealed something unwholesome about their country they preferred to avert their gaze from because it might implicate them too. Removing Trump largely eclipsed the struggle to improve the lives of ordinary Americans.

The obsession with Trump above everything else seemingly rationalized any means —  fair or foul —  to be rid of him. Few thought about how this would look to his supporters or to those not already safely ensconced in one or other tribe.

To understand, they now need only look to the storming of the Capitol How they felt watching the building being ransacked —  a Deplorable putting his feet up contemptuously on House Speaker Nancy Pelosi’s desk —  was how Trump’s tribe felt watching their president being denounced as a Russian agent and dragged through impeachment proceedings.

This mood is not likely to dissipate. The two political tribes are locked in an antagonistic tango, mirroring each other’s moves, each other’s grudges, each other’s sense of victimhood. Much more unites them than they would ever care to admit.

This may be the pathology, but what of the cause.

What we see here is the culmination of a festering culture war stoked by an unhealthy investment by both sides in a simple-minded and highly divisive identity politics.

Much has correctly been made of the white supremacism of the most loyal sections of Trump’s tribe, and that was on show again during the invasion of the Capitol. The Confederate flag, the neo-Nazi slogans, the T-shirts extolling the Jewish supremacy of Israel are all indicators of a toxic politics of white grievance that may be less articulated but is still felt by a wider swath of Trump’s supporting constituency.

This ugly identity politics is rightly rejected by the other tribe, but is nonetheless mirrored in its equally deep commitment to identity politics. The progressive coalition of identities at the core of the Democratic Party may be more reassuring to modern sensibilities, but has served in practice to accentuate to parts of the Trump tribe the supposed threat to their white identity.

This is not to equate the justified struggle of Black Lives Matter against endemic racism, including in the police, with the reactionary forces seeking to preserve some notion of white privilege. It is to simply observe that when the political field of battle exclusively revolves around identity, then one cannot be surprised if each side continues to frame its struggle in precisely those terms.

Those who live by the identity sword are likely to die by that same sword.

The Trump tribe want their president, and the Republican Party more generally, to guarantee a white supremacism they fear is being eroded as the Democrat Party flaunts its progressive, multicultural credentials. The Democrat tribe, meanwhile, wants to challenge the old order —  and most especially reactionary institutions like local police forces —  that have been an oppressive bulwark against change.

This dynamic can lead only to permanent confrontation, bitterness and alienation.

There is a way out of the dead-end culture war that pits one tribe against the other. It is to formulate an alternative, popular politics based on class struggle —  the 99 percent against the 1 percent. But neither the Republican nor the Democratic leaderships, or the respective medias that cheerlead them, has any interest in encouraging a political realignment of this sort.

The Democratic Party is not a vehicle for class struggle, after all. Like the Republican Party, it is designed to preserve the privileges of an elite. Its biggest donors, like the Republicans’, are drawn from Wall Street, Silicon Valley, Big Pharma, the arms industries. The political battle in the United States is between two parties of capital united by far more than divides them.

The shadow play of U.S.  politics is the enervating, antagonistic confrontation of identities described above. While ordinary Americans get stoked into a mutual tribal loathing by a corporate media that profits from this theatre of hate, the elite enjoys a free hand to pillage the planet and the commons.

“Media firms work backward. They first ask, ‘How does our target demographic want to understand what’s just unfolded?’ Then they pick both the words and the facts they want to emphasize.” https://t.co/pI593aN6Xe

While we fixate on identities that have been crafted to divide us, while we remain immersed in the surface of politics, while we are distracted from the real battle lines, those elites prosper.

Political paralysis may not harm the establishment. But it is profoundly damaging to us, the 99 percent, when our communities are being ravaged by a pandemic, when our economies are in meltdown, when the planet is on the brink of ecological collapse.

We need a functioning political system that reflects popular priorities, like Medicare For All, a dignified minimum wage and free college; that understands the urgency of the challenges posed by multiple crises; and that can marshal and channel our energies into solutions, not into endless, irresolvable confrontations based on grievances that have been cultivated to weaken us.

Trump is not the enemy. That target is far too small and limited. The class he belongs to is our enemy, as is the system of privilege he has spent the past four years upholding and his successor will defend just as assiduously.

Whether Trump is ultimately convicted or not in the Senate, the system that produced him will be acquitted —  by Congress, by the new president, by Wall Street, by the corporate media.

It is we who will pay the price.

← Curiouser and Curiouser: The Proud Boys’ Leader as a ‘Prolific’ Law Enforcement Confidential Source
The Q-Word: Weapon of Choice for Smearing Opponents →

23 comments for “Trump May be on Trial, but System That Produced Him Will Be Acquitted”