American voters should have a say on the cabinet that a presidential candidate proposes to go into power with, writes Joe Lauria. 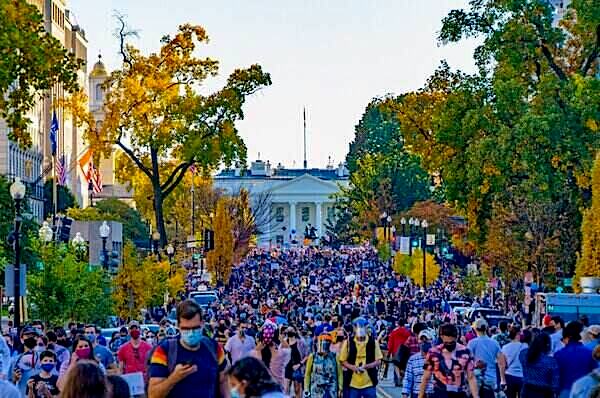 Biden supporters celebrate his victory without knowing who his Cabinet will be. (Flickr/ Ted Eytan)

Who a new president surrounds himself or herself with is a matter of extreme importance to the direction of the country, yet in the U.S. system it is only after a presidential election that voters get to see what a new president’s Cabinet will look like.

For an unfathomable reason, a challenger for the highest office is only obliged to disclose the proposed vice president, the most inconsequential post in a new administration.

After a new president is elected a bizarre game of leaking the names of candidates for powerful positions such as secretary of state, secretary of defense and national security adviser are leaked to the media. It is then up to interests groups, activists and members of the winning party to lobby privately and publicly for or against those names with no certainty of success.

The public is not privy to the closed-door horse trading that might be involved in these very consequential selections, which the voter has absolutely no say in.

For instance, Michele Flournoy was widely touted as Joe Biden’s pick for secretary of defense. Progressive groups argued strenuously against her. In the end, Biden chose former Gen. Lloyd J. Austin III, a board member of a major military contractor. It’s a mystery what led to Biden choosing him over Flournoy. The press only reported the fact that Austin is African-American and Biden had already nominated several women for other posts.

Michael Morell, a former CIA deputy director, has been floated as Biden’s director of Central Intelligence, a pick that has upset some powerful Democrats.  Sen. Ron Wyden (D-OR), a Senate Intelligence Committee member, has accused Morell of being a “torture apologist” and along with other Democratic members opposes his potential nomination. Yet Tom Vilsack, the president and lobbyist for the U.S. Dairy Export Council, known as Mr. Monsanto, was nominated by Biden for Agriculture Secretary, so far, with barely a peep.

Only Up to the Senate

Once a nomination is made, only the Senate, and not the voters, gets to approve most of these positions (not the influential national security adviser, however.)

As most Cabinet picks over the past couple of decades have been former government officials turned industry lobbyists, turned back through the revolving door into government (usually to supposedly regulate an industry he or she had just lobbied for), it is especially detrimental that voters have nothing to say about this farce of the American system.

Voters might indeed be skeptical of a candidate’s choice of lobbyists to be put in charge of related government departments, if they only knew who the candidate’s cabinet picks were before the election.  Voters can factor in an incumbent’s existing cabinet, giving an unfair advantage to a challenger.

Requiring a center-right Democrat like Biden to pick cabinet members ahead of time might have forced him to commit to progressive nominees in order to get the progressive vote.  As it is now, Biden only needed to allow the left-wing of the party to write parts of a meaningless party platform and make hollow promises to get their votes, and then deny them cabinet positions after election.

Giving Voters a Say on the Cabinet

American voters should have a say on the cabinet that a presidential candidate proposes to go into power with.

In a parliamentary system, the party out of power designates elected MPs as “shadow” cabinet members so that when the time for an election comes, voters know who will occupy the most important positions if the opposition wins and forms a new government.

But a parliamentary system in the United States is not needed when it comes to naming cabinet members. Candidates should be required to disclose their cabinet picks before the election so the voters can decide.

The public would be advised and would have to give its consent, not only the Senate. Absent criminal or serious ethical misconduct the cabinet member should be required to serve at least two years, in a second term as well.

After all the people are not just choosing a president, who as Donald Trump has especially shown is most often not fully in charge, but an unelected, powerful administration that will have influence over decisions that can determine life or death in the U.S. and abroad.