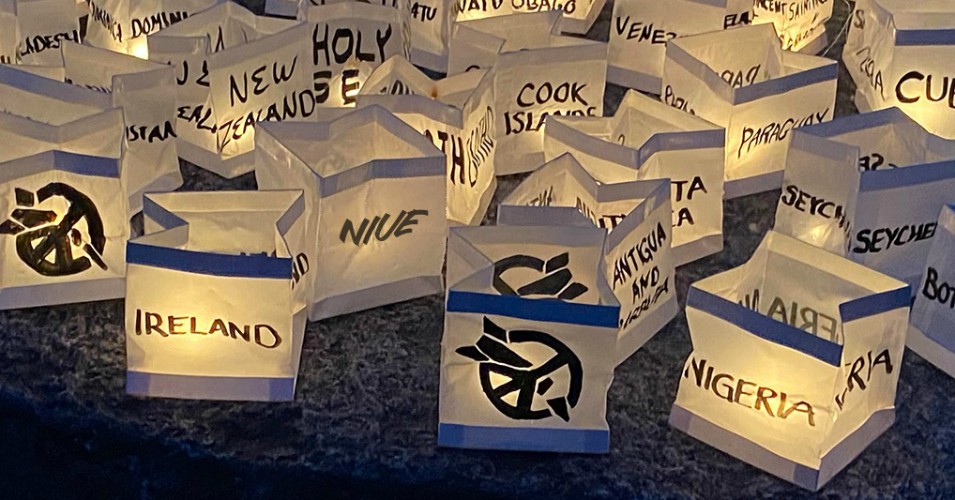 In August 2020, Ireland, Nigeria and Niue marked the 75th anniversary of the nuclear attack on Hiroshima by ratifying the U.N. treaty that bans all activities related to nuclear weapons. (ICAN/Facebook)

Disarmament advocates and nuclear experts responded with alarm Wednesday to reporting that the Trump administration is urging countries that support a United Nations treaty to ban nuclear weapons to ditch the pact before it reaches the 50 ratifications necessary to enter into force.

Since 2017, 47 countries have ratified the treaty. The Associated Press obtained a U.S. letter to signatories which reportedly “says the five original nuclear powers — the U.S., Russia, China, Britain and France — and America’s NATO allies ‘stand unified in our opposition to the potential repercussions’ of the treaty.”

According to the news agency:

“It says the treaty ‘turns back the clock on verification and disarmament and is dangerous’ to the half-century-old Nuclear Nonproliferation Treaty, considered the cornerstone of global nonproliferation efforts.

‘Although we recognize your sovereign right to ratify or accede to the Treaty on the Prohibition of Nuclear Weapons (TPNW), we believe that you have made a strategic error and should withdraw your instrument of ratification or accession,’ the letter says.”

Formally adopted at the UN’s New York headquarters in July 2017 after months of negotiations, the TPNW opened for signature that September. It is the first legally binding global treaty to fully prohibit nuclear weapons with the ultimate goal of their total elimination. State parties are banned from developing, testing, producing, acquiring, possessing, stockpiling, using, or threatening to use such weapons.

Supporters of the TPNW — including the International Campaign to Abolish Nuclear Weapons (ICAN), which won the 2017 Nobel Peace Prize “for its work to draw attention to the catastrophic humanitarian consequences of any use of nuclear weapons and for its ground-breaking efforts to achieve a treaty-based prohibition of such weapons” — sharply condemned the Trump administration’s effort to undermine the pact.

This unprecedented & desperate attempt by the Trump administration to stop #TPNW from entering into force is a new low for this government.

But despite bullying & pressure, support the the #nuclearban treaty continues to grow across the world. ??????https://t.co/tUNNzJz9KR

The “increasing nervousness, and maybe straightforward panic, with some of the nuclear-armed states and particularly the Trump administration” shows they “really seem to understand that this is a reality: Nuclear weapons are going to be banned under international law soon,” ICAN Executive Director Beatrice Fihn told the AP.

“It’s outrageous to ask governments to withdraw from this multilateral U.N. treaty, but it also show that the U.S. knows it will have an impact,” Fihn added on Twitter. “The last time a country withdrew from a multilateral nuclear weapons treaty was when North Korea left the NPT in order to develop nuclear weapons.”

Denouncing the Trump administration’s push to block the TPNW as “desperate,” she said, “It’s reckless and a new low point.”

Fihn was far from alone in issuing a scathing critique of the U.S. letter. “This is completely outrageous and yet somehow not at all surprising,” tweeted John Carl Baker, the nuclear field coordinator and senior program officer at Ploughshares Fund, which supports the reduction and eventual elimination of nuclear weapons.

Daryl Kimball, director of the Arms Control Association, responded with a Twitter thread that also addressed the other nations mentioned in the letter. “Wow,” he wrote. “When it comes to nuclear weapons and international security, the current leadership of the ‘P5’ are arrogant, out of touch, incompetent, divisive, and very wrong.” 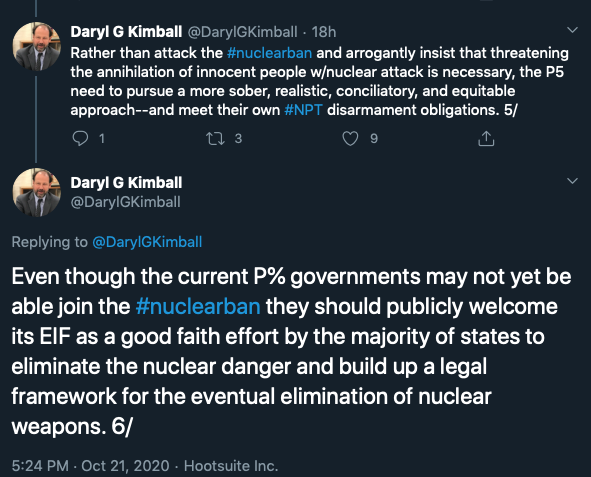 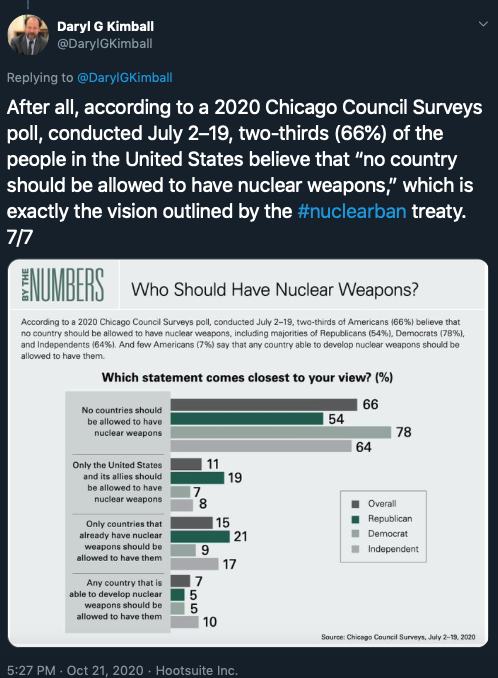 Reiterating that the treaty is only three ratifications from entering into force, Ray Acheson, director of the Women’s International League for Peace and Freedom disarmament program, said in a series of tweets that “when a so-called ‘military power’ is this afraid of international law, you know you’ve done it right.”

“It’s incredible that a nuclear-armed state is demanding other countries withdraw from a treaty banning nuclear weapons,” added Acheson, who also has ties to several other antinuclear advocacy groups. “It has sunk billions into ‘preventing proliferation’; the #nuclearban reinforces norms against these weapons that reinforce non-proliferation objectives.”

“It’s clear, once again, that the nuclear-armed states’ purported objections to the #nuclearban are based on obfuscation,” Acheson concluded. “Their real concern is that this treaty, to paraphrase Hiroshima survivor Setsuko Thurlow, makes weapons that are already immoral, now illegal.”

← ELECTION 2020: The United Politics of America
US Spends More Than $80 Billion a Year Incarcerating 2.3 Million People →