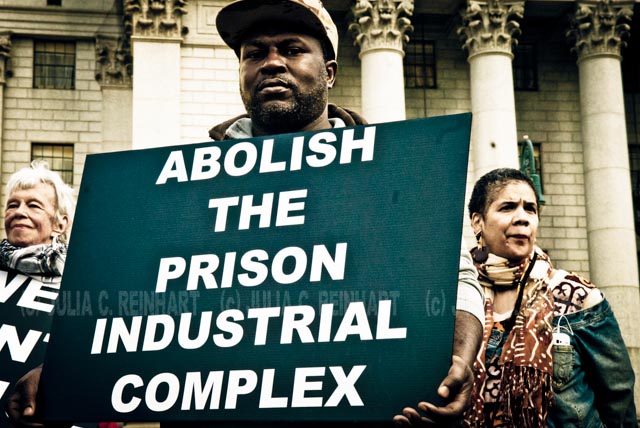 With the onset of the Covid-19 pandemic, many were shocked to see woman, children and migrants — including many pre-trial and pre-hearing — who had never been convicted of anything crammed into overcrowded lock-ups that might as well have been petri dishes for community spread of the disease.

By the middle of October, close to 150,000 residents and almost 30,000 staff and workers had tested positive. 1,122 detainees and 42 staff had died according to the Behind Bars Covid Data Project of UCLA.

With movements calling for defunding and divesting, people are finally talking about spending and raising the heat on the thousands of corporations that profit off the millions of people we lock up.

For many Americans, there’s never been a better time to reconsider the entire system. Years of work by abolitionists like Angela Davis, Ruthie Gilmore, Mariame Kaba and organizations like Critical Resistance are paying off.

With movements calling for defunding and divesting, people are finally talking about spending and raising the heat on the thousands of corporations that profit off the millions of people we lock up. The list of 4,100 prison contractors from the advocacy group Worth Rises includes thousands of names you know, like Black and Decker and Smith and Wesson, and thousands more you don’t.

That heat has translated into action. In 2019, JP Morgan and Bank of America agreed to stop lending to prison construction. The HEROES Act passed by the House in the early days of the pandemic restored FCC regulation over the crazy costs of prison phone calls. One individual was shamed off an LA Art museum board this fall.

Divestment has a track record. In South Africa, it was economic pressure, from students and shareholders and politicians and unions that pushed racial apartheid into crisis.

But today, while South Africa’s government looks a lot like the nation, the biggest corporations, and the lion’s share of the nation’s capital, is still overwhelmingly in white hands.

The U.S. has a chance to go one better than South Africa. As much as we talk about harm and what hurts our society, our neighborhoods and our democracy, we also need to talk about healing. And that means money needs to move not just out of incarceration and into care, but into the hands of those people and communities whom our current system has harmed most.

Especially after Covid, the most contentious election in living memory and the most layoffs since the 1930s, we need to invest in what closes our killer wealth gap and makes our society whole. Community healthcare, education, arts, worker-owned businesses? What difference could $80 billion make invested in improving the life chances of the most vulnerable? And beyond voting for someone else to do it, how would you yourself go about investing in that?

Laura Flanders interviews forward-thinking people about the key questions of our time on The Laura Flanders Show, a nationally syndicated radio and television program also available as a podcast. A contributing writer to The Nation, Flanders is also the author of six books, including The New York Times best-seller, BUSHWOMEN: Tales of a Cynical Species.  She is the recipient of a 2019 Izzy Award for excellence in independent journalism, the Pat Mitchell Lifetime Achievement Award for advancing women’s and girls’ visibility in media and a 2020 Lannan Cultural Freedom Fellowship for her reporting and advocacy for public media. lauraflanders.org