Oct. 9 — the date in 1967 when Che Guevara was murdered — should be celebrated as the International Day to Abolish the CIA, writes Vijay Prashad. 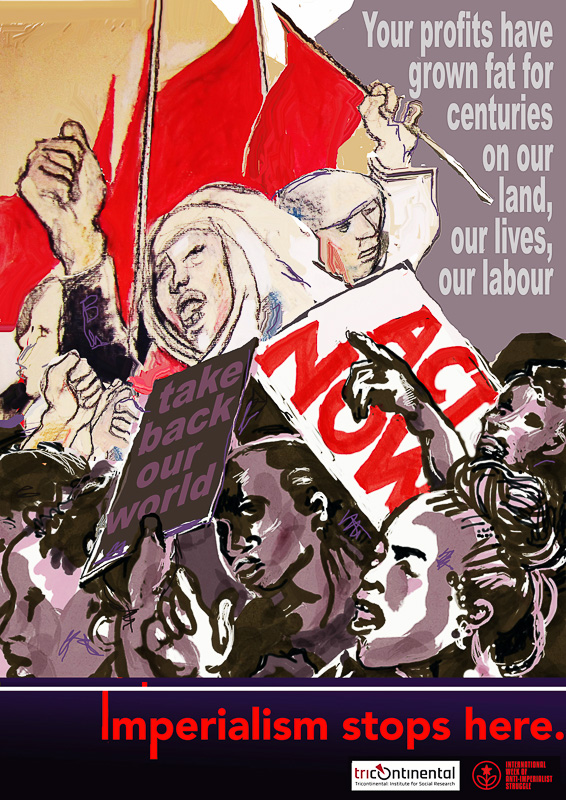 In 1965, Ghana’s Prime Minister Kwame Nkrumah published a bold book, Neo-Colonialism: The Last Stage of Imperialism. In it, Nkrumah documented in great detail the way in which European and North American multinational firms — in close collaboration with their governments — continued to smother the aspirations of the new nations of Africa. As an example, Nkrumah took up his own country, Ghana, which had been known by the colonial name “the Gold Coast” until 1957.

One of the old British colonial companies, Ashanti Goldfields, continued to make fabulous profits from the hard labor of Ghana’s gold miners. When Nkrumah’s government tried to raise the taxes on the firm, London newspapers screamed in outrage. Nkrumah wrote about how the gold fetched “merely token returns” for the Ghanaian people, while Ashanti Goldfields offered vast dividends to its European shareholders. This, Nkrumah wrote, is neo-colonialism. 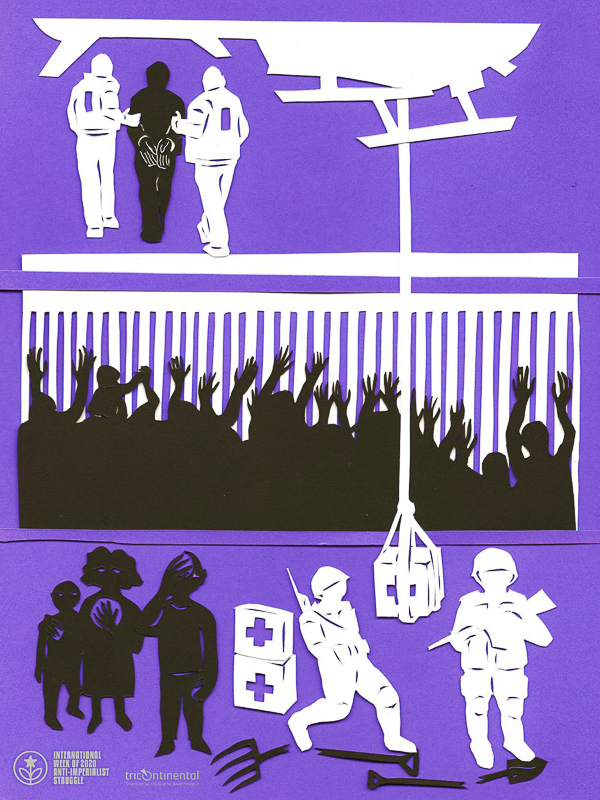 The United States government was furious about the “irresponsible extravagances” in Nkrumah’s book and decided to punish him by refusing to allow $300 million in short-term aid to cover the costs of importing food. Nkrumah was unfazed. He decided to go to Hanoi (Vietnam) to meet with Ho Chi Minh. It was during this journey that the military in Ghana — egged on and assisted by the Central Intelligence Agency of the United States government and British intelligence (MI6) — seized power. Nkrumah’s attempt to build sovereignty and dignity for the Ghanaian people was side-lined.

The country’s wealth would continue to be siphoned off to multinational firms. The terrible injustice of imperialism, whose direct colonial form had been defeated when Ghana won independence under Nkrumah’s leadership in 1957, would morph into a new form, which Nkrumah called neo-colonialism. Neo-colonialism, he wrote in his 1965 book, “means power without responsibility and for those who suffer it, it means exploitation without redress.” This formula remains intact today. 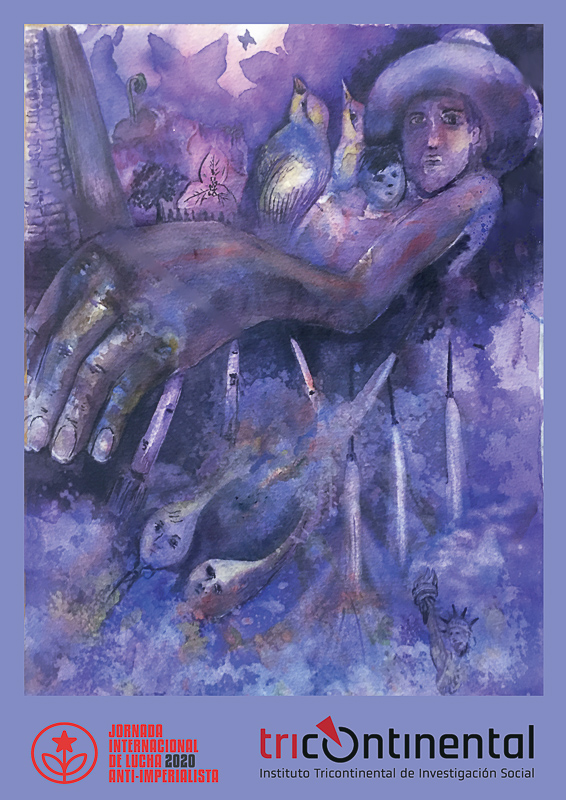 The concept of “imperialism” is treated as if it were anachronistic, no longer useful to explain the situation in our world. What other concept would help us to understand why both the private and public sector external debt of developing countries has increased over the past decade, and why this debt — now over $11 trillion — cannot be paid by countries with resources of great value?

The resources in the Democratic Republic of the Congo alone are estimated to be worth at least $24 trillion; meanwhile, despite Congo having half of Africa’s water resources and forests, 51 million of the country’s residents remain without access to potable water – a result of the structural underdevelopment of Africa. An UNCTAD report from earlier this year estimated that the debt-servicing payments for 2020-2021 would be between $2.7 trillion and $3.4 trillion (another estimate shows the upper limit at $3.9 trillion, of which about $3.5 trillion is for principal payments).

No suspension or cancellation is in the cards because it is through instruments such as debt that governments are held in line and wealth is siphoned off to enrich multinational corporations and wealthy bondholders. 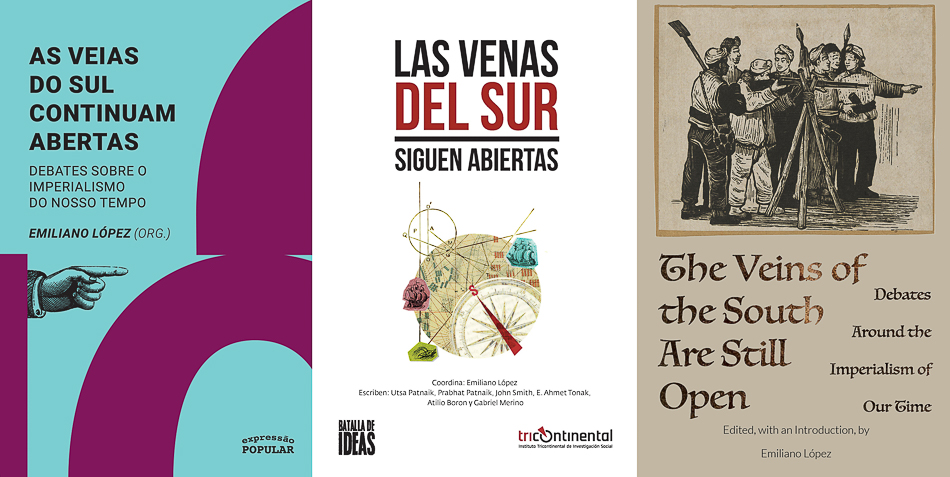 A recent book edited by Emiliano López of the Tricontinental: Institute for Social Research in Buenos Aires, The Veins of the South Are Still Open: Debates Around Imperialism of Our Time, provides a rich sense of the debate around imperialism; the book has essays by Prabhat Patnaik, Utsa Patnaik, John Smith, E. Ahmet Tonak, Atilio Borón and Gabriel Marino.

The book comes out as part of a global process known as the International Week of Anti-Imperialist Struggle, which began on Oct. 5 in Caracas (Venezuela) with a seminar sponsored by the Simon Bolivar Institute and Tricontinental: Institute for Social Research, and ends Oct. 10 with a festival of anti-imperialism. 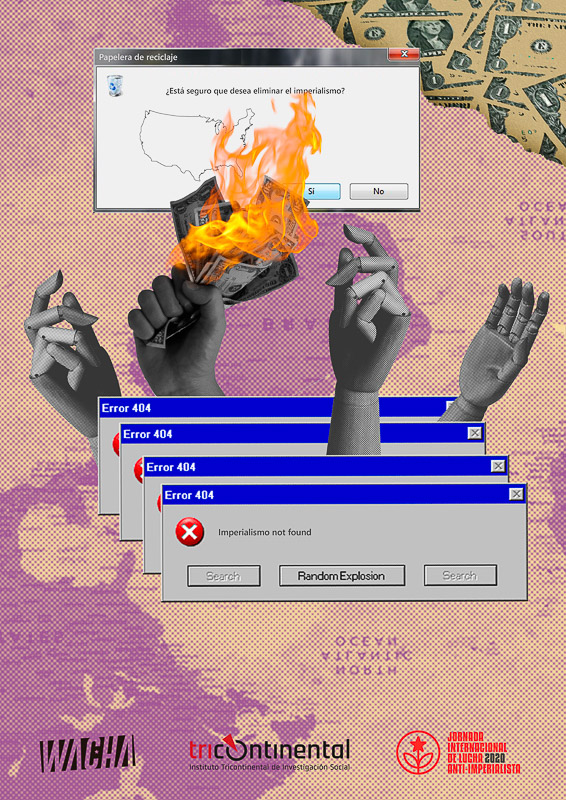 The International Week of Anti-Imperialist Struggle released the following “Manifesto of the Future:”

Manifesto of the Future

“Our humanity is threatened by an invisible virus that spreads rapidly; but we have long been challenged by other viruses, such as unemployment, hunger, racism, patriarchy, inequality, and war. These viruses manifest themselves differently in different parts of the world and sharply attack the lives of workers, peasants, and all of those who experience the impact of social inequality. Meanwhile, there is a minority of people that profit from the devastation.

“The capitalist system has no answers to these crises; its policies are hollow. Rather than find a way to house us and feed us, the capitalists build vast machineries of destruction: police forces and militaries that suffocate the life out of the working class inside the rich nations and of the working class and the peasantry in the poorer nations. If a poorer country tries to stand upright, seeking to exercise its sovereignty, a full arsenal of power is used against it: financial, diplomatic, and military power. They dominate us with weapons, but also with ideas; they try to convince us that their views are the correct views.

“The managers of the capitalist system are quick to unholster their guns and point them at distant adversaries, drive their tanks into our lands and occupy our homes, tear up nature and destroy our world; it is easier for them to provoke war than to fill the bellies of human beings with food. They would rather inflame people with racism and jingoism than to manage the fact that a broken system has come to rely more and more on the unacknowledged care labour of women, more and more on the harsh working conditions imposed on miners and factory workers.”

Leaders of people’s movements across the world read the Manifesto for the Future.

The planet is on fire, the viruses are on the march, hunger stalks the land, and yet, even in this mess, we – the vast majority of the people on the planet – have not given up on the possibility of a future. We hope for something better than this, a world beyond profit and privilege, a world beyond capitalism and imperialism, a world singing the song of humanity. Our hearts are bigger than their guns; our love and our struggle will overcome their greed and indifference.

Many seeds are being planted by our movements. We need to water them, to tend to them, to make sure that they bloom. We will build a future that cherishes life rather than profit, a future of fellowship amongst peoples rather than racist wars, a future in which social hierarchies are abolished, and in which we enjoy mutual dignity.

Only when it is dark enough can you see the stars. It is now dark enough. 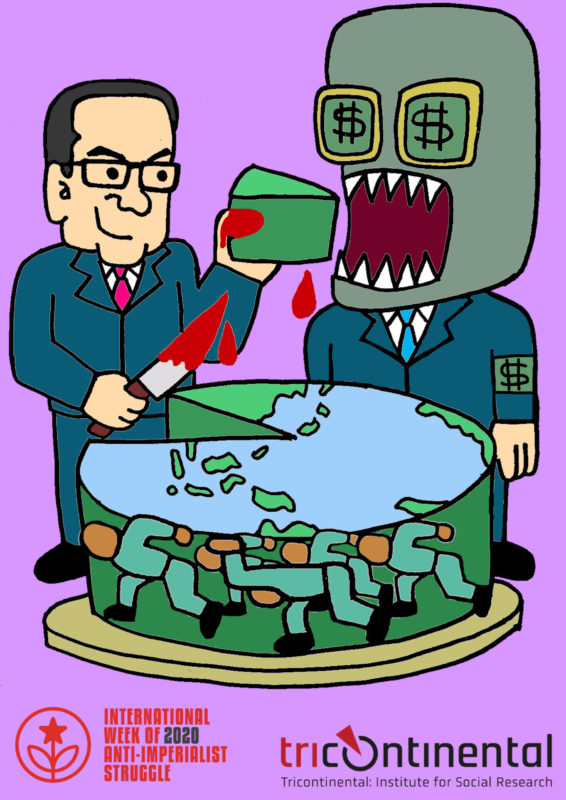 The art for this newsletter comes from the Anti-Imperialist Poster Exhibition developed by Tricontinental: Institute for Social Research. This is our third of four exhibitions; the first two were on neoliberalism and on capitalism, this is on imperialism, and the final one will be on hybrid war. Sixty-three artists from twenty-six countries participated in making poster art for this exhibition.

On Oct. 9, 1967, Che Guevara was murdered by agents of the CIA in Bolivia. They had captured him two days previously, and — despite orders to keep him alive — were informed that he must be killed. As part of the International Week of Anti-Imperialist Struggle, almost 20 left publishers have released a book called Che in 20 languages, from Malayalam to Spanish.

The volume collects two classic texts by Che – Man and Socialism in Cuba (1965) and Message to the Tricontinental (1967) – along with a preface by María del Carmen Ariet García (of the Instituto Che Guevara, Havana, Cuba) and an introduction by Aijaz Ahmad (Senior Fellow, Tricontinental: Institute for Social Research). The free ebook can be downloaded on our website.

In January 1965, Che travelled to Ghana where he met Nkrumah for a conversation about Cuba, Latin America, and the 1961 murder of Congo’s leader Patrice Lumumba. Congo was on the minds of both Nkrumah and of Che; when Che created a troop of fighters in Tanzania, they took the name “Patrice Lumumba Brigade.” The murder of Lumumba — egged on by Belgian intelligence and the CIA — disturbed both Nkrumah and Che.

A year later, Nkrumah would be overthrown in a coup backed by the CIA; two years later, Che was killed by CIA men. The impact of the CIA’s actions can be gauged in the defeat of the projects for sovereignty in much of the Third World.

It is about time we commemorate Oct. 9 as the International Day to Abolish the CIA.