It’s just the latest in a series of bogus national security-related coverage by the U.S. newspaper of record, writes Ben Norton. 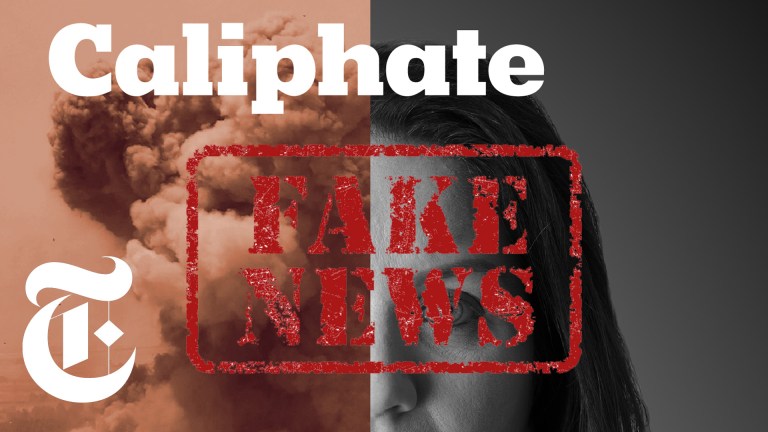 The top U.S. newspaper has been exposed for overseeing another large-scale fake news operation.

The main source for The New York Times’ award-winning podcast, “Caliphate,” has been arrested and charged with lying about joining ISIS. The major media outlet had relied on this man’s fabricated story as the core of its reporting, and said two U.S.  government officials had independently confirmed his identity.

On Sept. 30 the Times said it was beginning a review of the podcast. But the fake news spread by the American “newspaper of record” has touched off a political scandal in Canada.

Hosted by Times’ reporter Rukmini Callimachi, the Caliphate podcast claims to tell the story of the rise and fall of the so-called Islamic State in Syria and Iraq. The show has attracted millions of listeners, and is one of the most popular podcasts on the globe. The  New York Times’ PR team actively boasts of its work on the “chart-topping show” in marketing materials.

The podcast has aggressively pushed the propaganda line of Syria’s Western government-backed opposition. While the paper was publicly praised for its “nuance” in “humanizing” Salafi-jihadist foreign fighters who joined ISIS, massacred civilians, ethnically cleansed religious minorities, and turned women into sex slaves, Caliphate simultaneously portrayed the Syrian government that defeated ISIS as the epitome of evil.

The host of the podcast, Callimachi, euphemistically described genocidal ISIS extremists as “rebels fighting Assad’s soldiers, standing up for the Muslim people,” while blaming the rise of the Islamic State on the “crimes of President Bashar al-Assad” and depicting the “Assad regime” as a collection of sadists who kill civilians for fun.

The star of Caliphate was a young man using the pseudonym Abu Huzayfah al-Kanadi (“the Canadian” in Arabic). Abu Huzayfah concocted an elaborate tale, claiming to the Times that he traveled to Syria in 2014 to join ISIS, where he claimed to have killed people in public executions. Then Huzayfah said he went to Turkey and Pakistan before returning to Canada.

There was just one problem: the wildly popular podcast was based on a hoax.

The real Abu Huzayfah al-Kanadi has been identified as a 25-year-old man living in Toronto named Shehroze Chaudhry. He was arrested by the Royal Canadian Mounted Police (RCMP) on Sept. 25, and faces up to five years in prison under Canada’s terrorism hoax laws.

Chaudhry was not a mere guest of the Times’ Caliphate podcast; he was the key source that Rukmini Callimachi and her employer relied on. “Abu Huzayfah” was personally featured or mentioned in the prologue and nine of the 10 episodes.

Callimachi has earned fame by marketing herself as a journalistic expert on ISIS and violent Islamist extremism. The Guardian described her in a fawning profile as the “the podcasting terror expert getting into the minds of Isis.”

After winning the prestigious Peabody Award in 2018, Callimachi was named as a finalist for the renowned Pulitzer Prize the following year thanks to her work on the podcast. This year, she earned the vaunted assignment of lead reporter on the police killing of Breonna Taylor in Louisville, Kentucky.

When news broke that Abu Huzayfah was a fraud named Chaudry, Callimachi tried to distract from the scandal by claiming on Twitter that her podcast raised concerns about Chaudhry’s narrative in episode six. She did not mention, however, that she continued to use “Abu Huzayfah” as a source in episodes seven, eight and 10.

1. Big news out of Canada: Abu Huzayfah has been arrested on a terrorist “hoax” charge. The narrative tension of our podcast “Caliphate” is the question of whether his account is true. In Chapter 6 we explain the conflicting strands of his story, and what we can and can’t confirm https://t.co/w0CbPGvzeA

In its own report on Chaudhry’s arrest, The New York Times said it “declined to discuss its sourcing” and downplayed the severity of the controversy.

According to the paper, “The Times had used geolocation to place Mr. Huzayfah on the banks of the Euphrates river in Syria.” That geolocation was performed by Malachy Browne, director of New York Times visual investigations, during episode six of Caliphate.

Abu Huzayfah had provided a video of himself supposedly shooting a pistol into the Euphrates river to prove to Rukmini Callimachi that he traveled to Syria on his way back to Canada from Pakistan. Browne used Google Earth Pro to locate the video on the river, prompting Callimachi and her producer, Andy Mills, to praise his work as “brilliant” and “incredible.”

But in episode six – the one episode where the podcast hosts investigated inconsistencies in Abu Huzayfah’s narrative – Callimachi pushed back when her producer suggested that their source might be a phony:

“Look, it makes sense to me that somebody that has been in the caliphate, that if he’s trying to exaggerate a little, you know, that if he’s trying to — ‘Oh, yeah, yeah, yeah, I was there when Baghdadi, you know, announced it, oh, my God!’ Whatever. That makes sense to me. But not going there at all and making up all of those details about the Albu Nimr tribesmen, about this execution, about what it’s like to hold the gun, about what it’s like to actually whip somebody, about the fact that the blood splashes back up on you, that would — I mean, that’s a level of invention? It’s too much! I mean, it’s — he’s providing details that nobody knows, you know?”

Later in that episode, Callimachi was informed by New York Times’ national security correspondent Eric Schmitt that “two different officials in the U.S. government at different agencies have told me is that this individual, this Canadian, was a member of ISIS.” 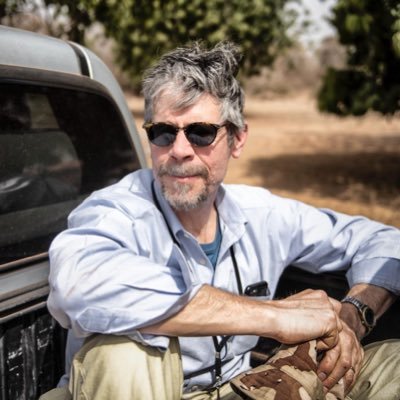 Schmitt again confidently assured Callimachi, “Two different sources in the American government have confirmed that he was active in some type of ISIS activities in Syria.”

This ultimately led the Caliphate host to conclude that “something will emerge” verifying Abu Huzayfah’s narrative of his time in ISIS.

Instead, he was exposed as a fraudster. And Schmitt’s two anonymous U.S.  intelligence sources were completely wrong, as was Browne’s geolocation seeking out the hoaxer on the banks of the Euphrates.

Canadian media outlets had raised concerns about Caliphate back in 2018. A CBC correspondent asked, “Did former Canadian ISIS member lie to The New York Times or to CBC News?” But their criticisms were ignored by the Gray Lady.

The fake news scandal has reverberated through Canada’s halls of power, with reports that Chaudhry’s claims to the Times had “fueled public outrage and debate in the House of Commons.”

The House leader from the Conservative Party, MP Candice Bergen, grilled the government of Canada’s Liberal Prime Minister Justin Trudeau, declaring in a fiery speech that went viral: “This guy is apparently in Toronto. Canadians deserve more answers from this government… Why aren’t they doing something about this despicable animal that’s walking around the country? This individual is speaking freely to the media.”

This is far from the only time The New York Times has been exposed for spreading false stories. The “newspaper of record” has a long history of printing fake news when it serves the interest of the U.S.  national security state.

In 1945, after the United States dropped nuclear bombs on Japan, the Timespublished a story titled “No Radioactivity in Hiroshima Ruin.” The newspaper’s impartial source was the chief of the U.S.  War Department, Major General T. F. Farrell, who “denied categorically that [the atom bombing] produced a dangerous, lingering radioactivity.”

To help sell the first U.S.  war on Iraq, The New York Times widely circulated and defended the fabricated claims of “Nayirah,” the teenage daughter of Kuwait’s U.S.  ambassador, who falsely claimed Iraqi soldiers were removing babies from incubators in Kuwaiti hospitals and leaving them on the ground to die.

As is public knowledge, the Times was instrumental in spreading the George W. Bush administration’s lies during the lead-up to the second U.S.  war on Iraq, falsely reporting that the government of Saddam Hussein had “weapons of mass destruction.” The only reporter who faced serious consequences for the scandal was Judith Miller, who later fell comfortably on her feet at Fox News. Still today, the Times boasts a collection of Iraq War boosters as top correspondents and columnists.

The Times printed transparently absurd claims to help justify NATO’s regime-change war on Libya in 2011. It also spread the lie that leader Muammar Gaddafi had been giving his soldiers Viagra and encouraging them to rape women.

The fictitious story and persona behind the Caliphate podcast controversy is just one example in a string of fake stories the Times has printed in its information war on the Syrian government.

One of the most notorious Times blunders on Syria was produced by Malachy Browne, the visual investigations director who appeared in Caliphate to geolocate the non-existent Abu Huzayfah. That report relied on glorified cartoon illustrations to “prove” that the Syrian government “gassed its own people” in the Damascus suburb of Syria in April, 2018, thereby justifying the U.S.  bombing of Syria that followed.

But as demonstrated by several whistleblowers from the Organization for the Prohibition of Chemical Weapons (OPCW), including a member of the fact-finding mission that visited the site of the supposed bombing, the incident in Douma was a staged event – a hoax put on by the Syrian opposition to trigger U.S.  military action.

Since the election of U.S.  President Donald Trump, The New York Times has been crucial in fueling hysteria around supposed Russian meddling in American politics.

Volunteering its pages as a dumping site for intelligence agencies, the paper has laundered CIA disinformation in the guise of reporting on Russiagate, spreading laughably absurd claims that Moscow is paying Taliban militants in Afghanistan bounties to kill U.S.  soldiers – comically thin stories that fall apart with the slightest bit of scrutiny.

If history is any indication, the Caliphate fake news scandal will be tossed down the memory hole, and Rukmini Callimachi will be rewarded with important new assignments. And before long, new national security stories will find their way onto the pages of the Times that go uncorrected even after they are exposed as bogus plants.