There were two reasons why Consortium News devoted so much space to the commemoration of the atomic bombings of Japan.

Over the past week, Consortium News published 15 articles related to the 75th Anniversary of the atomic bombings of Hiroshima and Nagasaki. Some readers might think we overdid it.

But there are two reasons why we thought the expansive coverage was warranted.

The first is that the only use so far of nuclear weapons was one of the most momentous moments in history. In Biblical terms, it is equivalent to the Flood. In historic terms, it can be compared with the collapse of the Roman Empire, though that took centuries, while the bombings took just seconds.

It was momentous, because like the Flood and the fall of Rome, the bombings ushered in a new historical era. In ways so much larger than the 9/11 attacks, Hiroshima and Nagasaki really did change everything.  It spawned the Nuclear Age, under which we have been living since, living with the threat of global annihilation haunting us.

The second reason is that even 75 years later, the myths concocted by the U.S. government about the reasons for dropping the bombs on civilian populations are still persistently believed by many Americans.  A common theme throughout the series, beginning with the video press conferences of the leading historians on the issue, was to factually debunk the disinformation that the atomic bombings were necessary to end the war with Japan, save American lives and even that innocent Japanese civilians “deserved it.”

Seven of the eight five-star American generals at the time, including Dwight Eisenhower and Douglas MacArthur, thought the bombings were completely unnecessary and immoral. We believe it is high time that everyone else does too. 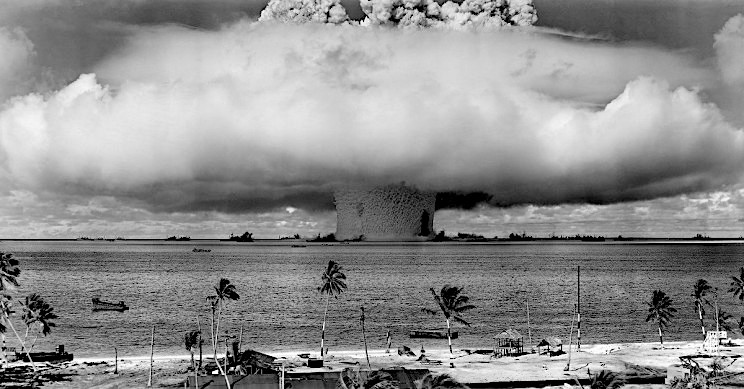 ← ATOMIC BOMBINGS AT 75: My Father Was to Invade Japan; He Did Not Feel Saved By the Bomb
Chris Hedges: America’s Death March →

22 comments for “Our Series on the Atomic Bomb”