Veteran Intelligence Professionals for Sanity have written a new memo to Attorney General William Barr in regard to new evidence indicating there was no hack of the Democratic National Committee computers. 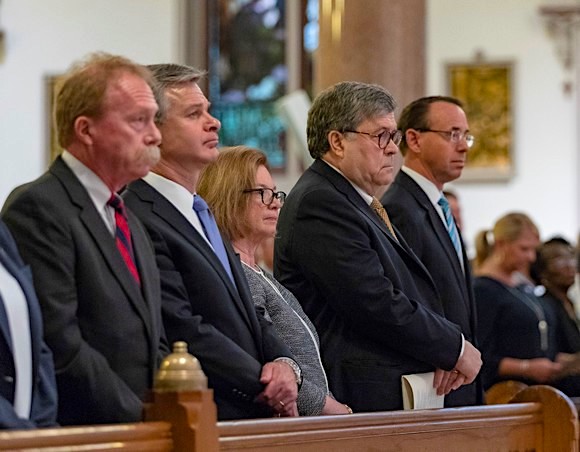 MEMORANDUM FOR: The Attorney General

Former Deputy Attorney General Rod Rosenstein’s June 4 testimony to the Senate Judiciary Committee brings to mind our Memorandum to you of March 13, 2019 — nine days before Special Counsel Robert Mueller gave you his “Report on the Investigation Into Russian Interference in the 2016 Presidential Election”.

At the time of our Memo, it was already clear that Mueller’s findings would be fatally incomplete. We were virtually certain that Mueller’s report would lack the forensic findings that we VIPS had arrived at through the kind of rigorous investigation that the FBI avoided doing. So we gave our Memo to you with the title: “Mueller’s Forensics-Free Findings”.

Sans forensics, Mueller’s report fell far short of Rosenstein’s earlier commitment “to ensure a full and thorough investigation”. It was also clear to us that relying for forensics on CrowdStrike, a private cyber-security firm of checkered reputation, picked and paid for by the Democratic National Committee, would signal a conflict of interest on this controversial issue. Now we know a lot more as a result of testimony released last month (but widely ignored in Establishment media).

?Not until May 7, 2020, when secret testimony to the House Intelligence Committee from late 2017 was made public, did it become completely clear that CrowdStrike has no concrete evidence that the DNC emails published by WikiLeaks on July 22, 2016 were hacked — by Russia or by anyone else. Seventeen months earlier, on Dec. 5, 2017, the president of CrowdStrike, former FBI cyber-crimes unit director Shawn Henry, admitted this in sworn testimony to the House Intelligence Committee. This is how he answered a leading question from ranking member Adam Schiff:

Mr. Schiff: Do you know the date on which the Russians exfiltrated the data from the DNC? … when would that have been?

Is it possible that no one told Special Counsel Robert Mueller about Henry’s testimony? If he was told, why did he not wind up his investigation sooner? Why instead did he keep it going through the election period of 2018, during which very few politicians or established media shed any doubt on the dogma of “Russian hacking of the DNC” and “Russian collusion” with the Trump campaign? How to explain that Mueller and his team could find no evidence of collusion/conspiracy between Russia and the Trump campaign, but accepted uncritically, without evidence, the Russian-hack story as revealed truth??

During the Rosenstein hearing on June 4, several senators made much of the fact that the Mueller report contained 448 pages. We are less impressed by the heft of Mueller’s two volumes than by the content they include — or don’t include. We look in vain for more nourishing evidence than Mr. Henry’s vague and clumsy references, in his Dec. 5, 2017 testimony, to unspecified “circumstantial evidence”. Henry, a horse’s-mouth witness, so to speak, admitted that there was no concrete evidence of a “Russian hack”, yet Mueller’s investigation persisted for another 15 months?

Can you throw light on these issues?

From our narrow, non-partisan perspective, we hope to avoid having to write a Memo #3 in this genre. More important, we think the public needs enlightenment on this key issue — and sooner rather than later. One keeps hearing that US Attorney John Durham is “investigating the investigators” to determine whether investigating Trump officials was adequately “predicated”. In all likelihood, there will be so many top-level Washington miscreants for DOJ and the media to focus on, that the story of the “Russian hack of the DNC” will be given a comfortable retirement, together with other accusations that are allowed to fade away — with some of them retaining, undiminished, the misbegotten certitude they have always enjoyed.

Given the line Americans have been fed by the media, one would expect your investigators to encounter very heavy flak, were they to determine that accusations of a Russian hack of the DNC were and remain without merit. Nonetheless, we believe that at least equal attention should be given to scrutinizing the major premise/predicate represented by the “Russian hacking” story, with as much attention as is given to the misguided, mischievous minor derivative premises upon which fragile but consequential conclusions have been based until now.

More specifically, is it not time for someone to draw attention to CrowdStrike’s testimony of Dec. 5, 2017? The NY Times is not going to do it. Past experience suggests that what the NYT will do is keep suppressing the sworn testimony of Shawn Henry from which the House Intelligence Committee learned — two and a half years ago — that “Putin’s hacking of the DNC” belongs in the same category as Saddam Hussein’s “weapons of mass destruction” in Iraq.

On the chance no one called to your attention our first memo of March 13, 2019 at the time, we include its Executive Summary below:

Media reports are predicting that Special Counsel Robert Mueller is about to give you the findings of his probe into any links and/or coordination between the Russian government and individuals associated with the campaign of President Donald Trump. If Mueller gives you his “completed” report anytime soon, it should be graded “incomplete.” Major deficiencies include depending on a DNC-hired cybersecurity company for forensics and failure to consult with those who have done original forensic work, including us and the independent forensic investigators with whom we have examined the data. We stand ready to help.

We veteran intelligence professionals (VIPS) have done enough detailed forensic work to prove the speciousness of the prevailing story that the DNC emails published by WikiLeaks came from Russian hacking. Given the paucity of evidence to support that story, we believe Mueller may choose to finesse this key issue and leave everyone hanging. That would help sustain the widespread belief that Trump owes his victory to President Vladimir Putin, and strengthen the hand of those who pay little heed to the unpredictable consequences of an increase in tensions with nuclear-armed Russia.

There is an overabundance of “assessments” but a lack of hard evidence to support that prevailing narrative. We believe that there are enough people of integrity in the Department of Justice to prevent the outright manufacture or distortion of “evidence,” particularly if they become aware that experienced scientists have completed independent forensic study that yield very different conclusions. We know only too well — and did our best to expose — how our former colleagues in the intelligence community manufactured fraudulent “evidence” of weapons of mass destruction in Iraq.

We have scrutinized publicly available physical data — the “trail” that every cyber operation leaves behind. And we have had support from highly experienced independent forensic investigators who, like us, have no axes to grind. We can prove that the conventional-wisdom story about Russian-hacking-DNC-emails-for-WikiLeaks is false. Drawing largely on the unique expertise of two VIPS scientists who worked for a combined total of 70 years at the National Security Agency and became Technical Directors there, we have regularly published our findings. But we have been deprived of a hearing in mainstream media — an experience painfully reminiscent of what we had to endure when we exposed the corruption of intelligence before the attack on Iraq 16 years ago.

This time, with the principles of physics and forensic science to rely on, we are able to adduce solid evidence exposing mistakes and distortions in the dominant story. We offer you below — as a kind of aide-memoire— a discussion of some of the key factors related to what has become known as “Russia-gate.” And we include our most recent findings drawn from forensic work on data associated with WikiLeaks’ publication of the DNC emails.

We do not claim our conclusions are “irrefutable and undeniable,” a la Colin Powell at the UN before the Iraq war. Our judgments, however, are based on the scientific method — not “assessments.” We decided to put this memorandum together in hopes of ensuring that you hear that directly from us.

If the Mueller team remains reluctant to review our work — or even to interview willing witnesses with direct knowledge, like WikiLeaks’ Julian Assange and former UK Ambassador Craig Murray, we fear that many of those yearning earnestly for the truth on Russia-gate will come to the corrosive conclusion that the Mueller investigation was a sham.

In sum, we are concerned that, at this point, an incomplete Mueller report will fall far short of the commitment made by then Acting Attorney General Rod Rosenstein “to ensure a full and thorough investigation,” when he appointed Mueller in May 2017. Again, we are at your disposal.

* See also our Memorandum for the President of April 16, 2019: “The Fly in the Mueller Ointment”

← COVID-19: Analysis Finds Nearly 1/3 of Owed Jobless Benefits Not Yet Paid
Facebook Singles Out State Media of US Adversaries for a Warning →

26 comments for “VIPS MEMO: To the AG–More on Mueller’s Forensics-Free Findings”