Andrea Germanos reports on the reasons 18 organizations — including the National Press Club, Reporters Without Borders, the Committee to Protect Journalists  and PEN America — are raising alarm. 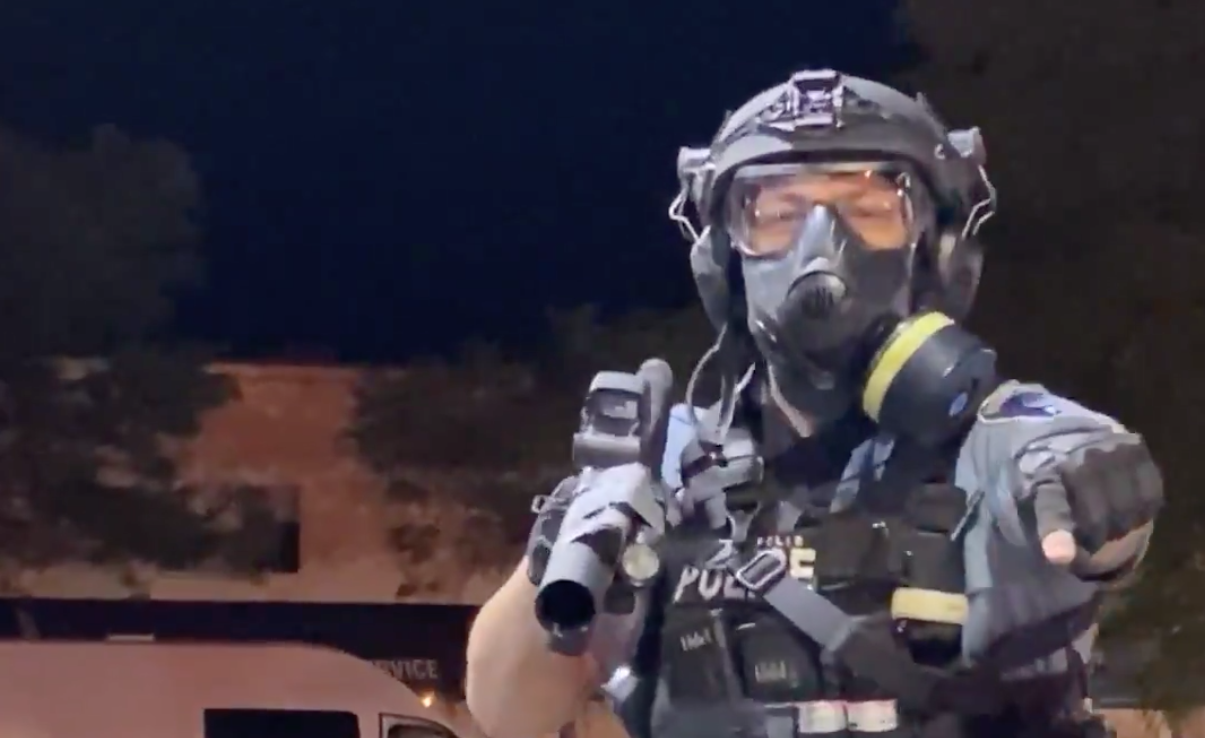 Police officer in Minneapolis gesturing to a news reporter covering George Floyd protests on May 30, 2020, to get on the ground. (Twitter)

Leading journalism groups on Monday urged U.S. police forces to stop targeting members of the media covering the nationwide protests catalyzed by the police killing of George Floyd, writing, “When you silence the press with rubber bullets, you silence the voice of the public.”

The demand comes in an open letter from 18 organizations including the National Press Club (NPC), Reporters Without Borders (RSF), the Committee to Protect Journalists (CPJ), and PEN America.

“Over the past 72 hours police have opened fire with rubber bullets, tear gas, pepper spray, pepper balls and have used nightsticks and shields to attack the working press as never before in this nation. This must stop,” the groups write.

“A few years ago in Ferguson, Missouri, police attempted some of these tactics and they failed. Courts found against governments that illegally arrested journalists and then tried to ban them from their state. It was devastating for Missouri’s reputation,” the letter says.

“Do not fire upon them. Do not arrest them. The world is watching. Let the Press tell the story,” states the letter.

The new open letter came as CPJ said in a statement Monday evening that at least 125 incidents involving violations of press freedom had occurred in the three-day period beginning May 29 in the context of the current social uprising.

“We are horrified by the continued use of harsh and sometimes violent actions of police against journalists doing their jobs. These are direct violations of press freedom, a fundamental Constitutional value of the United States,” said CPJ program director Carlos Martinez de la Serna.

“We call on local and state officials to explicitly exempt the news media from curfew regulations so that journalists are able to report freely,” he added.

CPJ pointed to a new database from the U.S. Press Freedom Tracker, a project from Freedom of the Press Foundation and CPJ. The log has a running tally of incidents during the ongoing George Floyd protests including arrests, assaults—including whether the incident was committed by police and if a weapon such as tear gas or rubber bullets were used—and equipment damage.

Help us track press freedom violations across the US during ongoing #GeorgeFloyd protests!

We are publicly sharing our tracking document so you can help us log attacks on reporters in real time. Comment in the doc to alert us to more cases as they happen. https://t.co/73e9qJ0uLp

Laura Hazard Owen wrote Monday at NiemanLab that “it’s becoming clear that attacks by police on journalists are becoming a widespread pattern, not one-off incidents.”

A number of news reports and videos shared on social media in recent days provide evidence of that pattern.

Police are purposefully targeting reporters all over the country, in video after video. There’s no other way to describe it. https://t.co/HjwdCnQcia

Um, what? This just aired on @ABC7News. pic.twitter.com/tyAQdlsFnf

This video is from 3 nights ago, but remains one of the most disturbing we've seen.

Gas station invaded by police. Reporter complies w/ orders to get on ground. While his hands are up & he is defenseless, police pepper spray him in the eyes.

“I researched countless protests for my first book. I’ve written about many since. I think it’s safe to say that we’ve never seen the widespread, deliberate targeting of journalists by police that we’ve seen over the last few days. Something has changed,” journalist Radley Balko tweeted Monday.

Another organization, Free Press, this week amplified the demand for press safety and said the need for journalists to be in the streets alongside protesters to amplify their perspectives was more crucial than ever.

“It bears repeating,” Free Press News Voices organizing manager Alicia Bell said Monday. “The First Amendment prevents law enforcement from silencing the voices of protesters and from beating back the journalists who seek to share their concerns with the world.”

“Reporters need to turn their cameras and microphones toward the local organizers who have long engaged in the fight for Black dignity alongside those who are now taking to the streets with legitimate grievances against a system that devalues the lives of our people,” she continued.

“This moment underscores the importance of deep relationship building between newsrooms and communities,” said Bell. “Newsrooms must replace police ride-alongs with community-listening sessions and other intentional tactics for shifting power.”

Andrea Germanos is senior editor and a staff writer at Common Dreams.

This article is from CommonDreams.

← COVID-19: Hazard Pay & Why Amazon and Others Are Ending It
UPRISING: The Story of America Crashes Headlong Into the Reality of America →